This was a fairly last minute call, the plan was 3 days in Skye.
Day one was to be pack all my kit on Friday morning, travel uo with my mate John to my Aunts house (40 minutes from the Cuillins).
Day two was to be a biggie, Sgurr nan Eag then on to Sgurr Dubh Mor followed by a trip to Sgurr Sgumain, down towards Coire Lagan across to Sgurr Mhic Choinnich and back to the car at Glen Brittle.
Day three was to be Sgurr nan Gillean then back to Weegie central.
That was the plan...

On Wednesday I was meant to get supplies, but got held on at work, meh, Thursday will do?!
On Thursday, I got held on again and got told my day off on Friday was cancelled, the plan was already looking to be coming apart at the seams.
Friday morning came (after only 4 hours sleep) and off to work again, I updated John with version 2 of the plan, which was drive up after I was done at work and I'd rushed all my supplies and kit together. We eventually got to the North of Skye at 2300hrs, quickly unpacked and set the alarm for 0700hrs on Friday (a couple of hours later than I wanted, but hey ho, I needed sleep by that time.

Saturday morning came and we went to Glen Brittle and set off at 0900hrs, heading round to Coir a' Ghrunnda which is an amazing place. Last time I was there visibility was about 10 metres. Looking up towards Coire Laggan

1100hrs saw a quick snack, a look around and a few pictures. Sgurr Alasdair (anyone know where the hidden chimney is?) The way up to Sgurr nan Eag

It was then time to head up to Sgurr nan Eag via Bealach Garbh-choire this took around an hour and gave fantastic views. We retraced our steps and realised we could have ditched our bags on the way up at Caisteal a' Garbh- Choire, hey ho! We skirted the "castle" to the right but the path split and I wasn't sure whether to go high, middle or low... John had done these hills before but was none the wiser. I decided (wrongly) to hedge my bets and go for the more defined middle road. This took us to 3-4 dead ends where the options were rock climb (no rope) or drop height and go along and back up. Down and up it was, time and time again. It was energy and time sapping. An example of the ups and downs There had been a guide with 3 punters, the easier (but cheeky) option would have been to follow them, but where was the adventure in that? We reached a defined pathe inthe bealach between Sgurr Dubh an Da Bheinn and Sgurr Dubh Mor, where we also met the same group with the guide. My legs were suealing a bit by then and needed a couple of minutes. The route from there was obvious but a bit of scarmbling was required with a wee bit of exposure. The summit was very small but I was happy to have got the first two done. Time was marching on and 4 munros was looking unlikely as the ups and downs while route finding had burned time and energy.

We went back towards Sgurr Dubh an Da Bheinn via an obvious route (now wishing I'd chosen the high road!) and then branched off along the ridge directly towards Sgurr Alasdair. The (friendly and helpful) guide had told us of a hidden chimney that would get us to Sgurr Alasdair from this side, excellent! So we skirt underneath the cliffs of Sgurr Alasdair and go to where we thought we'd been directed. The guide said that this omitted the TD gap. He also said that it was a grade 2 scramble, so if it seems difficult then we were in the wrong place. Needless to say we tried 3 different routes but all were above a grade 2 scramble, I'd say they were rock climbs and we bailed out, unable to get above the belay sling at the top of the TD gap, the hidden chimney remains hidden from me!

Over Sgurr Sgumain and down its chute and joined on to the great stone chute. The time was now 1600hrs, 1 hour short of my turnaround time. I've been on Sgurr Alasdair before but visibility was 10/20 metres, so I was keen to go but John wasn't and truth be told I was keen to save energy for Sunday. So it was time to head back to the car, which turned out to be a good call as John started to feel light headed, so we stopped for food at Coire Lagan.

A quick picture from the journey back to my Aunts

The weather was magic, just the right temperature with no midges but the walk out was still a pain!

All in all it was a magic day even if I only achieved half of what I set out to do.

The Sunday went to pieces as John was burst and reckoned even the shortest Skye walk meant that time was against us. He said it wasn't his legs but he still declined Ciste Dubh in Kintail, haha, I have my own opinion on that as he was nearly having to get help getting down the stairs.

Until next time, which will hopefully be mid October!

This day out is in my top 10 so far. Looks like you had a cracker for it as well

Love the photos and here's hoping for more in October!!

Cheers!
Yeah, it was all good, I'd even happily repeat these and maybe find the correct route! Haha

Great day for it. like the happy to repeat comment. I may find that handy in the future

Not jealous of the weather you got on Skye at all- honest!!!!

What a difference a week makes

Did these 2 a few month a go. After drinking for over 12 hours at a wedding then 3 hours sleep.

What a hard day. Seen nothing

I really must get over that bridge to Skye. Looks stunning

Glad you had a god day for this walk

Magic stuff mate. We need to get out as soon as my injury heals.

Cheers folks.
Jonny/Del, we can do this any time you want! 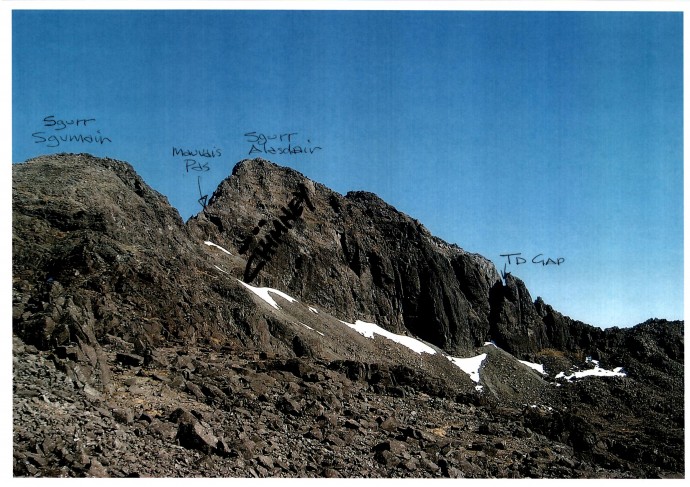 Couple of Photos at col

Looking back down the chimney

Excellent, I'll do that next time.
That confirms what I thought that the TD gap was on the other side.
Many thanks again.

Actually, I should have sounded more grateful...
Thank you for going to the effort to get me that info.
That is the second route I looked at but the top looked blocked, I now know differently.
Thanks again.

If you go onto 'stevenfallon.co.uk', and then hill routes, try south Cuillin. He has photos up there with the route marked in red. Excellent site for info.