I flew up to Edinburgh Airport, got picked up by my mate in the evening and headed north to Braemar, the intention to do something around Lochnagar. Before heading up I was glad I checked it out at WalkingHighlands.co.uk, as we didnt realise there was a well plodded route around Lochnagar called the White Mounth! From the map it looked really good, 5 munros in one hit, in a circuit but also achievable, given the predicted good weather. So, in the SYHA that night we concluded the next day we would aim to do the circuit....

We drove to the carpark the next day at the start of Louch Muick (pronounced Mick?? 308851) to meet up with a couple of other mates who were meeting us there. We took a leisurely pace, and by the time they arrived we didnt start off till 10am from the car park. At this point I was doubtful whether we could do the full curcuit before nightfall...I neednt have worried!

I was surprised how busy the car park was. This was my first time in the area, and it seemed everyone was wanting to go up Lochnagar. A very popular place. When we started walking 2 signposts offered our 2 routes, Lochnagar route first or Louch Muick route, we chose the latter and headed toward the Loch. Track around the southern shore of Loch Muick

Blue skies and not a drop of wind....we knew it was going to be a corker of a day! We walked around the loch with good views of our intended route. Loch Muick and Broad Cairn in the distance

The track was wide and flat. It clung on for most of the way round the loch and then began to zig-zag up to the Plateau. Zig-zag track in the distance

Given that the route starts at around 400m it was only a 250m steep walk up the zig-zag track before the climb flattened out, and the plateau began.

The route looked remarkably easy, we could see the top of BroadCairn, and a "motorway" running most of the way up it! 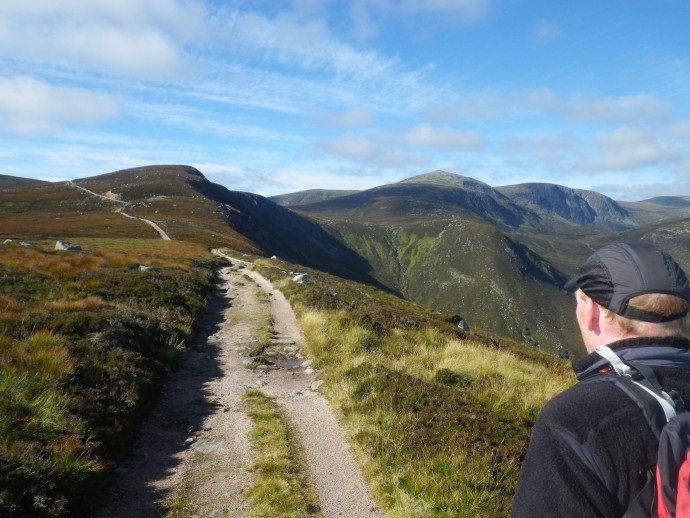 A shed marked the spot where we took the path up to the BroadCairn and after an easy plod, we made the top of the first munro only 2.5hrs after we started off! 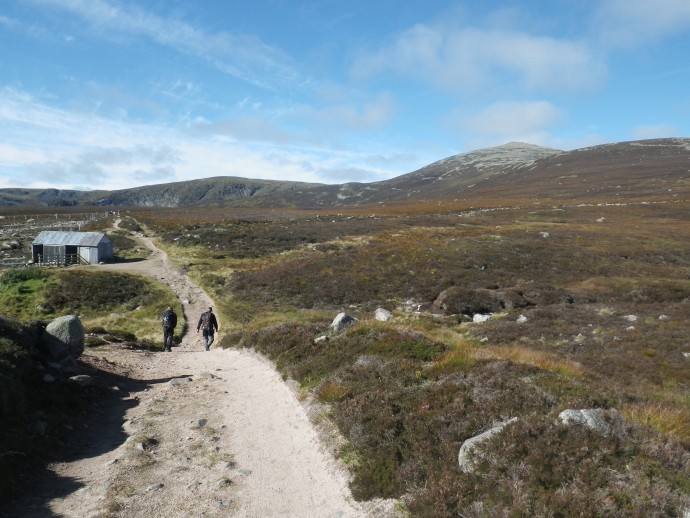 The shed, and a track to the right going to Broad Cairn 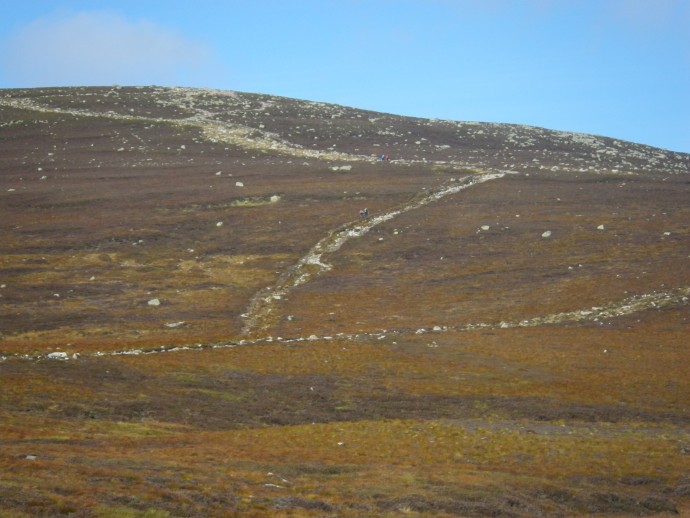 After a spot of lunch, we could see how easy it was to the next Munro Cairn Bannoch, literally no climbing more a dander across and within 40 mins we had reached the top of the 2nd easy Munro. 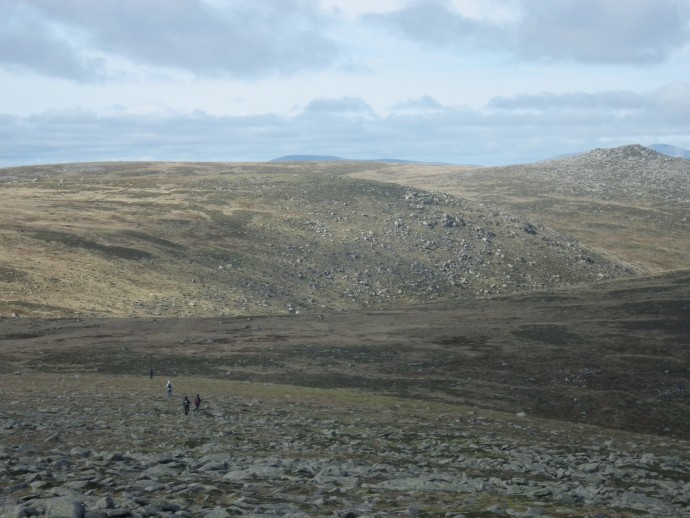 At this rate, we were thinking this has got to be one of the easiest circuits you could do to bag a load of Munros. If you keep your eyes peeled you can find bits of the old plane crash. We found this in between the rocks...not quite sure what it is?? The route to the 3rd Munro again looked like a wee dander rather than a climb. And again within an hour the top of the 3rd Munro was reached. there were 2 cairns here, but I took a photo of the one with the wreckage, which I guess is also from the plane (or a fence !)?? 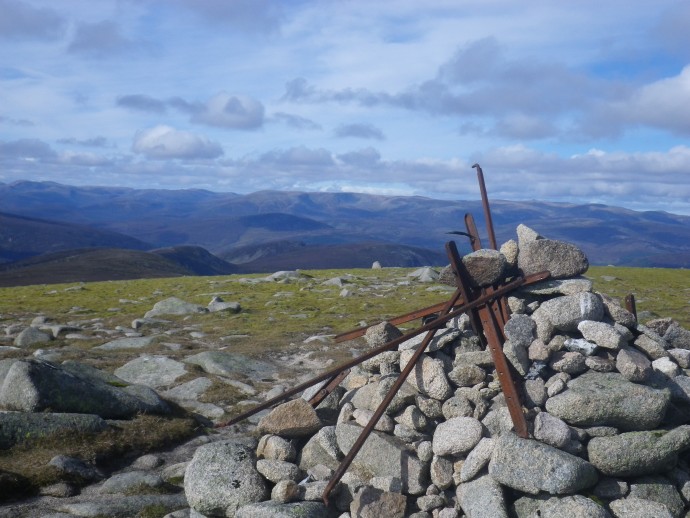 Top of Carn an Sagairt Mor

En route to the 4th Munro, there were hoards of hares running around, they seemed pretty tame....what is a collective of hares anyway? 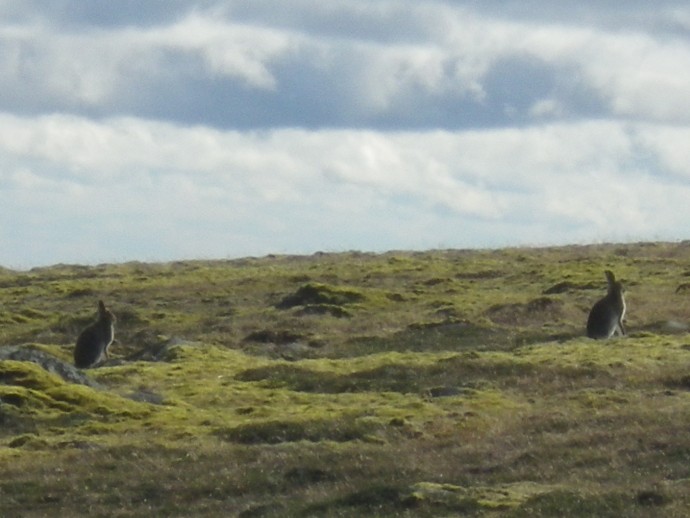 The route to the 4th Munro had a dip and a little climb, but again a track led you up to the top. Once you reach the top of the track, keep walking and a small cairn marks the spot of another path that takes you to the top of Carn a Choire Bhoidheach. Time was good, the walking was easy, the weather was great and we had done 4 Munros! the pic below in the background u can see the route to Lochnagar was easy also. Top of Carn a Choire Bhoidheach

Again within an hour we had reached the top of Lochnagar, and excellent visibility The track follows easterly around the Coire and good stone steps lead down to eh main track that takes you back to the car park. I guess in bad weather this route would have been a bit more of a navigational challenge, but then again becuase you were never off a track, it would be hard to get lost (except in snow and a whiteout of course

So this walk has to go in my list of walks to take beginners up the mountains...there's good tracks all the way, there's no difficult climbing, there's options to go back to the Loch rather than complete the circuit, and you bag 5 Munros in one go! How often can you say that with minimal effort....well if u can discount the 30km walk that is

Thank you for sharing! I am planning them on Saturday but from Jocks Road and they look even easier than I though

Hopefully the weather will be just as nice

Yeah it certainly does make a change! The weather and the gradient were both comforting. It would be interesting to do them as a winter circuit. But u should have too many issues...

I've done all these but not all in one go and reading your report made me want to go straight out and do it!

What a fabulous day you got for it.

Cheers, yeah, it doesnt shout out at you in the map to do them all, but if you look at it, its probably easier climbing the hills than walking down and walking round the loch which is just as long!

Great report, particularly like the second pic of the loch with Broad Cairn above.

Hope you didn't stick too close to the path so that you missed out on all the views of Lochnagar's famous cliffs and corrie though - didn't see any photos of them!

Yeah, i did get a photo, but the sun was round the other side and was in the shade....probably best to do it in the morning 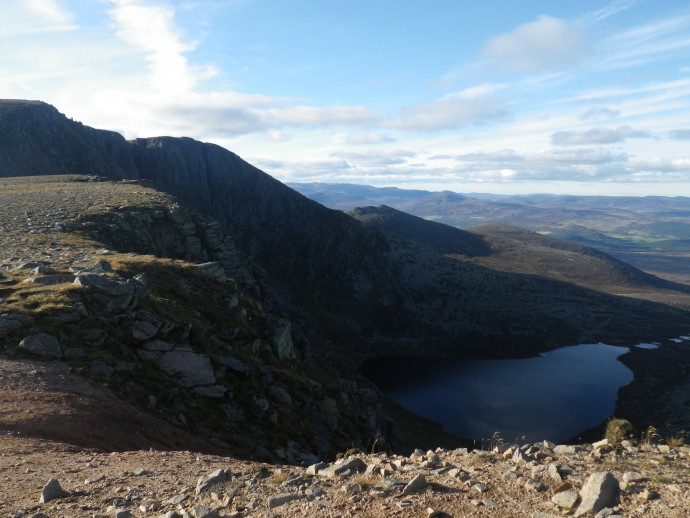 seamus0 wrote:Yeah, i did get a photo, but the sun was round the other side and was in the shade....probably best to do it in the morning

Yea, I caught this int he morning and it looked great in the sun, though we didn't have enough time to do the full 5. Looking forward to going back and lgetting them now!

Aye queenie keeps a well tended estate.. never a stone out of place

Lochnagar is still a good hill.. I always forget because it's the local tourist hill, but then you get there and its affy nice

yup, i think what I'll do is go up it in winter, its that sort of hill will look great. The coire must be impressive with the sun on it.

Crackin day, I was out the day before and got snow at the top of the Gorms. Still got a couple to do up there but planning it from Glen Clova side with the bike.
FYI...I think a collection of Hares is called a "Wig".......

I thought the collective noun was a drove.. slightly dull imo