After dropping off second car at layby on A9 we drove North to start walk at Balsporran Cottage. We had three options available dependant on weather conditions, 1. Two Munros 2.Four Munros and 3. Four Munros and a Corbett. we were hoping it would be the latter if our legs held out as the weather was looking promising. We bumped into 'old danensian' in the car park and were to be leading and following all day. Gavin Russell and myself set of at 0925hrs, in dry no wind to speak of and with all mountains clear of cloud.

Great day was had by all with new frendships gained, whoever said these hills were boring, great views, great company, great fun

For some reason the photographs have been downloaded finish to start, ooooooops! Gavin and Russell at the Balsporran carpark Ready to head to the railway crossing But soon the path is very muddy and wet Higher up we pass of what remains of three cairns, so prominent they were you could see them from the A9, I think the other two were removed about ten years ago After the cairn the route flattens out until we reach the another cairn prior to reaching the summit shelter which is the top of Geal charn, our first munro of the day The first cairn on the summit 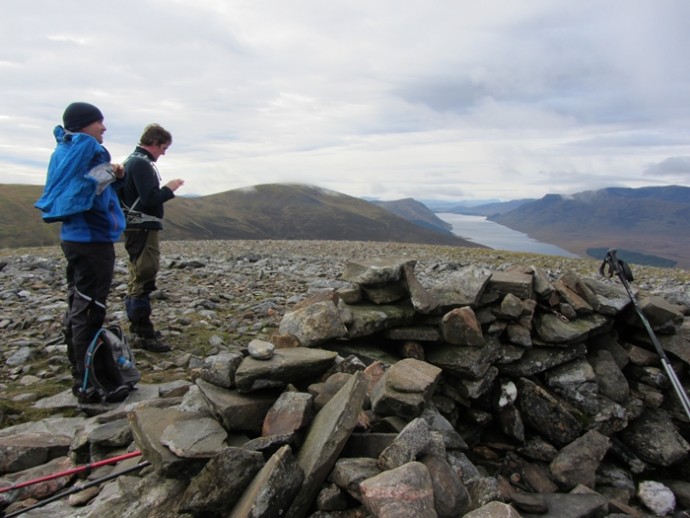 The summit cairn with views down Loch Ericht, and to the North Ben Alder and Loch Pattack and Culra bothy When walking down the South ridge, looking back you can see Ben Alder Lodge on the shore of Loch Ericht Looking down the length of Loch Ericht View South you can see where the next hours walking will take you A'Mharconhaich on the Left and Beinn Udlamain on the Right, with easy underfoot conditions Nearing the crest of the ridge looking North After leaving the rucksacks on the point of entry to ridge, it was easy walking to the Summit cairn shelter Heading over to Beinn Udlamain following what remains of a rusty metal fence line which is followed to the summit. The cloud is starting to drop below 1000m Fine shelter cairn with stone seats and even stone tables to take your cuppa's and foodstuffs. Another meeting with 'old danensian, but did not hang about as it was getting cold since the cloud was down After following the fence posts down to the bealach and turning SE up the NW shoulder of our fourth munro, which was wet underfoot at the start but soon turned grassy with the odd rock until we came to the summit Trig point. The BIG THREE posing for a photograph at the top. An easy descent down a path to the bealach where there was an escape route North to the landrover track in Coire Dhomhain. With the weather still holding we decided to head for the lump at 758m and continue SE to the South of the gully between the lump and The Sow of Atholl The gully between The Sow of Atholl and the 758m top For the descent we travelled North over spongy grass which actually gave a good grip although being quite steep, futher down the face it turned heathery, and even the river crossing was no problem even with the amout of rain that fell earlier in the week The landrover track in the Coire Dhomhain, which took us under the railway and back to the A9 The FRY UP at the Ballinluig that we were thinking about all day, it never touched the sides!!

Cracking day, looking forward to the next wee dander in to the wilderness

Looks like you had a grand day for it , some lovely views . That fry up was well deserved

How was your trip to Monadh Mor?

A long day but worth it , must ask Santa for a bicycle

Well captured Rod - and thanks for the company.

The "great"s must be for capturing the fry-up as well as the photo report.

I must get back to the hills again SOON!

Fine day for it, i did this lot in two outings due to bad weather. Looks a good walk

JC, I did them in two outings over twenty years ago, and to be honest I cannot remember too much about them, although I do remember there was a fair bit of snow on the ground as it was December and January when we did them, but there was not a lot of visibility on either occasion. Thought they would make a good high level walk with views, as it turned out to be. Good day out, took lots of photographs, and burnt off some calories. Also recommend adding the Sow of Atholl at the end, makes the Fry UP taste even better