Mission complete, but not game over!

Mission complete, but not game over!

On Friday, six friends and I set off from Miterdale to climb my 213th and 214th Wainwrights, the two summits above Wastwater Screes.

screes_wh.gpx Open full screen  NB: Walkhighlands is not responsible for the accuracy of gpx files in users posts

We approached Whinn Rigg, passing Greathall Gill on the way. 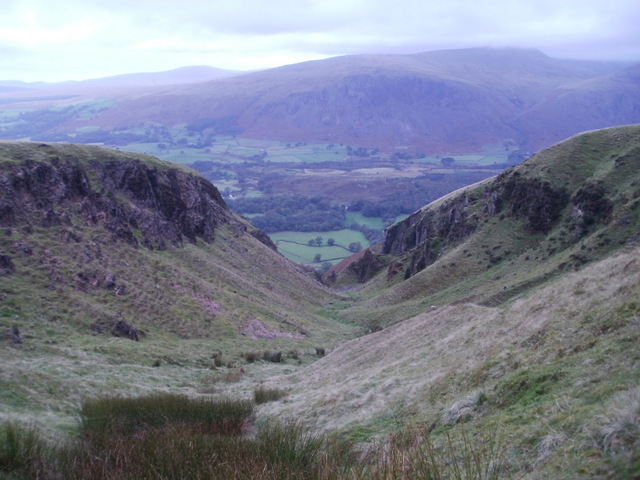 My penultimate top of the round visited, we moved on towards the finish line. On the way there were superb views down into Wasdale. 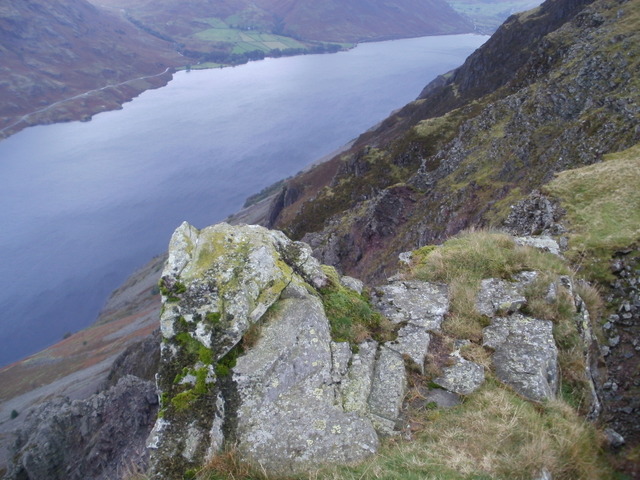 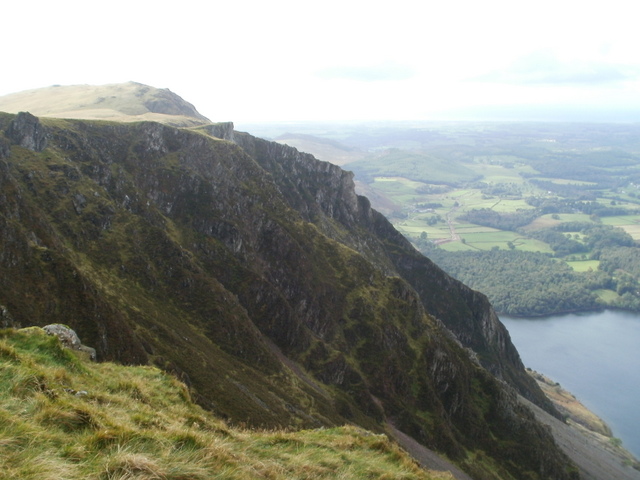 And so we reached my final Wainwright, Illgill Head. 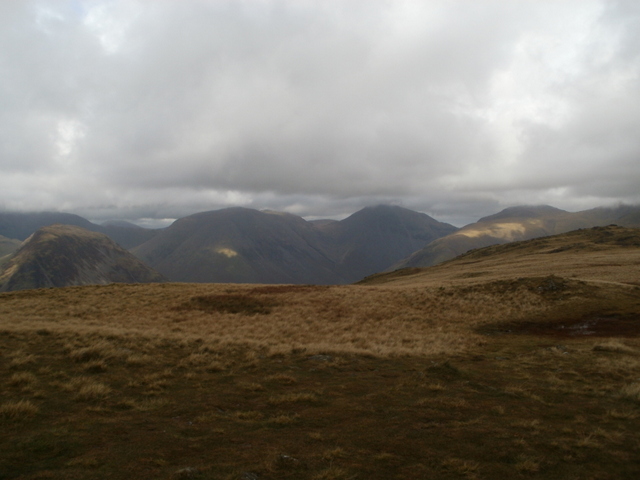 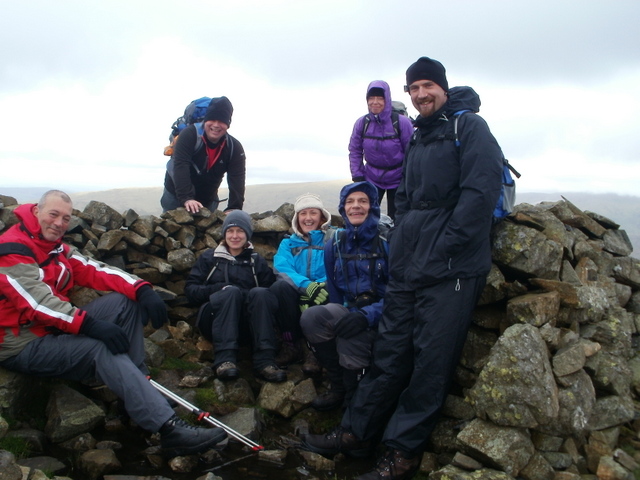 The seven of us, l to r, were JP, Paul, Emily, Trudie, the author, Pam and Peter.

We made our way down, passing above Burnmoor Tarn. 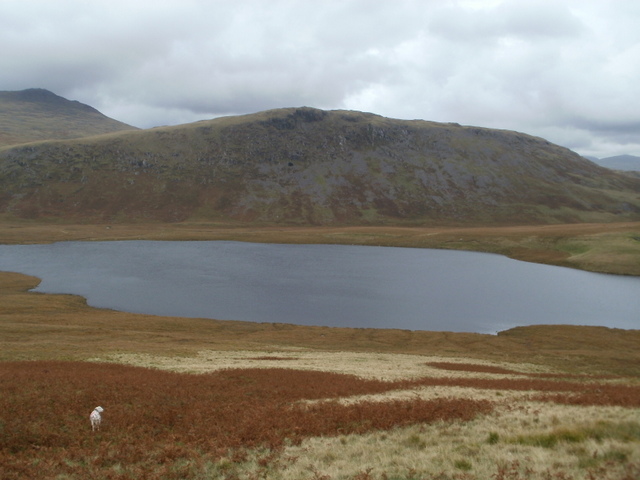 Returning along Miterdale, we were greeted by a welcoming committee of two... 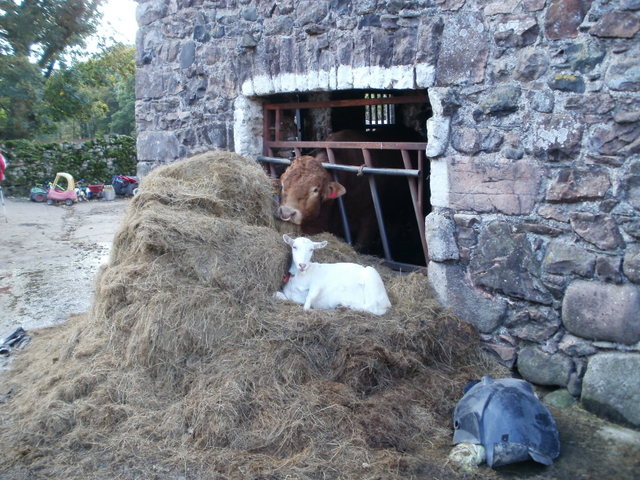 So, job done, and it was off to the Bowerhouse Inn in Eskdale for a meal and a pint or two.

Saturday morning at Wasdale Head, and six of us headed for England's highest massif. 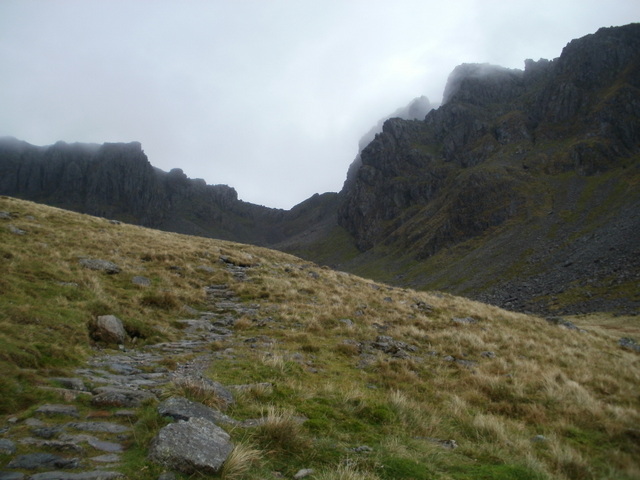 Trudie, Paul and Peter headed for Scafell Pike, while Pam, Emily and I bore right towards Scafell Crag.


scafells_w.gpx Open full screen  NB: Walkhighlands is not responsible for the accuracy of gpx files in users posts

We ventured into Lord's Rake, grim death staring at us from above. 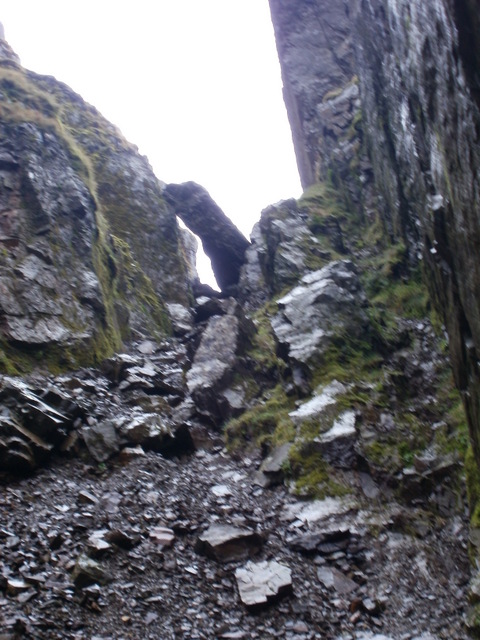 But it stayed wedged in place for at least one more day... 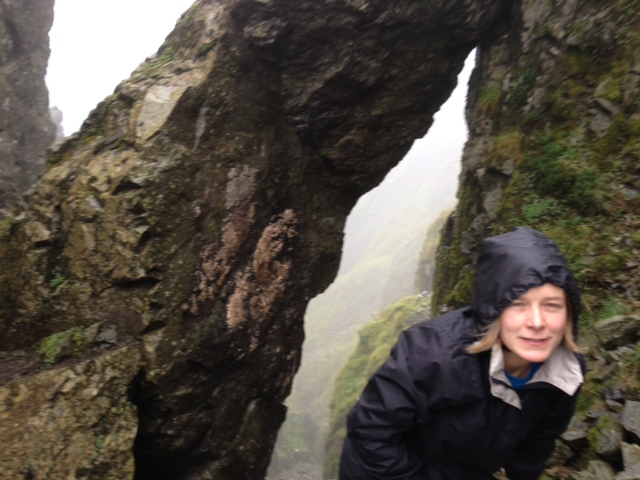 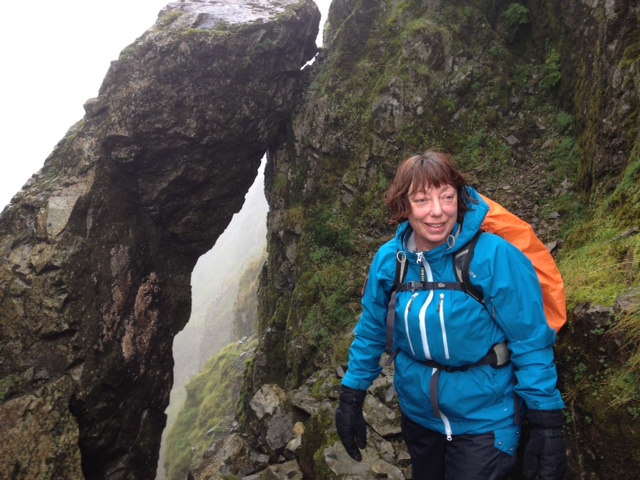 ...however, there is a significant crack low down in that chockstone, and at some point it will fall.

We moved on to Symonds Knott, with fleeting views of Scafell Pike. 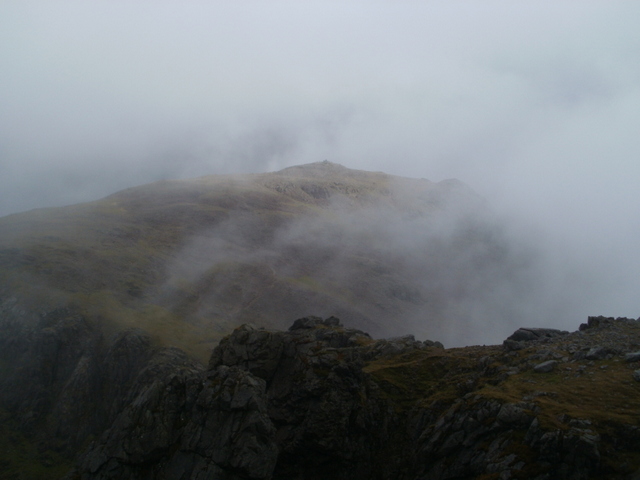 And next onto the summit of Scafell, Emily and Pam's first time here. Conditions were rather wild so we quickly headed down to Foxes Tarn, then descended a wet and slippery Foxes Tarn Gulley. Next we began the slog back up to Mickledore, the Ladies taking a breather. 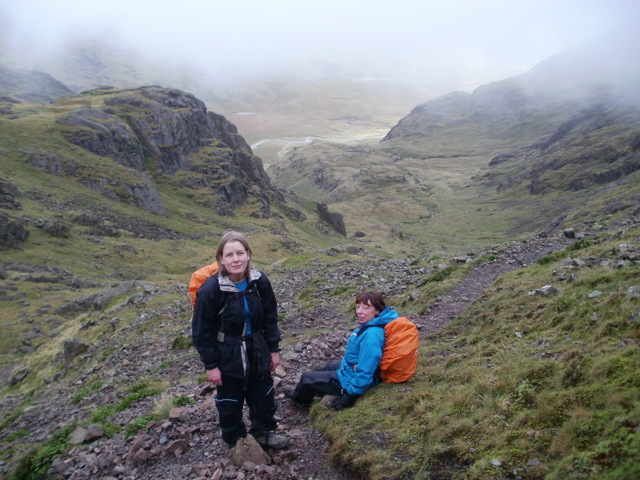 We reached the ridge, Mickledore, looking back at a misty Scafell Crag. 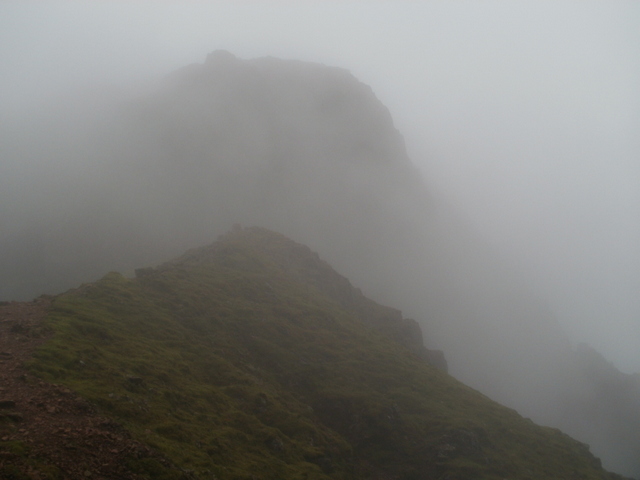 And so we moved on to Scafell Pike. This was Pam and Emily's first time on England's highest, my seventh! 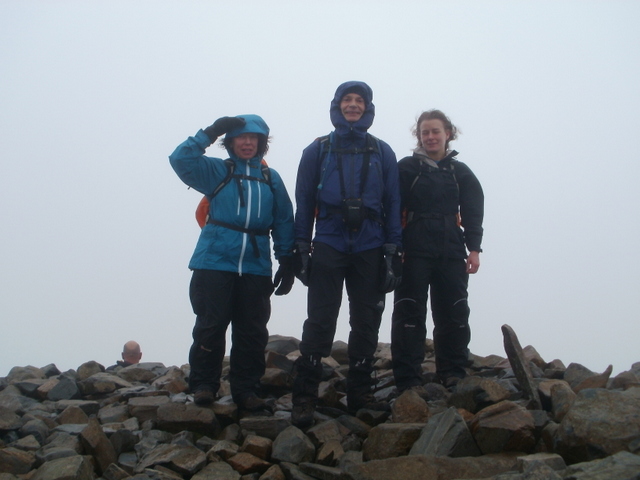 Next we headed for Lingmell Col, hoping we might catch just one summit with a view on the day. We dropped out of the clag and climbed onto Lingmell. There we found what we had wished for, great views including Sty Head and Great Gable. 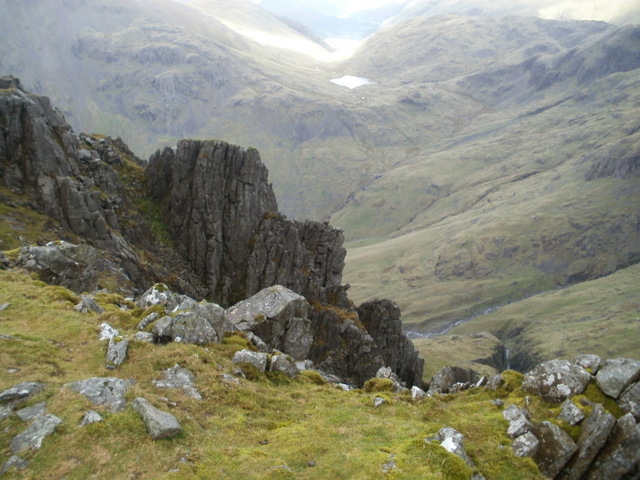 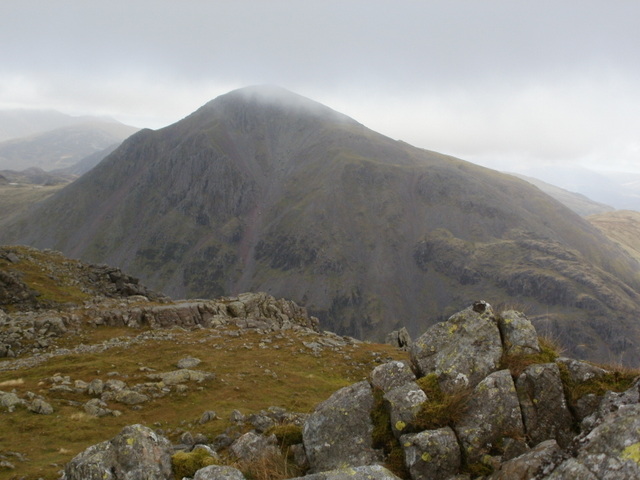 After a short stop we made a direct descent to Wasdale Head. 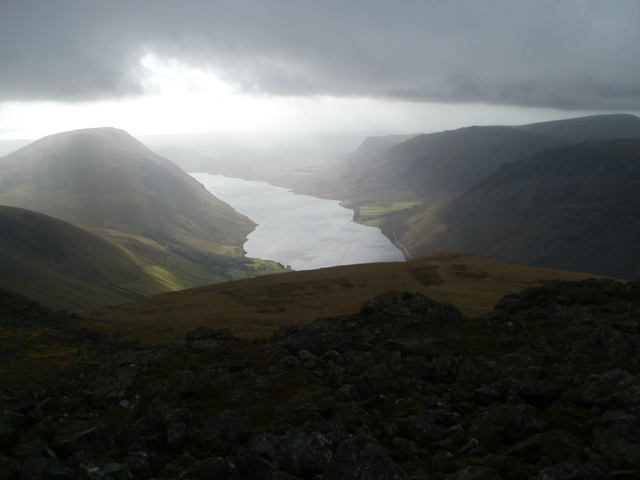 Pam drove back towards our b and b in Eskdale, but on the way we pulled in next to Wastwater, to see that classic view of the screes. And so we looked up at the skyline where we'd been the day before. 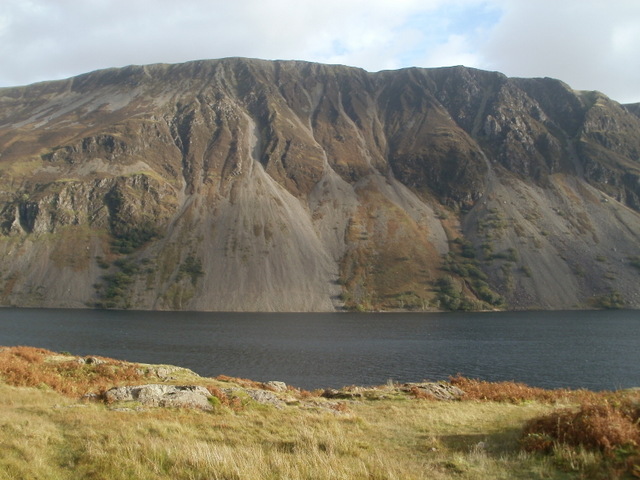 29 September is also my birthday. Back at the Bowerhouse Inn that night, my seven friends, the six hiking companions and Martin, Trudie's partner, gave me a present. It was a tankard with an inscription, congratulating me on completing the Wainwrights. So I must thank them for a very memorable long weekend in the Lake District.

On Sunday morning, during breakfast, one of two little friends we'd seen on Saturday reappeared outside the window. 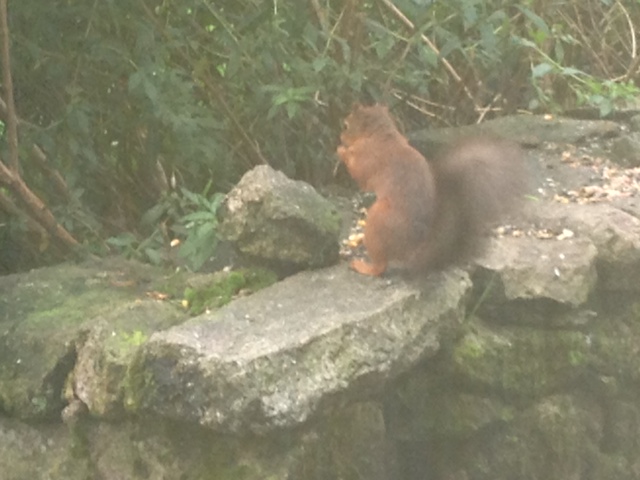 So, the Wainwright round has been finished, but there's no feeling of a lost target or missing the challenge. The mountains are still there, including many in Scotland and Wales I've yet to set foot on. And there will certainly be many repeat visits to Lakeland, probably trying out new and interesting routes.

Glad the weather at least cleared up a bit after a wet start on day two for the celebratory lap of honor/birthday wander .

As you say, there are still so many mountains you can chase, but for now you should enjoy your achievement

Great stuff - looks like great fun despite the weather. Loved heading up the Rake when we did this - at least we did it in sunshine, not sure I or RTMcB would have liked it much in the rain

But Simon - you didn't stop at the Wasdale Head Inn for a proper pint? I'm aghast

Wonderful achievment made all the better with your special company

a good walk to end on with great views. I like the idea of climbing the Pike to cellebrate

Well done Simon and what looked like a great couple of days walking and some great photo's to remember the trip with!! A great achievement!!

Thanks very much, everybody!

Chris, we didn't encounter any bears this weekend, just a few head of cattle of both genders.

SM, the beer's good in Eskdale too. I can't send you a pint of Yewbarrow over the web, but I can send a picture of it. It's the hill on the far left in the classic view of Great Gable from Wastwater: 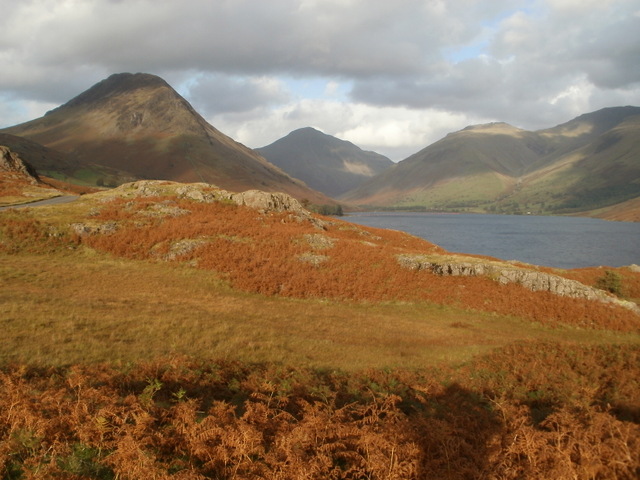 LH, they're a great team. If you fancy a hike some time, there's now 211 of my second round left, so plenty to choose from.

John, England's highest two were very handily placed so it seemed the natural thing to do. Also nice to get some of my friends up there for the first time.

Gary, thanks - it's a trip I'll remember for a long time.

Well Done on completing The Wainwrights, great area to finish.

Sorry I'm late answering, Simo. It's many years since I first climbed hills in the Lake District. But I also did all the 214 between 30 January 2010 and 28 September 2012. During that same period there have also been plenty of repeat Wainwrights, numerous Hewitts and 71 Munros, so it was a busy 2 years and 9 months.

Many congrats on completing the Wainwrights, Simon

Sorry I'm late answering, Simo. It's many years since I first climbed hills in the Lake District. But I also did all the 214 between 30 January 2010 and 28 September 2012. During that same period there have also been plenty of repeat Wainwrights, numerous Hewitts and 71 Munros, so it was a busy 2 years and 9 months.

Great achievement in such a short space of time, you must have plenty of time on your hands, considering how many poor weather forecast days the lakes recieves, especially summer. well done again

Have you been knocking off Birketts as you went? They don't show them here but I suspect your rounds have included many...thought of completing those as well?