Having in my younger days been a keen hill-walker and free-diver, I decided this year was the ideal time to combine the two and do something I'd been thinking about for a while - snorkeling in Loch Etchachan. This wasn't a completely pointless endeavor - having snorkeled a lot of places in Scotland I was keen to see what lurks beneath a high altitude loch. An SNH survey had indicated that trout had been introduced in the past, but had found none, but that otherwise there was very little other than insects. I couldn't find any reference to a bathymetric survey either (but admittedly didn't try very hard) - the SNH report speculated at a depth of around 20 m....

So, I contacted my old diving buddies from previous years - unfortunately they had acquired either children, wives, or additional body weight (or a combination of the above), so were not up for it. Fortunately my wife gallantly agreed to accompany me as chief sherpa.

Set off from home early in the morning (being relatively local), and cycled from Linn of Dee to Derry Lodge - absolutely beautiful September morning (and remained stunning all day). Walking up Glen Derry we passed quite a lot of people heading the other way with large packs. The reason for this became apparent when we got to the Hutchison Memorial Hut at the head of the glen - it's renovation had obviously just been completed and the work party was heading home. Very impressive work - the original entrance (they've kept the weather-beaten front door) is now within a small enclosed porch, and the whole interior and exterior have been completely renovated: lots of new pine cladding). Inside was toasty as the shiny new stove was still warm. Had the privilege of being first to sign the new visitor's book (I hope going snorkeling isn't considered too frivolous by hardened munro-baggers), and shared some crispbreads with some Dutch students (my wife can speak dutch (apparently) and noted that they seemed amused that the food was German). 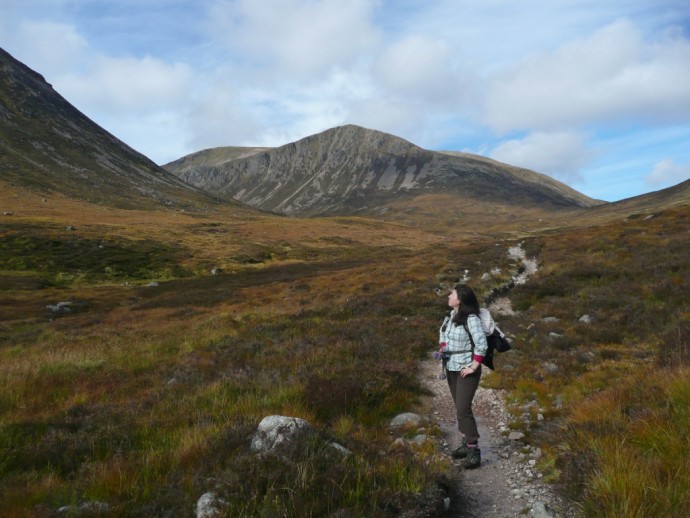 The head of Glen Derry Headed off up to the top of the corrie and got to Loch Etchachan for about 4 pm. The sun was shining and there was hardly any wind (plus no midges) - it also wasn't as cold as predicted by the Met Office - all in all, perfect weather for snorkeling (I'd gone for September as the loch water should be warmest at this time). Climbed into my wet-suit (3 mm); pulled on hood, boots, gloves, and fins; strapped on depth gauge; entered the water, and headed out into the loch. The water was cold, but no-where near as cold as I was expecting (my gauge registered 11 degrees). not getting any warmer...

It turns out that SNH were correct; there is remarkably little life in Loch Etchachan. Everything was covered in a layer of brownish algae, with strands of greenish slimy algae here and there. There was also some aquatic moss. And that was about it; not a fish in sight either (nor were there any crashed Spitfires that I'd secretly hoped would be lurking beneath the waters). However, the loch did have an austere beauty - the water was reasonably clear (the photos make it look murkier than it actually was) and had a bluey-green sheen. The loch sloped down gently, with numerous huge granite boulders, until appearing to bottom-out to a flattish surface at a depth of 6 m. It looked like it probably continued to drop a bit towards the south, but certainly didn't give the impression of being especially deep. However, I probably only went about a third of the way into the centre of the lock (starting from about half way along the eastern edge) so I can't be certain. I doubt it gets anywhere near 20 m deep though. After about 10 minutes my toes were getting rather cold, and as we still had a munro to climb I got out and got changed (wife supplying towels, pants, etc. on demand).

Continued up to the top of Ben Macdui and reached the summit as the sun was dropping low on the horizon. Admired the beautiful views from the top, and headed down to Glen Luibeg via Sron Riach, descending down to the burn by torch (and moon) light. Near the top of Ben Macdui 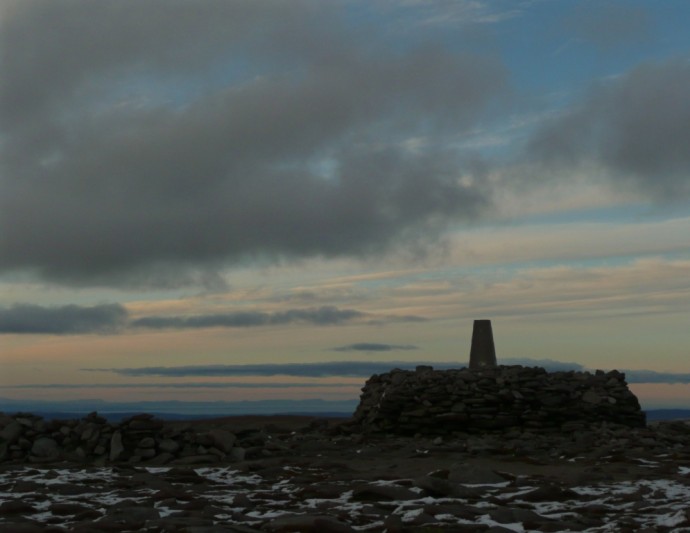 The summit at dusk Looking south(ish) from the summit It was a beautiful clear (and not too cold) night and we soon got back to the bikes at Derry Lodge. My wife had borrowed a powerful cycling lamp off a friend, which made the return trip to Linn of Dee easy. This was in contrast to two weeks earlier when we had cycled back in close to darkness (having set off a bit too late in the day to climb Carn a' Mhaim) - you could see the track but nothing else, e.g. large rocks. This made the cycling quite exciting - as we both have quite decent mountain bikes though it was actually quite fun (at least I thought it was) and we both bounced off the rocks in our path without mishap. However, lights are probably a better option.

Next trip - snorkeling Loch Avon. Will probably have to wait until next year though.

Absolutely brilliant, RR. Thanks for sharing the underwater pics, shame there wasn't anything more interesting down there for you but, fascinating stuff nonetheless.

Was half expecting your report to go on to say that you and the missus had paraglided off the summit back to the bikes!

Look forward to reading about what lurks beneath the surface of Loch Avon.

Excellent stuff , I have often wondered what lies beneath those lochs , slightly disappointed in the lack of crashed aircraft , undiscovered fish species , alien skeletons, or Jacobite gold - but a very interesting bit of exploration . Like BV I am looking forward to your next trip , thanks for posting

Speaking as one of the renovators, it's great that the first bothy visitor was on his way to go and do something as gloriously daft as diving in Loch Etchachan.

Also very informative - thanks for posting.

And modern LED cycle light are great. Not cheap but do a excellent job and the batteries last ages. Done a few pre-dawn raids now including one up to Derry Lodge and they made it a doddle.

What a fascinating and unique report - thank you fior sharing!

I thought from the title this would be a report of a very rainy day, then I read the first line and thought you've got to be kidding - but the pics prove you did it

A great, and novel, report.

11C thats pretty cold! Been diving in the Clyde at 15C and thought that was pretty chilly after 40min...and I had a dry suit! What a great idea to do some snorkeling in the lochs...I guess it would be fun with a wee pony bottle...to look for all that jacobite gold

Gavin99 wrote:Excellent stuff , I have often wondered what lies beneath those lochs , slightly disappointed in the lack of crashed aircraft , undiscovered fish species , alien skeletons, or Jacobite gold - but a very interesting bit of exploration . Like BV I am looking forward to your next trip , thanks for posting

I'm sure there's plenty of treasure down there - I just didn't swim far enough. I did find about a dozen musket balls in a deep pool in the River Dee a few years back near Ballater - I think that counts as treasure. No gold yet though.

You're braver than me then. I went paddling in Dubh Loch last year with my wife. She was quite happy plodging around - I lasted about 10 seconds. I don't enter the water without lots of neoprene!

Cairngormwanderer wrote:Speaking as one of the renovators, it's great that the first bothy visitor was on his way to go and do something as gloriously daft as diving in Loch Etchachan.

If I do any more lochs I'll post a fish report. I've read there are arctic charr in Loch Builg (don't know if you're allowed to catch them though...)


N.B. The Linn of Dee of really impressive underwater (although you obviously need to be pretty careful - I wouldn't go into the top chamber without a very bouyant wetsuit). The carved-out bowls get progressively shallower as you head up-stream. The top one was (I think) only about 2 - 3 m deep, but downstream there's a circular bowl 8 m deep - this is at a point where you can just step across so it's not obvious from the surface. I'll have to get some photos next year...

I heard of some North Sea divers diving the Linn of Dee back in the '80s and have heard a couple of folk who have been there since. Be great to see pictures of that! Ca canny though.

Um, no... that would involve being seriously fit. Very impressive though ... thanks for the link.

Did this walk yesterday. thank god i put the gaiters on some ah the sna would be oor the tap ah yer beets on the summit a Ben Macdui specialy when yer fit sinks in atween 2 rocks

nothing at ah on Derry.

very interesting -perhaps you could devise an aquatic hit-list, maybe lakes above a certain altitude with a minimum surface area and embark on a quest to be the first to swim the "Reggies".