The Glas Maol Round from Glenisla

The Glas Maol Round from Glenisla


This was my first long day on the hills since i dislocated my ankle at the end of July, so i chose a "relatively straightforward" round, taking in Glas Maol, Creag Leacach and the Corbett of Monamenach to get some time in. I did have a fair bit of trepidation, especially after an aborted attempt at the same round on Saturday ending on Monega Hill in gale force winds.

Anyway, after an almost OCD-level of MWIS Forecast checking, I set out this morning. It was an absolutely cracking day, and the drive up Glen Isla as the sun was coming up was sublime. I parked in a rough layby by Auchavan and set off. The start point by Auchavan.

It's roughly a 2 mile walk along the road to Tulchan Lodge, with the signposted path continuing on towards Monega Hill, with some splendid views opening up of the Glen ahead. I duly started to ascend the rough path up Monega Hill. It's usually quite wet in place and today was no exception. However the views opening up behind were excellent, and i was treated to the sight of a herd of deer, complete with rutting stags. 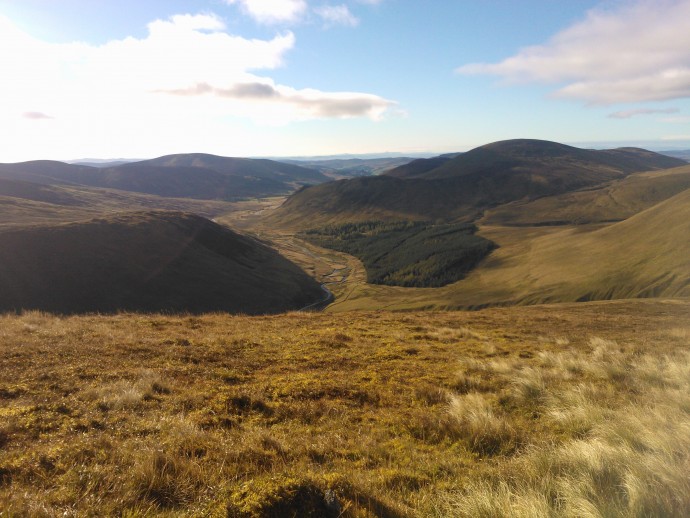 After about two hours and 4.5 miles, the summit was reached. I had a wee break, enjoying a cheese roll, and a ridiculously strong flask of coffee, taking in the views all around. 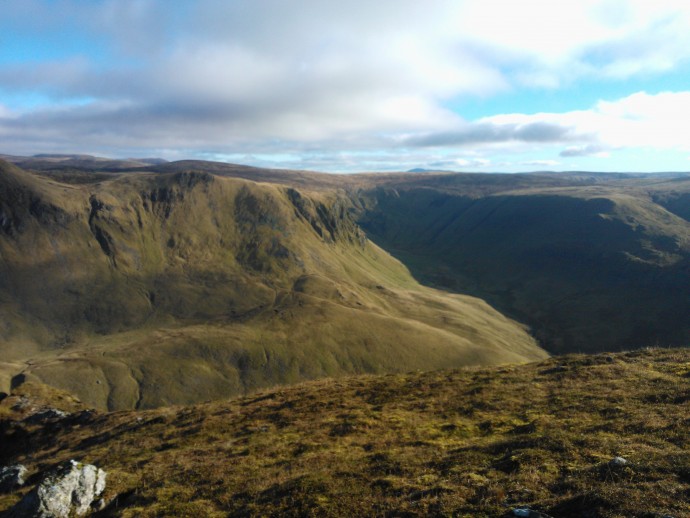 Sitting about was becoming a bit on the cold side, so i set off along the path firstly past Little Glas Maol, then left the path for the pull up to the summit of the munro itself. This wasn't a long or difficult walk by any means. 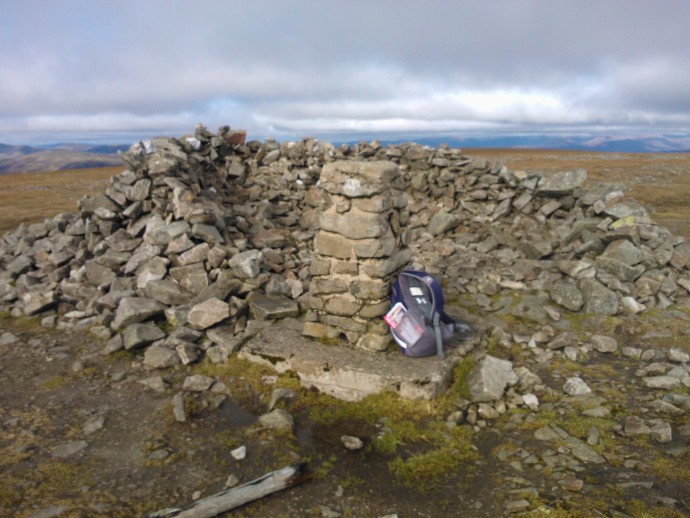 Another quick break here allowed me to take in the initial views of the Cairnwell pass (not great from here) and also to have a look at Creag Leacach, which i was really looking forward to. Making fairly decent time, I set off for the aforementioned second munro of the day. 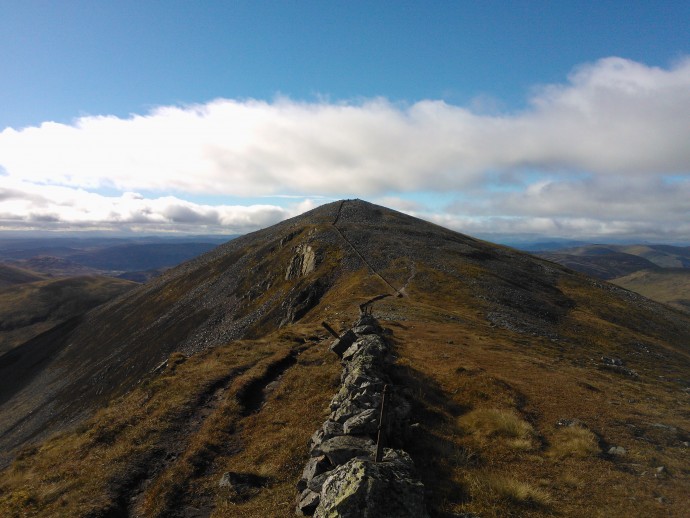 Looking ahead to Creag Leacach

The approach to the summit is extremely rocky and i was fairly concerned about possibly going over my ankle, and therefore really took my time over this one. However it was an enjoyable jaunt up over the rocks to eventually reach the summit, with fantastic views all round, especially over the Cairnwell pass. I stopped here for quite some time taking it all in. After departing the summit, I followed the WalkHighlands route to the South West top, then onto Carn Ait. From here i picked up a trail following an old fence line. This is quite a long and uneventful walk over a couple of small hills to the foot of Monamenach. Black Hill (named presumably due to bieng covered in peat hags) was espescially unpleasant, and indeed i went over my ankle when some grass gave way (thankfully not too badly). I finally reached the base of Monamenach after what seemed an eternity (again follow the track and fenceline). The route description on this site is entirely correct, it's a really brutal ascent after a few hours on the hills and my thighs and calves were almost on fire by the top. I eventually made it to the small summit cairn and took some more (poor) mobile phone pics. This one is a panorama of the day's (well most of it) walking.

All that remained was the long trudge down hill (follow the track down, it will eventually meet with a better track further down, back to the start point). It's also quite depressing when you can see your car but it looks absolutely miles away

All in all, a tiring, but successful and enjoyable trip to bag my 4th and 5th munros, and first Corbett.

A fine round you've done there

. I can imagine even wee Monamenach would be a slog at the end of a long day so well done on not jacking it in

Thanks Leithy. Really enjoyed getting out again, even if i was absolutely wiped out on Monamenach. To be honest there wasn't an "easy-out". Slogging round it would have taken longer, and i'd have been a bit annoyed if i'd backed out of it.

You got some more than decent pictures out of your phone camera!
I too have walked with a dodgy ankle and know the anxious feeling. Well done on your first long day out again!

Thanks! I had a Canon SLR with me as well, and will edit this at some point to get some other pics which will be of better quality. The stretch from the top of Monega to Creag Leacach was hugely enjoyable with terrific views and some cracking photo opportunities.