This is my first go at doing a report, hope it goes ok.
I had not been out on the hills for about six weeks because of knee pains and then the poor weather in November so with the weather forecast looking good for Saturday, I decide to do Ben Lomond as it is only a 30 minute drive from my home, and I walk up it when I have not been on the hills for a while to ease the legs back into action.

I arrived at the car park in Rowardennan at 10am and set off about 10.15am up the usual path of the south ridge through the forest though that has been chopped down a fair bit this past two years. On gaining height the views all around were excellent with the Cobbler in the distance toped off with snow and low lying mist to the north east and across the loch. I forgot to take my camera, though because I have done the Ben numerous times I usually do not bother but with the great views all round, I was annoyed with myself until I remembered that I had my mobile with a camera. 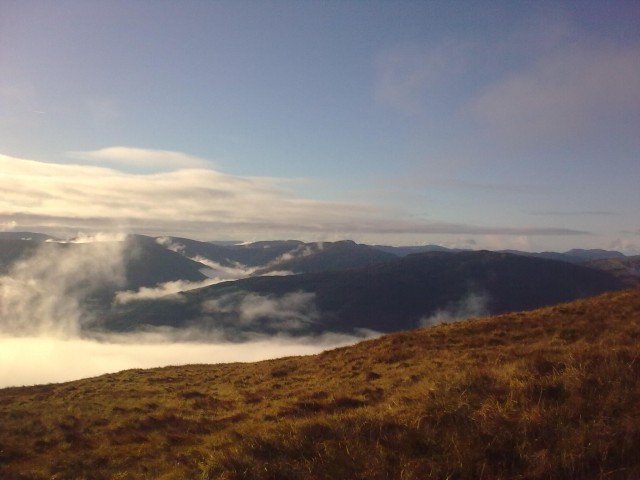 On reaching the level section higher up the summit ridge came into view and it looked as if it had a dusting snow, though I was to discover later that it was deeper than it appeared and it was a good 6-8" deep in places and where there was drifting it was up to my knee when I stepped off the path. On reaching the summit the views were excellent and took photos of the Northern Coire and summit ridge then my battery packed in on the mobile. I saw the the Ben in a different light with the snow, good views and no wind. Headed back down the same route that ascended and was glad that I got out for a few hours on the hill.

Looks like a fine day out ~ with excellent photos for a mobile phone.