The forecast for the day was great - 80% chance of cloud free tops so probably one of my last chances of the year to bag a couple of Munros - I usually head to lower ground in the winter and return again in March.

I decided to make an early start as as much as I love hill walking...............Barcelona v Real Madrid had a certain appeal so time was short.

Arriving at Linn of Dee at 7AM it was great to be able to take my time and not have to worry about the midges - it's been a hellish spell for anyone using this car park over the last few weeks!

Also, a pleasent surprise, the sound of a rutting deer in the woods. I couldn't see it but I had started to wonder over the last few years if there were any deer left in this area. What a fantastic and eerie sound, especially just at dawn.

The first section up to Derry Lodge is one that I sometimes think about cycling (due to the number of people that fly past me most weeks) but always finish up walking. It's a bit under an hour to Derry Lodge and it's a nice flat and easy start to get the legs going. Derry Glen has to be one of my favourite parts of Scotland and I just love walking through the pine forest while anticipating the hills ahead of me. The first rays of sunshine on Derry Cairngorm

Once you leave the Glen Derry track there is a narrow, steep and fairly boggy track which fairly quickly leads on to the open lower slopes of Beinn Bhreac. Derry Cairngorm from the lower slopes of Beinn Bhreac

It's a fairly quick walk to the summit of Beinn Bhreac and the track seemed to dry out the further up the hill you go. 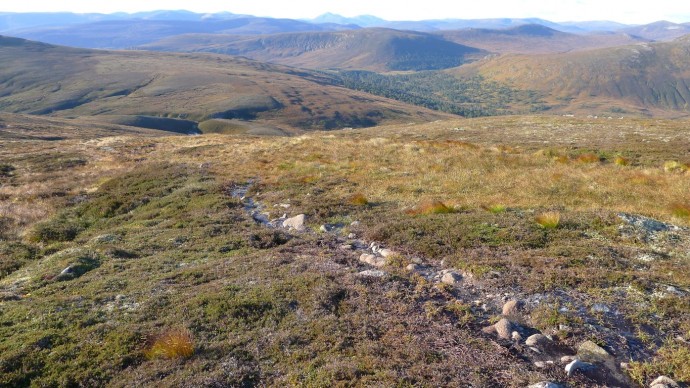 The view back down to Glen Derry

The track seems to take you naturally towards the west top so a quick check of the map told me to head over to the east top which is 4 metres higher. Beinn a Bhuird to the east - think this could be next for me! 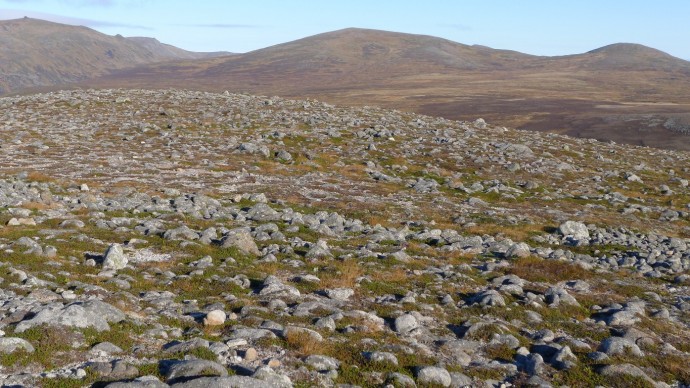 Beinn a Chaorainn (Centre) - my next target

It's a bit less than 2 miles between the two Munros but it takes longer than expected as it's a bit of a bogfest. At least the weather was kind as after a heavy frost the ground was crisp which helped with keeping dry. There are a lot worse bogs around but it's just a bit slow and frustrating. Beinn a Chaorainn - it's getting closer...

I decided to head towards the eastern slopes as I was heading down the west side on the way down and it was good to reach the lower slopes as the ground was drier and although I was climbing again it was more fun. Summit of Beinn a Chaorainn The view to Beinn Mheadhoin Ben Macdui with a dusting of snow on the top

At the summit I was chatting with a chap and as usual we were talking about the Munros we had done and I was asking for a recommendation for a Munro with great sea views (any suggestions are welcome!!) when to my surprise he pointed out that we could see the sea from where we were standing and he then pointed out two oil tankers in the Moray Firth - OK they were only dots on the horizon but I hadn't realised what I was looking at in the distance.

Time to head for home, down the western slopes to link up with Lairig an Laoigh and then back down Glen Derry. The View down to Glen Derry

There are some scree sections which are probably best avoided, sadly I didn't heed my own advice and had an exciting ten minutes as it felt like I was taking a ton of rubble off the hill as I slid down quicker than I intended. Once back on level ground there is a good track down Glen Derry and it's back to covering the miles quickly. I stopped at the bridge over the Derry Burn for more pics. Taking the track down the west side of the burn there were more photo opportunities. Looking back towards Derry Cairngorm

From here it's a short walk back through the woods to Derry Lodge and suddenly there's a few more people about after a very quiet walk (I'd only met a couple of people all day). For the last hour of the day it was time to get the walkman out and listen to a bit of REM and The Stones as I headed back to the car park.

Brilliant day, I really enjoyed these two hills and as I mentioned earlier, if anyone has any suggestions about Munros with good sea views, please please let me know!!