A thrilling climb of one of the Lakeland giants, and then a tramp around its less distinguished foothills…

blencathra.gpx Open full screen  NB: Walkhighlands is not responsible for the accuracy of gpx files in users posts
From Scales, the path contouring the feet of Blencathra’s south ridges is pretty and obviously well-trodden, but actually quite testing – only a really awkward scramble over wet rock takes you out of the little gorge after a tricky hop over Scaley Beck. Unusual to find the hardest bit of a climb only 200m up, but definitely the case here! The rest of the walk along to and up Hallsfell ridge is terrific though. A good path wends up to the ridge over its steep butt, and then you can pick between a comfortable bypass path or a practicable enough traverse of the crest of the rocky ridge – the latter is definitely recommended, challenging and painstaking- going but never as difficult or exposed as it looks; you stumble out at the very summit quite suddenly and rather sooner than you might expect. Towards the top of Doddick Fell over Scaley Beck Above the beck crossing 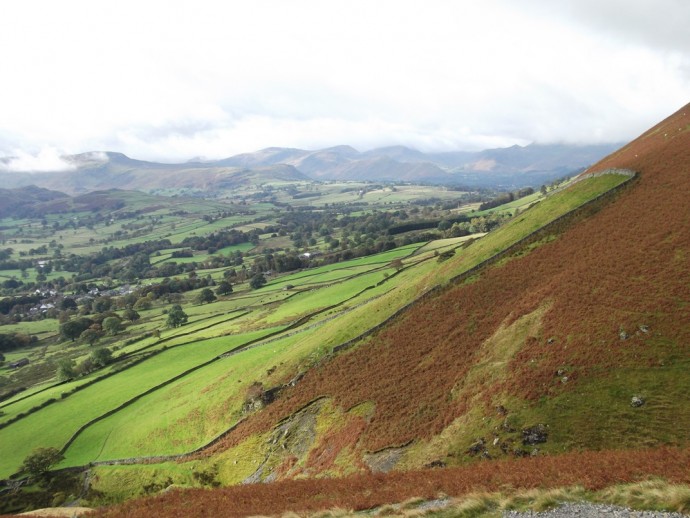 South-west from the start of the ascent of Hallsfell 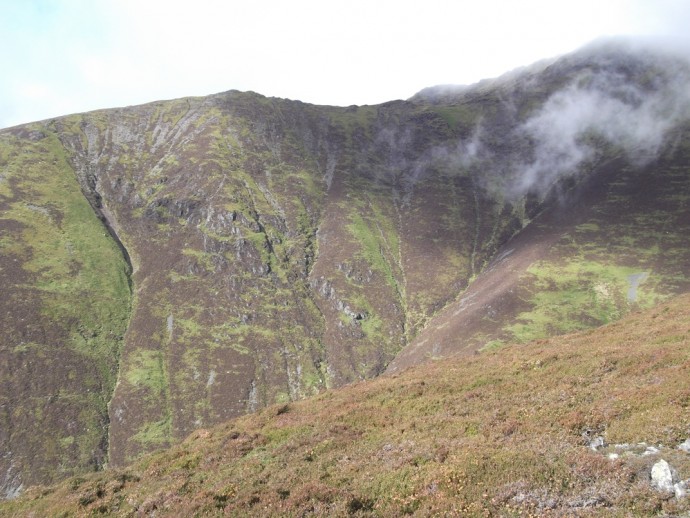 The face of Gatesgill Fell 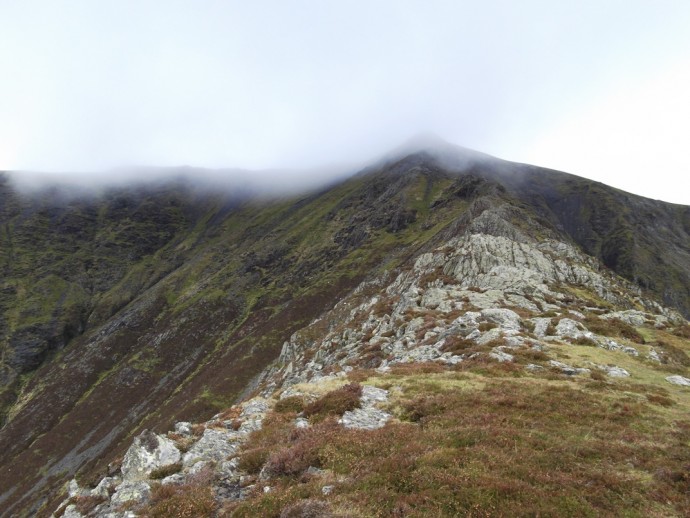 The summit in mist from near the start of the ridge 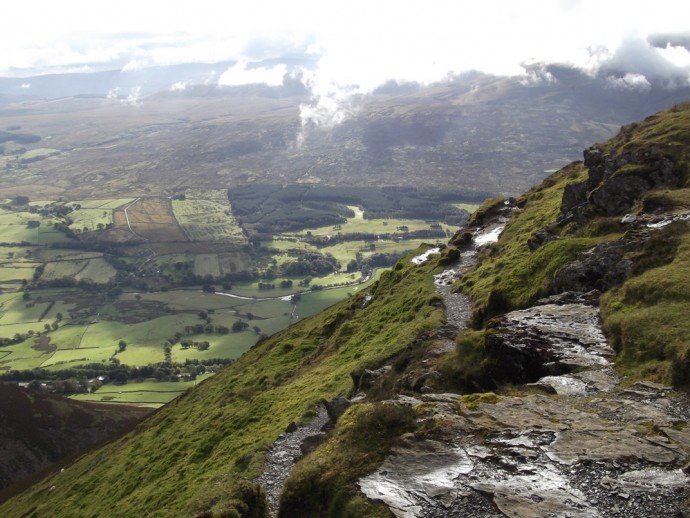 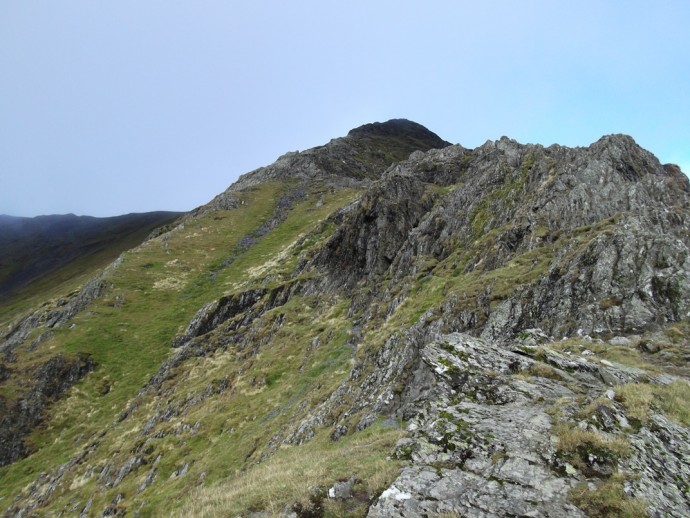 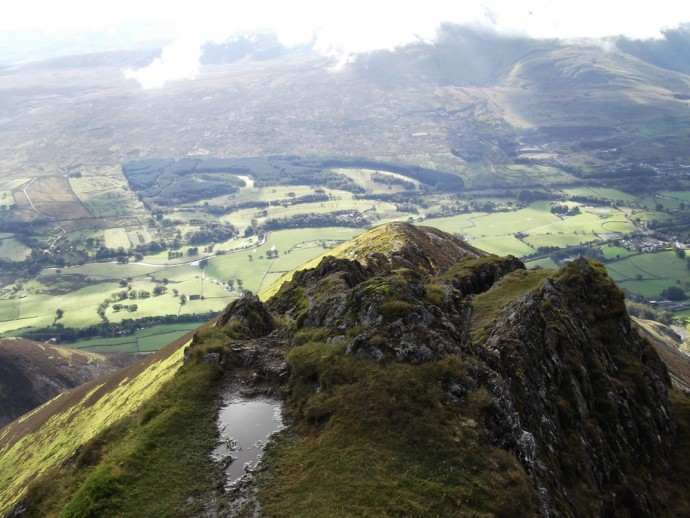 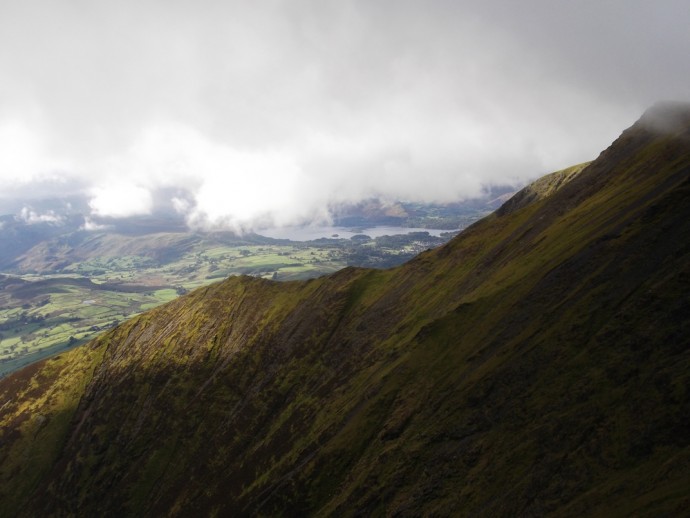 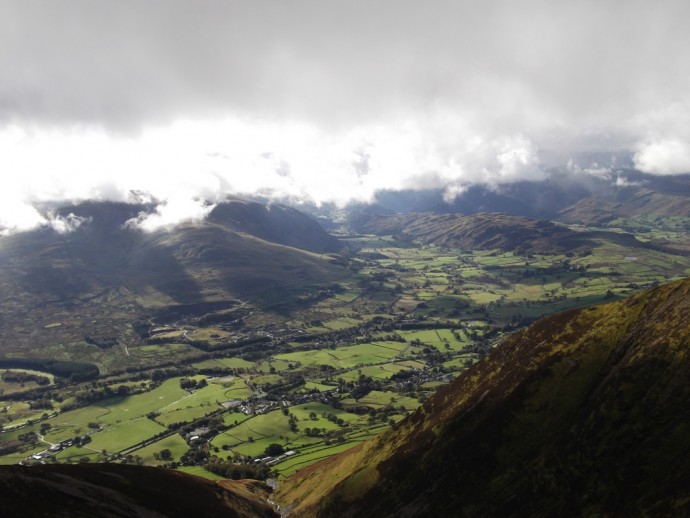 It’s a sudden change of terrain here, clear of rock and onto a grassy plateau with Blencathra’s many subtops stretching either side and broad and damp-looking moors ahead to the north. Great views from the start of the onward route, down to the tarn below and of the profile of Sharp Edge: plenty of bravehearts there seemingly scampering along the crest before crawling up the fiercely steep-looking slope at its end – many might think otherwise, but it would be hard to say that this looked a tempting prospect… 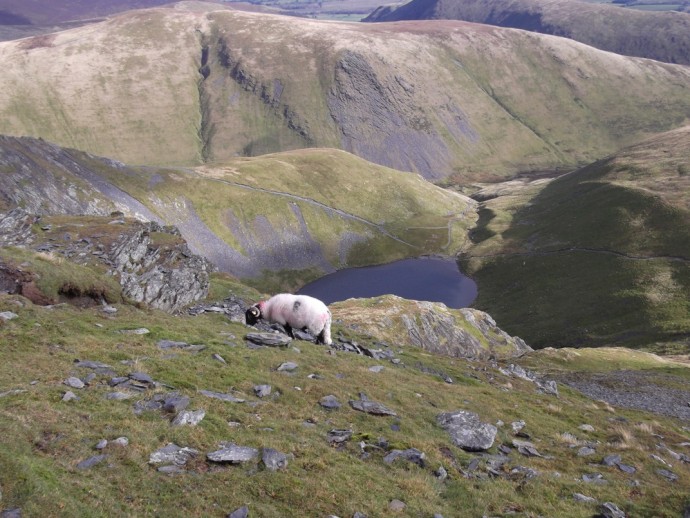 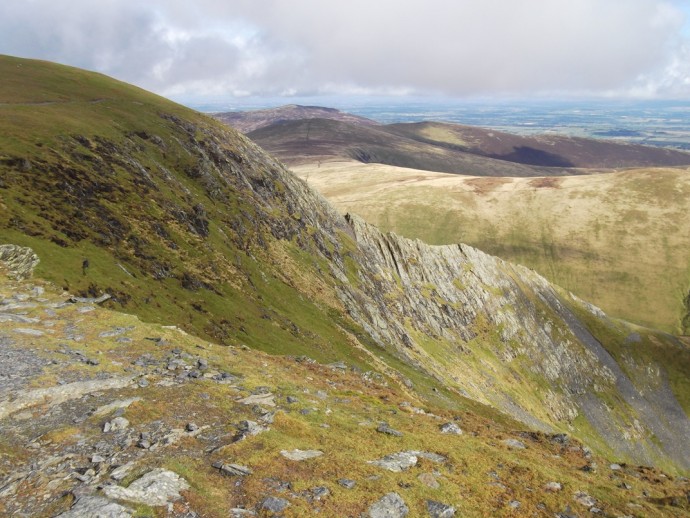 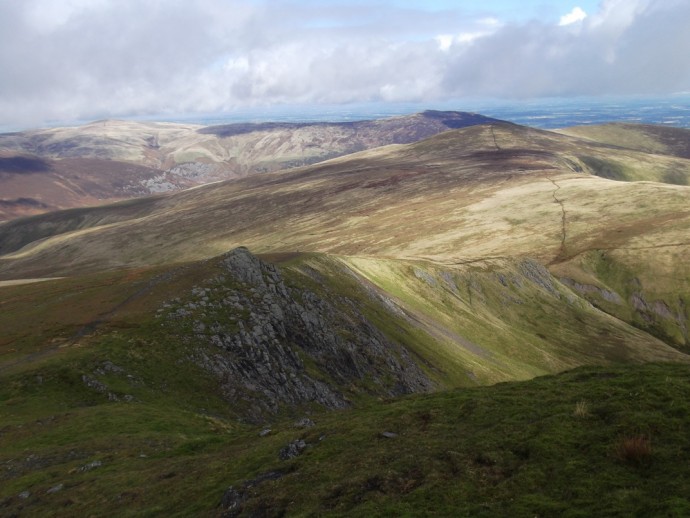 The path to Bowscale Fell, with High Pike and Carrock Fell behind

Somewhat anticlimactic and pretty marshy tracks/boghops head around Bowscale Fell and Bannerdale Crags, although views of the clear paths snaking up the valleys to both offer a glimpse of what might be their better sides. The sight of even the gentler face of Blencathra holds the eye throughout. 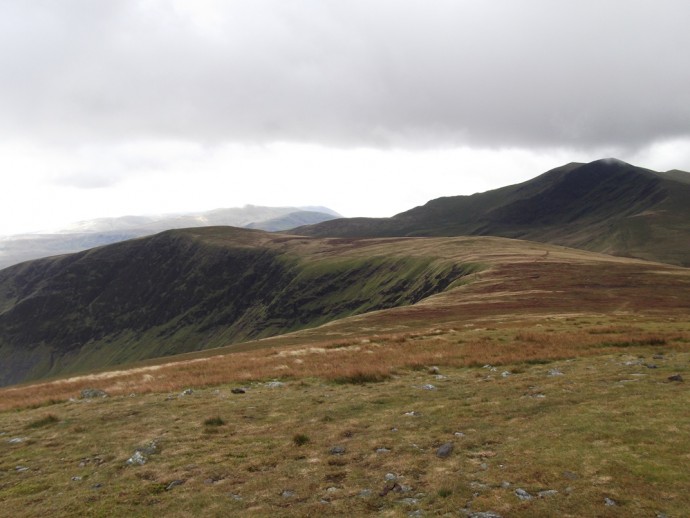 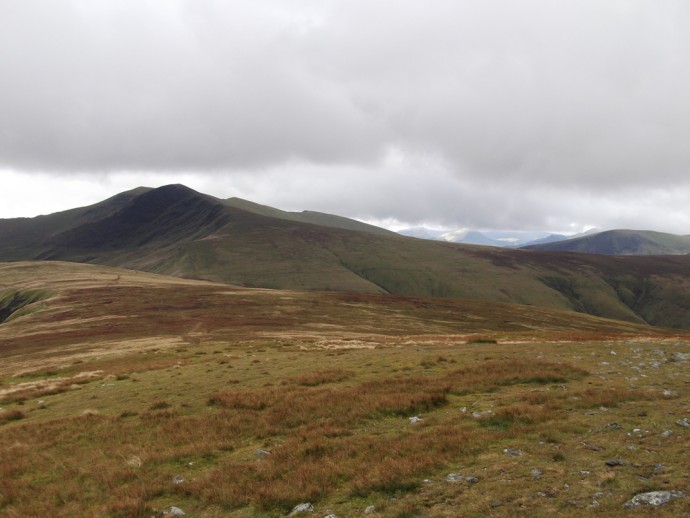 …and, the four main tops in view, with Lonscale Fell right 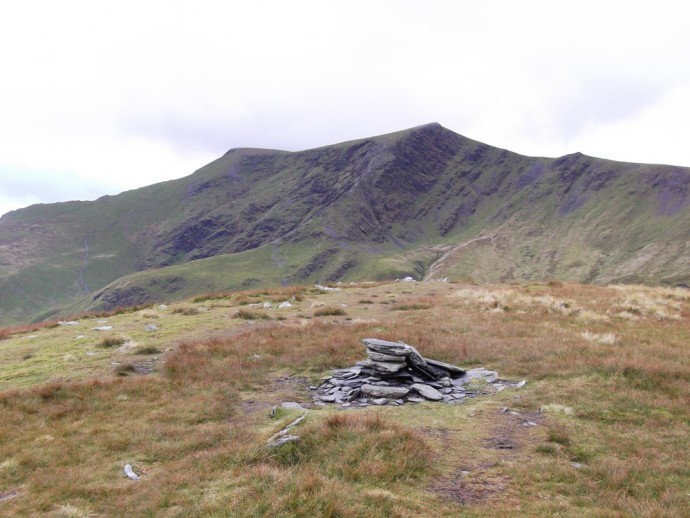 A narrow but obviously well-used path (so eroded that you risk knocking knees against its edges much of the way) heads along the Glenderamackin valley, past the highway up to Scales Tarn and over craggy zigzags back to the start. Plenty of sights along the way of the many other enticing routes to the top of a mountain that you almost immediately feel like climbing again. 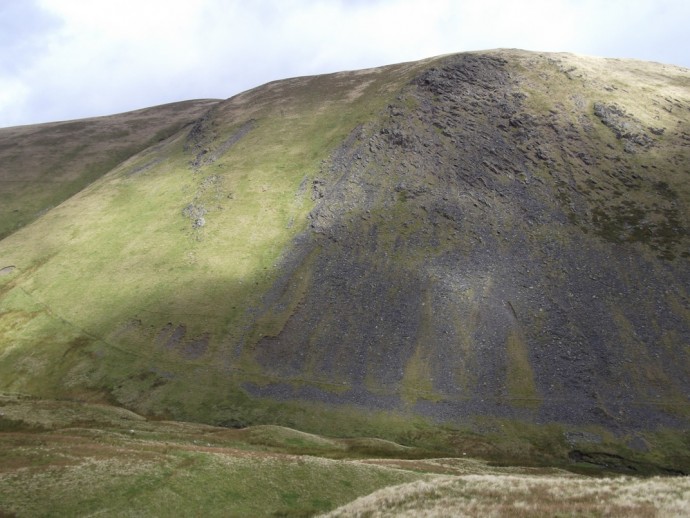 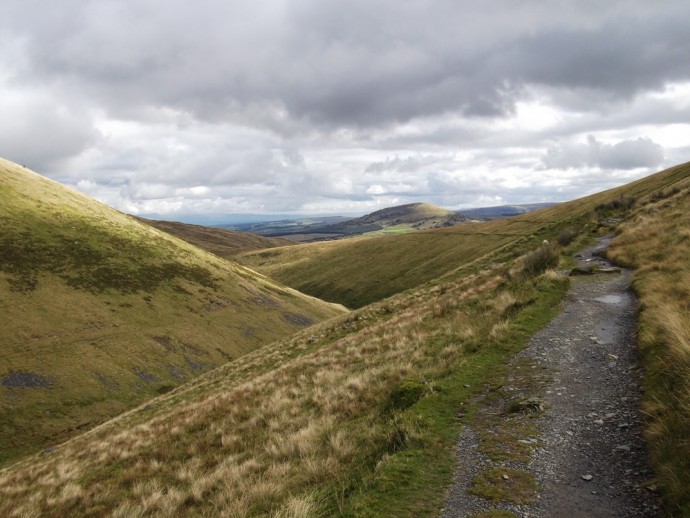 Head of the Glenderamackin valley 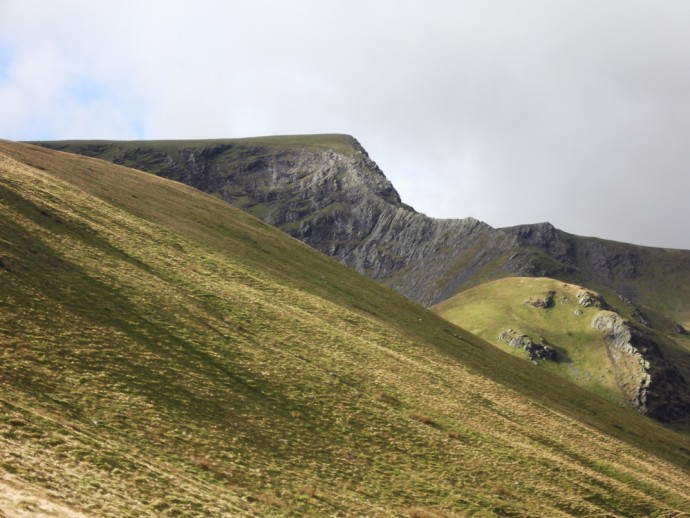 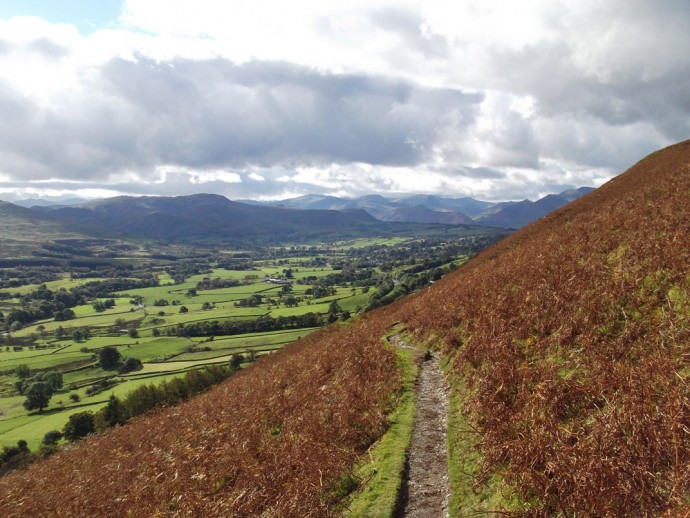 Some cracking photos there, Poppiesrara. As I'm hell-bent on finishing the English/Welsh Hewitts at the moment, I really miss doing old favourites such as Blencathra. Might have to do a few days in the Lakes sometime soon to remedy that

Did you not fancy Sharp Edge? It's not as bad as it looks ... just make sure you don't stray too far left on the climb after you've crossed it as you can quickly get into trouble

But as long as you just follow the grooves upwards, you should be ok.

Another real cracker P with some beautiful photos, the shot of the 'Head of the Glenderamackin valley' looks so real I could almost walk into it. Great to see a bit of good weather making an appearance too

A nice wander there Pop and some really nice photo's as well. Each time I read a report about Blencathra makes me want to have a go at it more now!! Roll on next month!

Looking to do Blencathra by Hall Fell ridge when we return (figured a great walk is required to offset the pointless lump of Mungrisdale Common). Glad to here it's not too scary. I can vouch for the Eastern side of Bannerdale Crags and Bowscale Fell having some great walking. Best thing is still the view of Blencathra however

Thanks all! A lovely walk - probably my favourite Lakes peak (so far...).

Red Peak - Sharp Edge is a 'maybe never'! I like a scramble, but the balance isn't quite there for knife-edges on slippery rock - I manage to slip or stumble on most walks; bruises and embarrassment fine, Mountain Rescue jobs, probably not... Trying hard to make cowardice sound sensible there!