Ever since we have been visiting Skye, we have always wanted to climb Ben Tianavaig. We imagined the view across Portree Harbour to be something special. This walk wasn't going to disappoint.

We parked at the beach where there is room for 4 or 5 cars and were getting ready to go when Rick realised that his jacket was still hanging up in the cottage. Fortunately it was only a 30 minute return journey to fetch it and we finally set off around 1130am.

Walking up the road towards a post box, we carried on up a driveway and turned off at the path with the small sign marked Hill Path. You have to jump to get up the small hill and ditch, but once over we climbed along a small path lined with Rowan Trees. We went through a couple of gates and eventually turned to the right and started heading along the edge of the hill, gaining height quite quickly. The views of the bay below and the Cuillins straight ahead, with rain clouds lingering around them looked quite spectacular. 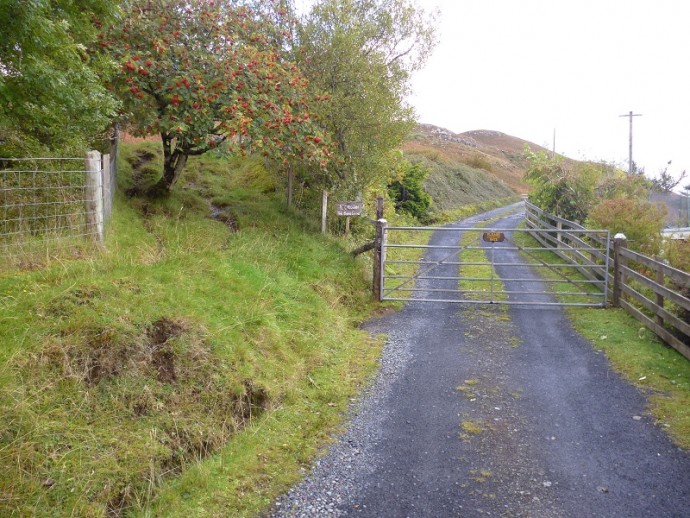 The path to the left heads up hill Cuillins in the mist

We walked past two tors before beginning the climb towards the summit by the third and last one. It was quite easy to find a way up as there is a single person path right through the heather. Eventually we reached the edge of the cliffs, with splendid views of Raasay right in front of us. 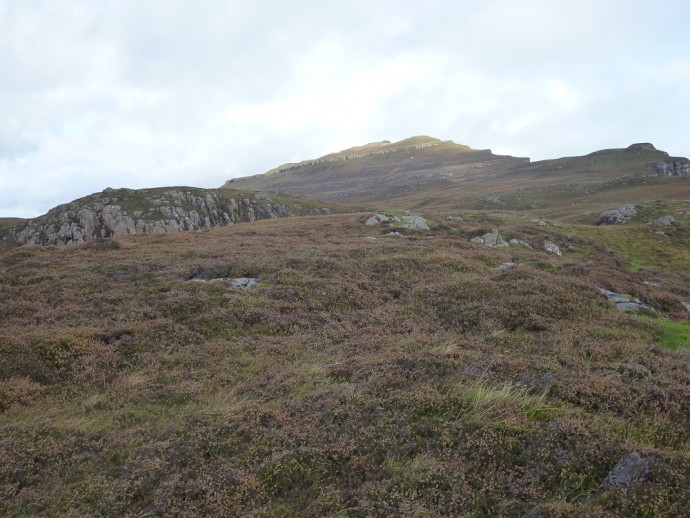 The path heads out onto open moorland, with cliffs on the right, and we set a course straight up to the trig point, which we could see easily the higher we got. The Cuillin clouds were getting closer to us, so we stopped and got dressed up for winter, (jacket, waterproofs, beanie, gloves), and carried on. The wind was bitterly cold by now, blowing across the water from the Cuillins. We reached the summit and as we did, the heavens opened and driving rain hit us from behind. We seeked shelter behind the trig point, there is a lower bit which offered protection, and grabbed a bite to eat as the rain came and went and the cloud started forming around the summit.

As if by magic, the cloud then lifted and the sun came out and bathed Portree in light, allowing for some photos of the Island capital. As Rick was taking the photos we heard a commotion in the skies and saw two birds fighting. A third bird joined in and we realised that we were witnessing a Sea Eagle chasing a Golden Eagle, which then became the hunted as a second Golden Eagle joined in and chased the Sea Eagle away. The two Golden Eagles then headed across the water towards Raasay, but must have seen us and turned back and put on a show for us flying right over our heads and gliding gracefully around the hill. Getting photos in the wind was hard, but Rick snapped away hoping for some to turn out. One of the Eagles And the other one This one circled us quite close by

Looking back towards the Cuillins, we saw the next rain band sweeping in, and raced back down the hill in record time. The rain was pelting us all the way down, it actually hurt. As we got back to the Rowan Trees, the clouds parted and the sun came out. Back at the car park, as we were changing, our Golden Eagle friends put on a show for us again. Wonderful birds indeed. As Annie once sang, here comes the rain again

Fantastic views for minimum effort on that Hill. Must be one of the best sub 2000 hill there is.

johnkaysleftleg wrote:Fantastic views for minimum effort on that Hill. Must be one of the best sub 2000 hill there is.

Indeed, although Brimmond Hill in Aberdeen is even less effort for a magnificent view of Aberdeen and Bennachie.

The wee Sub2ks allways make great viewpoints, i for one think they're great for short days out and just as satisfying as climber the bigger ones.

Can't imagine that the encounter with the eagles is a very common occurrence and what a setting to see it in. The inclement weather has yielded some good phtographs for you too so you must have great memories of this walk and cold and painful rain somehow makes for a more evocative report than plain old sunshine!

litljortindan wrote:Can't imagine that the encounter with the eagles is a very common occurrence and what a setting to see it in. The inclement weather has yielded some good phtographs for you too so you must have great memories of this walk and cold and painful rain somehow makes for a more evocative report than plain old sunshine!

This was one of the best walks ever. The rain was pelting us on the summit, then it cleared to provide some amazing views. The Eagles were amazing too. Brings a smile to our faces just thinking about it.

Brilliant photies. You could see my croft from there, and the house I used to live in, in Portree. Ah, the homeland... I am currently off the coast of Israel, and pinin' for the fjords somethin' terrible....

Great to see the golden eagles Rik and a sea eagle, fantastic birds

Fantastic pictures. We were up there today but the cloud was down low over the higher hills. We saw what we didn't dare hope could be eagles but having seen your post I'm now more optimistic. They were a good distance away . We did see Red Kites , however, so that was a real treat. Even saw one at the foot of Glamaig as we were driving home

Don't want to disappoint you, but your first photo looks very much like a raven to me rather than an eagle.

That aside, great report! Looks like an amazing walk with stunning views!

Users browsing this forum: No registered users and 175 guests