After some more or less rainy days in Torridon we had moved on to Ullapool and on Sunday, 13th July 2008 we saw the chance for a real classic! The BBC morning news forecasted showers along the north west coast from 2 p.m. on (without internet access we couldn't have a look at a proper forecast), so we entered the supermarket some minutes before 9 a.m. to buy some bread and water and at a quarter to 10 we reached the car park 250m east of Dundonnell hotel (there was only one car when we arrived there, whereas the car park at the start of the other route near Dundonnell house had been quite crowded when we had passed it).

And off we were, accompanied by blue sky. Unfortunately we didn't notice where the old path up the ridge left the newer path round to the Allt a Mhuillin, so we ended up on the latter path - this seemed to be the more popular route and it wasn't too boggy taking the rain in the days before into account. At a quarter past 12 we rejoined the other route near Sron a Choire and caught the first glimpse of the main peaks of An Teallach.

At 12.55 we arrived at the summit of Bidean a'Ghlas Thuill, the first munro of the day. The views towards Sgurr Fiona and the pinnacled ridge was absolutely breathtaking (even more than the steep climb which was behind us)! We could also enjoy the views into the other directions as there were only some high flying clouds. As we were not the only ones on the summit we had a nice chat with a young Scottish lady and a couple from Northern Ireland (if I remember correctly) who were walking in the opposite direction - one of those international "gatherings" we like so much in Scotland. They told us that the pinnacled ridge was not too bad even if they normally find exposure to heights quite scary.

Despite of that we didn't change our destination which was Sgurr Fiona. We arrived there at a bit after 2 p.m. having taken the direct and steep route along the ridge which was alright for us. The summit was fairly crowded but we found a place for lunch where we could also enjoy the views all around. Suilven in the north was recognizable very well, and Ben Hope and Ben Loyal even further north could also be seen. Somewhere in the south there was Beinn Alligin which we would have liked to climb in the days before, but this will have to wait till another year.

Sooner or later we had to walk back the route of ascent. We noticed a group of five other people who bypassed the summit of Bidean a'Ghlas Thuill on the way back. They walked along its slopes and stayed at a height of about 900 metres, but I don't know if this shortcut is to be recommended. At a quarter past 4 it started to rain, but when we arrived at our car at half past 5 our waterproof clothing had been dried again.

To sum it all up: a great day and an extraordinary walk which I will remember a long time. 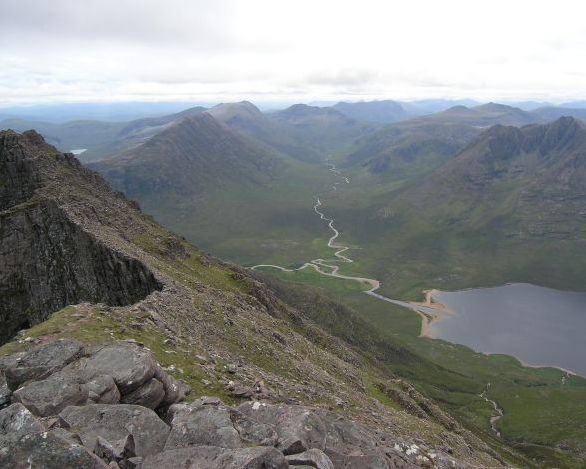 view to the south from Sgurr Fiona a steep but not too intimidating climb 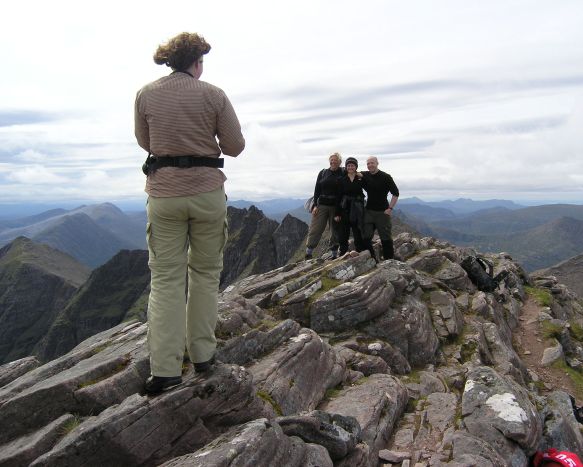 Enjoyed your description of An Teallach, possibly Scotland’s finest mainland Mountain, with a great shot looking up Gleann na Muice.
Definitely a hill to save for a good day weather wise, if that’s not asking to much in Scotland.

That's a wonderful looking mountain. Probably a bit beyond me at the moment

If you go the way Dirk went I'm sure you'd make it. The mountains in the Northwest mostly look very different to the southern Highlands, but an ascent to the main summits only of An Teallach isn't really so much harder than elsewhere (though it does start at sea-level). When I first started hillwalking I was very intimidated by photos of mountains like An Teallach in the books and thought I'd never be able to do them.

Great discription of my favourite mountain. I like the route starting from the other end and going over Sail Liath then over Corrag Bhuidhe to Sgurr Fiona then onto Bidein a'Ghlas Thuill before coming down near the Hotel and getting a cool drink. Have done this route numerous times in all different conditions and loved it every time.