Two middle aged men.........and a hot date with some Sisters

Two middle aged men.........and a hot date with some Sisters

When seen from the Ratagan Pass they look simply majestic

Yet, as I was to discover, they do not yield easily. Sisters they may be, but they clearly have high standards if you are thinking you can impress them. Personally I think they maybe were just humouring me – a mid-forties old codger

Although they didn’t disappoint on the views front, despite the weather early on looking like it wanted to keep them under wraps

This was also to be the walk I emerged from the “nervous 190s” and hit the double 100. In the end though I was just glad to get out of these Sisters clutches alive

I was joined again by Stuart, although we were both complaining of bad nights sleep the night before. Not the best preparation for this walk me thinks. Otherwise planning was scrupulous and we arrived at the Fort William McDonalds just after opening for breakfast

Suitably “nourished” we were parked up and walking just about 9 a.m. In hindsight probably a late start, as we had seriously underestimated the test that these “birds” were going to set two men of a certain age

The plan of action. Park up at Morvich and walk into the back of the Sisters via Gleann Lichd. At the Glenlicht Lodge we would then make our way into An Lapan and up onto the Bealach an Lapain. From there it would be a hop, skip and a jump along the ridge and back to the car

Can you hear those Sisters laughing

There would no hopping, skipping or jumping

Glen Lichd. A lovely approach to the start of the ridge walk back to the car. Given the curve in the ridge this approach solved the problem of needing two cars or thumbing a lift back along the main road at the end of a long day

As an approach it was a decent length, but not too long, so gave a good warm up before the hard work started. It was also pretty flat, so not a big energy burner (that was to come

. And aesthetically the views were pretty good too 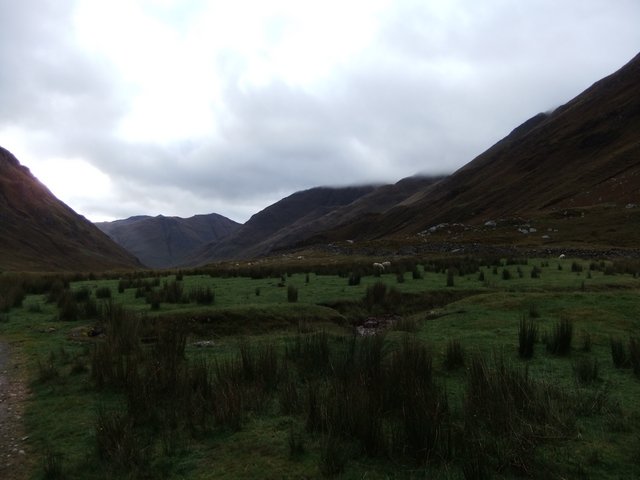 Looking into Gleann Lichd at the start of the walk in 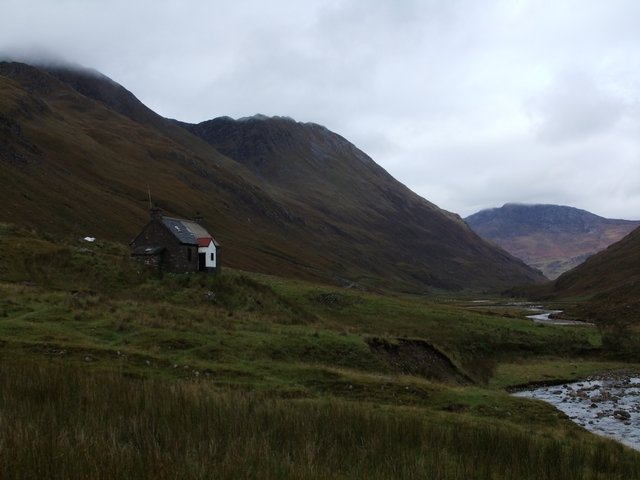 We were joined toward the end of this section by a fellow walker who caught us up on the way. Mark, from the Isle of Wight. Up in Scotland for a few days walking. I think he may have overestimated our capabilities as he asked if it was ok to walk with us for a while. All well and good on the flat, but he was way fitter than us, which was evident for all to see when we headed into An Lapan and the real work started

An Lapan (aka bog, bog and more bog 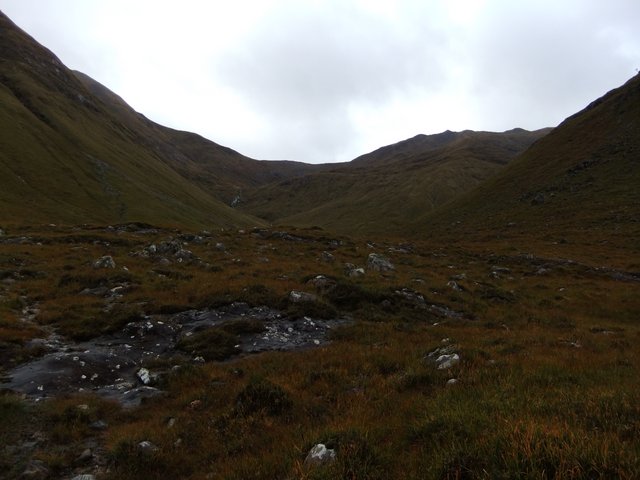 The path from Glenlicht lodge was reasonable to start off with, albeit it was boggy. I knew the path would likely deteriorate and eventually disappear higher up. But man, was this section hard work

I must say I was a bit miffed at one point when our walking partner, Mark, asked me “You’re not going to peg it, are you?”

Now, I may huff n puff up these hills, but I didn’t think I was that bad

Soon after our lack of speed was tell as Mark took his leave and sped away from us – leaving Stuart and I to toil up onto the ridge. By the time we hit the bealach we were shattered 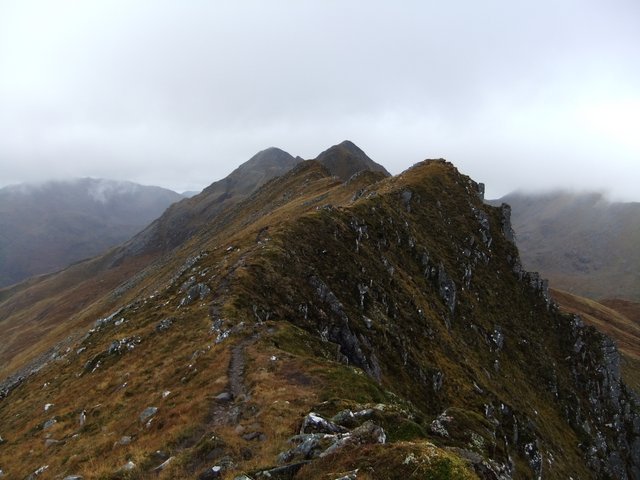 Ah, the ridge at last. Looking toward Spainteach

Took so long to get to this point the cloud had decided to come down and we were now looking at the prospect of the Sister’s being all coy on us. But I lived in hope that they would show us a bit of flesh as the day went on

First challenge was to get passed the Sisters guardian; the Spaniard, Sgurr nan Spainteach. A fair old hike in itself, as we made our way up over a number of minor rises and up onto the summit. At the top Stuart remarked how long we’d been walking for, yet we hadn’t even got to the first sister yet 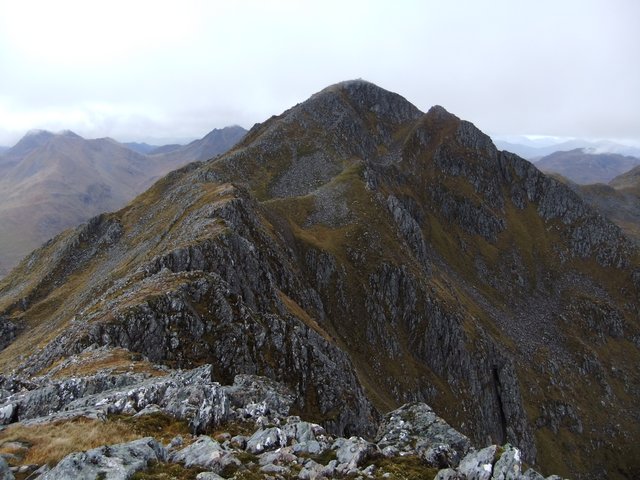 I spy with my little eye - a Munro.
Sgurr na Ciste Duibhe at last

Having got to the top of Spainteach you’d think it would be plain sailing from then on in. But the Spaniard has a sense of humour. While he gives you a good view of his charges he doesn’t just let you get your hands on those Sisters that easily

Clearly my Aonach Eagach experience had done me some good.

Oh, no, hang on a minute, my mistake

Seemed I was a bit premature on the scramble front........as the path fell off the end of the ridge 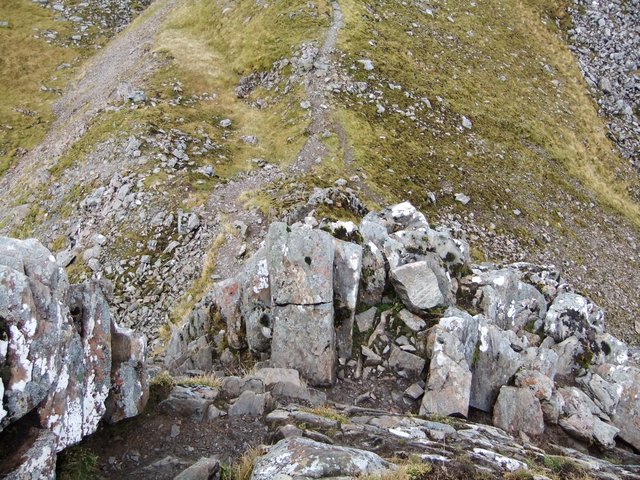 The scramble down off Spainteach 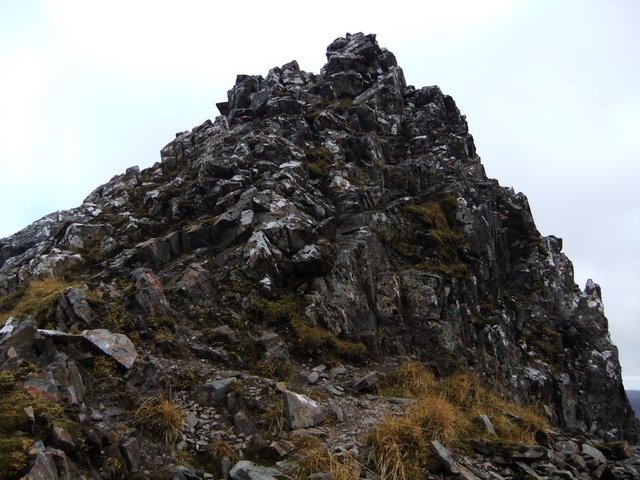 And the view from below

Took the path to the right of the cleft in the ridge below Sgurr na Ciste Duibhe. Probably one of the hardest “first” Munros I’ve had to get to on a walk before 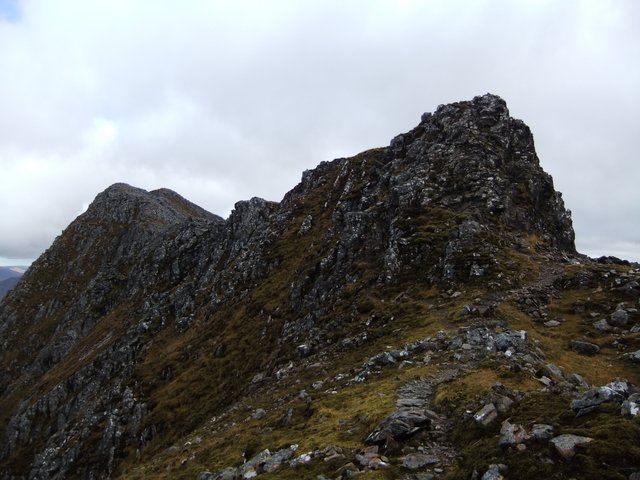 The reward? Just great views all round

Even with the cloud drifting in and out 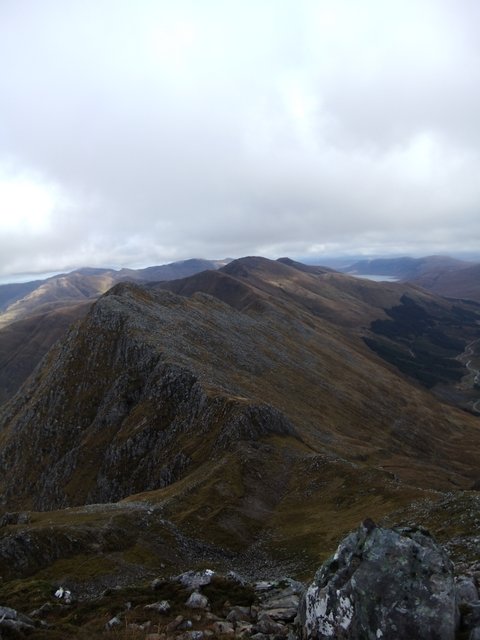 View back along the ridge travelled, with the Brothers behind 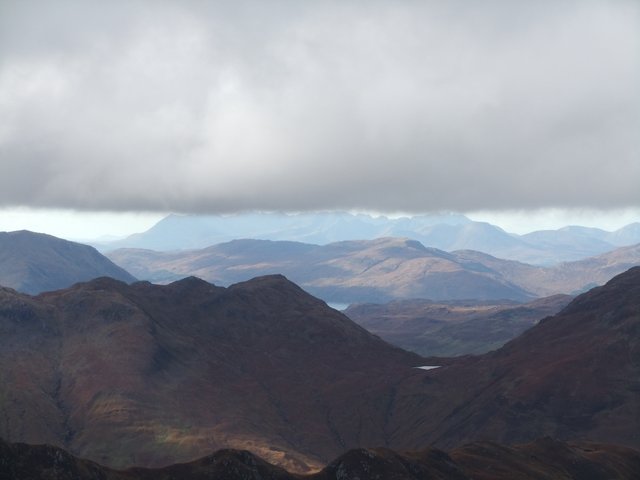 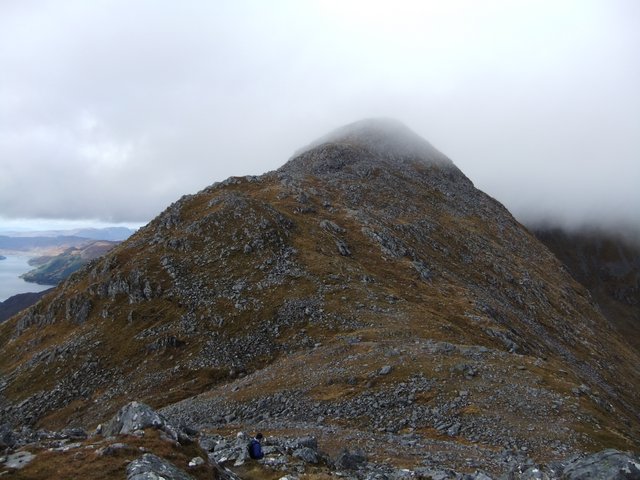 Despite the views Sgurr na Ciste Duibhe gave us a bit of a chilly reception. Brrrrrrr, it was cold

So, having enjoyed her delights for a short time it was off to pay a visit to sister #2, Sgurr na Carnach.

More steep descent, followed another steep climb up. Tough work, but ultimately rewarding. Stuart was a tad quicker than me up this one, as my left knee was starting to voice its dissatisfaction to me

Eventually though I crawled to the summit. Sister #2, Sgurr Fhuaran (#3) been predominantly in clag for most of the day so we were sitting looking back at the route we had already travelled, including the Brothers and all the other great hills on view. Clag came and went as we sat there taking it all in. 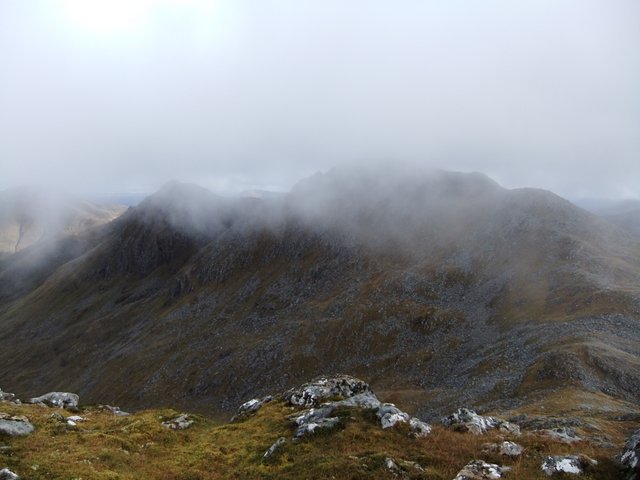 Misty view back from Carnach

Imagine the shock when I stood up to get myself ready for the off to turn round and saw all this behind me...... 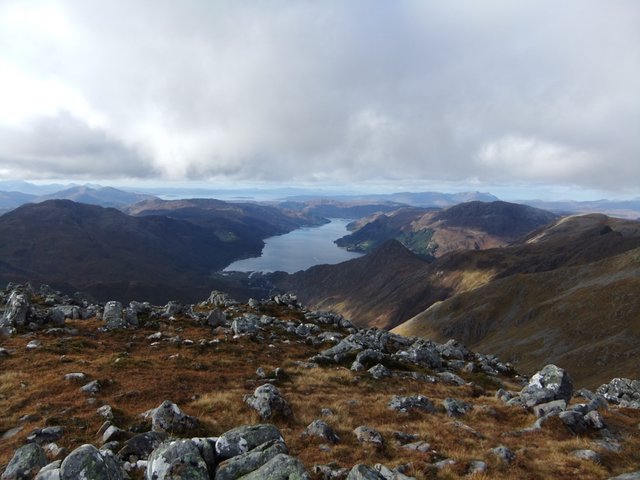 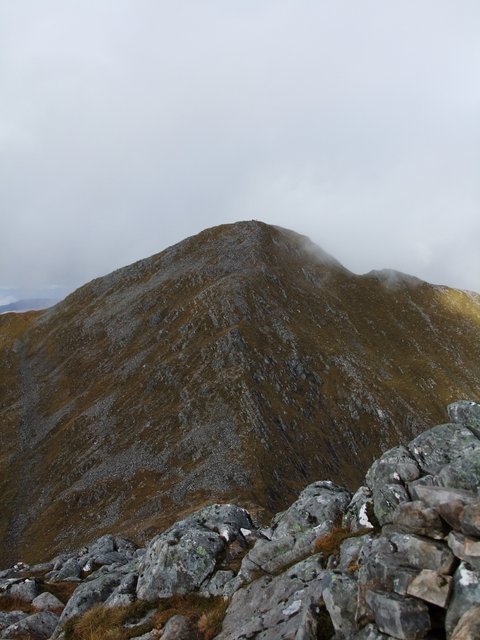 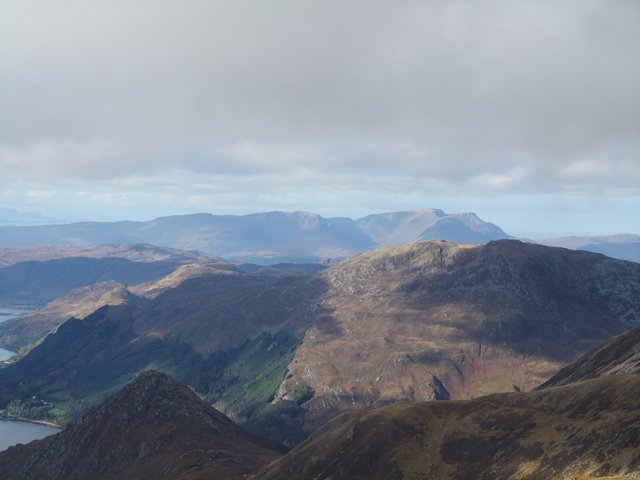 As much as my knee wasn’t happy with me, those views were something of a tonic. That was until we got walking again and my knee reminded me how it was feeling

Now it was time to tackle the big sister, Sgurr Fhuaran

Yet more steep down, followed by steep up

These Sisters certainly have something in common, that’s for sure The good thing is, they all deliver on the great views 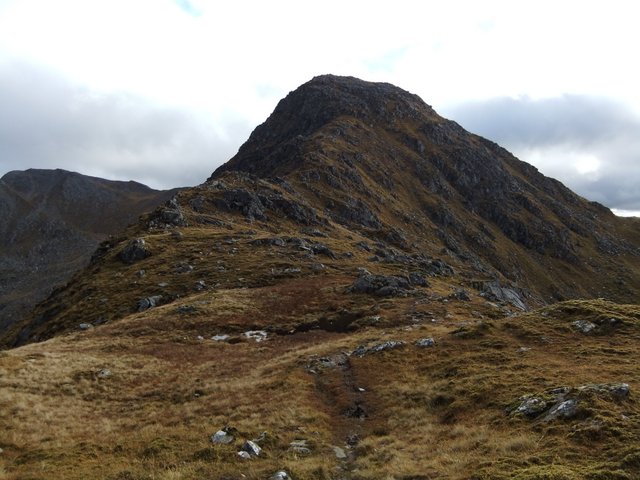 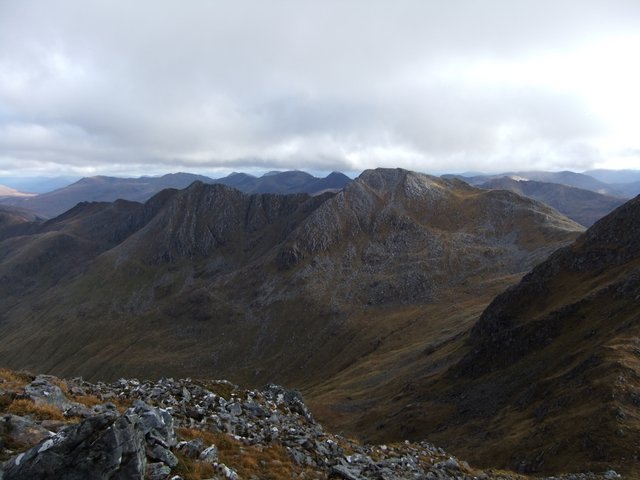 View back along the ridge from Fhuaran summit 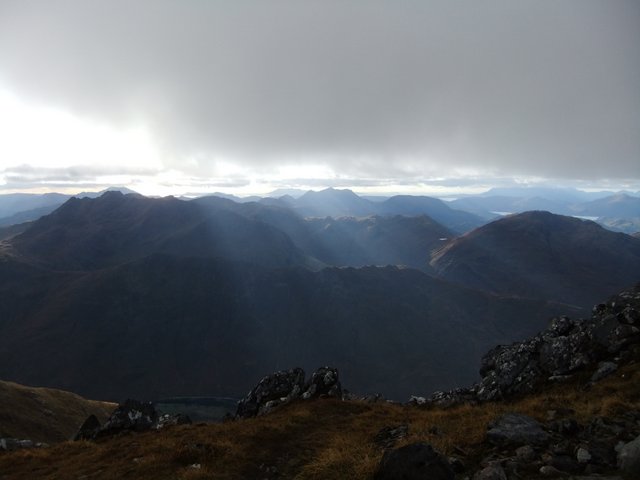 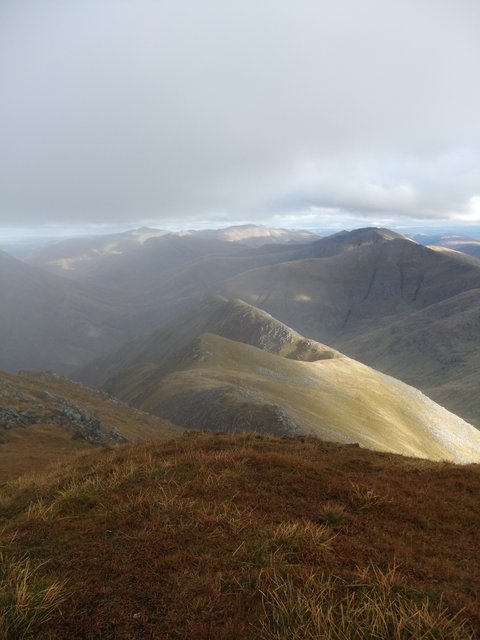 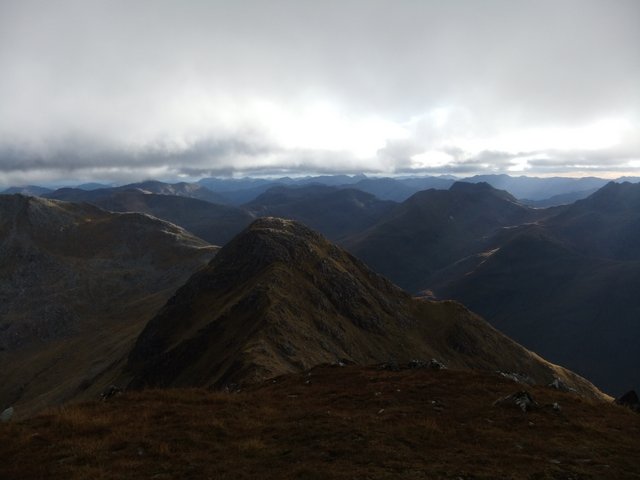 By now though Stuart and I were both feeling it 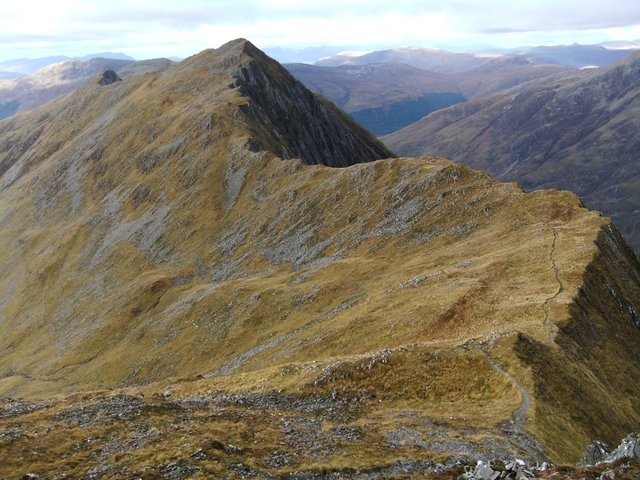 Despite both knees now screaming at me

the drop down off Fhuaran and the initial walk along the cliff edge and up onto Saighead was excellent. 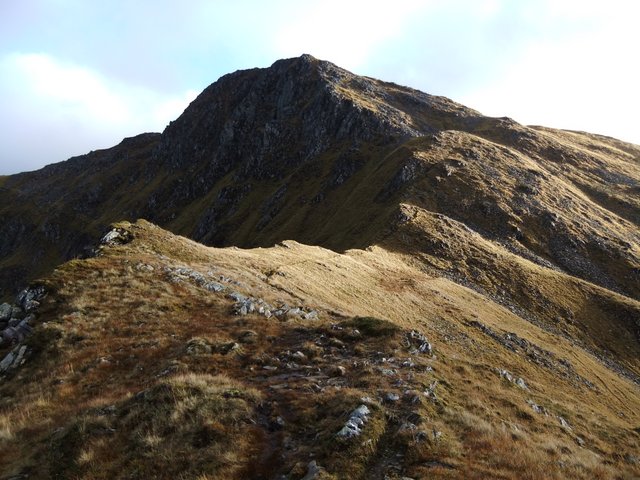 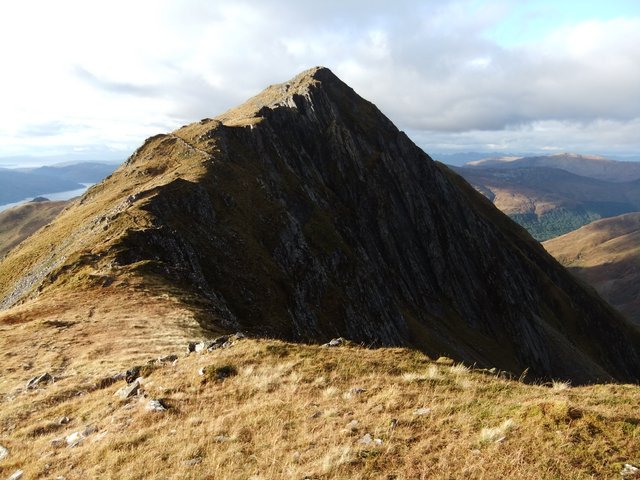 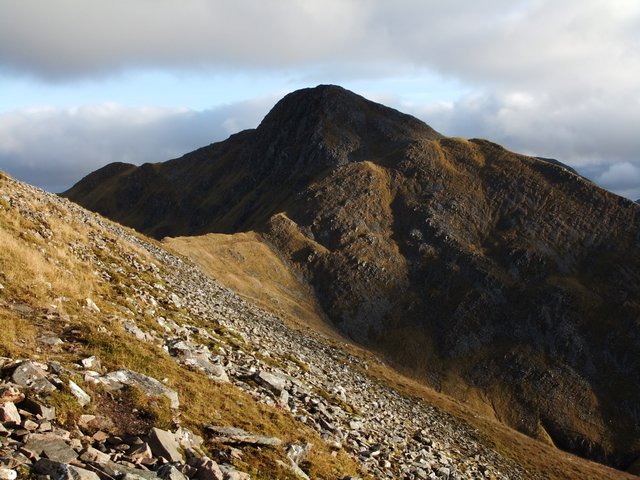 On closer inspection though we decided Saighead was a bit of a floozy, so decided to bypass her and Moraich and head down off the ridge toward Sgurr an t-Searraich.

Initially this route seemed ok, but there were a few unnecessary (in my opinion

) steep drops to navigate. Steep, boggy, gravelly, with a fair spattering of rocks

Then we came to the final steep drop (oh, if only that had been true

) before taking a right turn where we crossed the Allt a Chruinn and on to the path coming down from the bealach between Saighead and Moraich.

After an initial boggy section this path was a welcome pleasure

Well(ish) maintained and fairly easy going, so we could make good progress

Then, as the light was starting to fade we had the final steep drop of the day back down to the roadside. To be fair it wasn’t a bad section of path, but by now I’d had enough 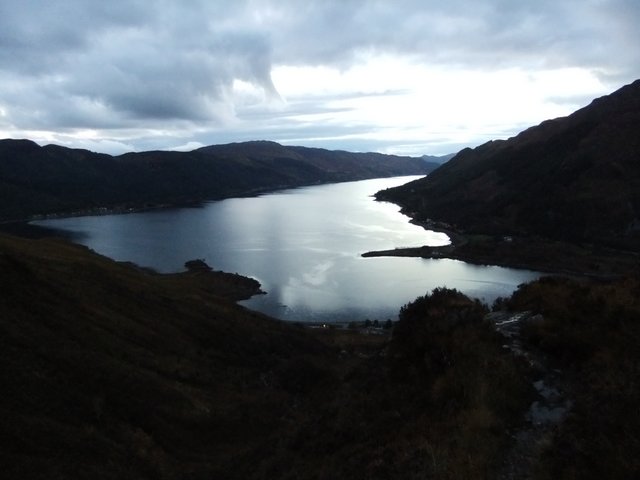 Loch Duich as the light starts to fade

It was some relief to finally be back on the road and heading back, as the light faded, to where the car was parked up at the Mountain Rescue buildings.

So, that was the Sisters. Well three of them at least. A tough, long, day. But a great day all the same

And the weather had improved as the day went on, blessing us with cloud free summits and improving views all the way

Definitely a walk I’d like to do again, perhaps taking in the other two Sisters too

Congratulations on the 200 Pete

Cracking hills those sisters, definitely amongst the best of our amazing mountains. Cracking route by the way avoiding requiring a drop off, top effort!

rockhopper wrote:Congratulations on the 200 Pete

Thanks rockhopper. Was glad the sun eventually won through on these hills and we got the views. Too good to be walking in clag in my opinion.

Cracking hills those sisters, definitely amongst the best of our amazing mountains. Cracking route by the way avoiding requiring a drop off, top effort!

Cheers bod. Given the curve in the ridge this approach certainly makes it a doable circuit, so long as you can survive the walk into An Lapan

Not sure I'd have wanted to be walking along the road back to the car.

Well done on getting to 200

Congratulations PeteR on reaching and breaching the 200 mark

And what hills to do it on !!!! Having done the Brothers and Sisters on the same day, I can honestly say there is nothing sisterly about them- they give all walkers a hard time regardless of your sex

Stonking report Peter,still got these blighters on my list,may be a 2 car trick & link brothers & sisters.

Age is only a number,you only feel as old as you want to feel,mind you I feel every year of my age just now.

Great set of hills to reach the 200 mark.

Congratulations Pete, brilliant effort and what a way to bring up the 200

Well done PeteR, great report and effort, congrats on the 200. Middle age - Pah, takes along time to forge and temper a precision machine.
Did the sisters myself fueled on rum, came down twice but luckily the Kintail Lodge broke my fall.