Having recovered from 5 consecutive days on the hills during the last week in September along with old school friends Clive, Matt & Gavin (the weather limiting us to 5 Munros) I was now just about ready for another outing and the weather very kindly obliged. My wife Gill & her sister Hazel dropped me off in the car park at the Dalmunzie Castle Hotel at 09.20 and it was under sunny skies that I set off to tackle Glas Tulaichean & Carn An Righ. Shortly a sign pointed the way to Glas Tulaichean through a field to the left taking me past Glenlochsie farm and onto the easy going track down Glen Lochsie. The way to Glas Tulaichean 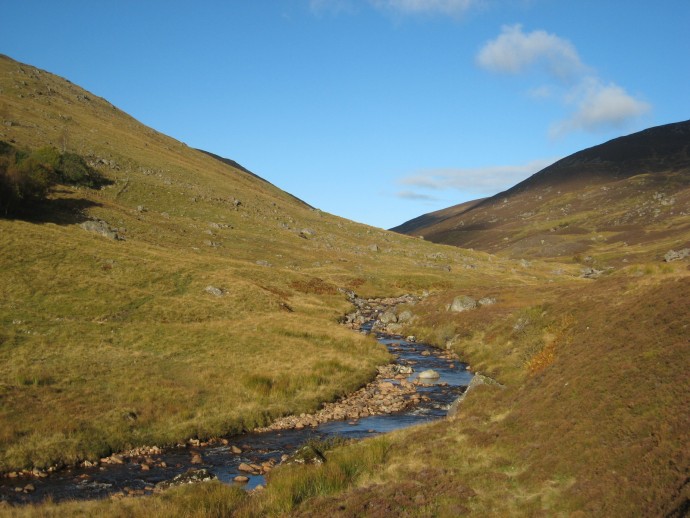 To avoid having to negotiate a couple of fords on the track I took the route of the old railway (departing the track to the right just before the first ford) which lead all the way to the ruins of Glenlochsie Lodge via a small footbridge before rejoining the track that now headed upwards via Breac-reidh ridge to the top of Glas Tulaichean. The route of the old railway Glen Lochsie from the route of the old railway Ruin of Glenlochsie Lodge, path up to Breac-reidh ridge behind Walking along the ridge the effect of the sun was nullified by the wind & cold necessitating the donning of my woolly hat, gloves and outer jacket. I turned off the main path towards the summit following the line of a couple of rusty fence posts reaching the trig point 2 hrs after setting off from the hotel. After a 5 minute stop for the obligatory photos it was time to get going again and with excellent visibility I had a good view of Carn An Righ and of the stalkers path running below Mam nan Carn that I needed to make for. However getting to this path firstly necessitated me following the path downwards along the North ridge of Glas Tulaichean, away from Carn An Righ, towards Pt.858m. After some time the NW facing slope looked as though it had eased sufficiently to make a direct line for the stalkers path so I headed across the grass and moss easily across the Allt a'Ghlinne Mhoir and through the odd bit of bog before intersecting with the stalkers path, which turned out to be quite rough, wet and somewhat boggy in places. Made it onto stalkers path below Mam nan Carn, Carn an Righ ahead

It lead directly to an obvious route up Carn An Righ that became more stoney as height was gained although I was just about able to pick a route through the large areas of scree making the summit cairn 3.5hrs after leaving the hotel car park. 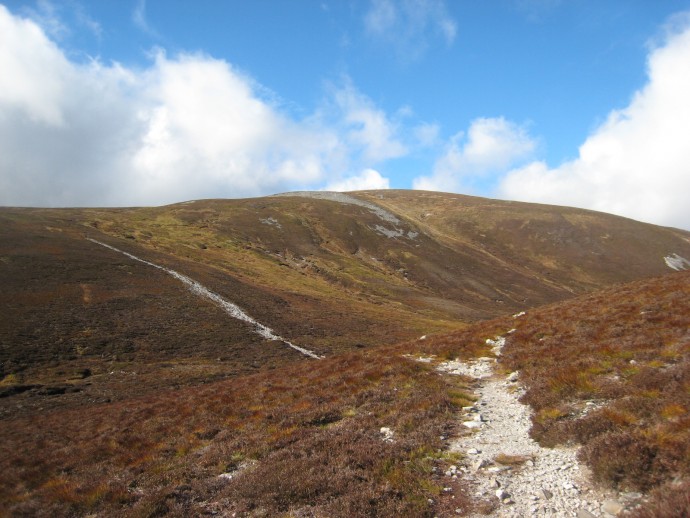 Path heading up Carn an Righ 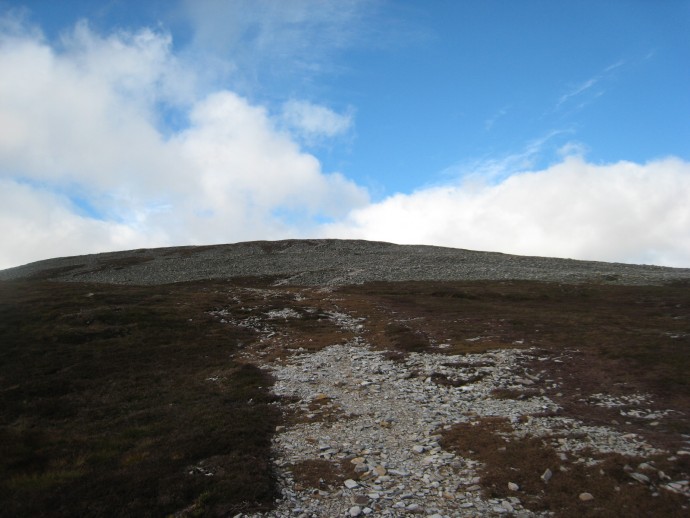 Scree further up Carn an Righ Just as I got out my cheese and pickle roll I was hit by a very brief snow/sleet flurry so decided to eat on the move. The route back to the hotel was a very long one, back along the stalkers path below Mam nan Carn and then down Gleann Taitneach. One possible route was to make for the col between Pt.858m and Glas Tulaichean then down down Glas Choire Bheag into Gleann Taitneach once the stalkers path petered out. However, the path never completely petered out and was visible almost right up to the Loch nan Eun although it did get more boggy and less distinct as I got nearer to it. I made for just right of the Loch where I joined a more distinct path descending from Pt.858m then easily crossed over the Allt Easgaidh as it started its journey from the Loch nan Eun into Gleann Taitneach. A narrow path descended on the left side of the river, steeply for quite some distance passing a number of waterfalls, the going being quite slow. Views down Gleann Taitneach, the way back 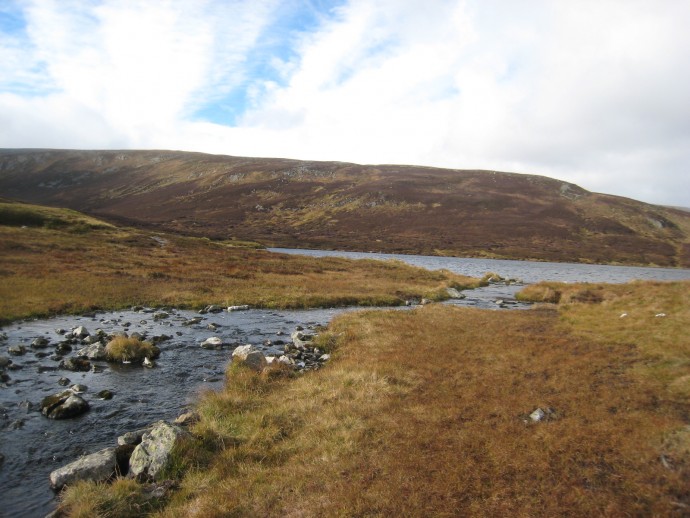 Over the Allt Easgaidh where it leaves Loch nan Eun Path just visible left down beside the Allt Easgaidh However after quite a time it did start to level out somewhat and eventually it met with an excellent easy going track, with a few fords along the way, that ran the entire length of the glen. One of a number of fords along Gleann Taitneach

Although the walk was long and my feet were now aching it was very pleasant in the late afternoon sun with seemingly not a sole about. I eventually reached a footbridge and re-crossed back over Allt Easgaidh, following the path through the Glenlochsie farm, emerging opposite the sign I had encountered 7hrs 15 mins previously at the start of the walk to be met by Gill, Hazel & Andrew in the hotel car park for the drive back to Blairgowrie. Footbridge back across Allt Easgaidh

Re: Glen Lochsie in October Sun

Nice report and pictures Howzat! I like Gleann Taitneach and Loch nan Eun very much. I was there some years ago mid May. There was a lot of water coming off the hills and the fords were unfordable if you wanted to keep the feet dry. So there was a lot of un-booting and re-booting going on

! I only caught a brief glimpse of Loch nan Eun then. It was veiled in mist when I arrived there, then the cloud shifted and revealed the loch for a few seconds. Magical! Thanks for bringing back happy memories!