drumochter 4 and the Sow of Atholl

drumochter 4 and the Sow of Atholl


drumtochter.gpx Open full screen  NB: Walkhighlands is not responsible for the accuracy of gpx files in users posts

On arriving at Balsporran I was still undecided where I was going to start this walk, it was a toss up between Balsporran or to walk back down the A9 and do the Corbett The Sow of Atholl. I liked the idea of getting the tough looking Corbett out the road making for an easier time later in the day….. decisions decisions.

I arrived about 7.45am later than I expected, and got talking to a guy from Cumbernauld who was doing the same round as myself accept he was not going to do the Corbett.

So that was it , the plan was in place. As we had decided to walk the round together, and he was not going to climb the Corbett the best approach was to start the walk at Balsporran and he would then head for the track from the 758 spot height after Sgainneach Mhor, leaving me at that point to complete the Corbett alone.

Visibility was pretty poor, and it was not until we got well up Gael Charn that we could see that we would be getting snow higher up. I was expecting flurries of snow during the day but was also hopeful of getting some sunny spells, which would be a massive change from my recent walks.

Gael Charn was reached in about 1hr 30 mins or there about, there were 2 cairns that we saw, so we made our way to each of them just to be sure. On leaving the summit the sun broke through for the first time and suddenly our spirits were up. 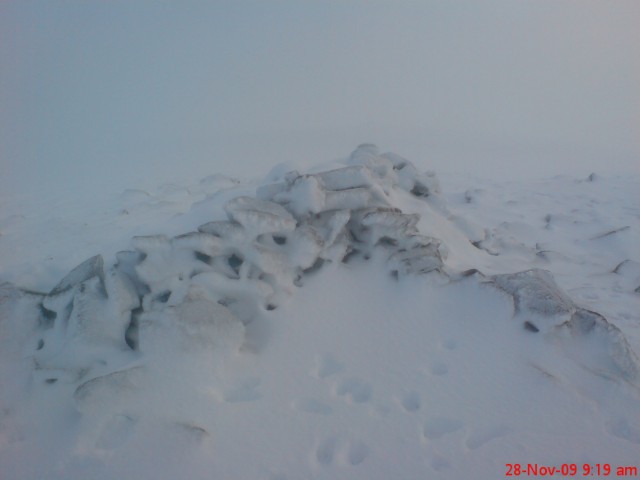 Snow was quite deep in parts and the going was fairly tough in areas where it had been drifting, but overall it was not too hard to keep making progress. Soon we were approaching Coire Fhair and we slowly curved our way east, to the summit of our 2nd summit of the day A Mherconaich. It had now got bitterly cold just before the summit and the wind was up again… so much for the sun… 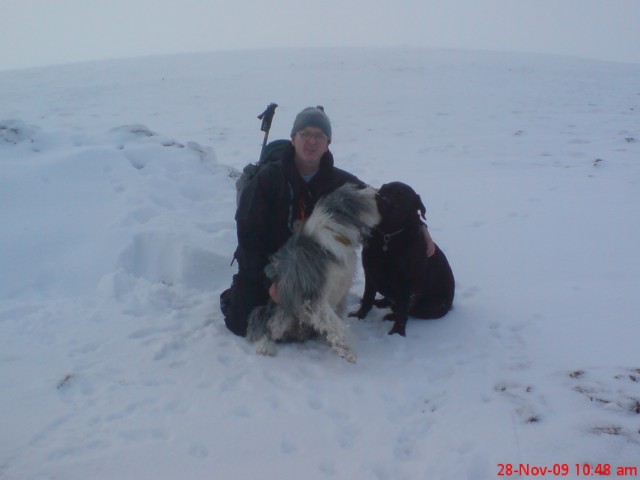 Now we were making our way for Beinn Udlamain, and the ridge heading towards the summit. Again we encountered some deep snow in this area, but progress was being made, even better the sun was back and as we closed in on the summit the views opened up and were quite superb for a short spell. 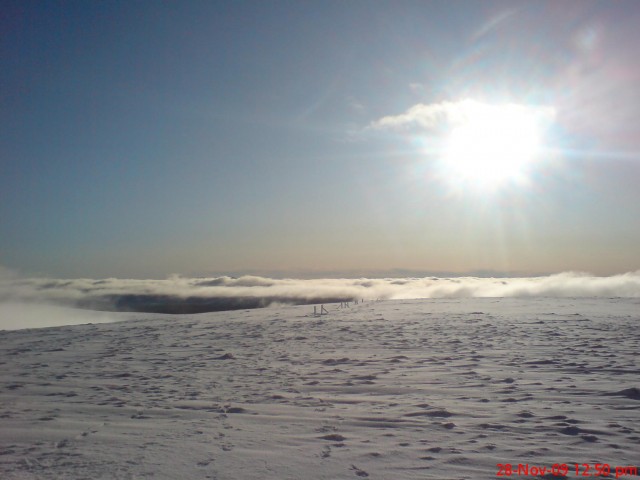 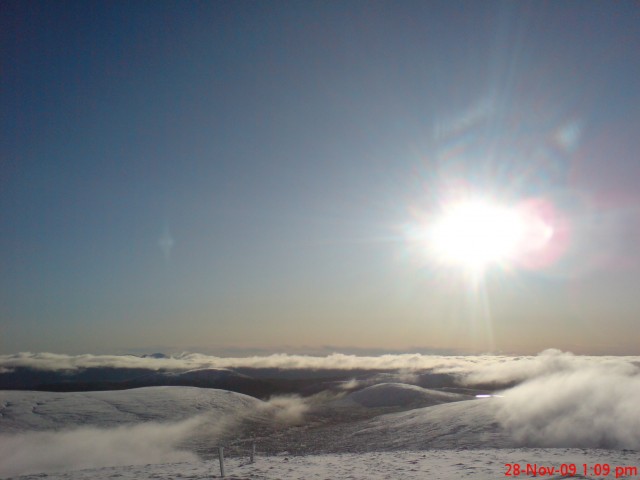 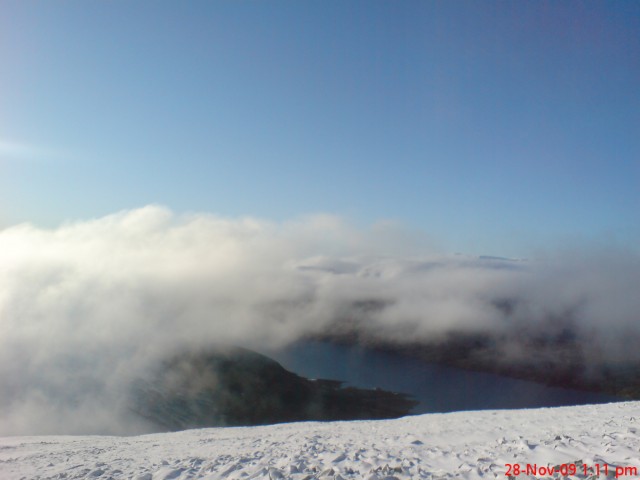 This was my first taste of a temperature inversion fantastic so it was, I only wish I had a proper camera and not just my phone. On we go and we are now heading for Sgairneach Mhor, by now it has been much milder than earlier and a layer needs to be removed at carn lc loumhaidh and by the time we reach the unmarked top south of the summit back on the layer goes.

Upto this point we have met several groups of people doing various combinations of our route, but I still seem to be the only one doing the Corbett 2day. From the trig point at Sgairneach Mhor we head east to the 758 spot height, it is here I say bye to my walking buddy, he heads north down towards the 4x4 track and I make my way down and around the crags getting my self in position for the ascent of my 1st Corbett The Sow of Atholl. I tell you this, after a long day the Corbett was really hard going and with daylight fast running out I twice thought of just jacking it in, but in the end I went for it and the Corbett was bagged at 4.25pm as dark was fast approaching. Headed down NNW I think, it was very steep but atleast I could still see the 4x4 track just that I needed to reach. About 1/2km from the track and out comes the head torch its now pretty dark but thankfully im down off the worst. 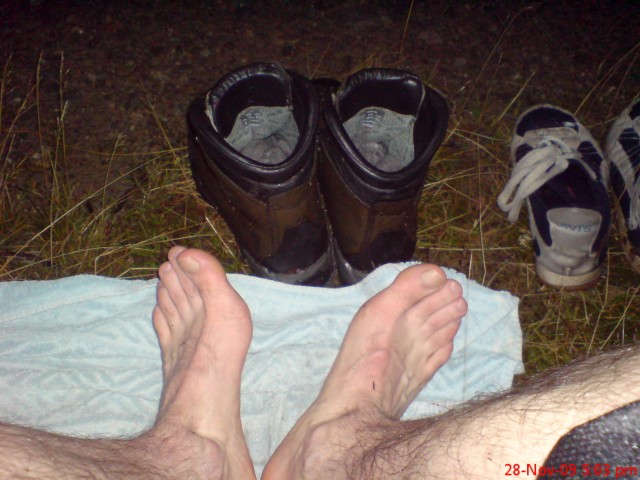 This time im prepared, into the bag I have a search for my old trainers as the Allt Coire Dhomhain is 15 feet wide and is flowing fairly rapid. That’s it, no more obstacles only the small matter of the railway line and getting the dog over the 2 high fences either side ready for the long walk back.

If I had to do this walk again I would defiantly do the Corbett first, but overall I was more than happy doing it the way we did as the views on top of Benin Udlamain were superb.

Nicely done Dave, we did this a few weeks back and there was snow on 3 of the 4. Didn't get out of the cloud for most of the day and decided not to do the Sow. I found it to be some struggle walking back down the A9 to the car park as my feet were killing me at that point. This is a good circuit though, a bit slippery when crossing the stream though as my walking partner found out

Can I just say that Wilson looks a little p*ssed off with this hill-walking malarkey. Was he missing his pal from earlier in the day.

To be honest, i think he was glad to see the back of Charlie the lab, at times im sure charlie had anger issues

i must admit, buy the time i took the pic of him on top of The Sow of Atholl the both of us were more than just a little p-s-ed off.

, was a great day out though certainly one of my best.

I was up there not so long ago and while cold, it's amazing the difference a few weeks make!

I'll be honest, I think you are nuts for going for the Corbett when darkness was approaching but well done, none the less.

I knew i was pushing it, but the weather was pretty good considering. That pic of the dog on top of the Sow of Atholl actually looks a lot darker than it was, and as i mentioned i was well down off the summit when i had to reach for the torch, probably got to with'n about 300/500 metres from the 4x4 track.

So it wasn't pitch black on the summit then?

sloosh wrote:So it wasn't pitch black on the summit then?

. Maybe you are right though, i must try and stop cutting so tight in future.