It’s been our annual 2 week holiday to Scotland and, this year, was spent on the wild west coast of Argyll

As some of you know already, a few months ago I debated long and hard and invested in a wheelchair. At first this seemed to be “giving in to the arthritis” but, as a friend said, “more like 2 fingers at it” as I can get to places I couldn’t reach before(sounds like something from an advert

) as long as someone is willing to push me

I told Jeff he would be in charge and could push me around; he made some comment like “after more than 40 years of marriage, at last and about time”

Don’t know what he means? We were reliably informed, by a National Nature Reserve warden, we could probably get the wheelchair along the path at Taynish Reserve in order to reach the rapids at the end of the peninsula and, possibly see otters. Taynish is maintained by Scottish Natural Heritage. To reach it you drive through Tayvallich and onto a very rutted single track with barely a place to pass. There’s parking for several cars and even includes a disabled bay

Free leaflets are available in the car park, next to the board which displays several walks The Oak Woodland covers much of the Reserve, with some Holly and Birch, and the moist clean air means that lichens and mosses cover the trees. Analysis of ancient pollen, trapped and preserved in nearby peatlands, shows that oak woodland has grown there for around 7,000 years. Ancestors of these trees survived the last Ice Age in southern Britain, then moved northwards as the ice retreated. Taynish is one of the largest remnants of ancient woodland in Knapdale, and sustaining the woodland is a key priority on the Reserve. We set off on the Woodland Trail, along the access track to Taynish House (privately owned) and passing through ancient woodland. This is the “Northern Rainforest”; so called because of the damp conditions. At first it was extremely rough and pitted with large muddy pools. The wheelchair swerved from side to side to try and avoid these whilst I bounced up and down over the many stones. Suddenly, it veered sharply to the left and, what the **** was going on

There I was, hovering above the deep ditch at the side of the track and in amongst the stinging nettles

I was told the chair had a tendency to steer to the left and, as this was the side of Jeff’s frozen shoulder, it was making things difficult. A few yards further on this happened again and I was then leaning over the right hand side of the wheelchair to prevent it toppling into the ditch

I was getting a bit suspicious now, was this him trying to get rid of me???

The third time clinched it........the chair tipped forward, the feet rests were firmly implanted into the mud of a deep hole and I was trying not to do a “Tom Daley” and dive into it

Right oh! Any sign of mud, holes, stones, uneven ground and I was out of the chair and walking(with my sticks). So, that was, in fact, a lot of the time! I also had to walk uphill as it was too much of a struggle to push me

I was informed that, if I could lose some weight and be like the camera, which was now sitting in pride of place, then things would be so much easier! Ok, so I’ve put on weight in the past few years since I haven’t been able to walk the hills or cycle but, to weigh the same as the camera is just being silly....isn’t it? Eventually, after about 2km, we turned onto the Coastal Trail which was by far the best surfaced path. Sheer luxury! This took us through the coastal strip, down to a bench overlooking the rapids between the peninsula and Ulva islands. The coastline of the Taynish peninsula forms the boundary for most of the Reserve. The maritime grasslands and saltmarshes here are important habitats for species like the otter, which comes ashore to feed and shelter. Unassuming plants like saltmarsh rush and saltmarsh flat-sedge grow in coastal saltmarshes. More colourful displays appear on the old raised beach at the south-west end of the peninsula, where herb-rich fen meadows have developed. These are the home for plants like marsh bedstraw, devil's bit scabious, and meadow thistle in one of only two Scottish mainland localities. This rich habitat mosaic covers just 15 hectares, but adds greatly to the importance of the Reserve. 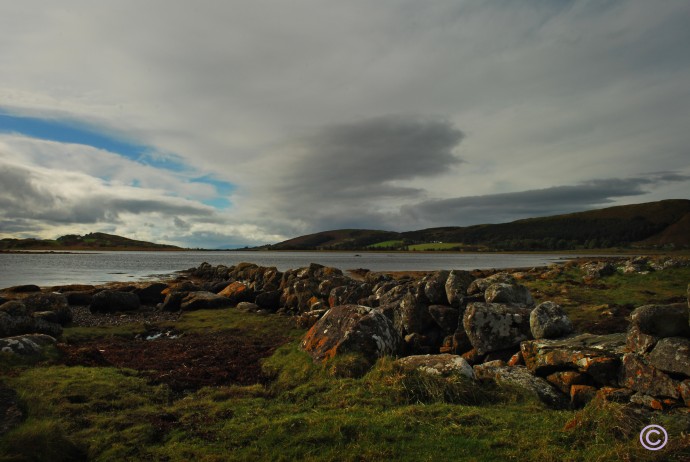 We had our lunch sat on the bench and then set off again; back along the Coastal Trail to rejoin the Woodland one. 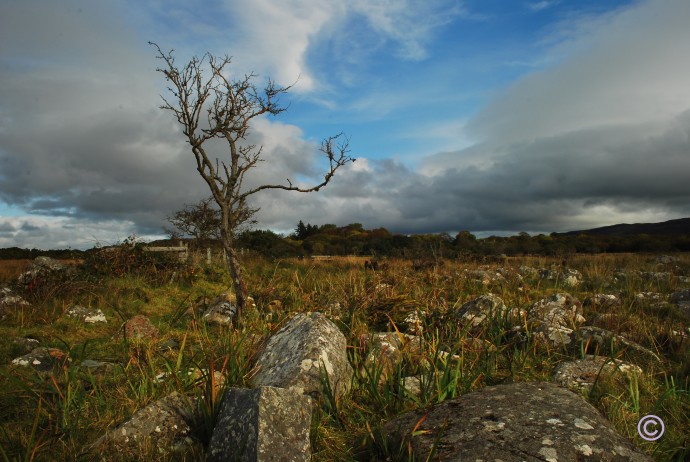 We’d gone about 100m on the Woodland Trail when our path turned into a field and became a narrow one. Therefore, after looking at the map we decided to just turn round and retrace our steps. Oh, and yes, we were lucky enough to see an otter swimming nearby! 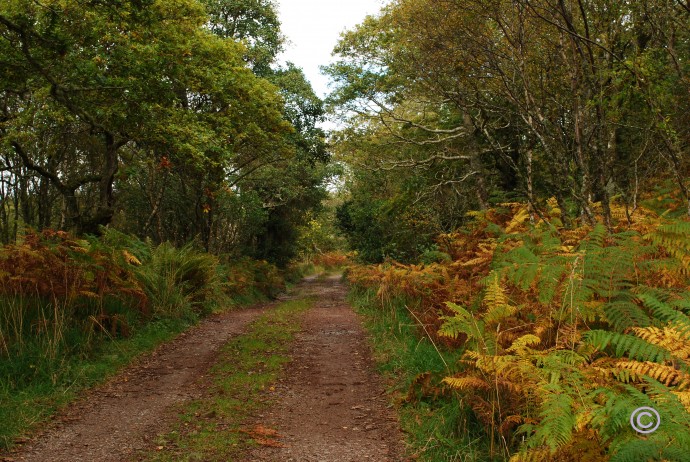 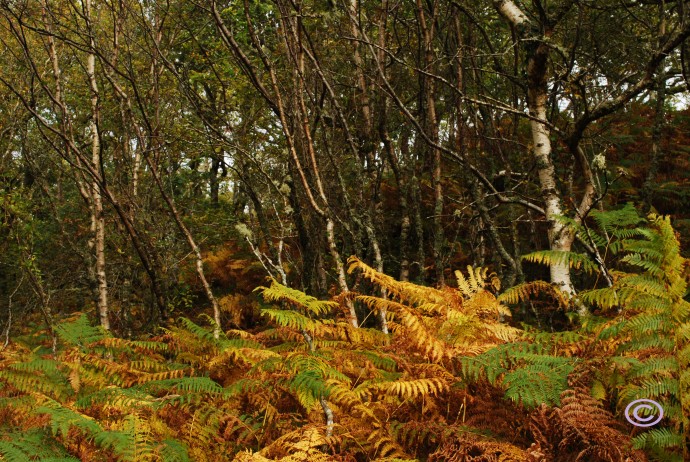 This was an enjoyable walk, despite the hair-raising moments, with plenty of information on the leaflet regarding the interpretation boards that are placed around the trails. We saw families setting off walking as well as on bikes and I’d certainly recommend these trails as being particularly “family friendly”

We don't get a report for ages then two come along at once. Again lovely photos & well done to both on the effort. 9.5 for the Tom Daley.

I'm half expecting you to "pimp your wheels"

Must be like having a new lease of life getting to places you thought wouldn't happen.

Love the photo of the lone tree, dark and menacing.

Hey there must be a Munro out there that your fella could push you up????

lovely pictures, it seems like one person's idea of wheelchair friendly is not quite another's. You are one determined lady, maybe what you need is a farmer's quad bike!

jonny616 wrote:We don't get a report for ages then two come along at once. Again lovely photos & well done to both on the effort. 9.5 for the Tom Daley.

Thank you for your comments, I'll try for 10 next time

dooterbang wrote:I'm half expecting you to "pimp your wheels"

dooterbang wrote:Love the photo of the lone tree, dark and menacing.

dooterbang wrote:Hey there must be a Munro out there that your fella could push you up????

Let me know if you come across one

mrssanta wrote:lovely pictures, it seems like one person's idea of wheelchair friendly is not quite another's. You are one determined lady, maybe what you need is a farmer's quad bike!

Thanks mrssanta and great idea about the quad bike

Great effort again Susie (by both of you) I think you should have been looking at an 'offroad' wheelchair rather than a 'sport' model, those small front wheels are just not made for rough ground and you seem to spend a lot of time offroad

I can see that you are in training for the Commonwealth Games as your trainer and mentor has got you into a position where you are looking at Triathlon. If you can make it over the route you have taken in this report you will be a shoe-in, especially with the motivation from hubbie!

ChrisW wrote:As a married man I too am in control when my Mrs says I am

good to hear you know your place!

I also love the pic of the lone tree, worthy of a prize somewhere i think

ChrisW wrote:
As a married man I too am in control when my Mrs says I am

Thanks Chris and glad you know your place as well

Jockstar wrote:I can see that you are in training for the Commonwealth Games


Was it that obvious?

scoob999 wrote:Great report again Susie
I also love the pic of the lone tree, worthy of a prize somewhere i think

Thank you, they were quite good in places and I'm sure lots more will be appearing by now

Lovely pics Susie particularly the lone tree amongst the boulders.