Day 1 – I had decided to join old school friends, Clive (keen to get his number of remaining Munro’s below the 100 mark), Matt and Gavin, on a five day Munro bagging break, based at the excellent Bridge of Lochay Hotel in Killin. Clive & Matt had arrived in Edinburgh to chez Howzat from London by train the previous afternoon and the plan was to set off on the Saturday morning in a hire car to meet up around lunchtime with Gavin who was driving up from his home in Oxford to bag Ben Chonzie. However the weather forecast was excellent for the Saturday but progressively getting worse through the rest of the holiday and as a result we decided to set off earlier from Edinburgh to tackle the more challenging Ben Lui along with Beinn a’ Chleibh, Gavin deciding instead to knock off Ben Lomond. We arrived at the car park on the A85 in Glen Lochy, a little over 2 hours after departing Edinburgh and set off along the path next to the river Lochy before quickly encountering the first of many obstacles of the day; the river Lochy itself and the rail track that runs alongside its far side. Firstly we all changed into suitable footwear (Teva’s for me) before wading through the freezing cold river near the outflow of the Eas Daimh. Immediately on the far bank we somewhat awkwardly had to make our way under the rail track by wading under a low bridge, Clive temporarily losing a walking pole into the Lochy in the process. All this seemed to take ages, what with drying feet and putting socks & boots back on, and we’d barely managed to go a few hundred yards! Clive & Matt crossing the river Lochy, all smiles so far Clive goes searching for his walking pole down the river Lochy Under the railway track

The ‘path’ that made its way upwards through the forest alongside the burn was almost entirely one long horrendous bog, the gloop in many places knee deep, with almost no way of navigating around it due to the denseness of the surrounding foliage, although in places there was the odd bit of 4x2 to assist! I managed to spot the extremely small cairn marking the turn off of the main path to cross the Eas Daimh. In attempting to make the crossing I’d decided that I didn’t need to use the blue line placed above the crossing stones for assistance and as a result ended up sliding down a slab of rock head first towards the river! So far for me this was proving to be a far from enjoyable experience, feeling more like an assault course

, so it was with some relief that after about an hour’s slog we made it out of the forestry into Fionn Choire. The path through the forest that quickly turns into a bogfest Turn off the path Out of the forest at last!

When a route description says that the way up is ‘unrelenting’ you can be sure that it will be, and so it was as we headed straight up the pathless grassy slopes towards the north ridge of Ben Lui. The pathless and unrelenting slog ahead 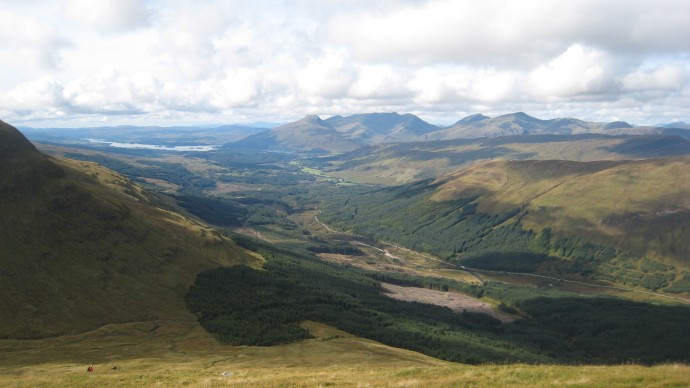 Views back to the starting point as height gained Me looking hot but not too knackered....yet!

Eventually I made it onto the ridge and was now presented with a couple of scrambles (well scrambles for me) to get onto the summit ridge. It was with some relief when I finally made the SE summit cairn that presented superb views in all directions. Clive & Matt on the north ridge Small scamble ahead to get onto the summit ridge The path to the somewhat disappointing looking Beinn a’Chleibh was clearly visible and after a steep descent down to the bealach between the two mountains we were presented with a thankfully short ascent back up onto the summit of Beinn a’ Chleibh. Time for a spot of lunch, Beinn a’ Chleibh behind and the path to it clearly visible Me happy I've made it to the summit of Beinn a’ Chleibh, just the return through the bog to go!

The return down was still extremely boggy, wet (my feet now squelching in my boots), slippery causing a couple of very close encounters with the ground and long! It was a relief for my sore feet having to wade back across the Lochy, before finally making it back to the car approximately 6 hours after departing. We then drove to meet up with Gavin at the Bridge of Lochay hotel to check in before enjoying a hot shower, the first of many pints of the excellent Lomond Gold and a lovely meal in the hotel restaurant, and this was only day 1!

Always use the rope

Good detailed report there and some nice photos

(although I missed the worst of the bog that way). I was on those two the day before you so it's good to see you got the same weather that I did