We started our walk up from Kirkland with the temperature hovering just above freezing,we managed to resist the temptation to throw on extra layers as we got our kit together and put our boots on.As we drove up the M6 we could see that all the main summit tops in the North Pennines and lake district had snow on there upper reaches,which we thought would be nice addition to the days walk in which we would be taking in Cross Fell,Little Dun Fell,Great Dun Fell and Knock Fell. Car park at kirkland and start of footpath

We parked up at Kirkland Hall were theres a comfortable amount of parking available and headed up the track that continued from were the road dead ended, as we walked out of the small wood on to the open of the lower slopes the wind and more noticeably wind chill hit us, a constant 20mph or so, hands went darting into pockets searching for hats and gloves as the wind chill took us into the minuses Out onto the lower slopes of Cross Fell

Following the marked footpath for a short while we then deviated off onto a well used track not marked on the map and took a more direct approach up onto Wildboar nab towards Grey scar and made good and rapid height increase into the start of the main snow line and the start of the cloud base around 550 metres, as we were to find to our cost staying with the marked footpath may have been the better option as we struggled to make headway in what essentially was a bog with a thin crust of semi frozen snow over it which our feet broke straight through into the bog and with the wind bearing straight down at us it made for a slow and demanding struggle to our first top Cross Fell,once on top we had a well deserved cup of coffee a bite to eat and added another layer. Into the snow and bog After checking our map and heading we descended down towards Tees Head and the saddle between Cross and Little Dun Fells occasionally getting caught out by a solid icy patch here and there and trying with little success to stay in touch with the cairn markers en route due to the cloud out,eventually we picked up the stile and the footpath beyond which was well buried in a coat of ice, but just visible enough to keep us on it although tentatively with the coating of ice on it,this still made for much better traction and a lot less exertion as we started to ascend again. 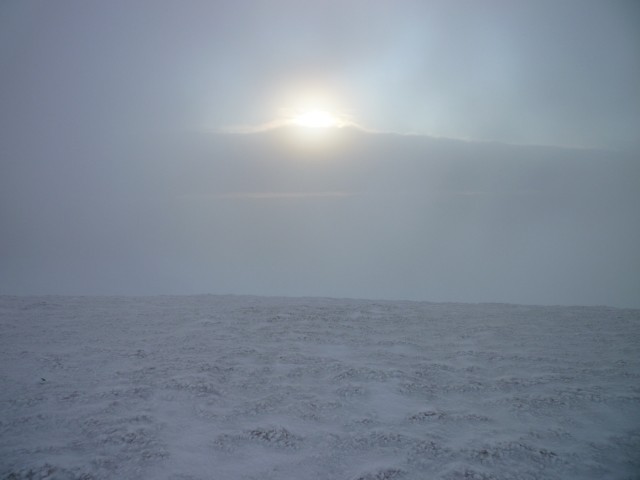 The climb upto the summit from here was straightfoward enough and the cloud was breaking now and again to allow us a brief glimpse across into the lakes to our west and the other Pennine Fells to our east,we decided after a brief pause at the top that we would have to leave out Knock Fell as it was too late in the day and we would be descending in the dark as it was, so we carried onto towards Great Dun Fell and thankfully not as far to reascend after the saddle to the top of our next summit,having seen photos prior to the walk we wondered when the golf ball would reveal itself to us out of the clag,but not until we were about 200metres away did it edge into view looking like something out of Ice Station Zebra with icicles and frozen snow stuck fast to great parts of the building exterior, after skirting what seemed to be an electrified fence, we walked around its buildings and masts, a surreal experience at nearly 3000ft and after a quick nose bag we retraced our steps and made our way towards our escape route at Tees Head. On our return leg the cloud lifted more substantially and in time to watch the Sunset over the Lake District we took a pause on Little Dun Fell for some sunset photos before making our way in the gathering darkness towards Wildboar Scar and the slog down,we had dug out our headtorches earlier in the walk not expecting the full moon which appeared and lit up the mountainside to aid our descent back to the car finishing off a great day out in the hills. Sunset over the lakes from Little Dun Fell Cross Fell.gpx Open full screen  NB: Walkhighlands is not responsible for the accuracy of gpx files in users posts

Hello,
I never been down in this area....had to look up the map. Looks like a good leg stretcher.....we have too much up here!
Maybe get down there one day.
However it must be fine to have a wee bothy at 700m. on a cold day within which to have your 'piece' and a hot drink...is the hut in good nick?

Good report on what looked like a very cold day - I'v scoured my mapping sofwear but cant find Cross Fell - where is it?

gaffr wrote:Hello,
I never been down in this area....had to look up the map. Looks like a good leg stretcher.....we have too much up here!
Maybe get down there one day.
However it must be fine to have a wee bothy at 700m. on a cold day within which to have your 'piece' and a hot drink...is the hut in good nick?

Hi submitted this before i got round to finishing it ,as you will see we took a small diversion so missed the bothy but from photos i ve seen it looks as good as any up north.we didnt do the full round either unfortunately we hadnt anticipated the ground would be as difficult going as it turned out,but a good day out nonetheless and three very nice summits my first walk in the North Pennines.

37lumleyst wrote:Good report on what looked like a very cold day - I'v scoured my mapping sofwear but cant find Cross Fell - where is it?

Hi ,these fell tops are in the North Pennines,Cumbria basically at the Penrith end of the A66.there is a map you can see on here if you use the custom search in the top right corner of the page.Just put Cross Fell in its the first result if memory serves.

Hi johnnyaztec and welcome to the site! Thanks for your first report - brings back memories of doing the Pennine Way years ago

I selected the Hewitts (2000 foot hills) you climbed on the way for you. That means your report appears on our pages for the hills (e.g. http://www.walkhighlands.co.uk/hewitts/cross-fell) so that other people interested in those hills can easily find your report.

Ill actually try and finish the report by the end of the year, i submitted it by accident!i was just drafting it and hit submit instead of preview , anyway its a work in progress for the moment.

This is a great site and resource for walkers and came in really handy on my hols in october when i was up in Sutherland in helping to research my walks.

Ah - got it thanks. There is a quite a lot of military action on these fells as 'Worcop' is only down the road on the A66, which is used extensively for training exercises.

Didnt see any range danger areas when i was up there,and there arent any marked on the mapsheet we had to my knowledge but your right Warcop is the near vicinity.

Thanks for the compliment very kind of you to say so,im goin to hopefully have the report finished by the weekend if not before.

The danger area is away to the South east of Cross fell - its across Murton Fell, Little Fell, Worcop Fell and Mickle Fell. Its a vast area but is clearly marked with fences, flags and notices on every walk in - unlike some military ranges and exercises areas, this one is in use almost every day so its well 'manned' and posted.

37lumleyst wrote:The danger area is away to the South east of Cross fell - its across Murton Fell, Little Fell, Worcop Fell and Mickle Fell. Its a vast area but is clearly marked with fences, flags and notices on every walk in - unlike some military ranges and exercises areas, this one is in use almost every day so its well 'manned' and posted.

I ll bear that in mind for our next jaunt and plan accordingly, hopefully up there in probably January again, after our new year in the lakes.

Looks like you had a good day for doing Cross Fell. The Bothy (Greg's Hut) is on the North slopes of the fell. Here are a couple of pictures of it. The snow one taken years ago!!! The other one is rare; a warm sunny day!! Yeah thanks, as you noticed we took a slightly different route up, it looks like a good size and in good repair would have been nice to have a stop in there for a warm.

johnnyaztec wrote:Yeah thanks, as you noticed we took a slightly different route up, it looks like a good size and in good repair would have been nice to have a stop in there for a warm.

The snow one we did from the same place as you and cicuited to Greg's Hut then straight up in a whiteout then off to Tees Head where the stone was covered in snow then back down over wildboar scar.
The second one was from Garrigill.