I had planned to this hill last weekend but a late start had me changing to a plan B of Meall a’ Bhuridh and Creise instead. I had no problem getting from under the duvet this time so was away from Glasgow at 07:00 and happily munching a bacon roll in the Green Welly about 08:15

There was already a car parked up at the space by the bridge at the start of the walk by Invercharnan. The new forestry road means you don’t need to go by the house anymore. The road is part of a lot of track put in for the extraction of timber from the area.
The walk through the forest was a good way to get the muscles warmed up and the sight of a few of the ever present deer down this glen made for a pleasant start. There was a large area of cleared forest passed and what looked like a significant bridge put across the river to aid the access to the timber.

The edge of the forest was reached in just under the hour and good views to Beinn Fhionnlaidh and Sgurr na h-Ulaidh were stunning. Both were capped by cloud at this point.
A boggy trek up the valley following an obvious track most of the way had me at the bealach between Sgurr na h-Ulaidh and Meall a’ Bhuiridh in another hour. There were a number of deer in small groups along with a fair number of frogs seen coming up here. A brief stop to admire the scenery and a snack before heading up the ridge seemed appropriate.
The ridge is straightforward enough with a couple of crags to negotiate by passing to the left. About halfway up this I was in the clag

, a jacket was pulled on as it got a bit chilly in the clouds and the bit of breeze that had picked up.
The top was reached in less than 3 hours from starting. There were no views to be had and I considered heading back down to have lunch in the sun but decided to get a brew on and hang about up on top hoping for views to open up.
Happily they did and I was also treated to the best Brocken Spectre I have seen, the peak of the treasure indeed

.
Views opened up to the south and west but the north stubbornly refused to let me see any of the Glencoe tops.

There is a small plaque attached to a rock in the summit cairn placed by a compleater earlier in the year. Although the poem was OK and sentiment I understand, I cannot say I agree with leaving a mark on the mountain.

Having spent a happy time on the top I headed back down the ridge and set back off down the valley to the forestry but stayed a lot higher until dropping down to the forestry access. This, although wet in places, was not nearly as boggy as the way up. Looking back at the now clear summit a group of around 12 people were seen traversing across from Stob an Fhurain. They would have spectacular views but I was happy to have got them to myself.
I was back at the car 5 hours after starting out.
Some photos below of the day. Bheinn Fhionnlaidh from the forestry edge The ridge up to the summit Looking back to BF Down to Loch Etive 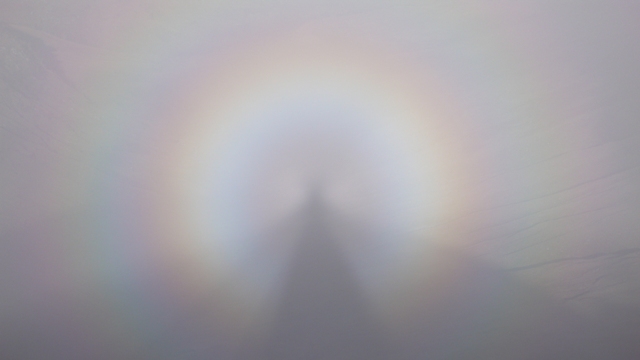 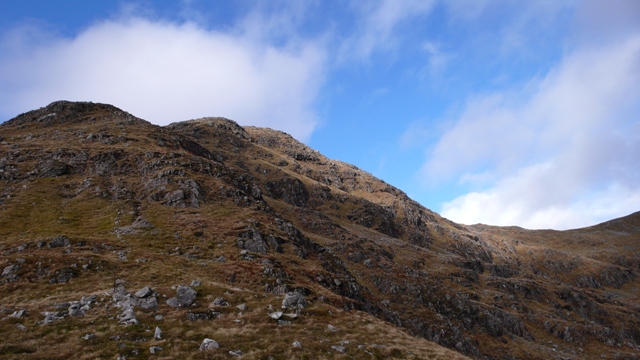