The onset of winter has finally descended from its northern climbs and as it makes its way down through the UK leaving smatterings of snow and ice across Scotland and Newcastle, the Lakes seem to have avoided the worst of the weather (for today at least) but it has turned bitterly cold.
So, time to try out the newly bought winter padded trousers and don the fur lined "trappers" hat and head over the Kirkstone Pass to park in the small layby / bus stop at the foot of the pass.

Photos were taken immediately as I contemplated the steep incline back up todays first target of Middle Dodd. 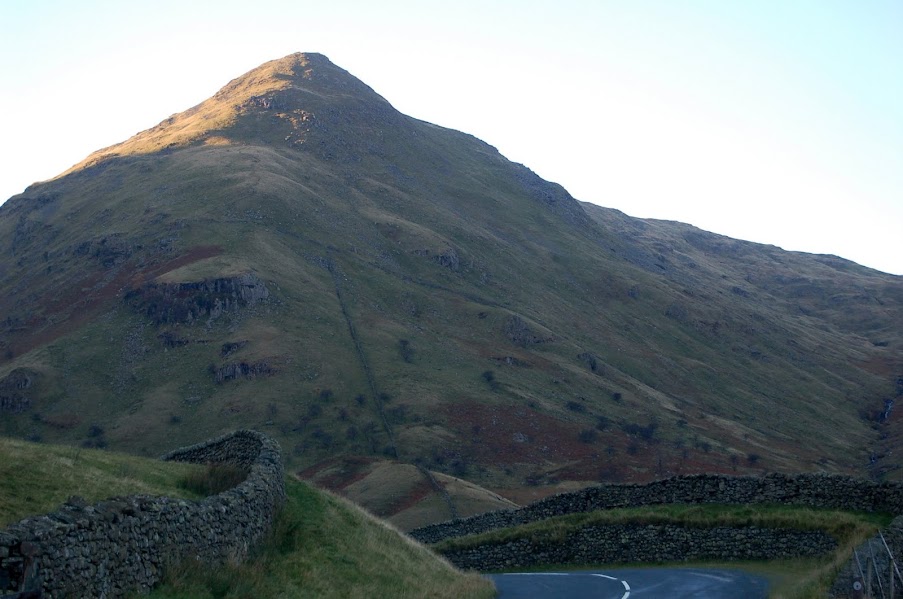 Middle Dodd from Kirkstone Foot (taken from car @09:00 as we set off) 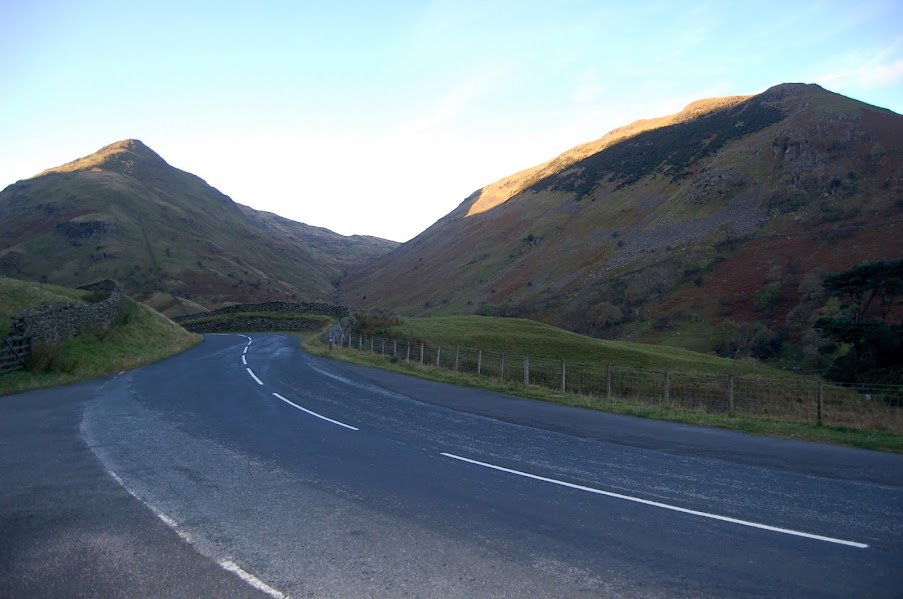 The route took us back up the road for a few metres and through the gates on the right. Following a number of yellow posts round to the bridge over Kirkstone Beck we then turned left on the path back towards the Kirk Stone for 50 meters before breaking off on a faint track up towards the bottom of the wall shown in the picture above. The route follows the wall all the way up the lower flanks, through a small clump of trees before breaking away up the right hand edge of the large grey rock face and onward up to the wall crossing the fell.

The path then winds its way over a number of small humps up towards Middle Dodd summit. Plenty of breathers were required as this is a steep, persistent climb with very little in the way of any flat surfaces all the way to the summit. The views back down to Brothers Water improve all the way up and about half way up St Sundays Crag shows its face above our descent route of High Hartsop Dodds ridge over Scandale. 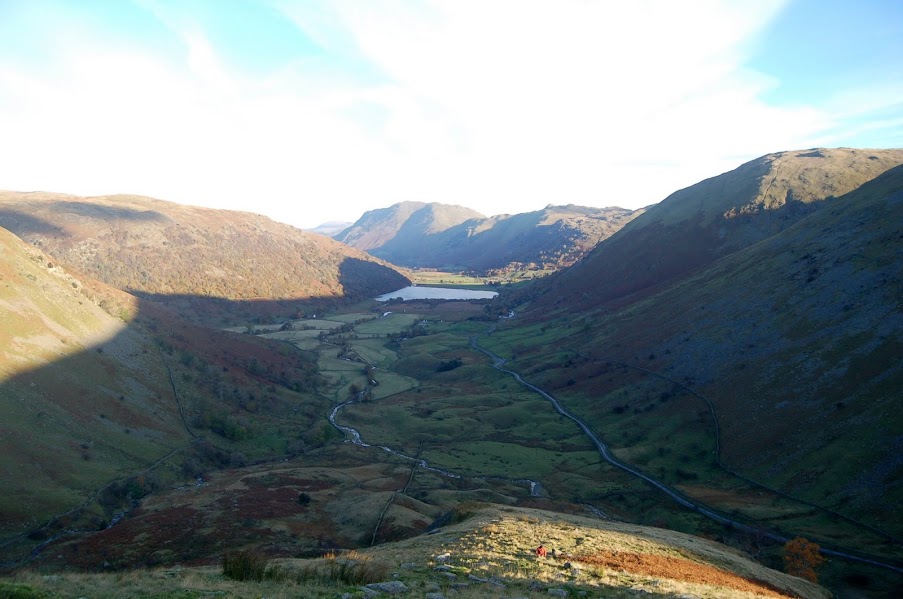 Middle Dodd summit is the first time that any level ground is found before the second stretch of ascent up Smallthwaite Band to Red Screes is tackled. This is less steep than the Middle Dodd ascent and half way up denoted today's frost line where the ground took on a white coating and conditions underfoot became a touch slippier. Up until this point the weather had been fairly kind but on Red Screes summit, the wind picked up and the freezing conditions started to bite. Therefore the photo shoot was brief and Damson escaped being lifted onto the trig point. In desperation to get moving again, I also forgot the small walk over to the chimney to get the views over Kirkstone Pass Inn. 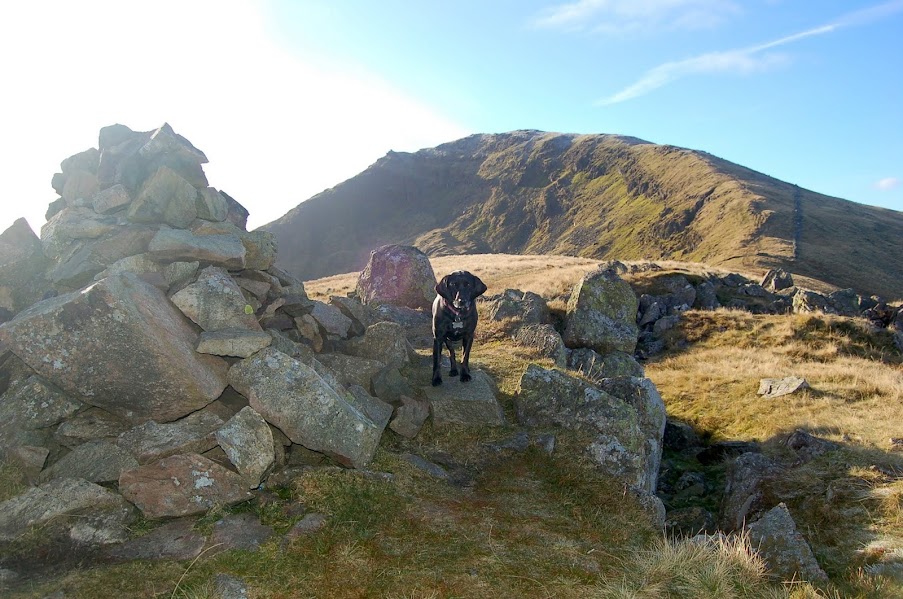 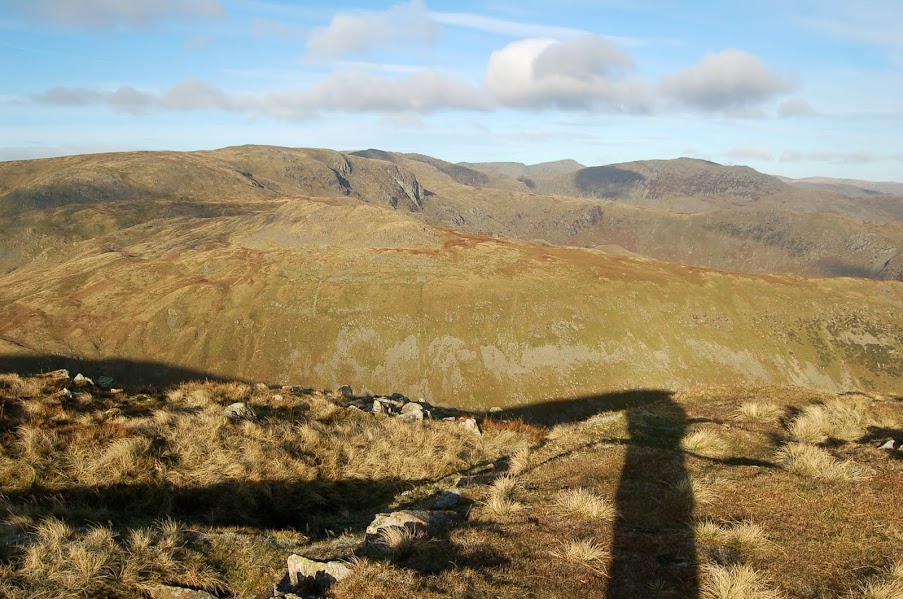 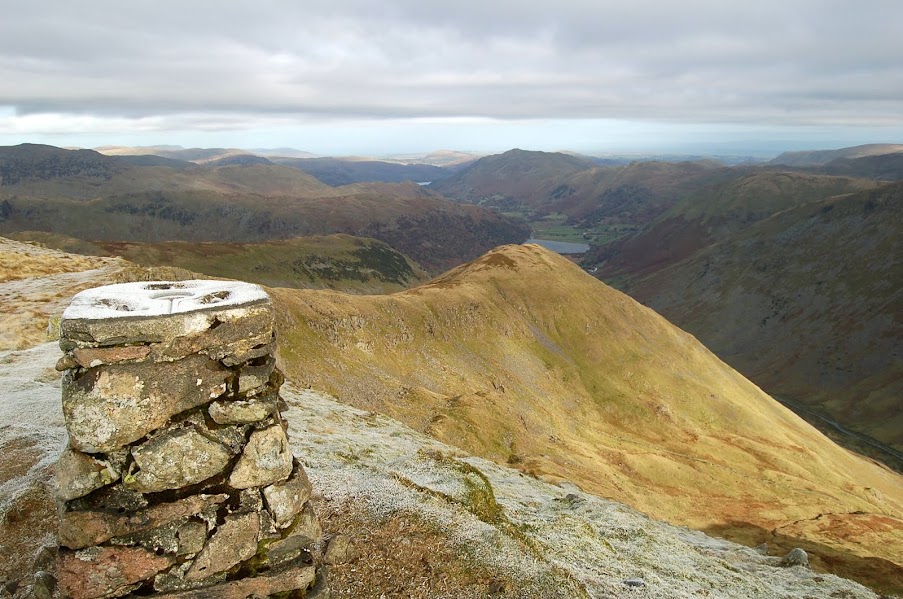 Looking over Middle Dodd towards Ullswater and Patterdale from Red Screes 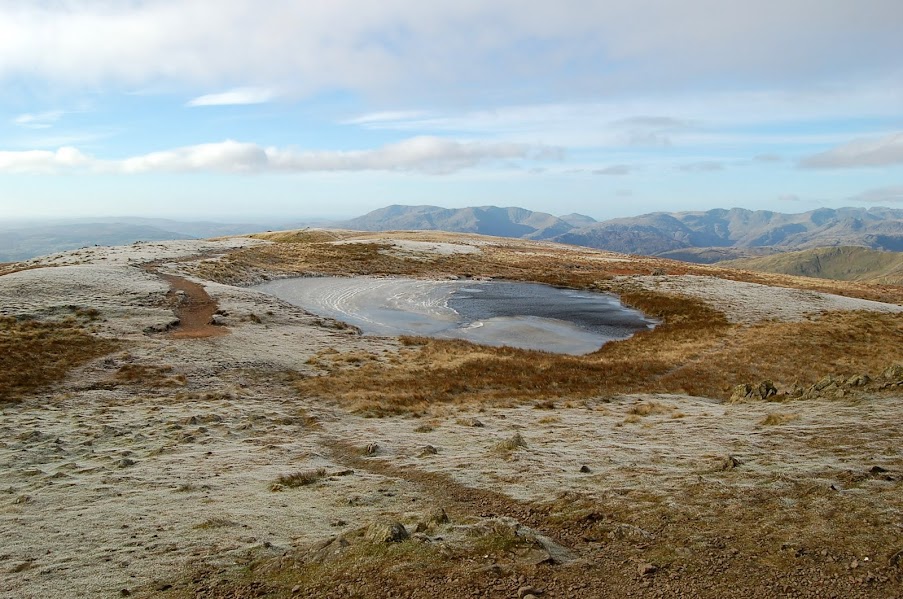 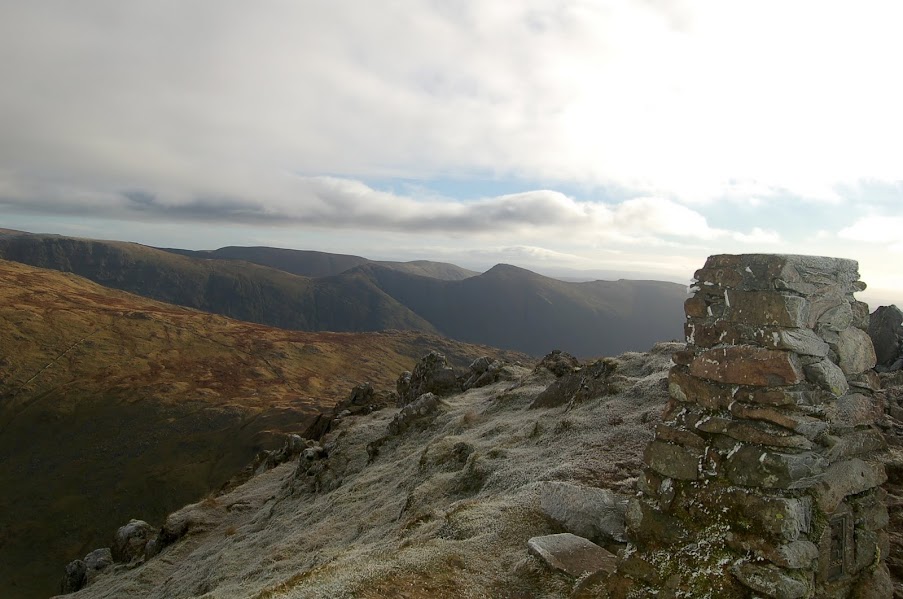 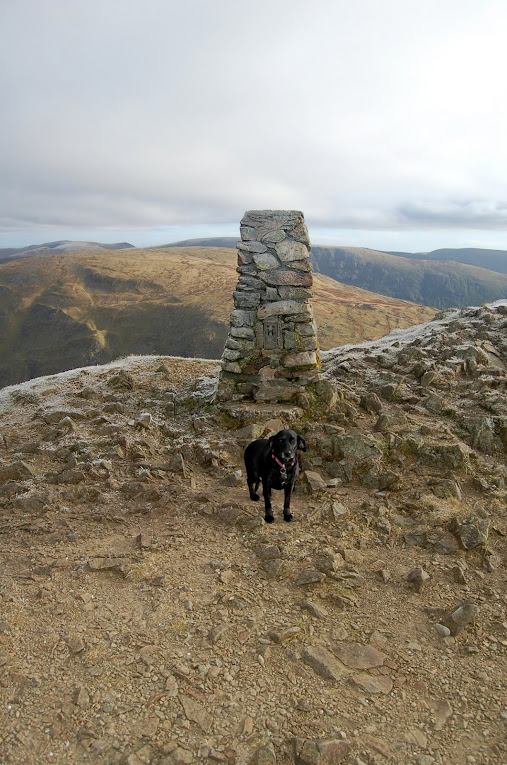 The passage down and across to Scandale Pass dropped us back below the frost line and conditions improved again with a bit of sun breaking through and adding some welcome warmth. Ahead lay todays third target of Little Hart Crag but a quick pit stop at its foot was taken to grab a bite to eat in the company of the Fairfield Horseshoe fells. Although this walk took 4 hours, a good 30 - 45 minutes of this was taken here playing with Damson and enjoying the tranquillity of our surroundings. Out of the wind and in a small sun trap, it was lovely. 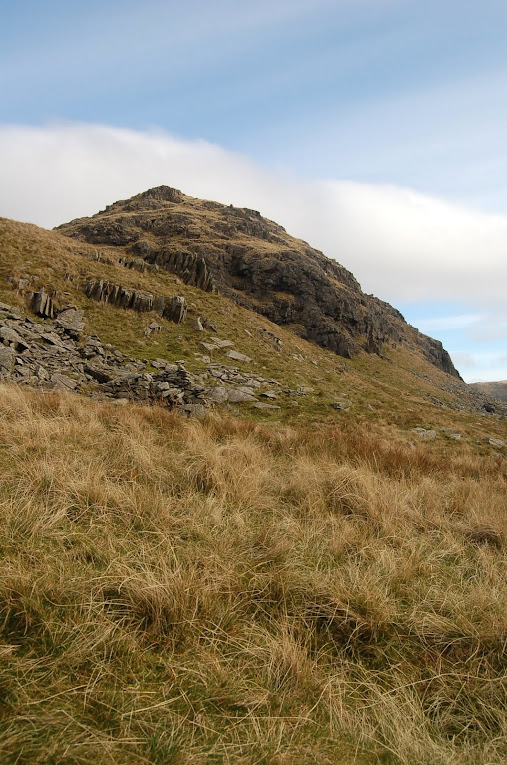 The last bit of climbing for today saw us on Little Hart Crag having great views to St Sundays Crag and back into Patterdale with only the downward ridge walk left to today's fourth and last summit of High Hartsop Dodd. 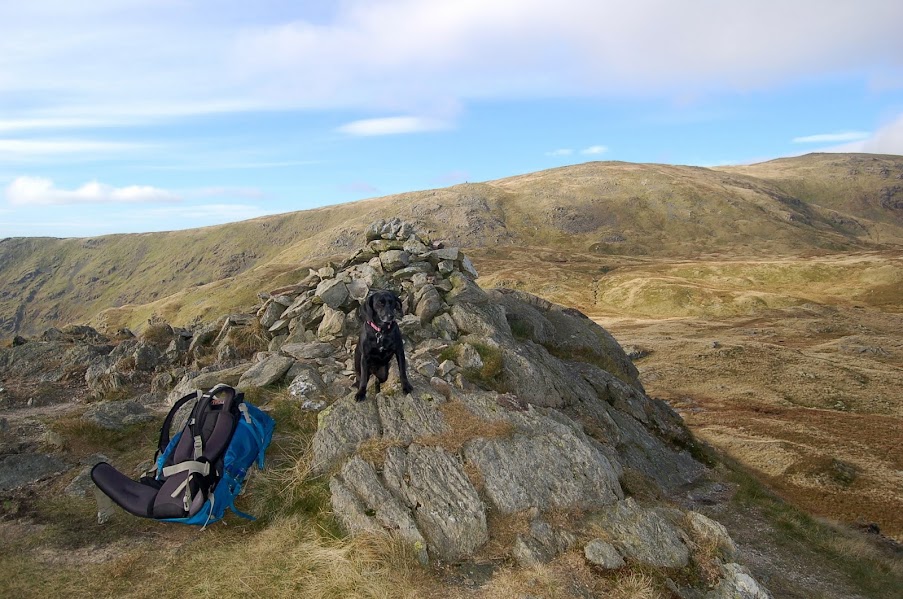 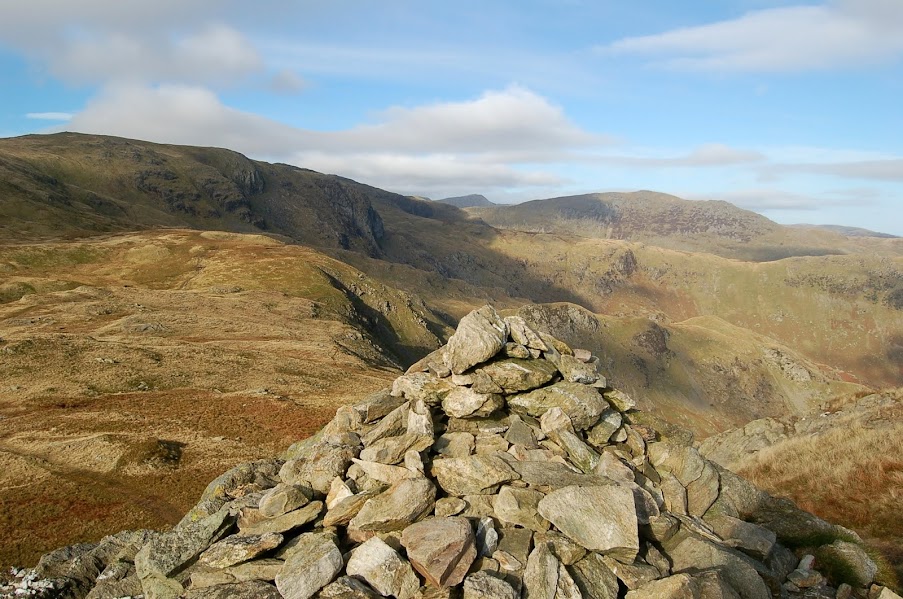 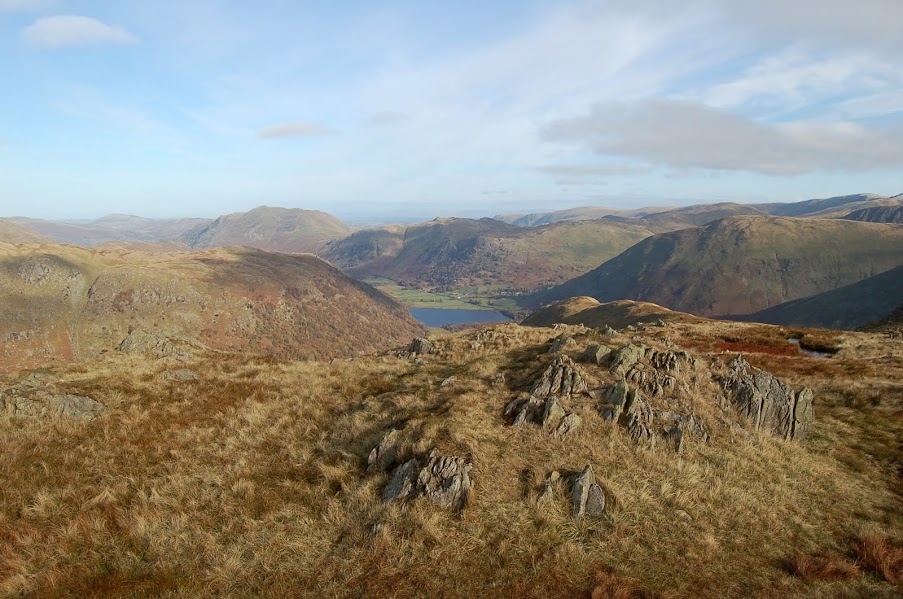 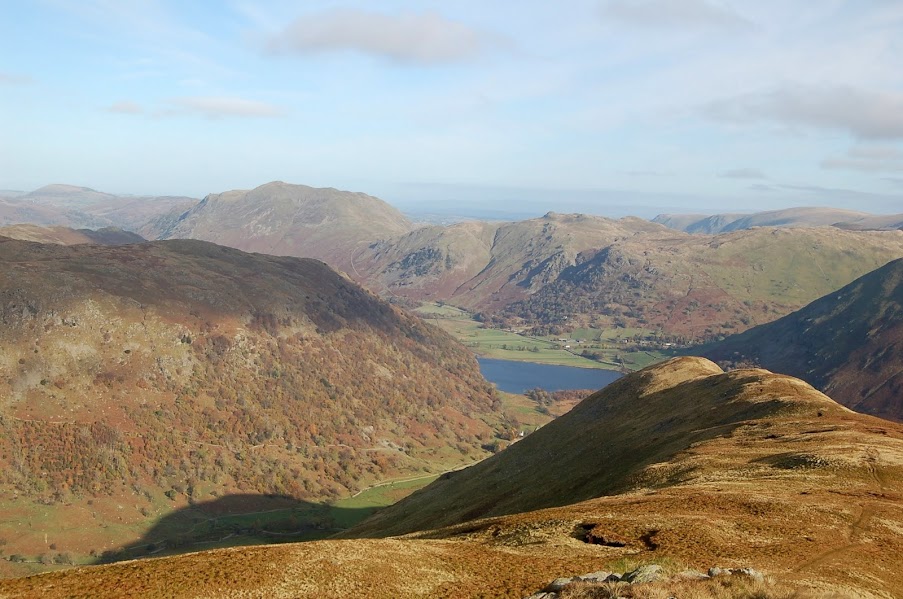 Walking down ridge to High Hartsop Dodd. (Hartsop Above How ridge on left - Place Fell, Angletarn Crag and Brock Crag behind Brothers Water) 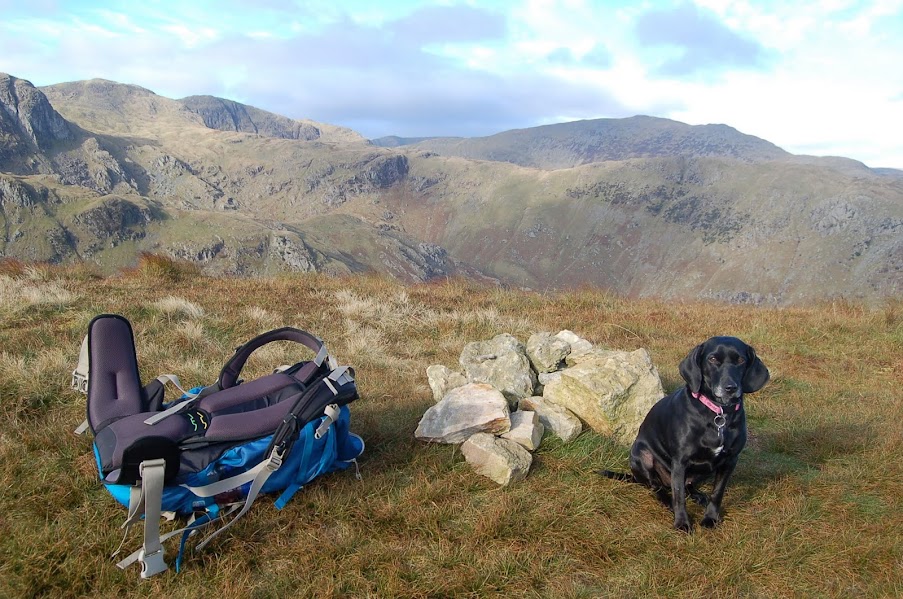 From here we could see the car to our right but our descent took us further north down the nose of the fell on a steepish path to a small barn at its foot. 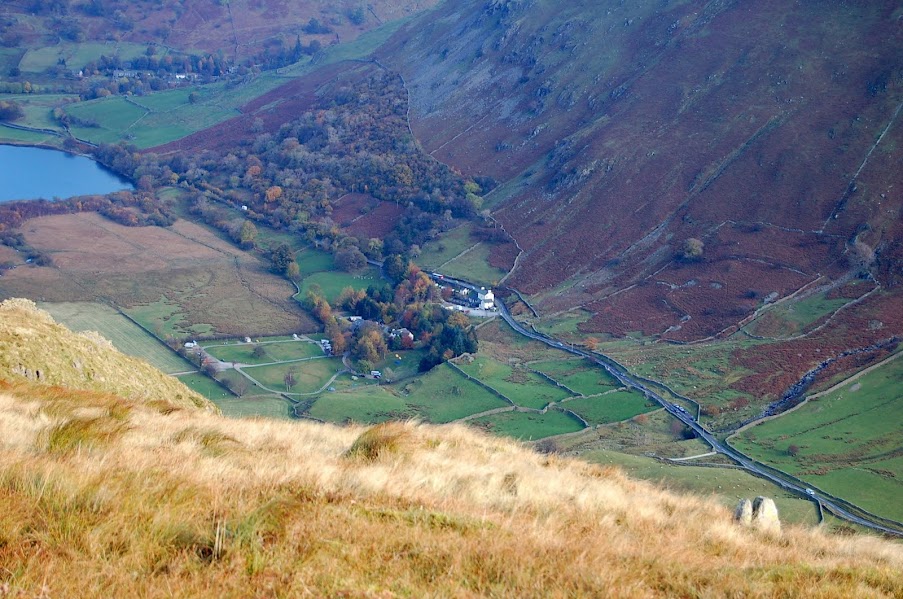 At the base of the fell we turned back right to pick up the path leading back to the Kirkstone Beck bridge running to the right hand side of the farm wall through herds of cows before heading back to the car.
The final photos of the day in winter midday sun were captured at the fell foot. 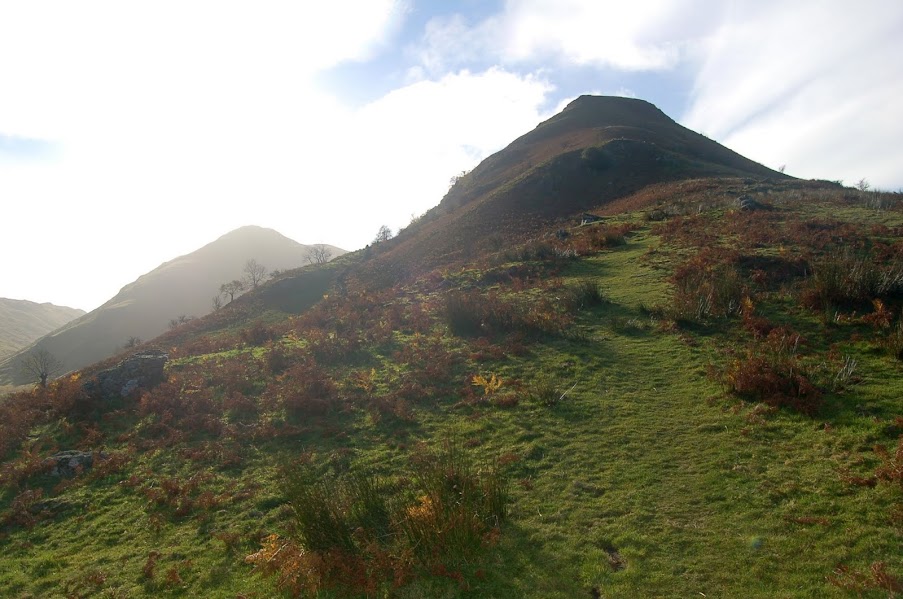 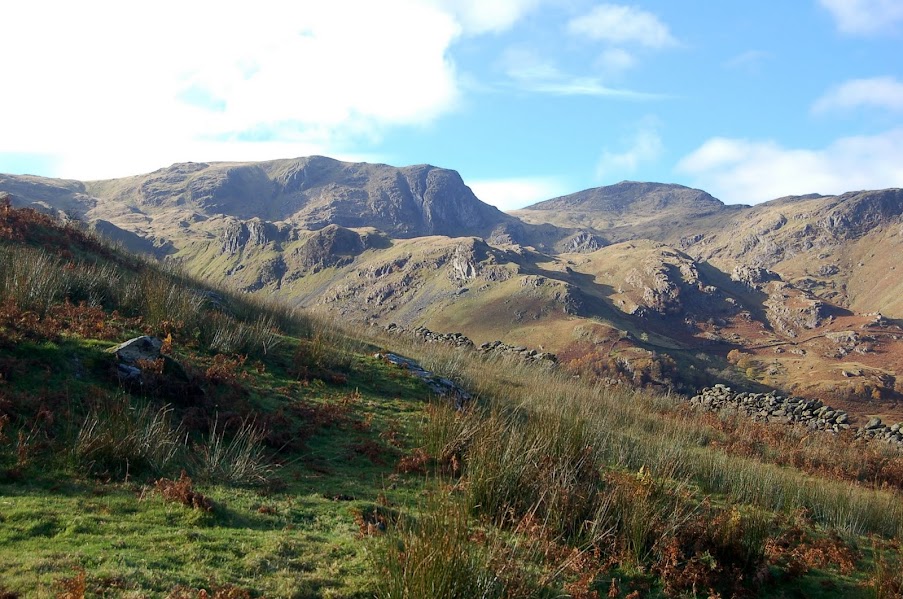 A nice little round in very cold conditions. The start is very steep and hard going and last for about an hour until it eases. The new trousers work a treat (only a tenner at Aldi this week) and Damson has finally warmed up again after a nice bath and a couple of hours in front of the fire.

I like the map, Craig, but will wait for the photos and report to appear

Hahaha, I must have been writing the blog as you posted.

Great pictures, nice report, and a walk I'd like to do sometime. I wish we'd been able to stay in Patterdale another day as Saturday looked like a great day for walking (but we had to drive home instead).

I wish we'd been able to stay in Patterdale another day as Saturday looked like a great day for walking (but we had to drive home instead).

Thanks Richard. I've taken a tour through your week and love the reports especially the tales of Sapphie. I don't have any of these problems with Damson yet as she's normally 50m in front of me leading the way

Phooooey wrote:Hahaha, I must have been writing the blog as you posted.

I was just too quick for you

Anyway, some beautiful photos, Craig, and such a great day to be out walking even if it was so cold

And where was Damson's to keep her warm????

BTW I recently had one of my photos chosen as the September image for the BBC Look North Weather Calendar
http://www.bbc.co.uk/news/uk-england-13712253

Great report Phooooey, beautiful photos, your pano on the link is a cracker. good to see Damson out and about again....she must love it, even if it is a wee bit chilly now and agian