Gaor Bheinn aka Gulvain aka Noisy Hill aka Dirty Hill

Gaor Bheinn aka Gulvain aka Noisy Hill aka Dirty Hill


Quoman sent me text last week, pick a hill for Saturday. Gulvain or Gairich would be good for him.... I had a quick look, didn't want to go back to Quoichside only a couple of weeks after having just been there, plus with snow in the forecast for the Northwest access to Gaor Bheinn/Gulvain is from the main road to Mallaig so, driving would be easier if the white stuff did come down. Plus the hill caught my attention as nobody seems to know what it's proper name is. Is it Gulvain? Gaor Bheinn? Even the Gaels seem to disagree about it's translation into English. Some say it means Noisy Hill, while some say Dirty Hill. So once again the 6am express heading north left still dark Stenhousemuir, this time bound for Loch Eilside and the multi-named Munro.

There is a big layby only yards down the A681 after it's eastern junction with the A830, so we parked up and were out walking at exactly 9am. Crossing the the road and walking to the right, past a couple of cottages, we turned left at the Right Of Way sign, following the route to Strathan, 10 miles distant in Glen Pean.

The route follows a good land rover track for the next few kilometres as it heads almost directly up Gleann Fionnlighe. The glen was replendant in the early morning sunshine, though it was still frosty.

At first the path is on the eastern side of the Fionn Lighe river, then it takes a sharp left hand turn and crosses a big wooden bridge onto the western bank of the small river.
However, there is a fainter track, falling into disuse, that continues on the eastern bank, before petering out by a stand of trees. For some reason, we took this path, as far as the point opposite the sheepfold north of Uachan. (Marked on the 1:25000 map.) Here we realised our mistake, the mountain was on the western bank!! D'oh!The river was too deep to ford here, so we had no choice but to retrace our steps back to the bridge and cross the river there.

It was a mistake that added around a mile to our journey and cost us about 30 minutes in time, so not too bad. The good landrover track makes for speedy going and we did our best to make the lost time up. We quickly passed Uachan, this time on the proper bank of the river; passed through two gates and reached the point where the Allt a'Choire Reidh flows into the Fionn Righe. The wee burn flows straight across the path and with all the recent rain it has flooded a good sized section of the track, so we had to dodge around the flooded section. Soon after, Na Socachan is reached, with it's wee cairn and the path forks. The right hand path is taken and shortly after, at another fork, the left hand path is taken. This time we made no mistake with our navigation.

At this point, Gaor Bheinn looms directly above you, but as we looked over to the Corbett Meall a'Phubuill, we thought that was Gaor Bheinn.....

Not so! We checked the map and sure enough the monsterous, plain, steep, steep and steep slope in front of us was the target for the day.

After climbing a short way we stopped at the only feature we could make out on the lower slopes, pair of boulders. Time for a snack before the onslaught began!
As we munched through our choice of hillwalking delights, we began to speak about equipment that I would need as I approached my first winter of hillwalking. Quoman had brought with him a pair of orange double glazed ski googles, just in case... After trying them on, I thought.... "Oooo, I could take a photo through them!" Here are the results

All too soon though, it was time to move again. At first the steep slope is a muddy quagmire and Gaor Bheinn lives up to the first of it's Gaelic translations as the dirty hill. Thankfully however, most of it was still frozen by the early morning frost. Gradually the path becomes rockier and steeper. All out psychological war begins. Man v Hill.


The most grinding part for me was knowing, that the top of the steep slope wasn't even the summit! It lay a further two peaks along the ridge. I wasn't admitting defeat however and slowly but surely inched my way upwards. In some places there is a decent path that zig zags up, but then it fades to near non-existance, before reforming again and climbing higher, before fading and reforming over and over. I thought, "even the path is tired of this slog uphill!"

Eventually the slope was conquered. Man 1-0 Hill! Goar Bheinn makes you work for every inch, foot and yard up it's southern slopes and it was a super feeling when I got to the top and view back south was pretty good too.

Over to the east Loch Eil could be seen and Ben Nevis looked King of them all.To the west, the forecasted snow was blowing in over Gaor Bheinn's neighbour, Braigh nan Uamhachan. Northwards, the southern peak of Gaor Bheinn finall came into view.

From the minor top, (it deserves a name btw) that the steep slope leads to it's an easier walk up to the southern summit of Gaor Bheinn. Here the wind was roaring and Gaor Bheinn lived up to it's other Gaelic name, The Noisy Hill. The snow had came on and was being driven in hard on the back of the strong winds. As quickly as possible we dawned our waterproofs, gloves, hats and pulled our hoods up.

From the southern top, the route follows a fine wee ridge, cresting a bump, before another final pull to the main top, thankfully none of this is as steep or as prolonged as the first slope.

After losing height from the southern top, the wind died down a bit and we made our way pleasantly across the ridge to the real summit of Gaor Beinn on it's northern peak.

The summit was pretty much clagged up, but we could just about see over towards Loch Arkaig and Loch Lochy throught the gloom and we caught a fleeting glimpse of Loch Shiel.

But finest view was back the way we had arrived, to the south summit and the Gaor Bheinn Ridge,

Since the snow had stopped and the wind much lighter, we sat in the shelter of the big cairn and enjoyed the rest of our food and a warming flask of coffee, before heading back off for the ridge and the long walk back to the car. The ridge is more impressive on the way back as you realise it's a lot narrower at it's northern end.

On the way down the steep slope, Scotland's default weather setting re-asserted itself. The rain turned the previously frozen ground into the muddy pit it had threatened to be on the way up, so it was with a bit of relief we reached the landrover road out and after a long march the car made for a welcome sight.

Gaor! I've Bheinn and Conquered That!

Nice report SL. Its a slog up the hill but the views are worth it. Not sure about the orange tint though

Good one guys,got this one on the radar so might be visiting soon,cheers

monty wrote: Not sure about the orange tint though

I thought it was rather fetching myself

Well done once again you two.

If you've got a bike, Defo take it for this one, would easily knock 90 mins and maybe even 2 hours off the time we did.

Gammy - I rather like the Irn Bru filter myself. It's phenominal!

Nice one ,She is a tough hill Gaor Bheinn i climed her in November last year in thick mist and snow

was glad to be back at the car and to have the bike for the road out .

Gaor Bheinn .... i worked in this area an the old fella's have her as the noisy hill, due to the way she catches wind

Nice report, enjoyed that very much

Nice report mate .... interesting photos with the ski goggles lol .... i used to have some filters like that ... didnt used them much though but i think they where meant to be used with black and white landscape photography to bring out the contrast between the reds and the yellows... or something like that

A similar day to ours, but less windy

So I'll plump for Noisy Hill as well, especially on the ridge to the summit

That was one of you best report very imformative..Don't know what i would call the munro maybe what a F*&*&%g slog..after you reach the bump at 845mtr or so the walk was very enjoyable thanks to the 3 guys from edinburgh for taking our picture at the top.
here's some more pic's the carpark just of the main road 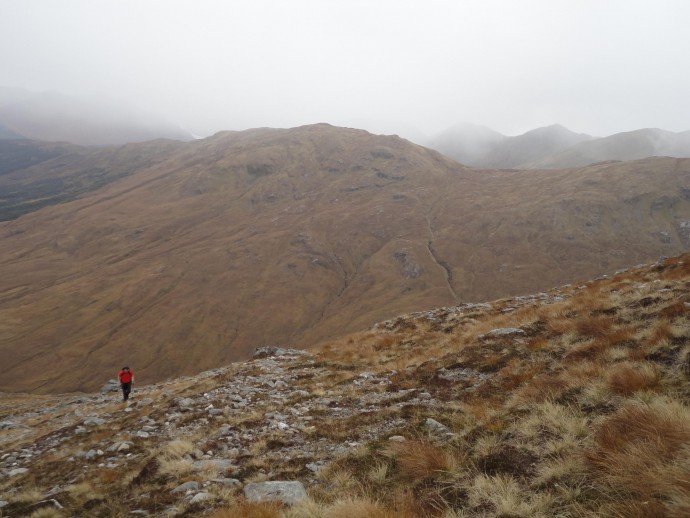 SL on the way up 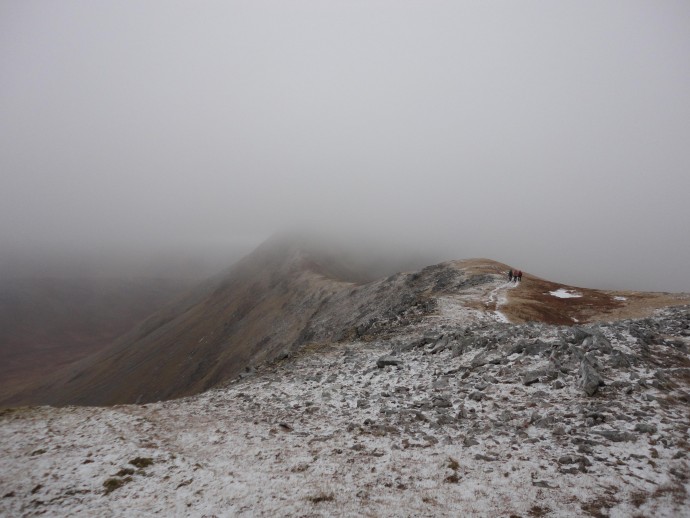 looking back along the ridge , youre fairly rattling them in now, well done

nice! that was an enjoyable read,well written-brings back great memories!

i'l never forget this hill,
i hit the 200 mark on Gulvain,it was a special day