Arrived at the Reindeer centre for about 0745hrs where I waited in the car to see if Rudolph and co were about but no joy this time. It got light about 0830hrs so it was time to move! I was still pretty tired on this particular Sunday morning but two fierce sounding friendly labradors woke me up rapido as I made me way past the last sign of life for 10miles. Very interesting path up through the trees and towards Lochan Uaine with decent views over to the Cairngorms. Passed Lochan Uaine with Creag nan Gall leaning over it and a sign letting me know Ryvoan Bothy was not far away. On arrival at the bothy I had a scout around outside, not satisfied with the perimeter check I went in to find a couple of full sleeping bags and a faint smell of farts! I was going to take a photo but there is probably a law against that! lol From the summit I could quite clearly see the route of the traverse across Creagan Gorm towards Craiggowrie, unfortunately by the time I hit the peak I discovered my hat had dissappeared so my swede was baltic. No time to hang around as the Everton game was on sky! Got some nice views of Loch Morlich whilst doing this traverse. After Craiggowrie the descent was very boggy and my feet took a pounding but hey ho, it was the last 4kms The final straight took me through the forest and past Badaguish Outdoor Centre, arriving back at the car in time for two egg sandwiches and a can of irn bru! 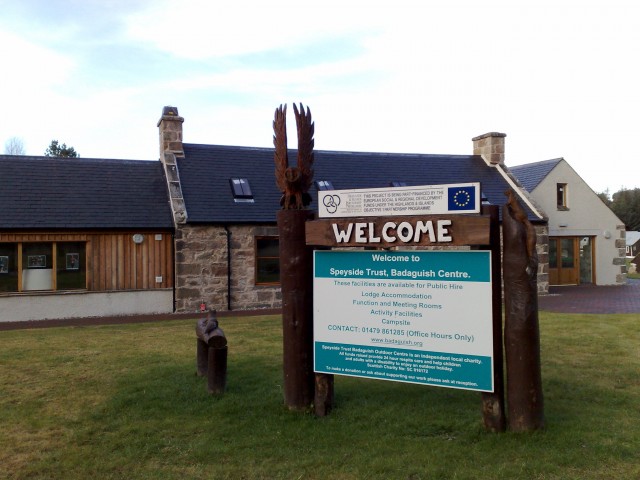 Sid, Everton are on again in 10 minutes and I only hope the result is as good as your photos COYB

Aye, get down to Goodison as much as possible but living in Nairn its only about 3 or 4 times a season pal! COYB!

0-0 and an 'interesting contest so far. Live a lot closer than you but becoming an armchair fan because the lure of the hills is too strong - shame on me!!!

How is Nairn? Son lived in Elgin for 6 years and it was ALWAYS a pleasure to travel north for parental visiting rights....

Turned out an entertaining game with a worthy point for us! Phew!
Nairn is sound, originally from Inverness but moved out 5 years ago for the quiet life.
Its not a bad location for these here hills too! Starting off bagging these Corbetts for now solo, with the Munros starting next year with some ex-army pals.

Nice report Sid, I enjoyed this walk when I did it a month ago on a fine day (report in my profile) and even got the bothy all to myself - no farts on that day! It's definitely a bog-fest path on the descent! I let my guard down at the very bottom by that big tree just as you enter the forest and nearly lost my leg in the last bit of bog! I met a few people ascending from that direction who didn't look too chuffed with the path up

I know I took my time that day (6 hours inc stops) but you must have hammered round to do it in 3 hours?

Hi HighlandSC! I read your report prior to deciding on which one to do, really enjoyed it. Nice photos you take pal, a far cry from my camera phone but didn't have time to hang around on this occasion!

I only saw three folk out during my trek (well five if I include the bothy brigade). Doing the 15 mile Tomintoul Spur tomorrow, followed by Carn Mor on Wednesday so I'll stick another couple of reports up on Thursday!
This website is the business, with you being just along the road in Sneck we should get a hill or two done soon. What ya reckon?

Hi sid, I like to try and get good pics but don't take it too seriously - I've just got a decent compact digital camera which does the job for me. I'm sure we can get out at some point (especially if you have a car

I do drive but sold my car recently and not planning another any time soon) but I'm pretty much done with walking until the new year, and even then I'm not equipped/skilled to go out in the snow up high....are you? I'm getting good at navigation but only started walking a few months ago and still teaching myself more each time. I'm not only interested in munros or 'list' hills as you'll see from my Walks Diary so will consider anything. Give me a shout in the new year if you're making any plans

If you're looking for regular walking partners, or getting a bigger squad together then you might want to try posting in the Meet up with other Walkhighlands users forum. Cheers