Our third outing in a row in Strathcarron with MWIS once again forecasting 80% cloud-free Munros. Beinn Liath Mhor was my number 207 and Sgorr Ruadh was my 208th Munro. Does anyone else remember listening to Radio Luxemburg ('Fab 208') on a transistor radio under the bedclothes as a young teen? Sorry - just showing my age there, but it really WAS a fabulous 208th mountain, though a pretty strenuous day.

If only Munro-bagging was always in weather like this ... but, then again, would we get bored if we had blue skies every day? I've had some great walks on days when I didn't feel there was much point in getting out the camera to record the mist, but we still had magical moments when light shone through clouds and made the hillsides glow, and it's always a delight when the clag suddenly lifts and you get to see where you actually are for 2 seconds. I suppose you wouldn't REALLY appreciate the cloudless days if you didn't have the experience of not so fabulous conditions. In fact, the next outing we had, two days later, up Moruisg and Sgurr nan Caennaichean was back to the default setting of staggering about in rain and cloud from about 500m upwards. This then turned into horizontal sleet and a buffeting wind on the way up to the second summit which only abated on our descent when the skies suddenly cleared and our summit experience felt like a bad dream.

Anyway, we were almost getting a bit blase about all this spectacular scenery and wonderful clear skies - views to Skye blah blah, Beinn Eighe shining white blah blah, jaggedy An Teallach blah blah - after our 2 previous outings on Maol Chean-dearg and Sgurrs Choinnich & a'Chaorachain. But we knew that this was going to be a great day out and one to remember. We set off from Achnashellach at about 9.00, across the level crossing and on to a forest track that soon became a lovely riverside walk with Fuar Toll rising in front of us through the trees. The path was great, really nice going and dry underfoot, leading us up to Coire Lair. 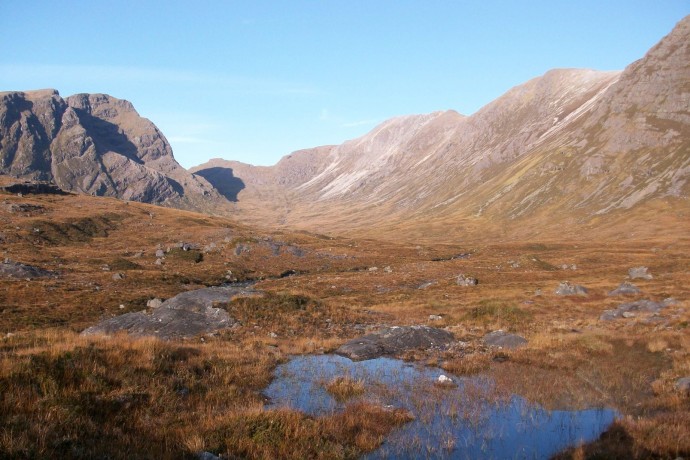 The air was fresh but as we climbed in the full sunshine it got hotter and hotter. The ascent up the front of Beinn Liath Mhor was pretty brutal, it was a relief when we finally got to the cairn at the south end of the ridge around 11.45. 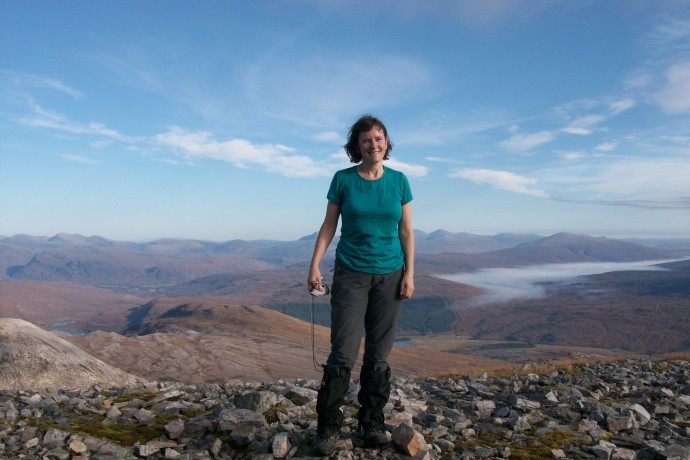 Me at the start of the summit ridge, mist in Glen Coulin behind 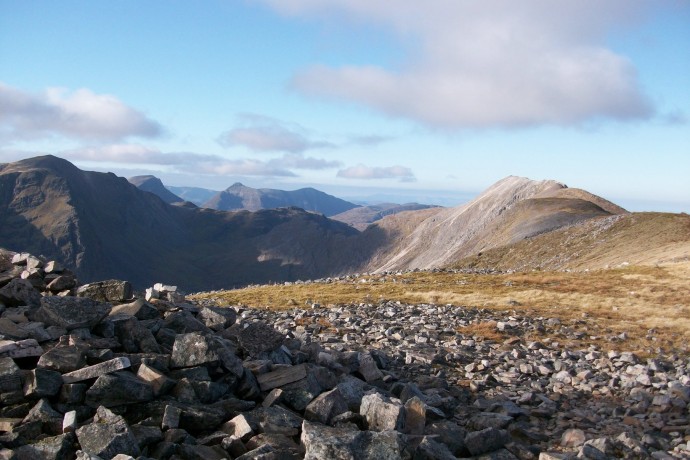 Our ridge for the day - Beinn Liath Mhor on right, Sgorr Ruadh on left 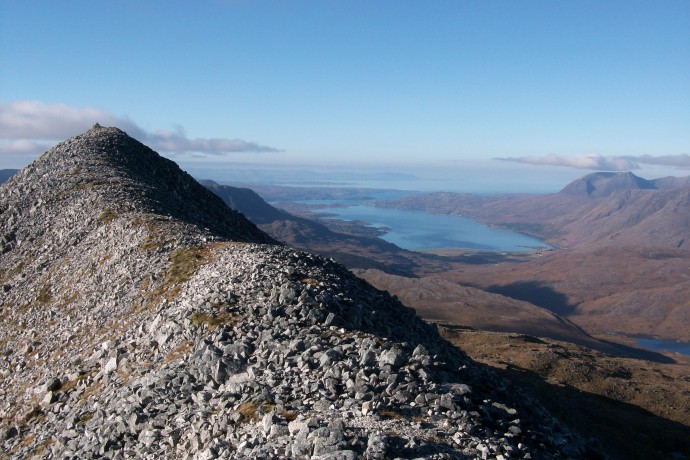 We stopped for our first lunch and had a chat with a guy who was breaking in new boots and feeling the pinch a bit. Ouch. This was quite a tough route and rather hard on the feet as it was mainly on rock. Still, we saw him plodding along behind us as we went around, so at least he got there and hopefully the landscape took his mind off the pain! Anyway, taking it nice and easy we pottered along the ridge to the summit, taking in the spectacular views over Torridon and beyond. 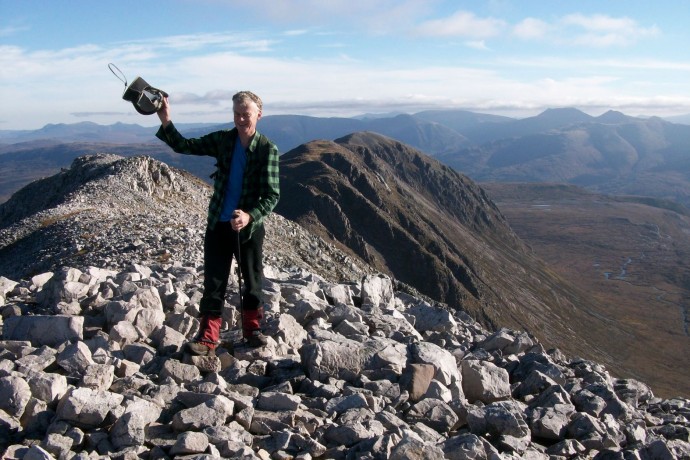 The Bruce salutes the summit of Beinn Liath Mhor 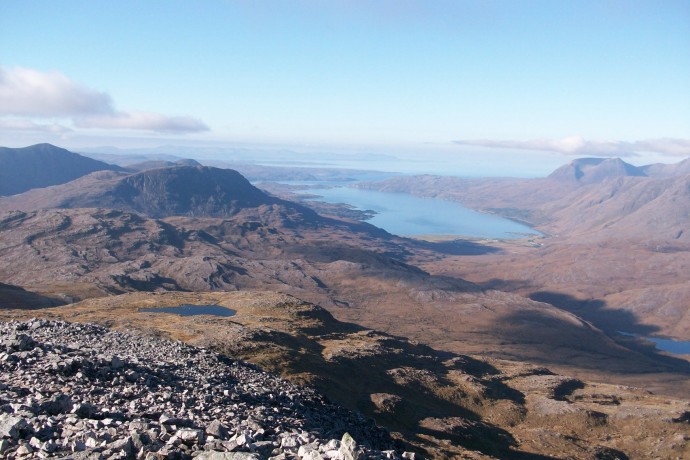 From there we strayed a bit from the main route due to lack of attention, but we worked out where we were and quickly managed to find a cairn to show us the easiest way to get down the great sandstone slabs to the bealach. This would certainly be a challenging route in mist, though we would have been paying a bit more care too. Anyway, we crossed over the pass and up the steep grassy slope towards Sgorr Ruadh. This soon turned into another rock-hopping fest up to the summit. 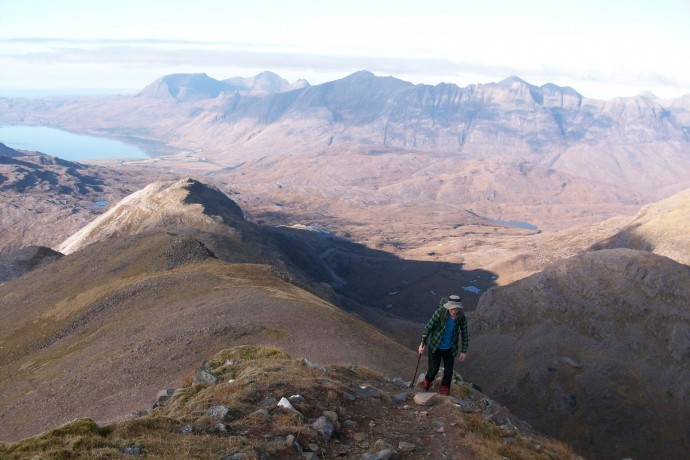 The Bruce heading for Sgorr Ruadh summit, Liathach behind 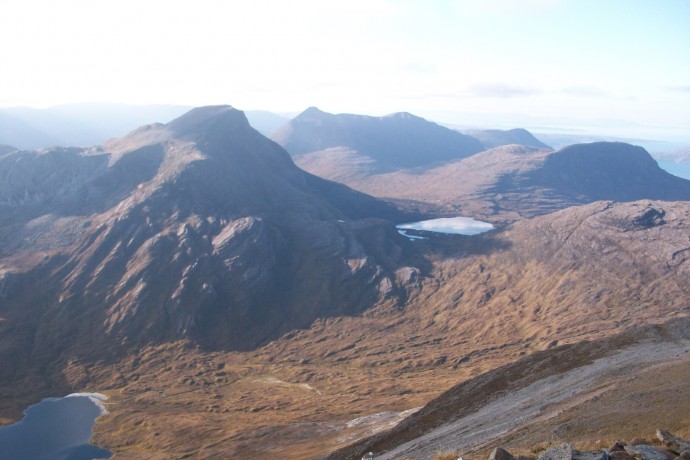 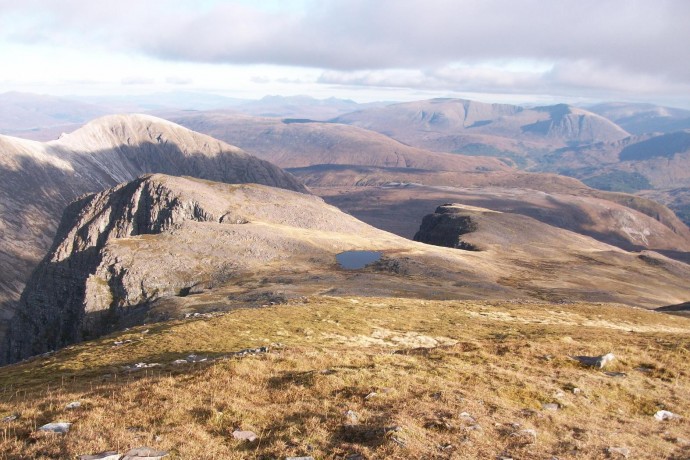 Sgorr Ruadh summit plateau and crags, Beinn Liath Mhor beyond on the left

Another great panorama from the summit of Sgorr Ruadh, time for a lengthy break with a flask of tea, some muesli bars and the emergency chocolate. We had set off that morning with the idea of the two Munros plus potentially climbing the spectacular Fuar Toll as well, but once we got to the second summit we decided we'd like to save that one for another day. We were on holiday after all! So we headed downhill to the bealach between Sgorr Ruadh and Fuar Toll, which is full of bumps and lochans. We'd plotted a diagonal route across it from above, but it was a relief to reach the stalkers' path down into Coire Lair. Then a pretty straightforward walk out, enjoying those autumn colours around Achnashellach. 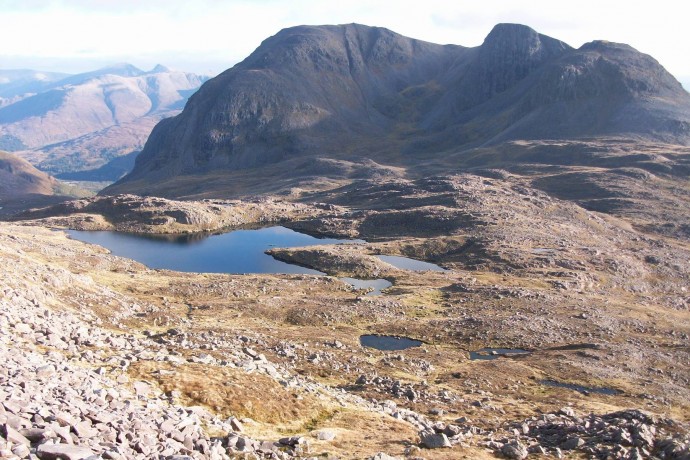 Fuar Toll and the bumpy bealach 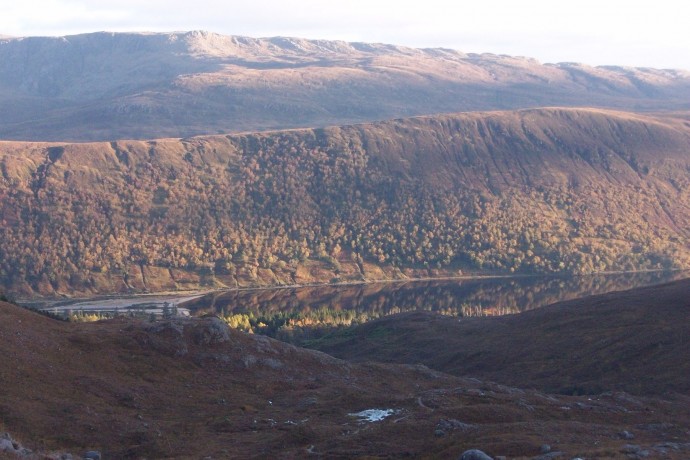 We were back at the car just after 5pm. Tired, but sated with sunshine and wide vistas. Dry feet, no waterproofs used - third Quality Hill Day in a row!

Great report, wonderful photographs on what looks like a superb day on the hills

, could it get any better. Hope you get the same weather when you bike out to Maoile Lunndaidh, make sure you go after a dry spell it's very wet at the approach. The bike's a must it will save you a couple of hours at least

Look forward to seeing your report in due course.

Thanks for your comments, Rodmiester and Irene. Yes, it was one of those days which makes the slog up all the more worthwhile!

Oh yes, this is what it's all about

Sgorr Ruadh made up for it though. Good to see you have such good weather for this route though

Thanks Lenore, and Pete - I too have found Walkhighlands trip reports to be very useful for letting me know what views I haven't seen on the day I was doing the walk!

great report and pictures looks like the snows not there yet

What a fantastic day the both of you had the rigde walks look magic cant wait to get up that bit of scotland might be next year now.

rjpatyou - there was snow in Torridon a couple of days after this trip. I did this walk on Tues 23rd October (inadvertently put the 1st Nov on first version of my posting which may have been a bit misleading) and on the Friday of that week (26th Oct) we had constant snow showers, some quite heavy, with bright sunshine inbetween. We drove over to Torridon village, since it was a rest day for us, and the mountains were looking absolutely stunning when the sun came out!

Fab report Helen and stunning pictures. It looks like summer and it is only 2-3 weeks ago!