off track on glas tulaichean

off track on glas tulaichean So for the first time of the winter we knew there would be snow on the hills.
Love walking in the snow; it's so great to see the hills with their winter jackets on. Off we headed, in the middle of the night to sample the delights of 3 munros from Dalmunzie Castle Hotel at Spittal of Glenshee.Well, the best laid plans o' mice and men gang aft agley.. The line from Burns is quite a good one to bear in mind when preparing for walking in winter. It's good to have a Plan A, B and C in place because the transformation of landscape and the unpredictable weather that comes can make what might be a straightforward summer walk into something altogether more challenging and interesting. The GPS was loaded up with a track I had found which at first glance looked fine, but actually it was only an impression of a walk and turned out to bear no real resemblance to the actual route involved. Lesson duly learned: combine a dodgy GPS route and a dodgy MWIS report and the result may just be one munro bagged via a bizarre thigh-burner of a route and finished off with an icy river crossing in pitch black at the end. Great fun! It was obvious from early on that the GPS route was no good and because we had gained a bit of height already, we decided to head east directly onto the top of Creag Bhreac and move north west from there to Glas Tulaichean. actually, obvious route may have been better

This was Plan B. I hoped that it would take us over a Corbett but turned out not to be...Oh well I think it did make for a more interesting way anyway. Mind you we were privileged to see a Golden Eagle soaring away into the white beyond so that made taking the path less travelled worth it. enjoying the end of the ascent and looking forward to finding our corbett cairn... but of course, it wisnae there...

Any onwards we went and after a tough hike in very little visibility and thick snow, the top of Glas Tulaichean emerged. In the biting cold and the absence of views, it was here that we opted for Plan C. Carn an Righ and Beinn Lutharn Mhor could wait for another time. 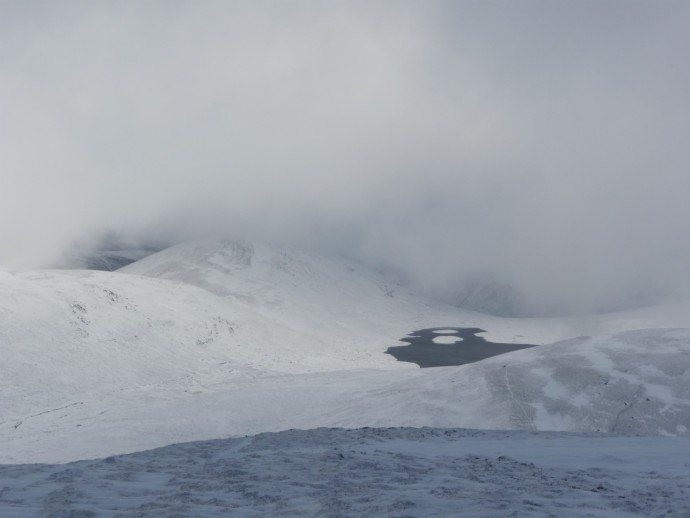 a view! over to Beinn Lutharn Beag monarch of the glen, surveying his domain

Common sense told us to exit, via the track beside the Alt Ghlinn Thaitneach. Back on level terrain we enjoyed the sight of a massive herd of deer on the slopes to our left. Easily 200 of 'em. 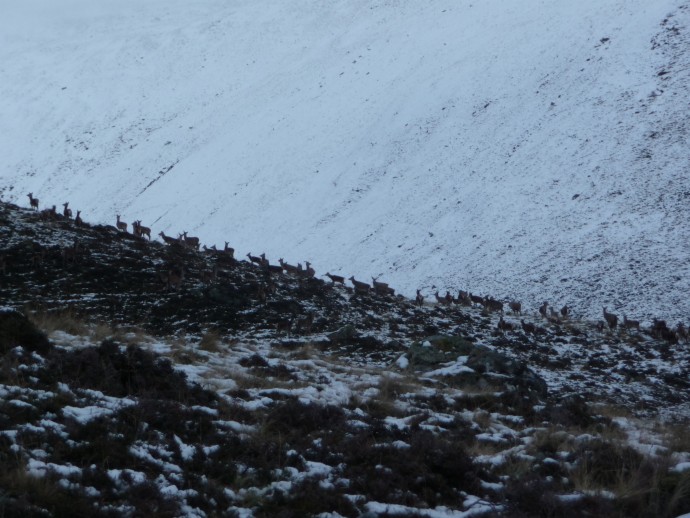 snapshot of the huge herd of deer 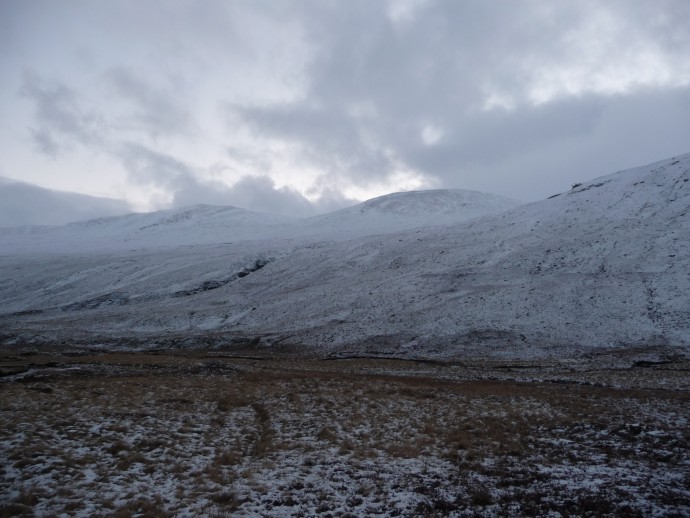 our approach took us over these two tops (left to right)

To conclude our own hand-knitted route, we scooted across the river south-east of the hotel, head-torches lighting us across. 'Twas fairly wide, but shallow. We were back at the car, with feet dried by 6.30pm. Good start to the winter season. I'm glad that my photo came out! It's a bit troublesome using a wee compact camera with big mitts on!

If you look carefully, you're both visible on the top of the shoulder in this shot here:
http://www.flickr.com/photos/maccookie/8154454749/lightbox/

I take it that you didn't find the bridge that crosses the river upstream of the hotel then?

That was a good read! Glad you had fun!

MacCookie wrote:I'm glad that my photo came out! It's a bit troublesome using a wee compact camera with big mitts on

Ha, yes thanks for that Ewan. Less of a smile for me and more teeth clamped shut to stop the chattering. I think mitts may be the way forward this season. Nice to bump into you

PS yip, we totally missed the bridge and rather go back and look for it (about 0.6km back up the track) we opted for tiver crossing and fence climb back to road
Last edited by gordon l on Sun Nov 04, 2012 10:33 pm, edited 1 time in total.

That was a good read! Glad you had fun!

Many thanks, Paula. Definitely a fun day out

best stick with the old map and compass dude

best stick with the old map and compass dude

Aye, wise advice as always old bean. Look forward to learning more from your good self