Sgairneach Mhor (First in the snow)

Sgairneach Mhor (First in the snow)


I spent 40 minutes doing what I thought was a resonable report on this mountain (my first in the snow) and when I was loading the third photo I got a message saying the file was not valid. No problem I thought I go back and take that photo out, no chance I had lost the lot. Is that meant to happen?
Here is a shortened version of my report. Left layby 79 on the A9 nice and early feeling a bit apprehensive when I saw the amount of snow never mind, onwards and upwards. I walked along the good path by the Alt Coire Dhomhain burn and admired the deer along the way. I decided to take the second bridge as I thought the first headed more in the direction of the Sow of Atholl, this took me almost straight to the summit although the track stopped and became a trudge through the heather. About 700m up the cloud was down with visibility at about 10m coupled with this and the fact I had fallen face first into deep snow several times meant I was having doubts about going on, however I saw this as a test of my navigational skills and decided to press on. Once I saw the crags of Coire Creagach I knew I was okay and a short time later i reached the summit. I started to head down and saw three walkers coming of what I think was Beinn Udlamain and shortly after things went slightly wrong. I drifted too far to the right and when the cloud eventually cleared realised I was looking at the Alt Dubhaig Burn and the A9 further south than I had attended. Not to worry I followed this to the Dalnaspidal Lodge where i met Killty Biggles coming off a corbet He was going my way and kindly gave me a lift back to layby 79 and my car. Thanks Alan it was appreciated. Given that this was my first solo walk in the snow I was please with my walk and in the main my navigation. Thanks again to Alan. Incidentally I found a pair of crampons on the hill so if they are yours PM me with a description, I have saved this to draft so will try again with the photos. Deer on the hills 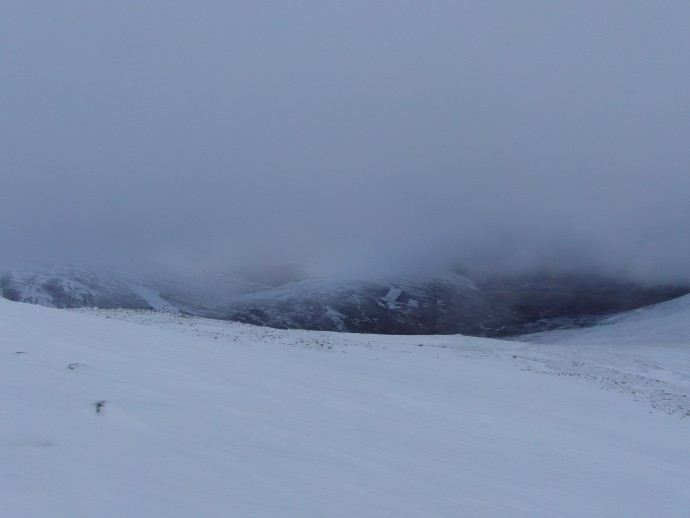