The tale of two towers

The tale of two towers


This story is a second part of my Carn Daimh report from 21 October - I'm constantly behind with writing, just struggling to find time to do it, now with two more walks last weekend (two snowy Corbetts ha ha ha!!!) it's going to take even longer to catch up...
So apologies for the backlog, I'm doing what I can

Having climbed Carn Daimh on a lovely Sunday morning, we still had a couple of hours left to lurk around in the area of Glenlivet. My suggestion was visiting two interesting ruined castles: Drumin and Blaifindy. They are perfect examples of how to save a listed building (Drumin) and how to lose it (Blairfindy). Being such a ruin freak, this double exploration was a real treat for me!

DRUMIN CASTLE
The first part of "the tale of two towers" tells the story of Drumin Tower. We had visited it before, in November 2010 on the way back from climbing Ben Rinnes. It was a grey, gloomy day and not much light for good photos

I had nothing against a re-visit in lovely sunshine for some better photo shots.
The castle is situated at the top of a natural embankment , near the village of Glenlivet and 9 miles from Tomintoul. It can be included into a longer walk, but if you are only interested in visiting the ruins, a large car park is provided at the bottom of the mound (on the road linking B9008 and B9136, just by the bridge over the River Livet).
The castle is well cared for, open to the public all year and free to explore - just note that it stands very close to a farmhouse and parts of the surrounding gardens are private.
My "castle bible", THE CASTELLATED AND DOMESTIC ARCHITECTURE OF SCOTLAND FROM THE TWELFTH TO THE EIGHTEENTH CENTURY (DAVID MACGIBBON & THOMAS ROSS), includes only a short description of Drumin Tower and sadly no drawings for this ruin, but the information suggests that it as such hasn't changed much since they visited it in the late 19th century.
"The remains of an ancient keep which stood on the height above the junction of the Livet with the Avon, about four miles up from Ballindalloch. It was apparently a simple castle of the Second Period, having walls 7 feet in thickness and measuring about 53 feet by 38 feet."
Wow, that sound like a formidable fortress!
Getting to the ruins requires a short, steep climb up narrow stairs. The tower dominates the view when looking up... 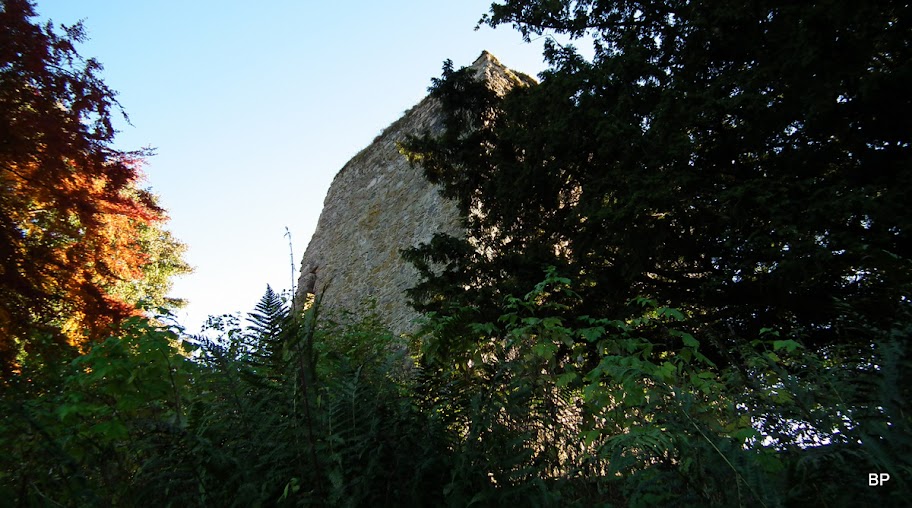 The mound is a good viewpoint: 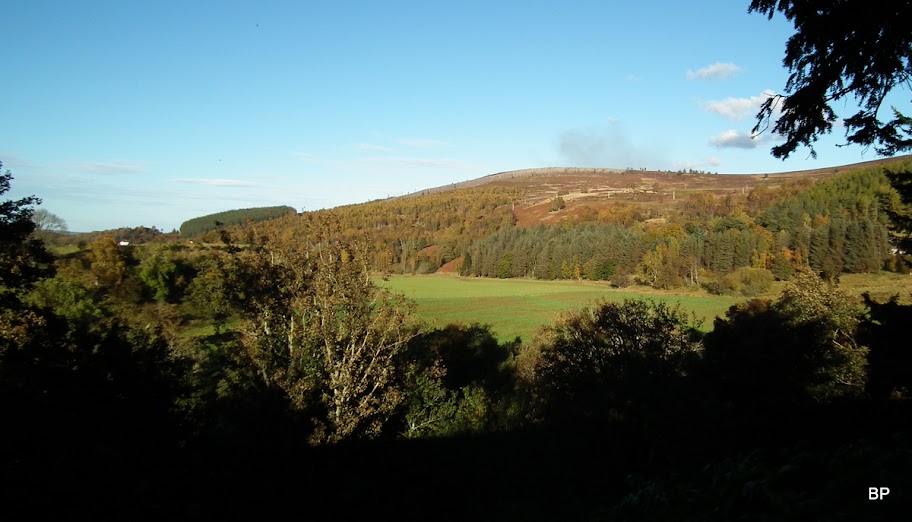 To embrace the whole structure from the distance, it is better to start exploration from the walled garden (path and signposts provided

). Here, one can sit on a bench and enjoy the quiet surrounding or simply stare up-up... 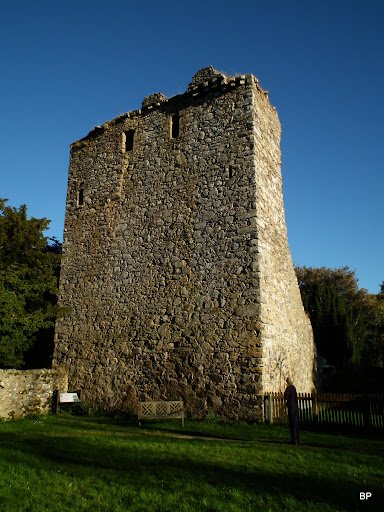 From this side, the walls are complete to the very top including the corbels, as MacGibbon & Ross describe:
"The ground floor was vaulted and provided with loops. There now only remain two walls and a part of the third. The former are preserved as high as the corbels of the parapet, some of which still exist, and are of a plain early form. The situation is fine, commanding three valleys, and the ruin is surrounded with large old trees. This was anciently the seat of the Barons of Strathavon, descended from Alexander Stuart, fourth son of Robert II." 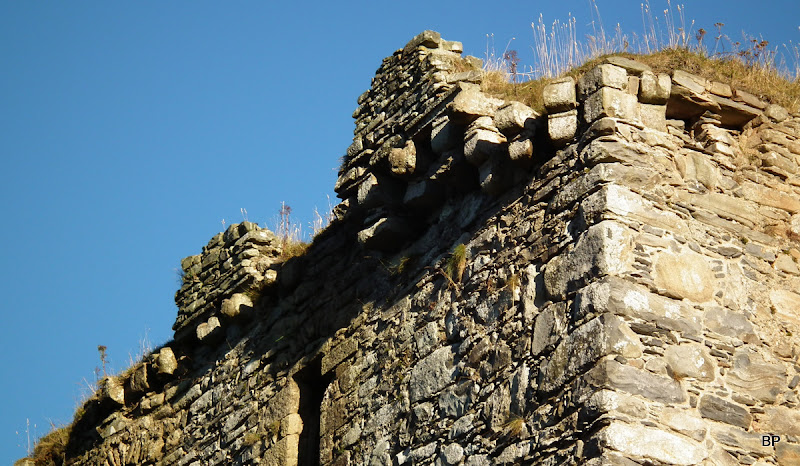 To have a look inside the structure, we left the walled garden and followed a path around the ruin. Really, it makes one feel so small... Big, tall building! It must have looked fantastic when it was still complete! 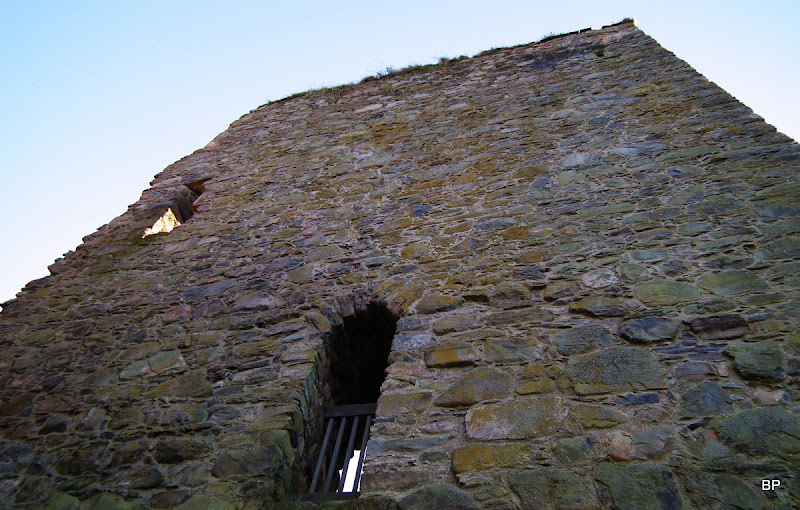 A view from around the corner: 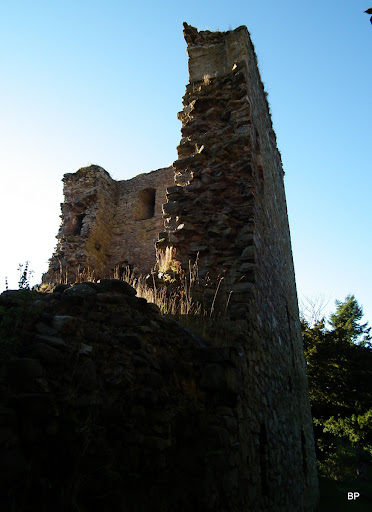 Looking up to the first floor level: 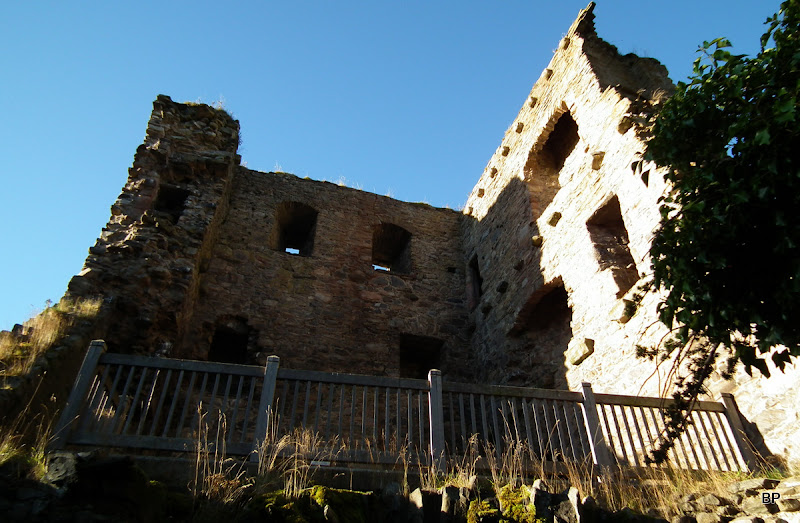 The existing parts of the castle, as I mentioned, are in good condition and it's possible to safely venture into the building. The ground floor level was probably used as a kitchen and the vaulted celling survives: 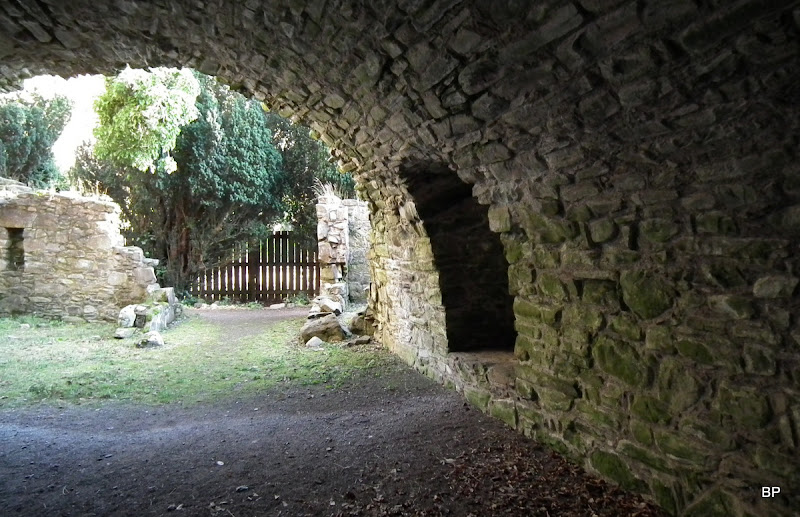 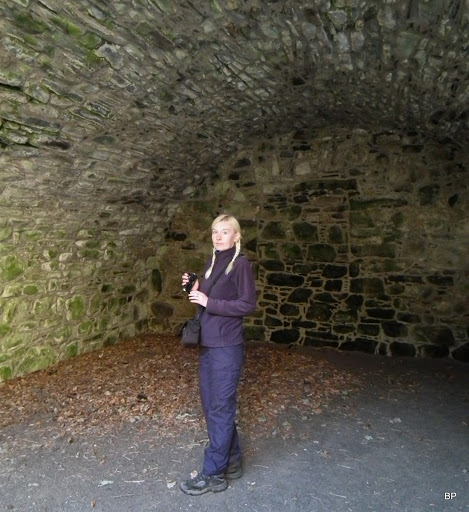 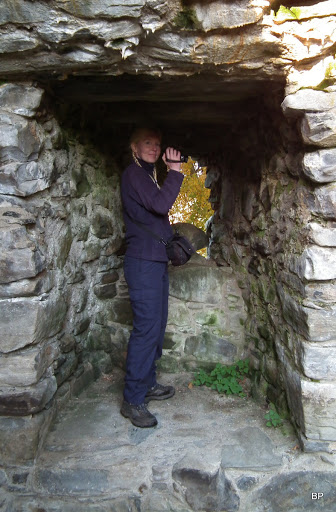 Now, to my second "bible", "The castles of Scotland" by Martin Coventry:
"Drumin Castle, a massive ruined 14th century keep, formerly of four storeys, was probably built by Alexander Stewart, the Wolf of Badenoch, or his son, another Alexander (or Andrew). It was later sold to the Gordons, but it may have returned to the Stewarts. The family were Jacobites, were forfeited after the Rising in 1745, and the property passed to the Gordons. Some consolidation work was carried out in 1997." 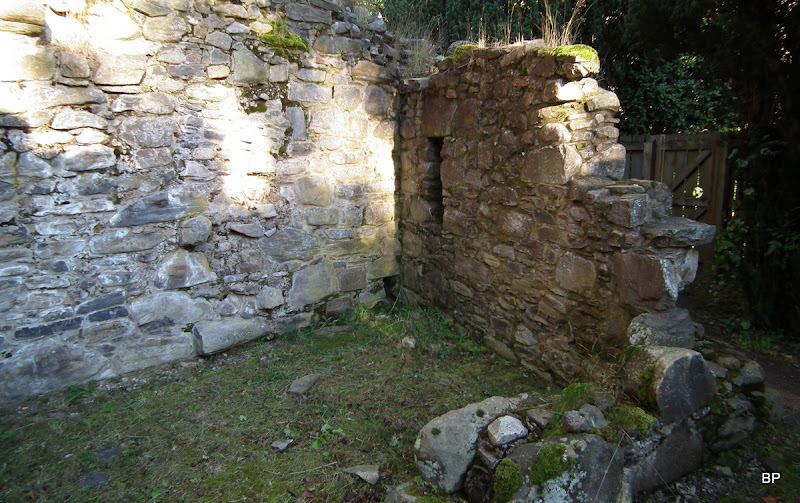 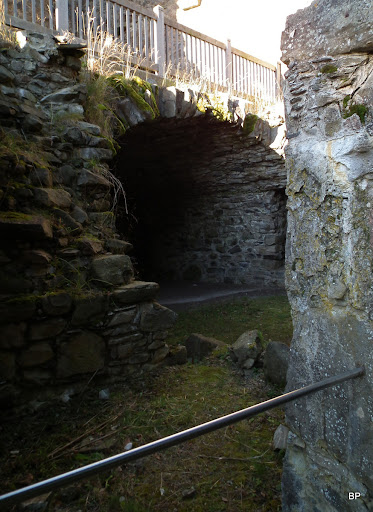 More about the castle's history here:
http://www.glenlivetestate.co.uk/drumin_castle.html
and here:
http://www.undiscoveredscotland.co.uk/ballindalloch/drumincastle/index.html
Having studied the vaulted ceiling on the ground level, we climbed the narrow staircase to the first floor: 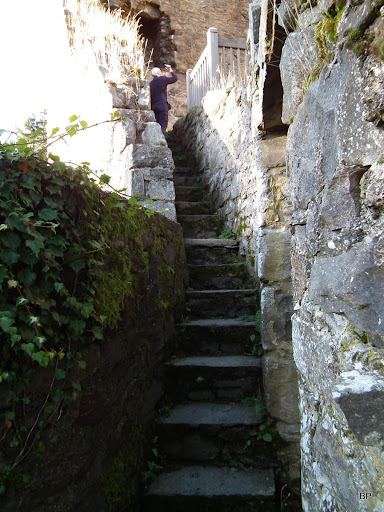 This level is secured with wooden barriers and with concrete floor so it is safe to walk around, even to jump and dance

The castle won't collapse under your feet! And just as well, as it is a grand building, the thick walls, the height... Just let the photos speak for me...
The barriers: 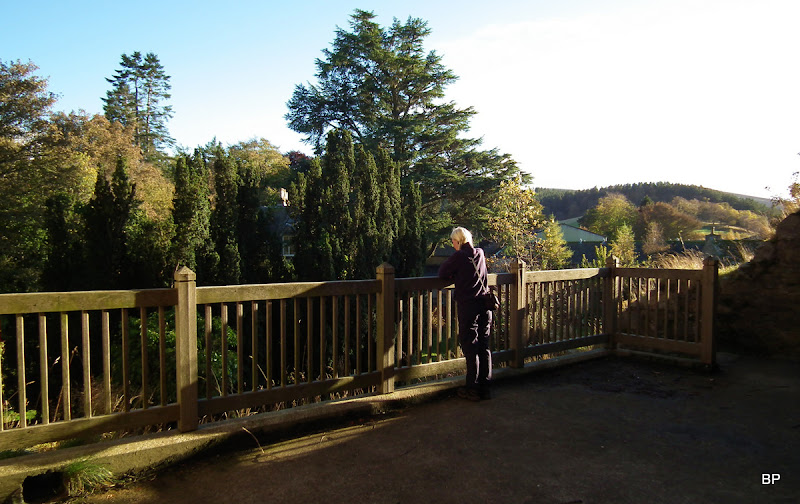 The upper walls from the first floor level: 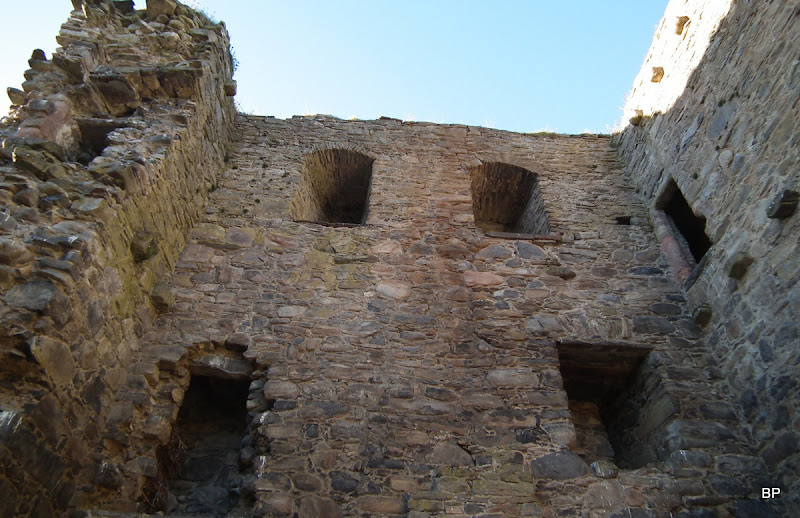 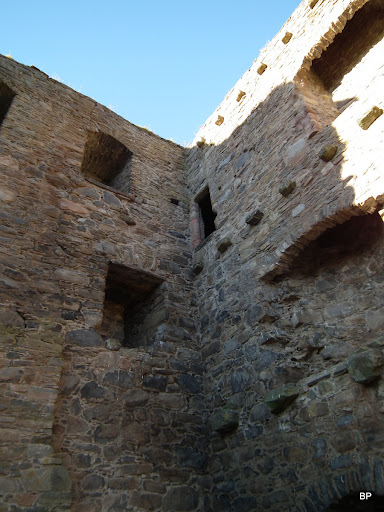 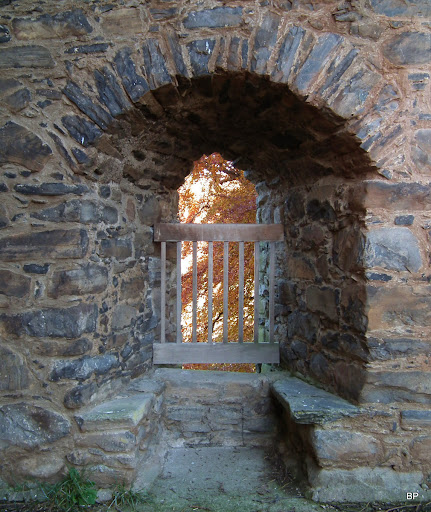 The third floor entrance to what I guess must have been the staircase within the thickness of the wall: 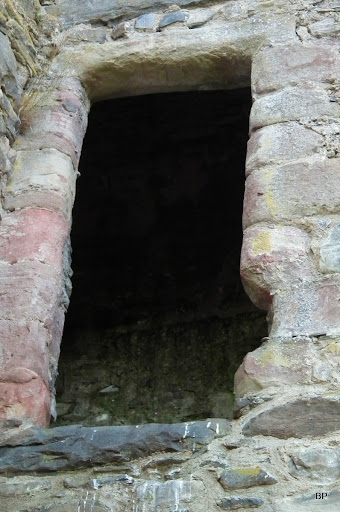 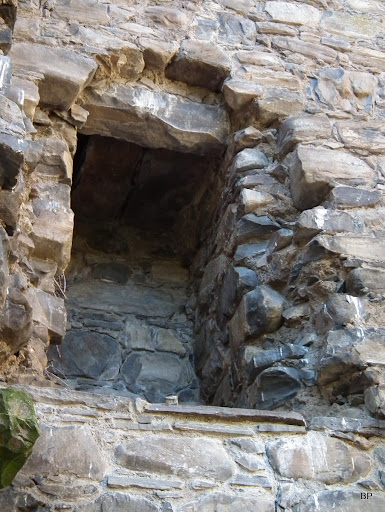 ...but I have to admit, the inhabitants of this tower had nice views to wake to! 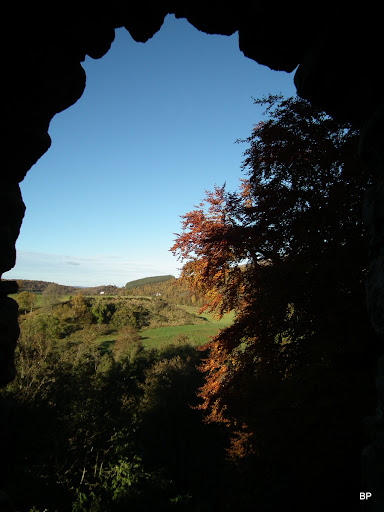 Drumin Castle is a great example of good preservation work - if you bear in mind thet it was abandoned in the early 1700s and the neighbouring farmhouse was built using the stone from the old tower, Drumin is still in good condition! And hopefully it will stand for much longer, the silent witness of the changing winds of Scottish history

I had known about this ruin for a while but haven't had the opportunity to have a look at it so far - and here it was, leaning towards me, fenced off, in a state of disrepair, abandoned, unwanted, unloved. A piece of history falling to bits in front of us...
I was aware that the ruin was closed for the public, having checked on the Crown Estate web page which says:
"This small castle was built by the Earl of Huntly in 1564. It is an impressive stronghold which is thought to have been built as a hunting lodge, but possibly with the purpose of controlling the main access to Gordon country from across the Ladder Hills. Unfortunately it is now in a dangerous condition and no access within the surrounding fence is possible." 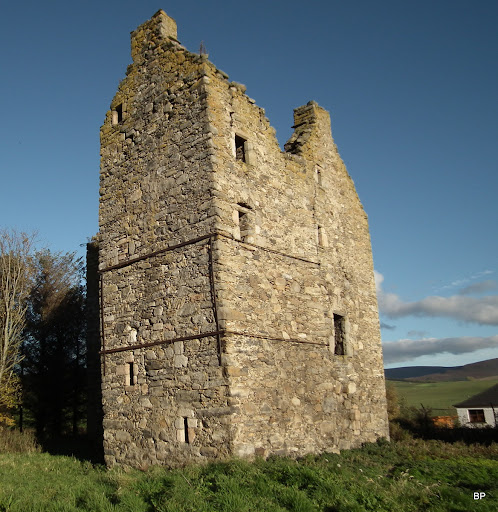 The castle stands near to the Glenlivet Distillery and close to modern houses - maybe that's the reason why nobody is interested in maybe renovating it as private residence - it wouldn't give the occupants the privacy of an old mansion. Another obvious reason, the building is so unstable that it would probably have to be dismantled and rebuilt stone by stone. 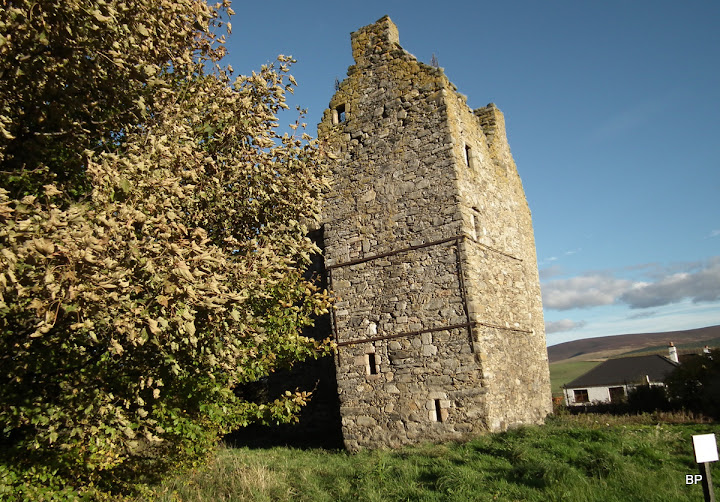 An information board placed near the ruin says that some consolidation work is planned for 2013, but even with this done the castle will not be open to the public - too dangerous... 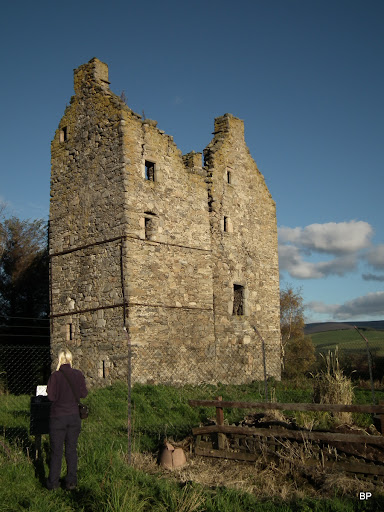 Even though it's not possible to venture inside, the cracks on the outer walls are well visible: 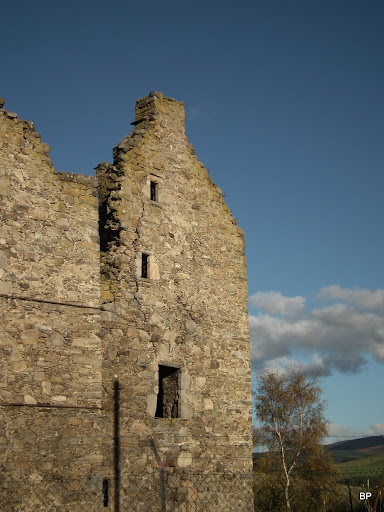 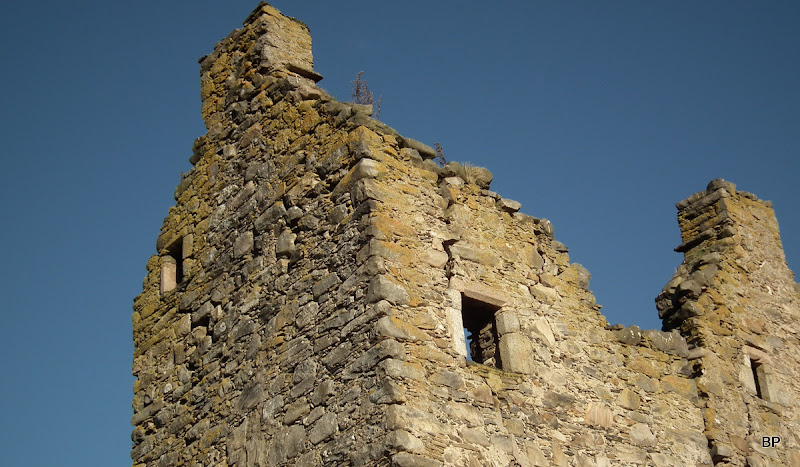 One wing of the ruin is supported with metal "braces", just to keep it standing: 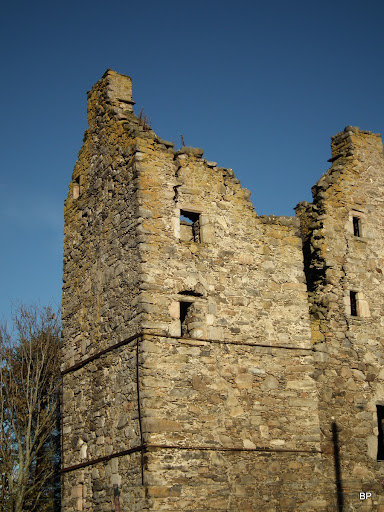 Hence my own exploration of Blairfindy was very limited, I'll let MacGibbon & Ross do their job and give us a more detailed insight into the building's structure and history...
"This castle, which was a hunting-seat of the Earls of Huntly, stands on high ground above the steep banks of the river Livet, and about seven miles southwards from the station of Ballindalloch. It is built on the L plan, with the wing slightly projected, so as to command the main building on two sides.
The other sides are defended with round turrets corbelled out on the angles. The entrance doorway is in the re-entering angle of the wing, and is defended from a squint hole in the wall. A passage leads to the kitchen, with its usual large fireplace, oven, and water drain, and to the cellar, which has the ordinary private stair from the hall in the thickness of the wall. The kitchen and cellar are vaulted."
Sadly, as I found out when searching the web for any info about Blairfindy, the internal celling has recently collapsed within the building, making the ruin even more unstable...
We can't peep inside the castle, but we can use our imagination... This plan should help:

"The principal staircase, which is wide, occupies the wing. It starts near the entrance doorway, and ascends to the first floor only, the access to the upper floors being by a newel staircase corbelled out in the re-entering angle of the wing. The hall as usual occupies the whole of the first floor.
The two upper floors are now inaccessible, but they no doubt contained the usual accommodation."
This drawing from MacGibbon & Ross (also reprinted in Coventry's book) portrays the NE side of the ruin: 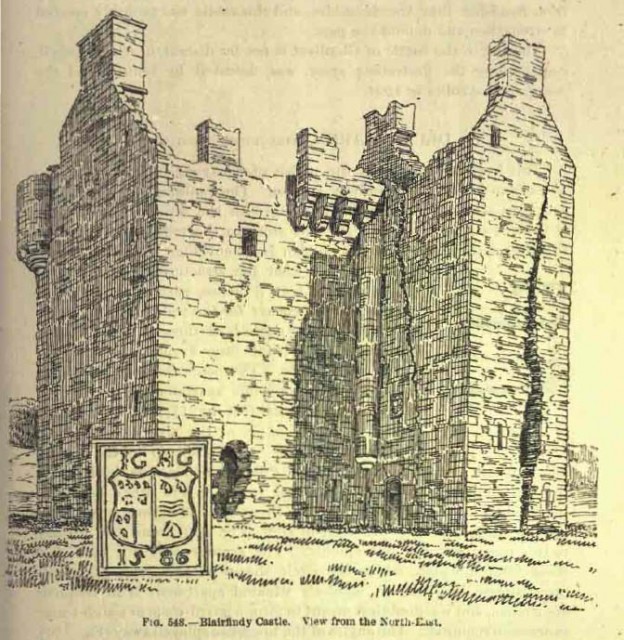 "The view shows the entrance doorway and the shield above it, on an enlarged scale, containing the Gordon initials and the date
1586. Above the entrance, near the roof, a remarkable feature is observable in the boldly corbelled and machicolated parapet or turret, which has evidently been erected in this situation for the defence of the doorway." 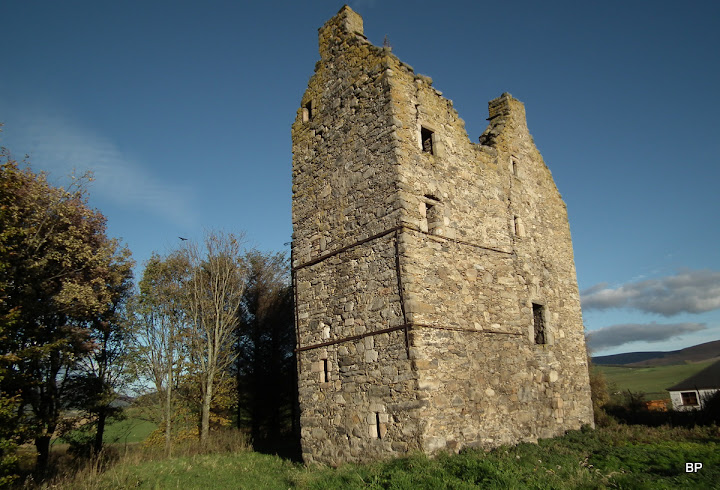 "Glenlivet occupies an important position among the passes leading from Banffshire into Aberdeenshire, and this castle was probably erected to strengthen and defend the pass. The site of the battle of Glenlivet is not far distant, in which Argyll, commanding the Protestant army, was defeated by Huntly and the insurgent Catholics in 1594."
What a shame this castle is in such a bad state - and especially compared to its well-preserved brother Drumin

A glimpse of hope for Blairfindy, maybe a tiny light in the long tunnel: The ruin has recently been added to Historic Scotland’s 'Scottish Castle’s Initiative' register to assist in any plans to restore from the current state. So maybe - MAYBE - there is somebody somewhere with a couple of spare million and a big heart... Come on... This lovely tower house has very little time left!
One more thing, I'm not a member of Facebook but I know there is actually an account there called Save Blairfindy Castle, here: http://www.facebook.com/pages/Save-Blairfindy-Castle/132647936819437 with more info and photos of the ruin.
I keep my fingers crossed for Blairfindy...

Is there anybody out there to save me?... Please, please.... 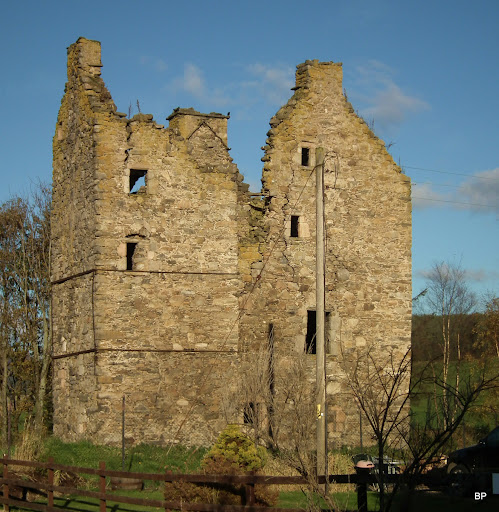 Re: The tale of two towers

Very interesting report BP with some great photographs:) , I think the NE gable wall of Blairfindly requires another steel band at high level before the chimney section collapses

. Many thank's for the tour, I must make a visit sometime