Second attempt at writing this report - I had almost finished it this morning then my internet crashed and I lost everything, grrrrr.
Try again! And remember to SAVE as you go, silly girl.

May 2012, and we were in Braemar for a week. I had climbed Schiehallion on Sunday with my brother, then Craigendarroch on Tuesday, as well as a very quick walk/run up Creag Choinnich, and a walk through the Morrone woods.

Wednesday came and I fancied something higher again, so I picked this one because it looked like there were some good views and it was quite close to base.

We drove to the Linn O' Quoich car park and I left my boyfriend-with-dodgy-knees with a picnic by the river and I set off along the track. He doesn't mind; he does not get the mountain bug at all!

Starting off along the track: 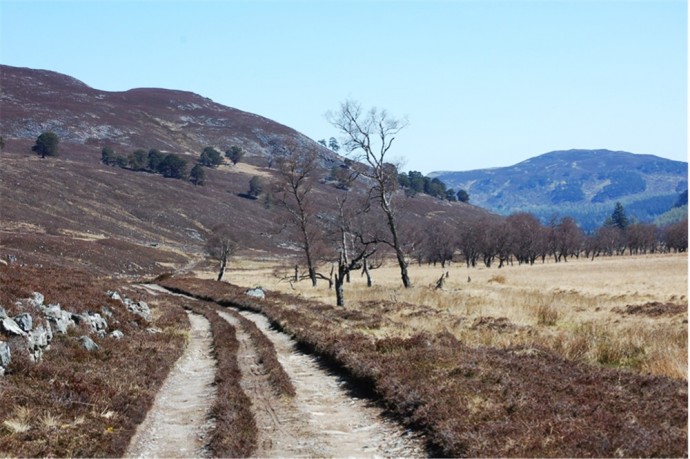 I soon spotted the faint track heading off up the hill on the left, and took it. As I gained height I came to the trees. 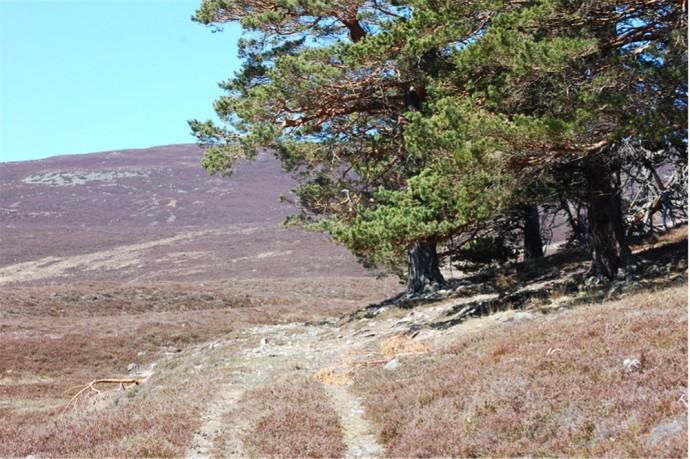 I had a wee break and a snack and carried on. It was a very hot day and I was wearing far too many clothes!! The views became rather lovely and I started to feel a bit weary. I'm from Orkney and not used to the sun... 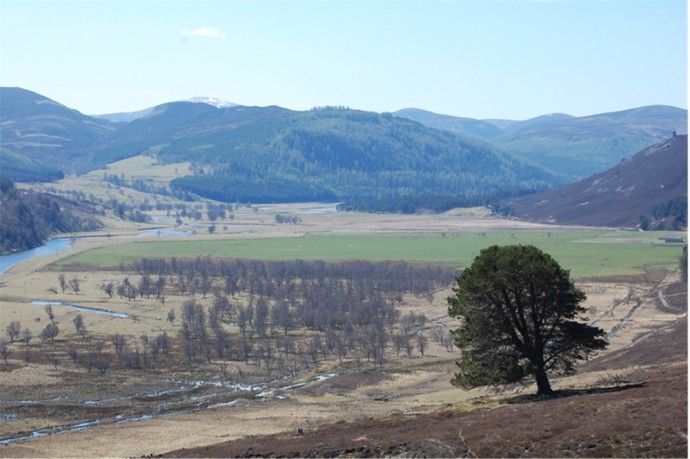 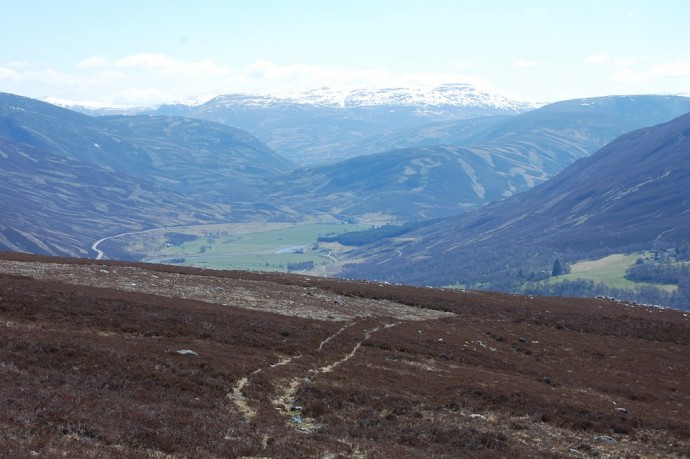 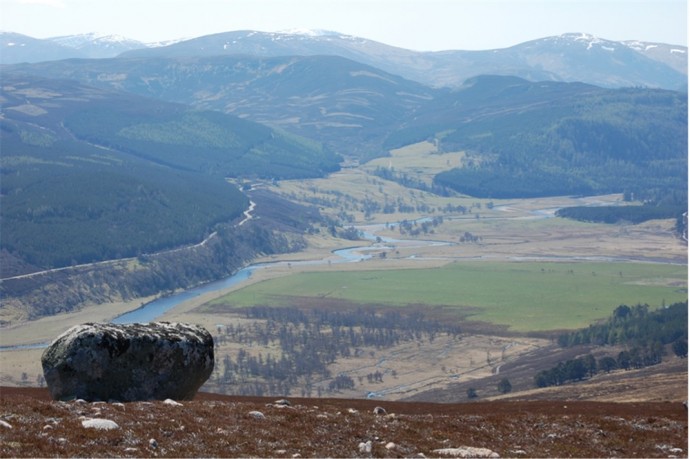 I headed up Creag a' Chleirich first, and encountered a young Czech man who sensibly was wearing only shorts and boots.
I, in contrast, was wearing hiking trousers, wool socks, gaiters, a T shirt, a shirt, a Joules gilet, a North face jacket and a headband. Thank heaven I remembered my sunglasses!!

We talked, as you do when you are the only two people on a huge hill.
"Scotland is all brown!" he said, a little disappointed. I looked around and had to agree.
He bounded off, to climb Lochnagar the next day.

The gorge Clais nan Cat wasn't very scary. You could walk in and out the other side if you wanted. 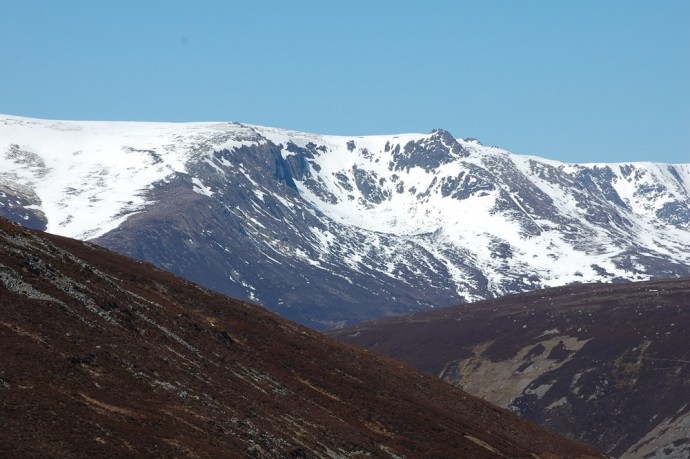 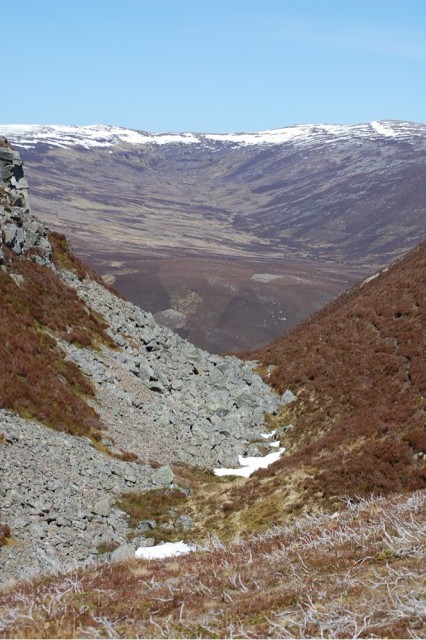 Braemar from above - I have sat in our little self catering apartment and looked up at this mountain many times, and now I was up there looking down! It looks so much further from above! 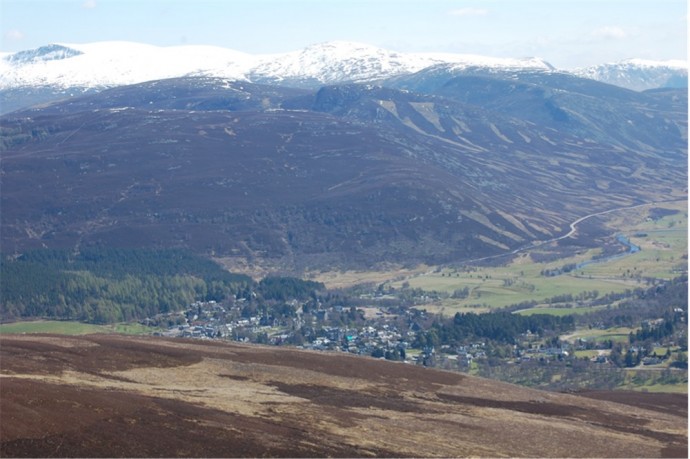 The snowy peaks were pretty, and quite a lot of snow considering it was May and rather warm. 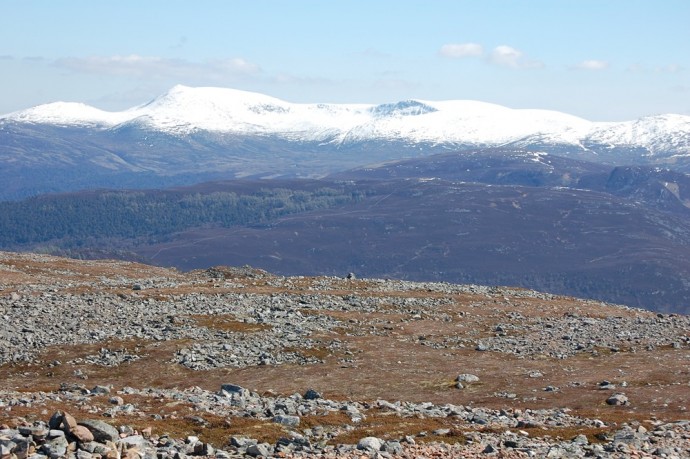 The walk up to the summit of Carn nan Drochaide was very, very tedious. Mr Czech, I reckon, was much more used to hot weather and better dressed for the occasion. He was out of sight pretty quick and I was feeling like I was going to die of heatstroke, but I was not going to give up so I trekked through the knee deep heather in the direction of the summit, which was out of sight in the shimmering sky.

I stopped about two thirds up and ate most of my food. I took aspirins for my headache and trundled on. Gradually the heather gave way to a rocky plateau. I had read of the many cairns and was wondering which one was the summit, but in the end it was pretty obvious.

It's huge. And at the top, which does give the game away.

I phoned Mum, reassured her I was alive and would be ok as it was all downhill on the way back. Then I ate the rest of my food and drank half the remaining water. 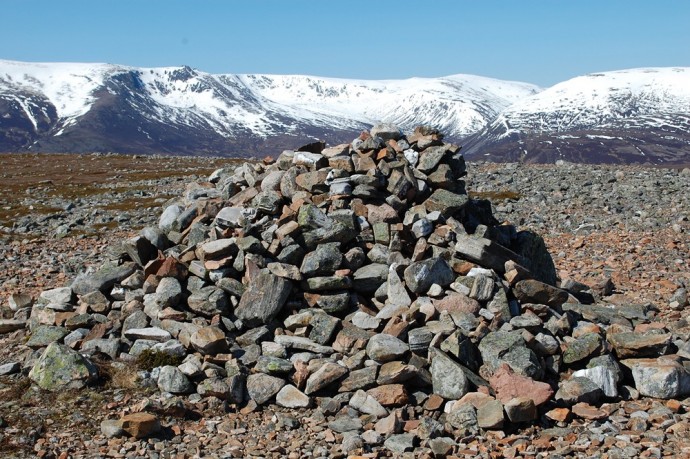 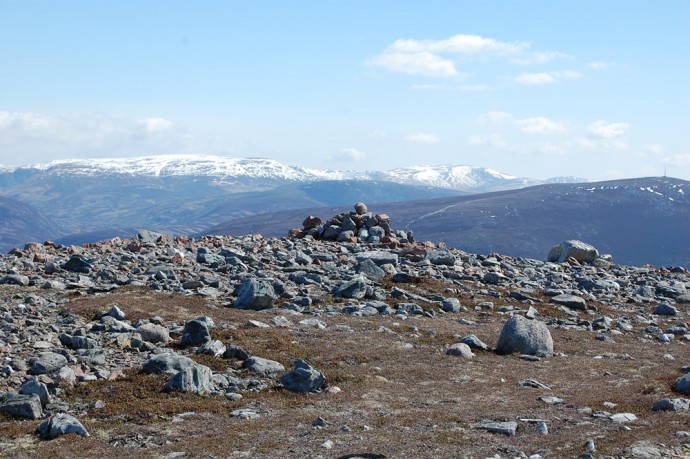 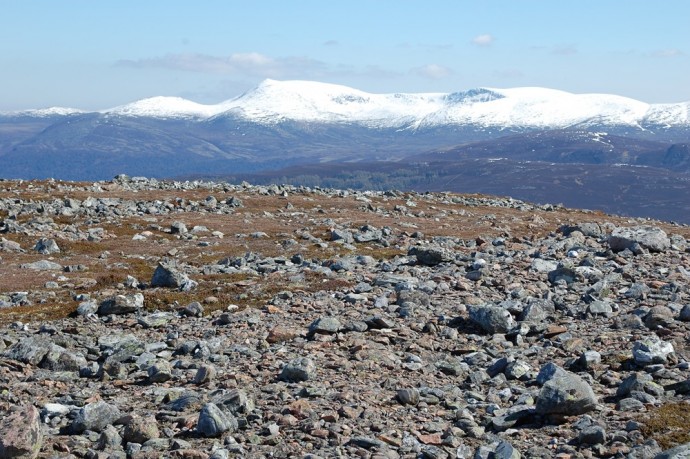 I sat there for a while, savouring the fabulous views, and set off back down. It took no time at all to get back, just one and a half hours. 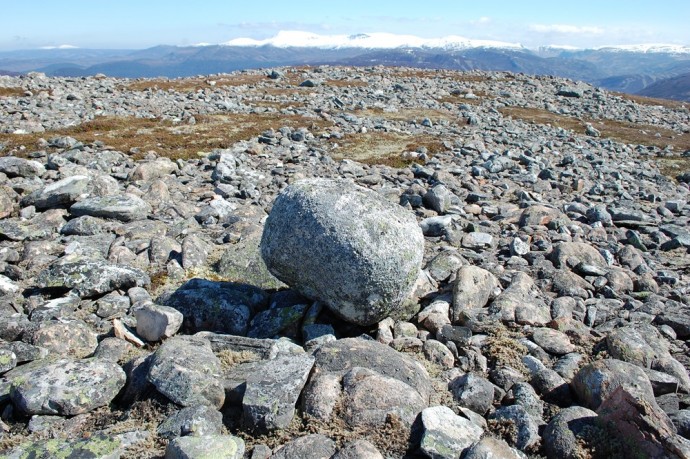 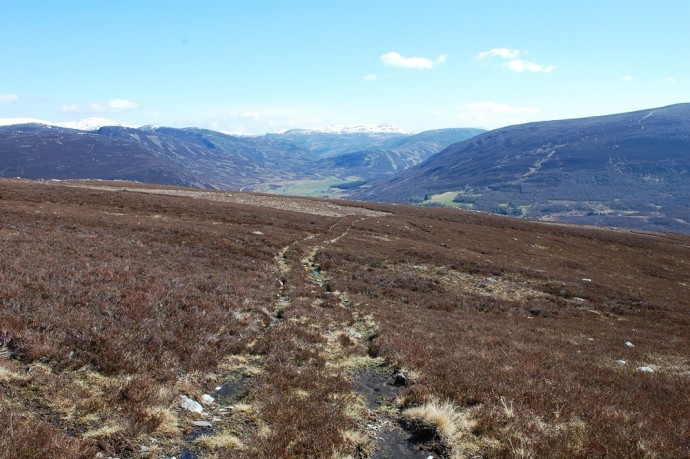 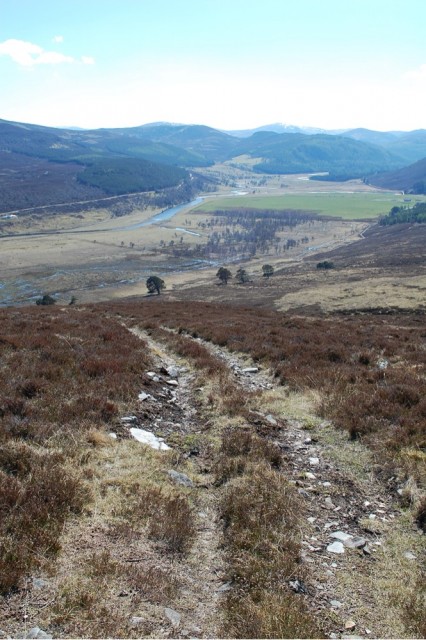 Graham had walked along the track to meet me, and so we walked the last half a mile back together and I went and stuck my legs in the freezing river! It was HEAVENLY! 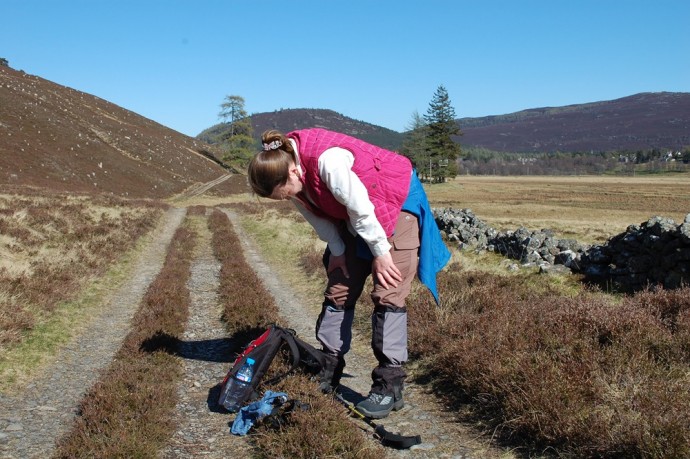 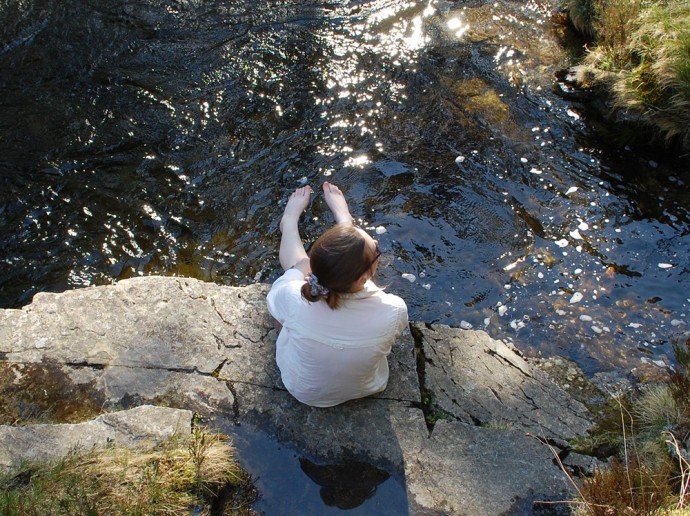 I think that the Linn O' Quoich is one of the loveliest places I've ever seen. Beautiful!
But that was one of the hardest walks I've done, because of the heat. I wish it had been frosty and crisp instead! Glad I did it however, as it is certainly one I won't forget. 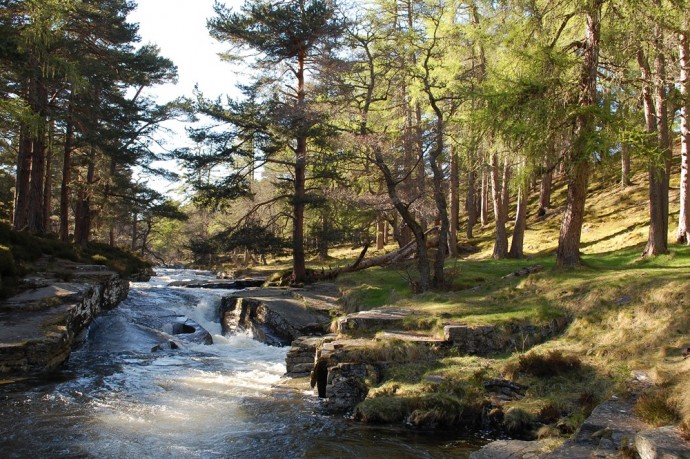 That is certainly a great way to finish a walk !

Thanks MusicalHiker for posting, I have not done this one yet. Nice way to cool off, must take the swim trunks!

This was one of my toughest and least enjoyable hill walks too, also on a hot, muggy May day a few years ago. Nice views from up top though.