Woke up this morning with no intention of going hill walking (came down the stairs for breakie dressed to go jogging!!) but it was such a lovely morning decided a hill walk was the order of the day. Quick look on here (walkhighlands) and decided on Ben Donich at around 09:20am, as its less than an hour away from me, and by 10:30am i was parking up at The Rest and Be Thankful. My wee Beagle, Eva, has just turned 1 so decided she was coming along too...this would be her biggest hill yet. I was slightly concerned about the wee scramble and if she would manage but decided to give it a go. Off we went up the path and before long we had good views looking back down and along the road we had came and also over to the Cobbler, Ben Ime etc. So far so good weather wise. Some of the flatter sections were quite boggy but not as bad as expected given the amount of rain we've had recently. I had kept Eva on the lead as I could see plenty of sheep on the hill further up. She was doing a good job of pulling me up anyway : ) As we got further up it got quite windy and the temperature fair dropped. It was a chilly wind and with the wind came the clouds : ( We still had some good views and I could even name a good few of the surrounding hills and Lochs. Enjoying hill walking more and more with each climb. Although I didn't spend a lot of time reading the reviews on here, I read enough to know we should be reaching the scramble some time soon. My plan was to let Eva off the lead for this part, for both our safety. We soon reached it and off came the lead...and off darted Eva...in the opposite direction!!! I managed to coax her back with a treat and after a few shaky false starts I managed to get her down. Back on the lead and off we continued. It was still getting windier and colder but we didn't have far to go now and soon enough the trig point came into view. We passed a couple of fellow walkers just before the top on their way back down. No hanging about at the top for them or us. Took a few photos but not the best of views. I usually stop for a bite to eat and a coffee at the top of hills but not today. My fingers were going numb just taking photos! 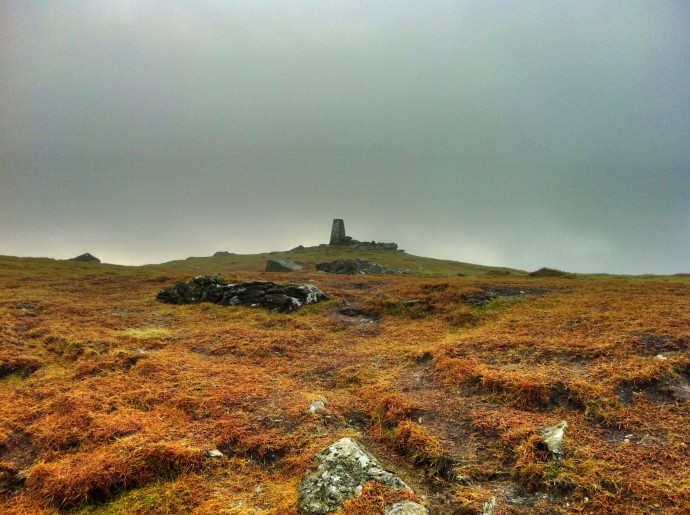 Looking down Loch Goil / Loch Long from the summit during a very brief gap in the clouds.

I had remembered to pack a tripod so hurriedly tried a selfie of me & Eva at the top. As i said we didn't hang around for long and headed straight back down. The scramble on the descent was much easier going up than coming down and Eva went up it no problems. Eva itching to get going up the rocks!!!

It was quite slippy going down in parts and also it got quite busy. Half ten is very late in the day for me to start a climb, but I passed loads of people going up while we were on our way down. The weather wasn't getting any better either. We were back at the car just under 3 hours after setting off, and I decided to have my lunch at the car before setting off home...we drove along to the rest and be thankful car park to take in the views there from the car. All in all a great day. With the rocky sections and the scramble bit it felt like a right proper hill walk and I'm chuffed for my wee Beagle Eva who done great. : ) What photogenic dogs beagles are. Eva's a wee beauty.

Great report and I do love a good dog pic. Great mono shot at the end of the report

Enjoyed the report and glad to hear a fellow beagle owners viewpoint as we are worried about sheep and what to do in difficult scrambles.

Enjoyed the report and glad to hear a fellow beagle owners viewpoint as we are worried about sheep and what to do in difficult scrambles.

Hi carlynwilts, yeah we had a great day, thanks. That was Eva's biggest hill yet. She has only just turned one, so I haven't taken her on every walk I've reported on here, but she'll be coming on a lot more now she's bigger. I rarely let her off the lead as there is usually sheep about (alive & dead!) on the hills and I don't need to tell you the risks involved in that! I've been looking into getting her a harness and using a Canicross type set up for taking her hill walking, with her on a bungee cord attached to a waist belt on me, that way I can be hands free and also more in control of her pulling. I've got my eye on a Ruff Wear harness that is designed for lifting the dog also, is got a handle on it...ideal for going over stiles, fences, scrambles etc. Maybe treat her for xmas : )

Thats a great wee hill and like yourself, I'll need to return on a clear day

Well done on Evas first corbett, I wish we had started hill walking a few years ago when my dog was younger. Lovely set of photos, nothing beats a good walk and I am glad I am not the only one who likes to photograph my dog with the scenery

Great report and I love your dog!

Great report, great pics and a great hill! I however never got a view... ! Clag fest for me! Great looking beagle!