Having completed the Speyside Way over a decade ago with the omission of the Tomintoul Spur I thought now was as good a time as ever!
It was a very cold morning on leaving the house with a temperature of minus 5 displayed in the car, the road from Grantown to Tomintoul on an icy morning testing my nerve. Stopped to get an early morning photo of course. I arrived at the Glenavon Hotel before 0800hrs as I had a Grantown taxi booked for then to take me to the start point of Ballindalloch Station. Car satnavs become redundant on these roads, much to the taxi drivers dispair! We eventually got there after half an hour and a few calls to base. Straight fare of £30. My car was left at the hotel I was staying that night.
So here I was at a very cold Ballindalloch Station, but the coldness indicated the start of a very clear day! 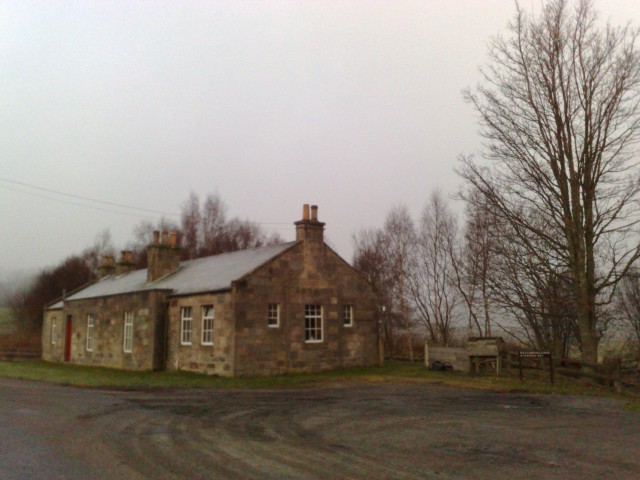 Started walking at a rate of knots to get some feeling in my face and hands, running at times along the B9137 following the River Avon. Here if the Bridge of Avon about a mile and a half along. 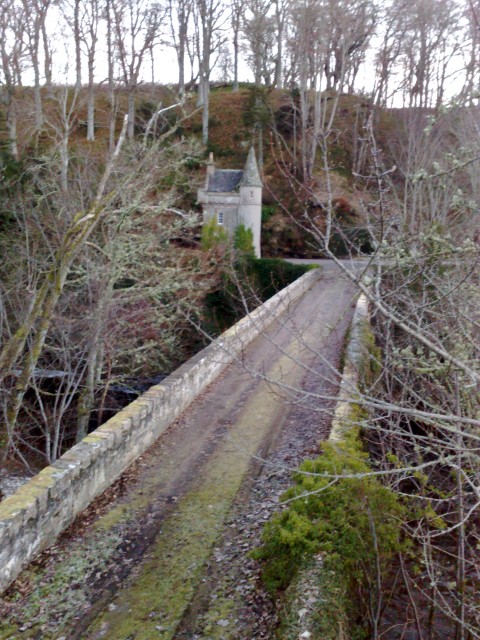 There was a thick bank of mist in the area of Ballindalloch shown here. 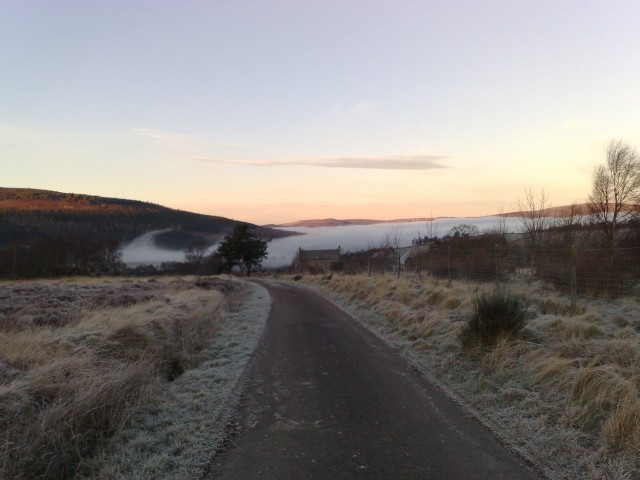 On my initial ascent round Cairnacay I saw a couple of signs. One advertising unsellable motors and the other asking me not to use the car park for number 2's. 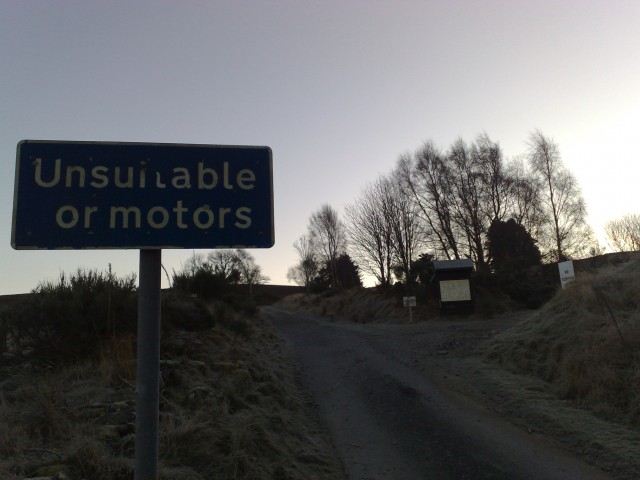 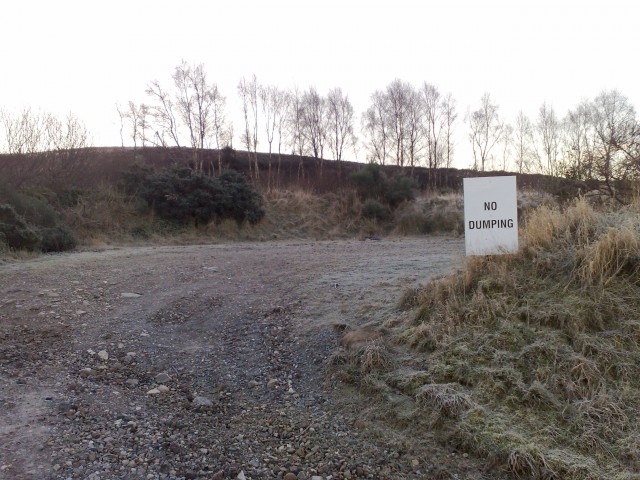 The following four miles were to provide me with excellent views over the southern Cairngorms and Moray, although the path was a bit rough in places due to mud and ice. 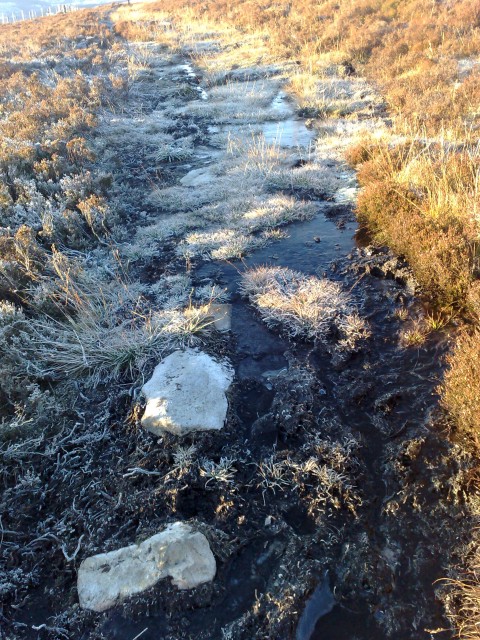 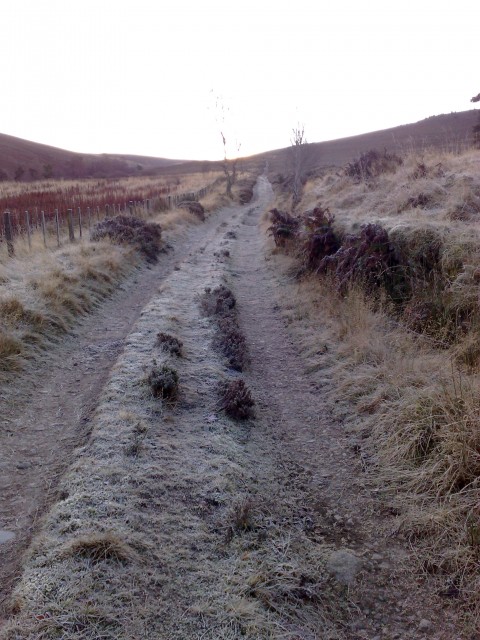 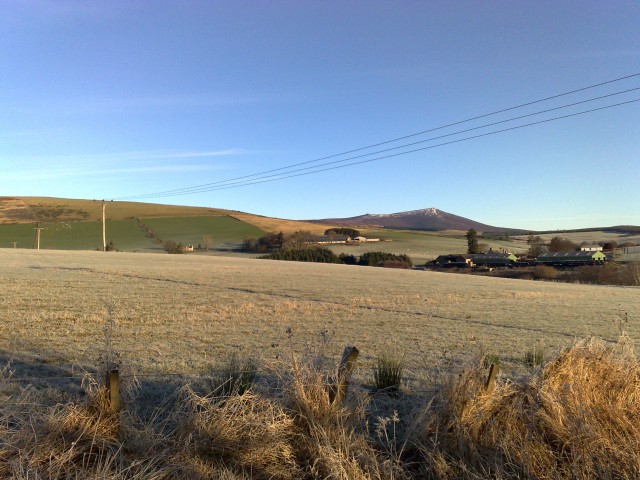 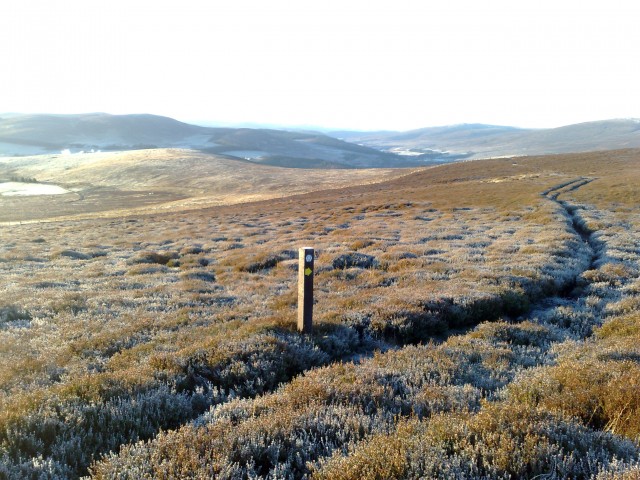 Once over this sty I could see the 8 mile mark of Glenlivet Distillery! 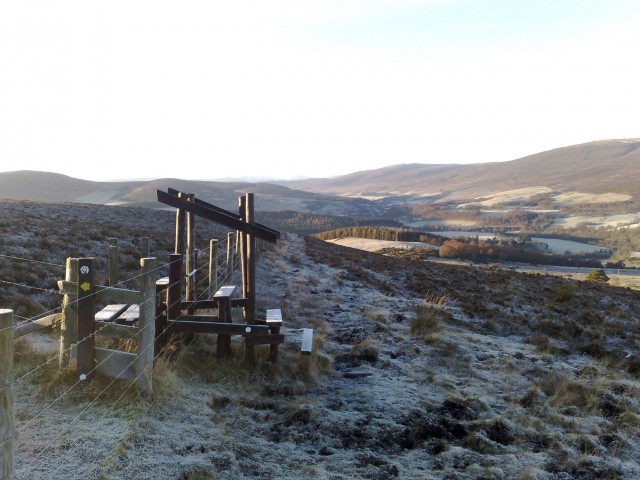 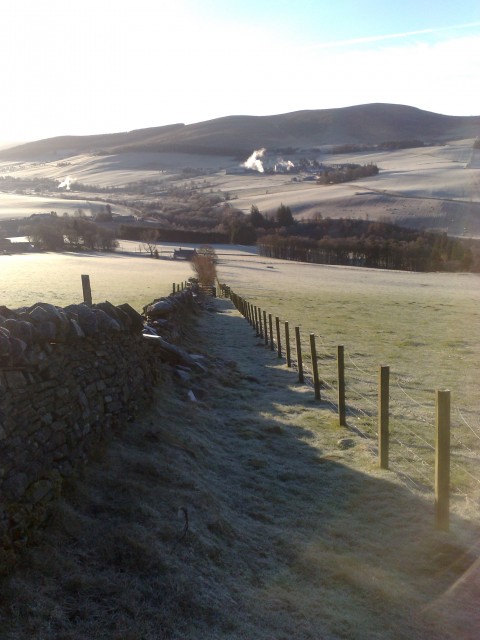 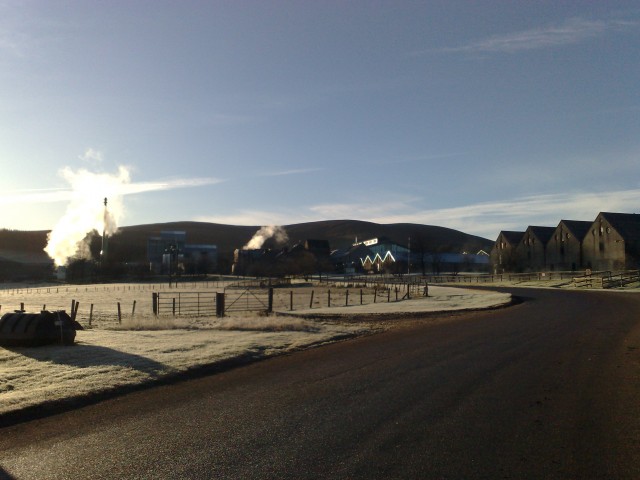 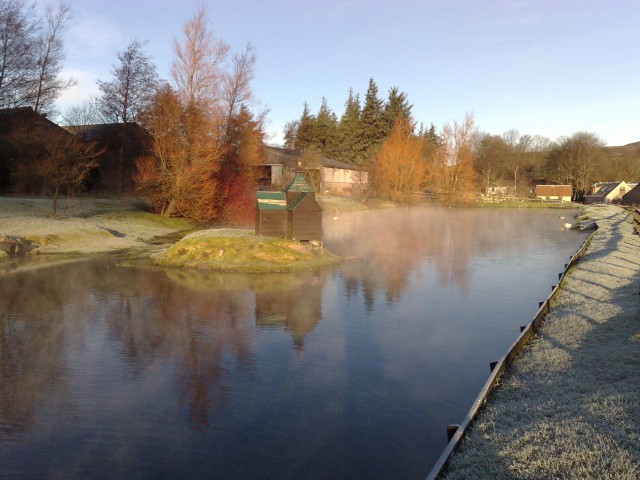 Past the distillery ands onwards over a couple of hills Carn Liath and Carn Daimh. 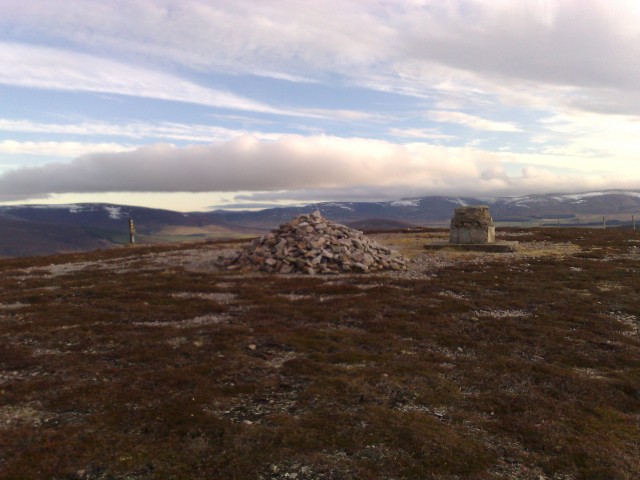 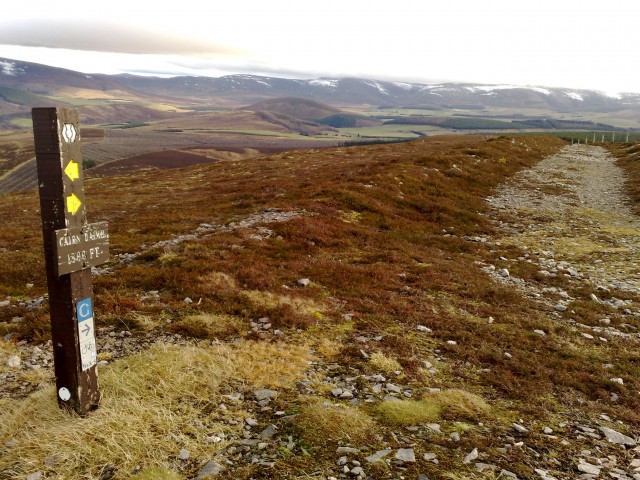 Then it was a very user friendly path through woods, not! 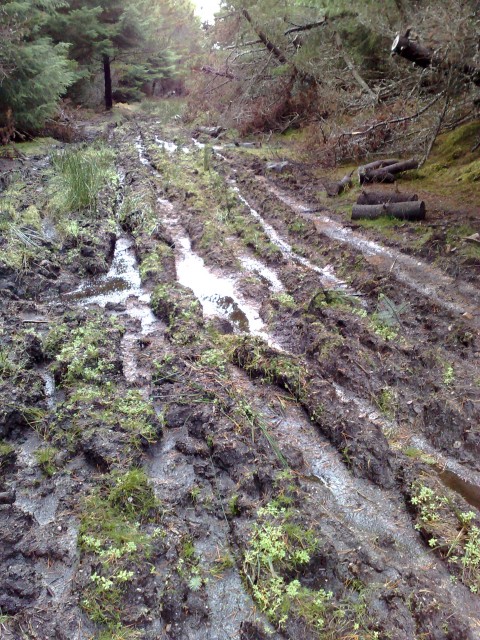 Coming out of the woods it was only three miles to push following a heathery trail. 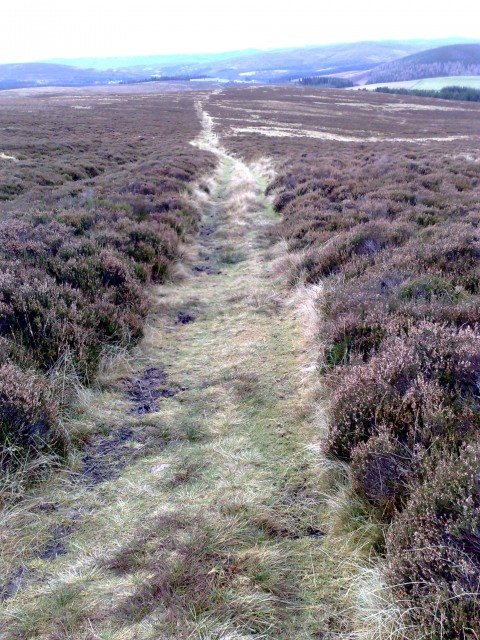 The sign for Tomintoul was very welcome by the end of this slog and I could smell lager! Happy days! 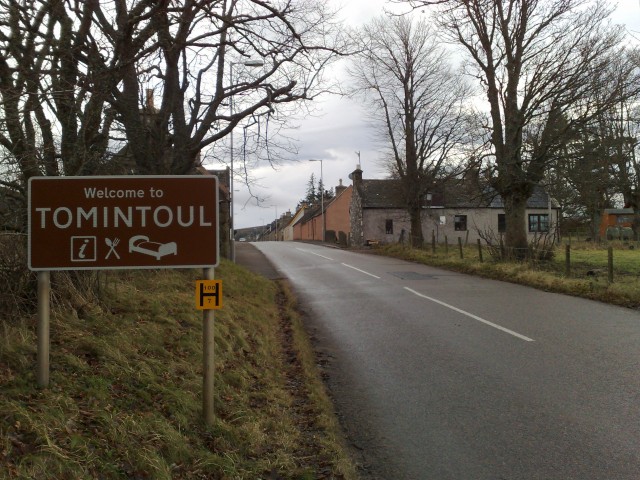 As mentioned I stayed at the Glenavon Hotel in the square at Tomtinoul. £29.50 a night with a great bar, sky through all the comfortable rooms and a cracking breakfast! Highly recommended. 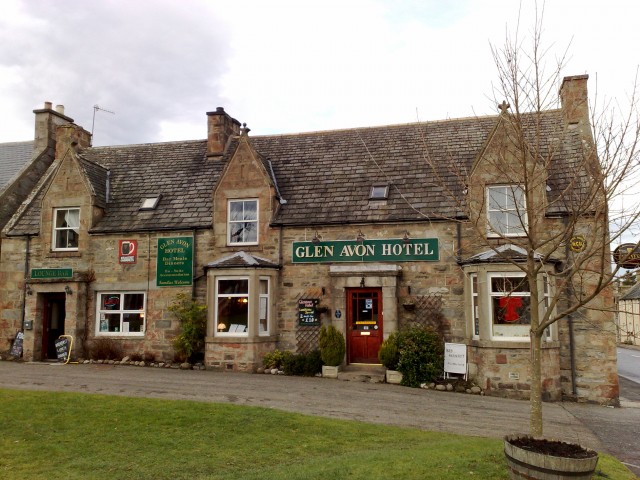 Like yourself, I done the Speyside Way a couple of years ago and have always fancied doing doing the spur.

The Speyside Way is a great walk, and it is good for reference to see what the spur involves. Cheers.

hello,
A good organised way to get around the problem of the car at the wrong end!.....seem to remember reading of this method being employed by others on the site recently. The hills after the distillery are bonny and I also remember not seeing a sole during the trip. Wasn't the original plan (30+years ago) to continue the route towards the Cairngorms...Lairig G. and Glen Tilt. But I think that there were too many problems to overcome....maybe taking walkers into, for some, unsuitable terrain? Accommdation for non campers would have been a big problem....and the Geldie crossing without a bridge!

I did the walk whilst in the army for charity. Really enjoyed it then, maybe because we dropped into nearly every distillery for publicity!

Tomintoul itself is a rewarding little town to finish in with a good whisky shop and friendly hotel.

I never saw a soul until a mile from Tomintoul pal, a December Tuesday afternoon. You are right about the hills after the distillery, beautiful!

I did the walk whilst in the army for charity. Really enjoyed it then, maybe because we dropped into nearly every distillery for publicity!

Raising money for your own kit like nowadays? :-S

Looks some challenging path conditions on that walk - still haven't figured out where Ballindalloch is yet so will have to hunt on my Scotland map. Know where Tomintoul is tho as I want to walk in that way to do the Northern side of Ben Avon sometime (well part cycle, part walk - looks a long way!)

Ballindalloch is just a few buildings MC. Its that insignificant the taxi driver couldn't find it and I had to guide him using my map. You will really enjoy doing this route! I can guarantee that!

Planning this tomorrow, but starting in Tomintoul (if I can work out the start point lol) I'll bookmark your great report in my phone so I can refer to it even where I don't get a signal x