This day trip was for 4 of us taking in the Strathfarrar 4, W to E, with a car at each end.

Great day out, started clear with snow on the tops meaning slips and slides all round (except for Scoob who never falls - touch wood!). We made good time and were in sight of the end car before sunset

Walking along at a good pace going down the last of the land rover track, I didn't give any thought to slowing for the wet wooden planks at one point in the track (they were flush with the rest of the track)... too late! Feet went from under me in a 2-footed slide as I crashed down onto my bum

but this time I managed to land more on to one side.

I couldn't put any weight on to my right arm and needed to be lifted back to my feet so I could finish the walk out.

I've since had surgery... on the fracture scale 1-8 with 1 being simplest, clean break, mine is an 8

After such a daft wee slip when I was really off the hill, I've ended up with a metal plate inside my wrist holding together the pieces of bones

signed off work for 2 weeks

knocked them down from 4 weeks; I've only been off twice before in 15 years and proud of my record) can't drive

and told this will take at least 8 weeks to heal

Scoob's fabby video report stopped short of catching my fall - the walk was already done after all! 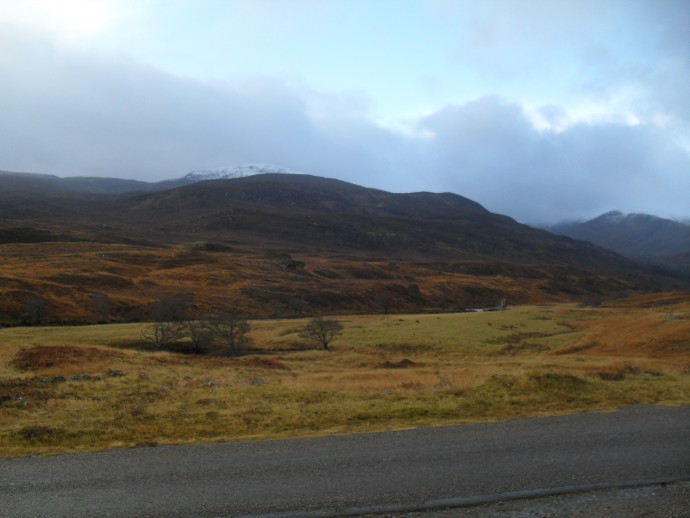 permission from MCOS lets you drive right along the Glen - there were deer everywhere! 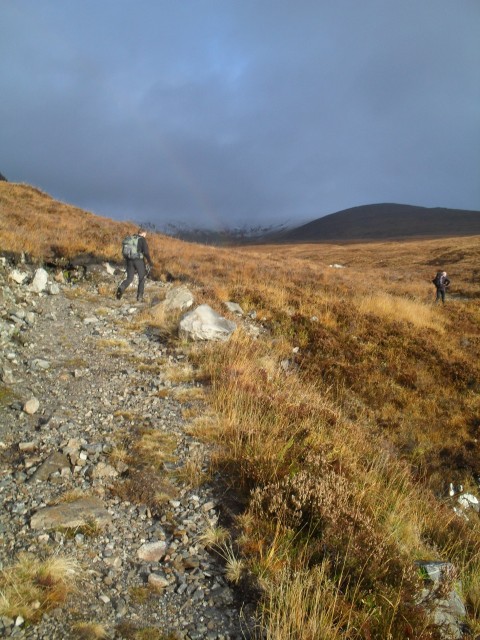 Going west to east means starting on a good track 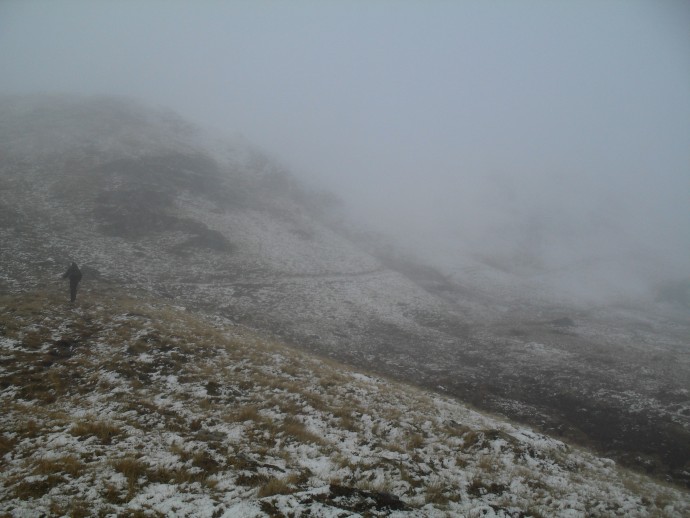 reaching the snow line and the clag comes in 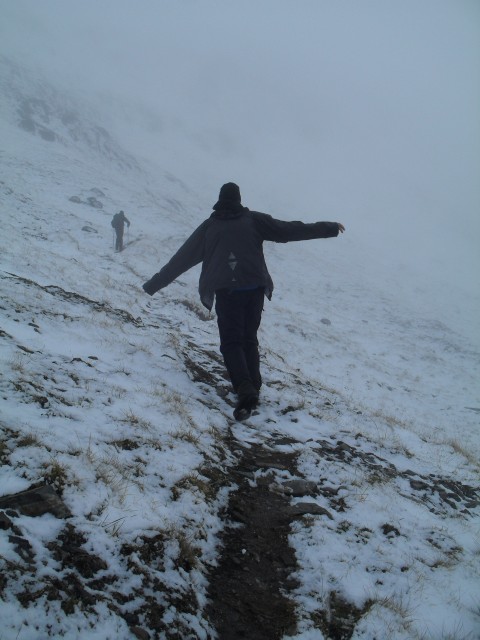 hmm, bit slippy along this bit but ice axes all left back in the car :0 (Scoob taking the mick of my flapping arms lol) 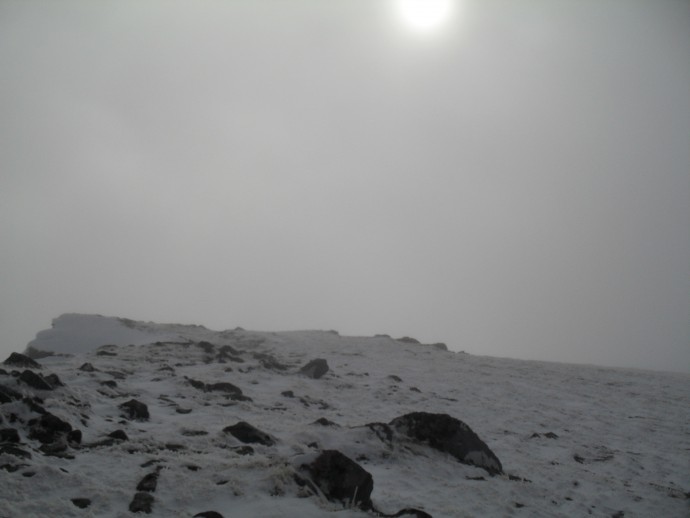 sun almost out at first top 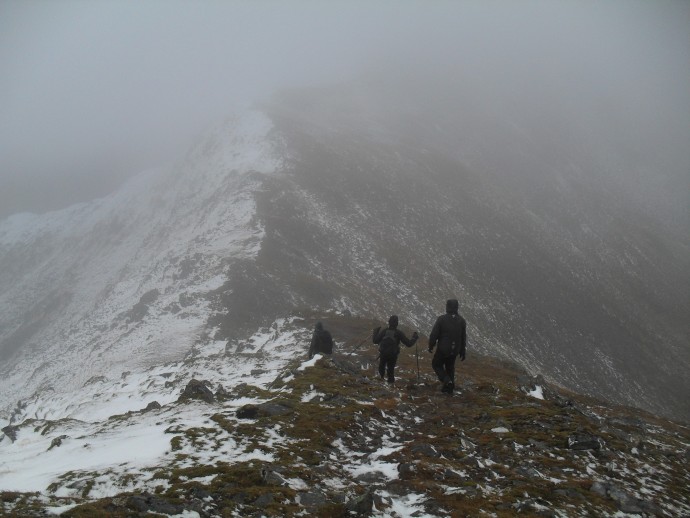 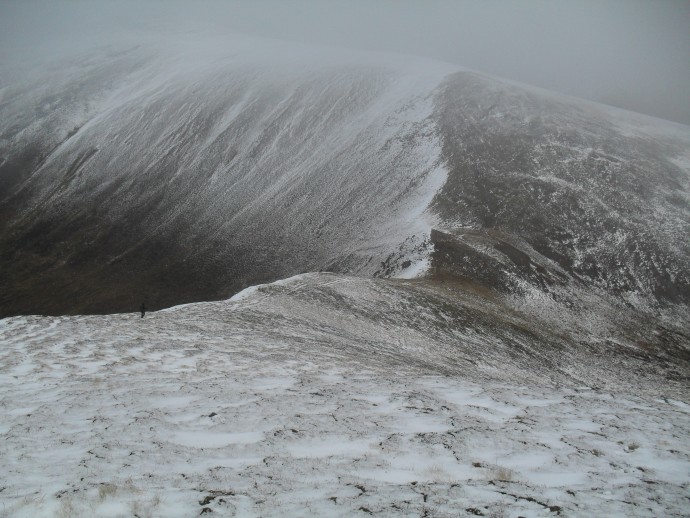 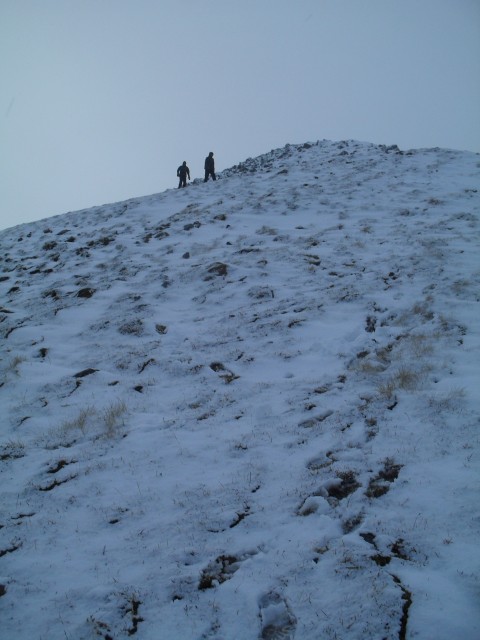 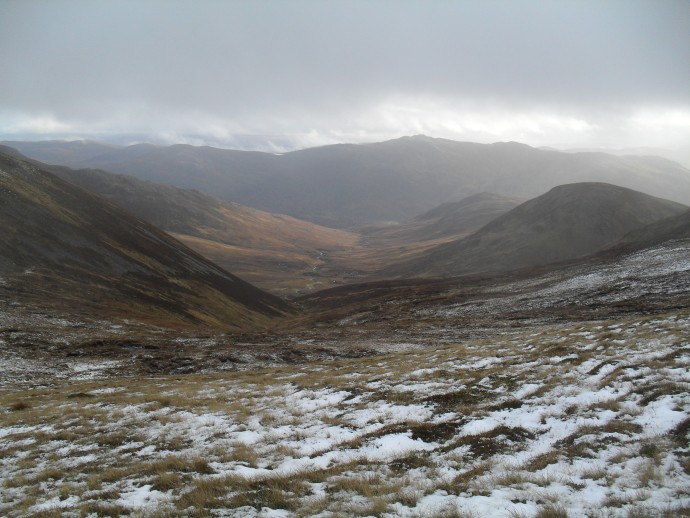 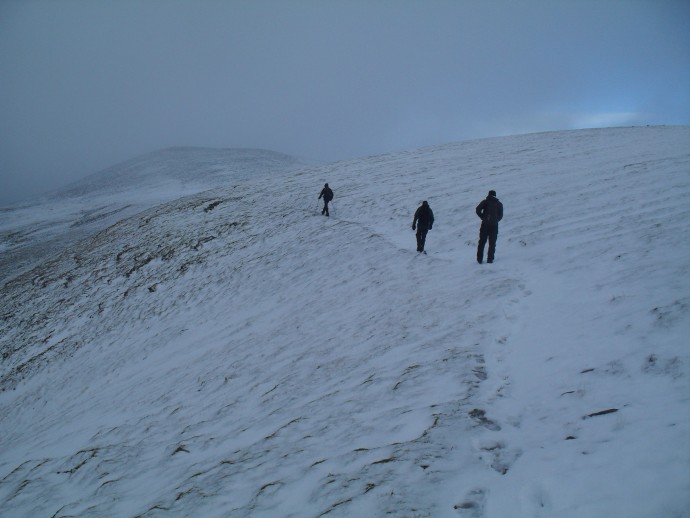 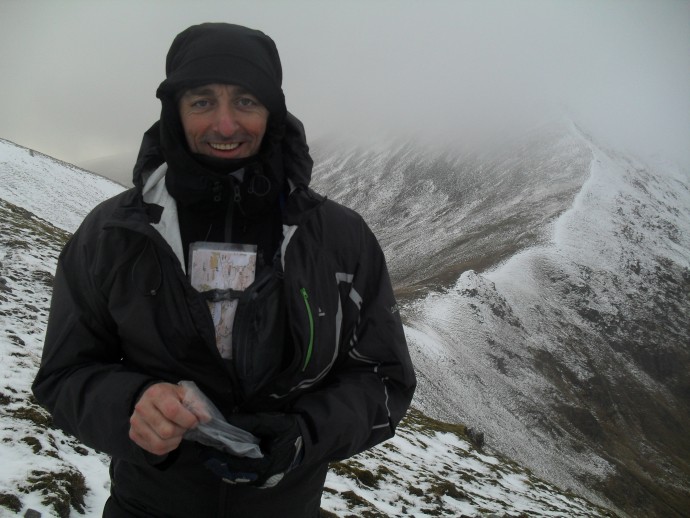 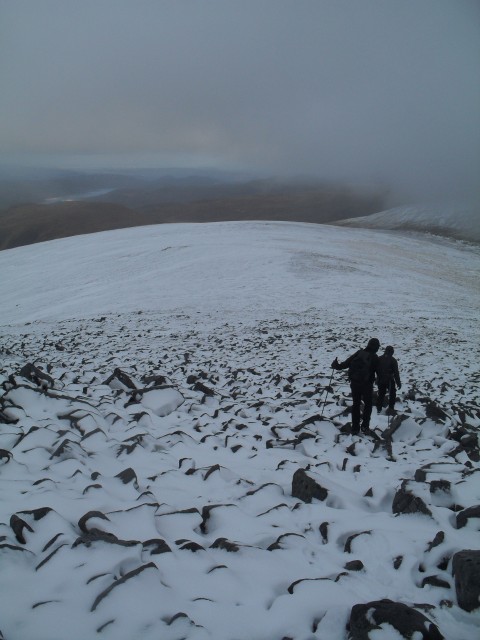 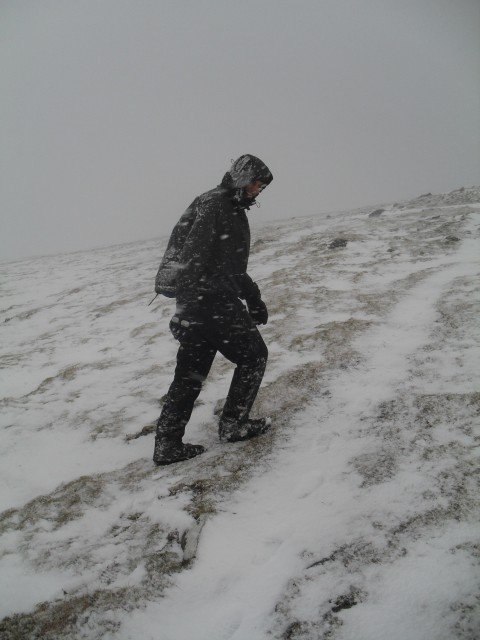 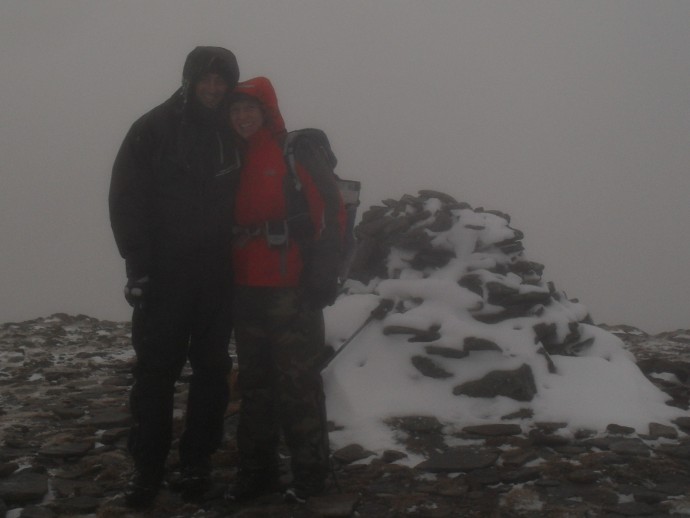 last summit of the day :) 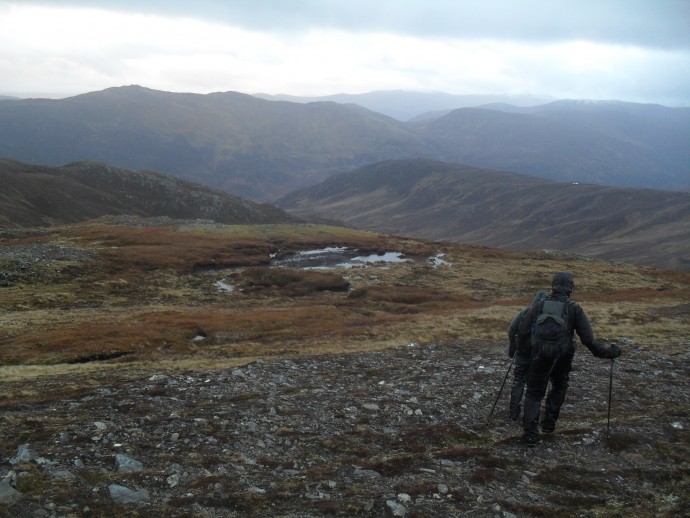 boggy walk out until we picked up the good, solid land rover track for the final stretch...

T'was a smashing day, in more ways than one !

Excellent day out, apart from the end

luckily or not i had a first aid kit with me

i even managed to put on the sling.....badly, but it worked...no sure if you were ready for the mouth to mouth? well i cant remember when your supposed to do that

wishing you a speedy recovery
Alice

.Your Munro count has no half raced up as well,hope you're back on the hills soon

I do hope it heals up well and quickly. with you being outside such a lot I'm sure you will be a fast mender. Thank goodness it wasn't your ankle.

Sorry to hear that Fiona wish you a speedy recovery.

You should have taken those 4 weeks, Fi: 2 to recover and 2 weeks to do lots of 'therapeutic' hill walking!

Empathy and every sympathy Fi - I also slipped badly on these hills - high wind and sheer ice drove us off the hills half way round and it took us two visits to complete these.

you slipped on planks....

scoob999 wrote:... well i cant remember when your supposed to do that

Will try not to need a carer for too long

pigeon wrote:...Your Munro count has no half raced up as well

Thanks Pigeon. Yes, still obsessed with getting out every week, which makes any recovery/down time even tougher... keeping an eye out for any gentle walks I can easily do one-handed

Thanks Mrs Santa, exactly - it could have been worse!

Thanks Quoman. Gutted we missed the walk with you and Geo, etc... next time!

Lenore wrote:You should have taken those 4 weeks, Fi: 2 to recover and 2 weeks to do lots of 'therapeutic' hill walking!

Now why didn't I think of that earlier!

Maybe I'll have time to brush up on general hill knowledge

Wet wooden planks are a menace!

Do give yourself a proper chance to heal after such a bad break. Four weeks sounds more realistic to me.

Och bad luck with the wrist there Fi, I'm sure it wont hold you back for long

Good job you were almost back, cant imagine walking off the hill with a fracture would be much fun..

I did the 4 in remarkably similar conditions by the looks of things.. must of been a good day up until the planks of woe..

Hey guys,,see your walk is about 7k shorter than the WH route,,any tips on route? might get this in next weekend..Cheers guys

GillC wrote:Hey guys,,see your walk is about 7k shorter than the WH route,,any tips on route? might get this in next weekend..Cheers guys

Looks like it is the WH route, they just used two cars to save on the road walk, ie they cheated

hahaha,,,im looking at this as a possibility next weekend,,wont be a two car trick though lol (next you'll be saying they used the gondola for the Aonachs!!!!!