Anytime I`ve read about Ben Chonzie all I`ve saw is how people have heard it`s a dull hill, a boring hill even, but after they`d been there they said the opposite. It was time to find out for myself. I mentioned to Jim that we should do it and after finding an undull route on another site we decided to go for it. The route would horseshoe the Loch Turret reservoir and take in the Corbett, Auchnafree hill as well as Chonzie. It was sure to be a good day because the weatherman said so

As we drove up the sun was rising, the birds were singing and the skies were blue....except above Chonzie. A great big dull grey cloud hung over it and most of the west side of the loch. We parked in the car park at the dam and headed along the path on the right of the loch. Loch Turret from the dam

The path is a landrover track,still frequently used as we were soon to find out as we stepped aside to let a roaring quad zoom by. We were supposed to go up Choinneachain Hill but as a text message error between us meant that we didn`t have a map we carried on along untill we reached the small waterfall coming from Bhaltair burn. 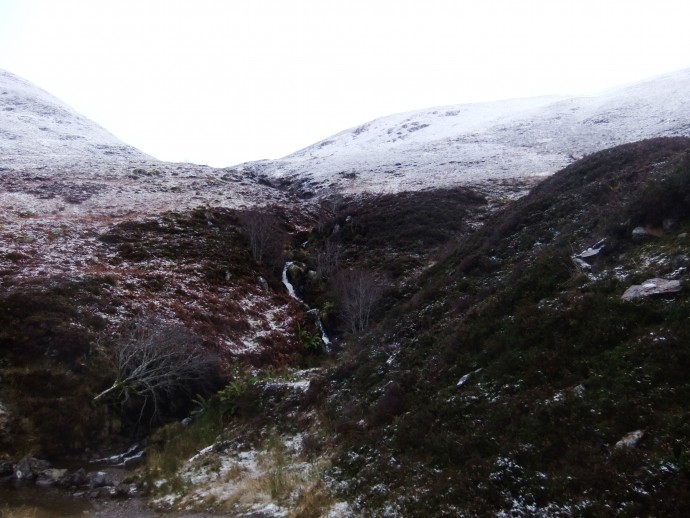 From here we would head up onto Ton Eich a small hill, 727meteres, before Auchnafree Hill. There is a path here that leads you into the heather but quickly disappeared under the fresh snowfall from the night before. We made our way up through the snow covered heather and after a bit i went to put my balaclava on because my ears and head were getting cold. It was as i pulled it over my head I wondered were my hat was, which had earlier been on my nut. I looked around and walked back down a bit, but it was nowhere to be found. Second hat lost on a hill

The wind had picked up and there was some fluttering snow. It was a steep climb up and we reached a small cairn overlooking the loch. From here we headed for Auchnafree skirting around the side, missing out the summit and keeping away from the valley below. It was a more relaxing section of the walk, almost flat and the snow and wind had eased off for now. We crossed Gilbert`s Burn at the head of a small gorge and over onto another land rover track. We followed this for a bit , i think you can follow it all the way to the summit, but we opted for a more direct route over the brow of the hill. Between the snow on the ground and the low cloud we couldn`t see much but our internal compasses must have been working well as a large cairn soon came into view. This large cairn is not the true summit, that is marked by a smaller cairn about 20 metres to the east of it. We stopped here for a break but it wasn`t such a wise decision as the wind picked up again and we were freezing by the the time we moved on again. Although we had no map, we did have some notes with us, so we knew to follow the fenceposts down the other side towards the bealach separating us from another small hill A` Chairidh. When we got on top of this one and were about to descend, Jim raised his fingers to his lips

He had spotted some deer below us and we stood for a while taking pictures of them before they got a whiff of us and moved on again. I can`t remember if this was the first or second time we saw them. We headed down the hill in separate directions as Jim tried to stalk the deer and I answered another call of nature.

The conditions underfoot had mainly been okay but there were some moments when you put your foot into white and it came out black ! the opposite of the Daz effect I suppose.

We were now at low ground below Ben Chonzie which was really mushy and the long grass was to wet out trousers more than a bout of incontinence. As we approached ther was two ways to go up, a path to the right or a gully up to the bealach on the left. We looked up to the right to see a group of walkers with a bunch of dogs, and with Jim`s record with dogs on hills we decided on the steeper gully.

It did get us up quickly though as the doggy gang passed just above us we reached the top. We thought it best to stop here, wre we had a rest a munch and brewed up some hot chocolate. 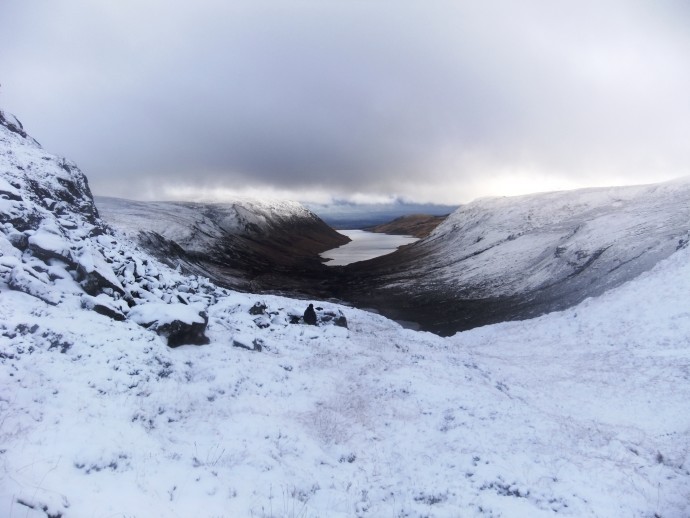 view from the bealach

Fed and watered we now had the final climb up to the Munro summit. It was steep and snowing again and i was relieved to see the summit shelter. We didn`t hang around for long, having a quick chat with a couple of guys from Edinburgh before heading off again. It was getting quite wild up there. We hoped that we would see some hares on our way down and we weren`t to be disappointed as some darted here and there between rocks and holes. We made our way along keeping the Turret valley close in our sights but the wind and snow/sleet were getting stronger and we hoped for a way out of it. It was a long time coming but eventually we got ourselves into the Coire nan Columan and immediately the wind and snow were gone.

It was just a case of getting ourselves down the lochside and a long walk back to the car. Tired, yes. Dull, no thats the snow on tommy now for the way down 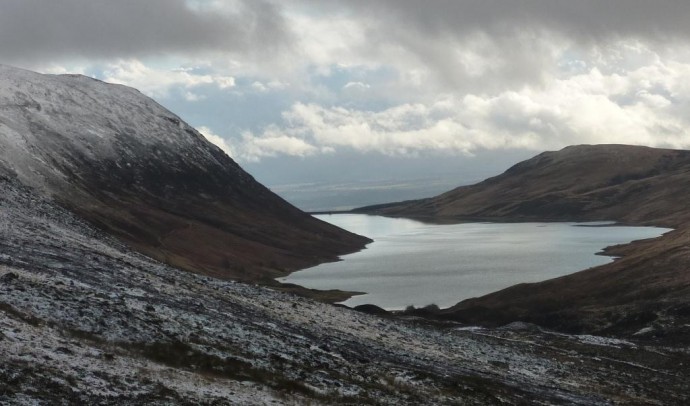 tommy looking to where we have still to get to 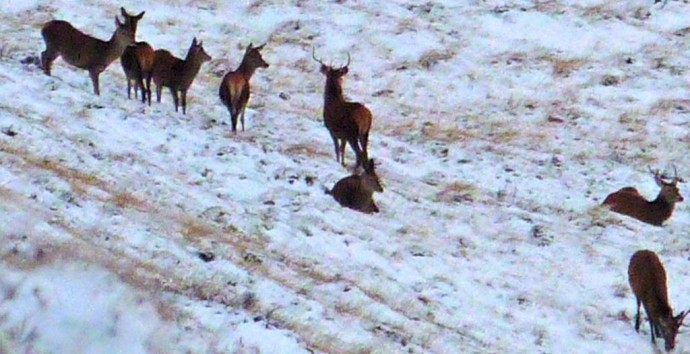 sneaked up on them to get this pic thanks, I think it was the best shot i took all day.

Aye Jim, would have been too easy goin straight up and down

I didnt find it dull at all, done it in the snow too, dont think your pics make it look dull either

thanks Gammy, how`s the ankle ?

Tomsie wrote:I didnt find it dull at all, done it in the snow too, dont think your pics make it look dull either

cheers John, i think any hill would be good in the snow