We had left the house early as we were undecided exactly which hills to be climbing. Armed with the forecast and various maps we had headed east to Tyndrum, once there we decided Glen Coe it was and Beinn Dorain and neighbour where the chosen targets. Parked at the Bridge of Orchy hotel, we looked across the road to the hills, they were……well, shall we say very white and the tops where in the clouds.

The forecast was for the day to get better, and looking into the distance this seemed to be the case. The views where already special and it looked set to get better. On leaving the car we passed a couple of walkers getting kitted up and they commented on “Wee Guy” and asked where we were heading. When I told them we were going to the summit they seemed a little shocked (obviously they had not met Kyle before, aka “the mountain goat”). So we set off up the lane to the railway station at 0900 hrs. myself Kyle and Marley. Under the railway we went and onto the open hillside, to be honest I was a little apprehensive about us reaching the summit of Dorain, never mind its neighbour. I and Kyle always have our bailout options, basically what is the plan if we want off the hill fast and safe if it all gets too much, better safe than sorry.

So armed with this we pushed onwards and upwards, as usual at quite a fast pace. Soon we were at the snow line and it was here that we had our first wee rest and snack, Kyle opted for the usual Mars bar followed by a boiled egg and several swigs of Lucazade sport!

Ten minutes later and a couple of layers added we were off again heading for the bealach between Beinn Dorain and Beinn an Dothaidh. The snow was getting deeper but on the plus side it was making the boggy sections less wet. We reached the cairn on the bealach at approx. 1100 hrs. and made the right turn for Dorain. 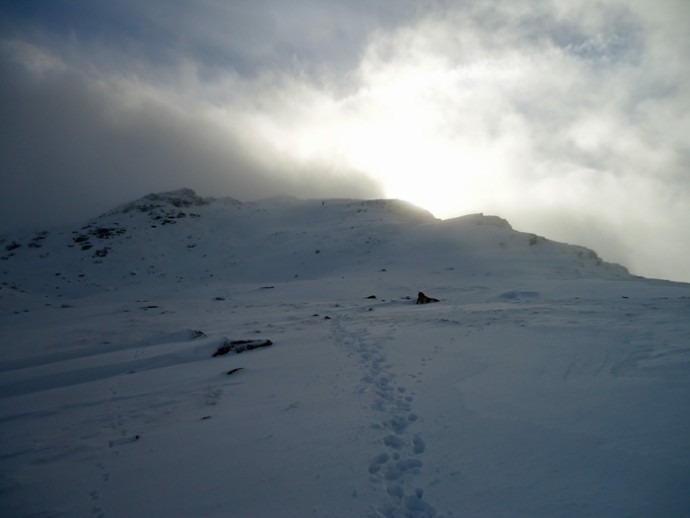 In our plan we had opted to do this Munro first then if time and conditions permitted complete Dothaidh before returning to the car. Dorain is the longer of the two routes heading from the bealach which was the main influencer of our decisions. 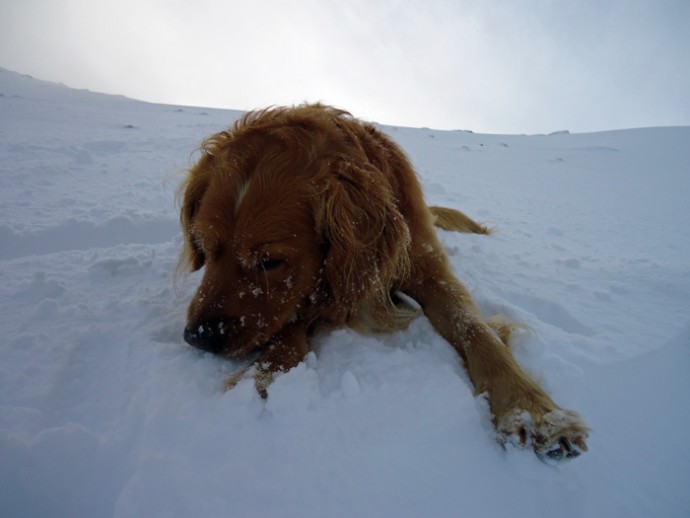 Anyway, soon after the bealach the climb really started, the snow was deep and getting deeper, it was steep, no make that very steep in places. Wee Guy in training for Everest 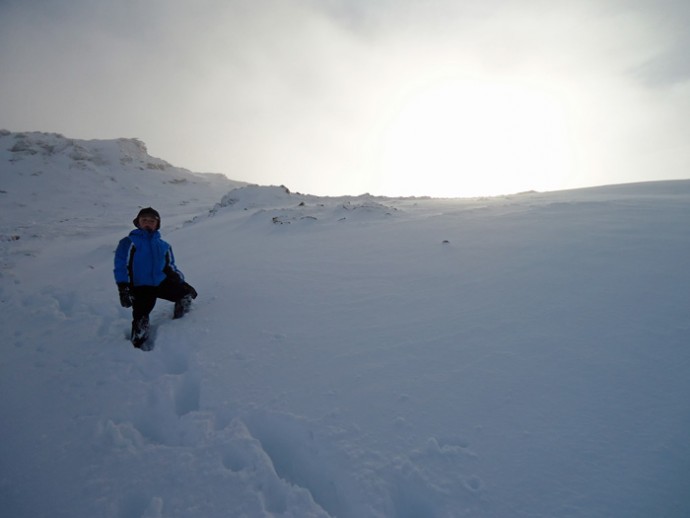 To be honest, I found it tough going, every step I sank up to foot deep in snow, however Marley and also Kyle seemed to have developed a technique similar to walking on water or should I say walking on snow!!!!!

They rarely sank more than a few inches into the snow, it must have been a weight thing or they have been blessed!!!! Wolf on the ridge aka "Marley" 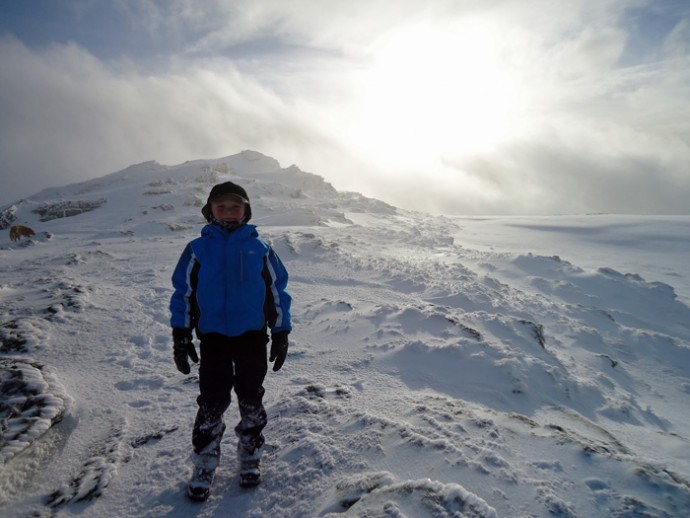 Final push to the summit

It took us what seemed like forever to make the final ridge before heading to the summit cairn. We laughed and joked along the way; at one point I was led face down in the snow after sinking and as I lifted my head was swiftly struck by a snow ball from the “Wee Guy” clean across the head which sent me crashing backwards!

The traverse to the summit was amazing, it was great to show Kyle all the dangers of the snow on the ridges, and he really appreciated the conditions, smart kid for 6 yrs.

We held hands as we approached the summit cairn at 1,076 meters; it was an emotional moment for sure. 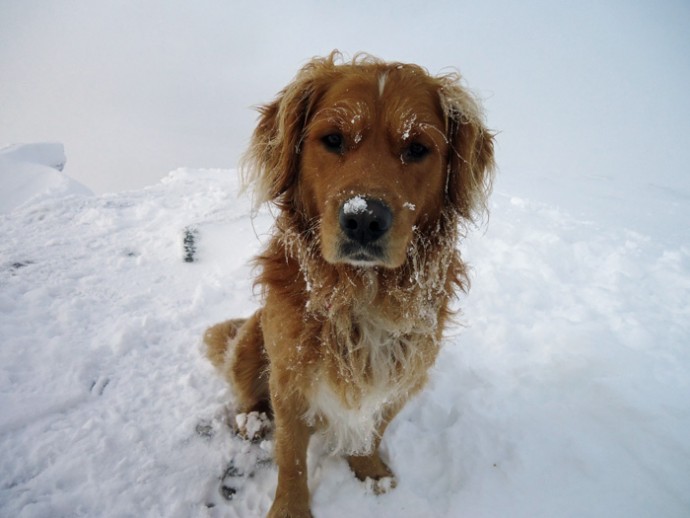 We could not believe that we had achieved it. It was pure guts and determination that had put us there in those conditions. So….. 6 years old and on the summit of Munro 28 (that’s 28 since April 2012).

It was 1230 hrs now and we got our warm kit on, got a shelter out of the wind and had lunch and hot drinks. We had now decided Dothaidh had escaped us on this outing, we spent a while at the summit, laughing and joking as per usual and of course taking pictures. We left the summit and after 10 mins the clouds lifted and gave us some spectacular views. We passed some people on the way down to the bealach and they were puffing and panting, we let them know that it did not get any easier. They all seemed very impressed that the “Wee Guy” had summited. We had a very leisurely journey down and as we passed the bealach Kyle pointed at Dothaidh and said “we will be back you filthy animal”!!!

I could not stop laughing for a long time after that comment. We stopped to fill up the flask with snow in order for Kyle to take this home as a wee pressie for his sister and mum. We got back to the car at 1515 hrs. safe and sound. What a day, what an adventure. My head cannot cope with all the memories we are generating. Hope you have enjoyed our latest adventures in the hills. I definitely enjoyed reading that

Ooh what an excellent day out! Wee guy's got more munros than me (jealous haha). Superb pictures on this one as well. Got 29 planned?

very well done to the wee guy and you plus the dog to.... the wee guy looks to really enjoy himself on the hills.

Yeah, Kyle loves it and I think Marley does too!

Lenore wrote:Ooh what an excellent day out! Wee guy's got more munros than me (jealous haha). Superb pictures on this one as well. Got 29 planned?

Thank you Lenore, yes it was indeed!

I bet you are jealous, not many mountains in the Netherlands!

We think we are going to return and complete Ben More, mainland as it defeated us a short while back, Kyle and Marley have got a score to settle!

quoman wrote:very well done to the wee guy and you plus the dog to.... the wee guy looks to really enjoy himself on the hills.

Cheers Quoman, he certainly does!

Thanks for the kind words Robert!

top man, it was grim on Saturday contrary to the forecasts! We were in Drumochter and I found it a real slog on Carn na Caim and its unpronounceable brother

so fair play to the wee man

Once again the Wee Man Mountain Goat completes a munro. 28 in just a few months is amazing going.

More than me this year for sure. Did these 2 when it was a bit icy but no snow and agreed that the Dothaidh is very boggy indeed. But not as boggy or even as steep as Ben Ime.

Doesn't Marley complain about frozen paws at all..... sure you can probably get doggy boots ....

Great photos of you all