A quick Chrulaiste – or your chicken will be cremated

A quick Chrulaiste – or your chicken will be cremated


“Delicate” would be an adjective best used to describe the atmosphere left behind at the bunkhouse when Graeme and I set out on Sunday morning. After an early morning shower of rain, wisps of mist hung low across the glen but the odd hint of ridges above suggested that it might not be set in for the day. However, there was no stampede to join us.

Graeme’s text was enquiring: when will you be home?

Mine was more direct: the chicken will be ready by six.

So, a quick Corbett before the drive home and all should be satisfied. With one car left at Altnafeadh, we drove on to the Kings House to do a traverse of Beinn a Chrulaiste. 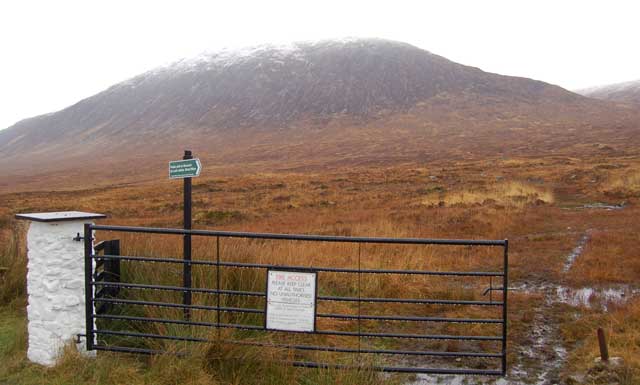 Beinn a Chrulaiste from Kings House

Suited and booted against rain that was already in the air, and an ominously boggy looking stretch ahead, we were off, soon losing any vestige of track that may have existed. After a few hundred metres beyond the old road we simply aimed for a low point on the skyline then weaved round the occasional outcrop before getting above the snowline and into the mists above.

The width of ground falling away on either side gradually narrowed as height and time wore on, so route finding at this stage was straightforward. The trig point duly appeared out of the mist. Panoramic views at summit of Beinn a Chrulaiste

Time for photos and fuel, then we were off into the mists again.

Now I was under a false recollection that this was an upturned keel shaped hill. As a result I continued to be reassured by steep ground falling away to the right. By also failing to set the right scale on the GPS I was not disabused of this impression.

When the wind on the side of my face didn’t feel quite right I thought I’d better check the map as well. After all, I was out with someone who teaches other people this sort of stuff so I ought to get it right.

Marrying some GPS co-ordinates with the map it became obvious that we were on our way to the shores of the Blackwater Reservoir rather than the car.

Reverting back to old technology, paper and compass brought us back to the west ridge and gradually out of the cloud, finally heading in the right direction. This was suddenly and impressively confirmed when a window in the cloud opened up. An alpine-type view of the Buachaille was revealed, its upper cliffs blanketed in snow, the view a companion for the remainder of our way down to the car. 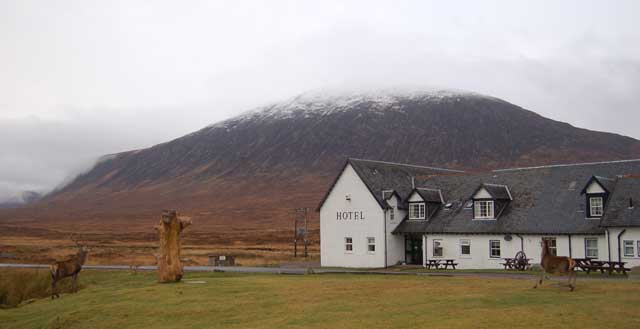 Back at the Kings House, satisfied after a good morning out, we were witness to the taming of the herd as the stag and his girlfriends were being fed. There was a man who knew what both the deer and the tourists want.

And the roast chicken was tasty too.

A fine hill in Winter white

We ascended from the the other side having some fine views towards the Big Buachaille, and its smaller compatriot with the rest of Glencoe opening up as we gained height. Views all around that day- took 205 photos, deleted few though

It is a pity is was as misted up there, you will have to go back and enjoy on a blue sky day to savour scenery

Well done you pair! A great weekend, it has to be said

Glad to hear the pollo asado was good!

A nice wee set of photos there from a nice wee short day. Cheers for the company!

old danensian wrote:After all, I was out with someone who teaches other people this sort of stuff so I ought to get it right.

Yes. Mea culpa there too. Guilty as charged Your Honour of not practising what I preach! As someone who does teach this sort of stuff to kids, as you point out, I should have been true to my own maxim. As a teacher (not just of this stuff but stuff in general, how often do I tell them it is fine to make mistakes, less fine to keep repeating them! I had a perfectly good map and compass with me and the ability to use them but, perhaps due in part to the still lingering fog in my head, chose to keep my paws in my nice toasty pockets and walk on in blind faith...... So easy to do when someone else is beside you and also willing to cut a few corners for the sake of the chicken!

Looks like it was a fine day out for you two, mistakes aside.

Much to Monty's delight, between the cloud and the bogginess I decided to leave this Corbett for another day.