I had pretty much given up on any further Munro walks this year, mainly through lack of experience and winter equipment. However a hastily arranged walk invite on Friday, ironically received while halfway up Mount Blair resulted in a response of "**** it, why not!". So i set about purchasing various bits and pieces and started to make arrangements. The trickiest of which was the realisation that as i was to be staying in Arbroath, i'd be getting up at 5am, to meet one of my walking partners in Forfar. I used to come HOME at this sort of time, not get up and go out

Anyhow, onto the day's events. My phone alarm duly went off at 4:55 (thought i'd better build in 5 minutes for me to throw it across the bedroom floor in frustration, then get up and stumble about looking for it to switch the cursed thing off). Breakfast was wolfed down. I say breakfast, but a couple of slices of toast and an obscenely strong coffee may not count, and after shivering like what seemed an eternity, the car was defrosted and I was off.

There then followed a fairly amusing (or terrifying) drive through a series of backroads to reach the A9, and by 8:00am we were ready to go. We started past the B&B and headed up the path to Geal Charn. Not long into the walk, you start to remember why such early rises are worth it: 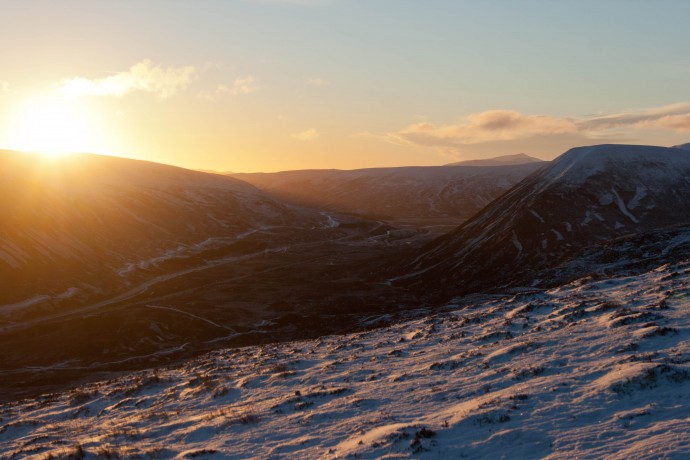 Sunrise over the A9 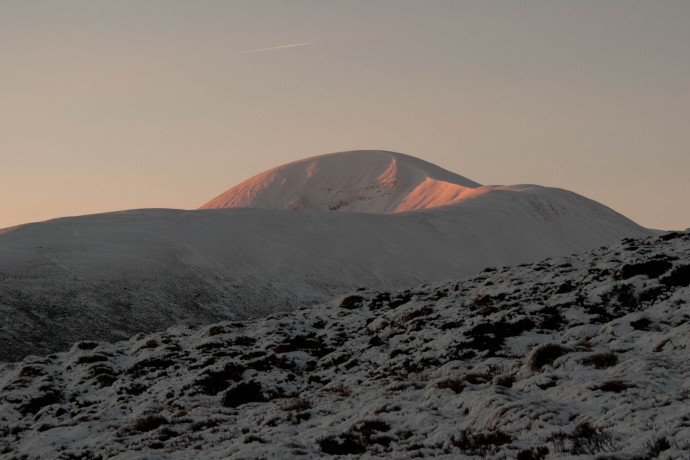 A wee look across to A'Mharconaich 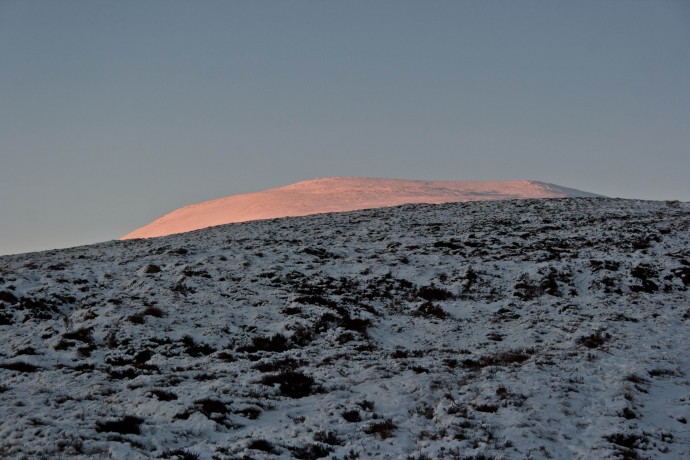 Looking ahead to Geal Charn

The pull up to Geal Charn's eventual summit isn't particularly dramatic, but some of the surrounding views were fantastic, and the snow covering really increases the "wow" factor. 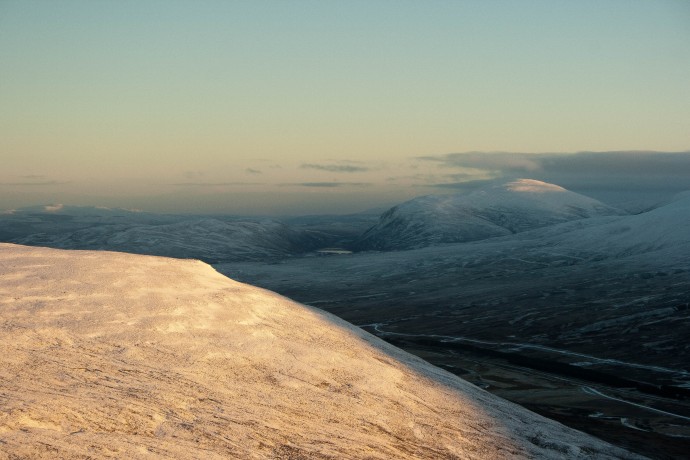 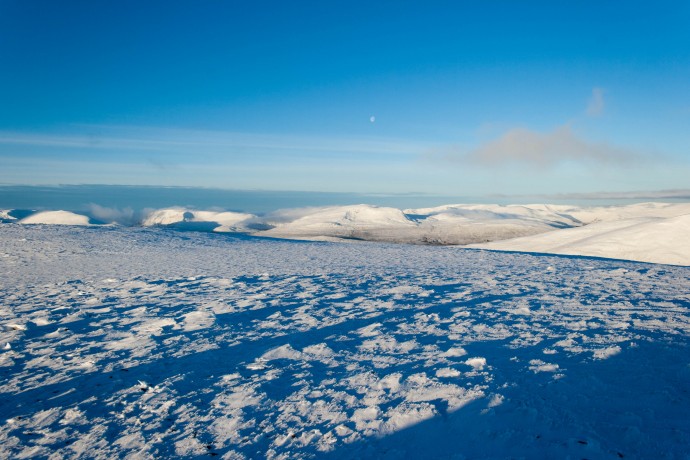 After a relatively straightforward trudge through heather and snow, we reached the summit. 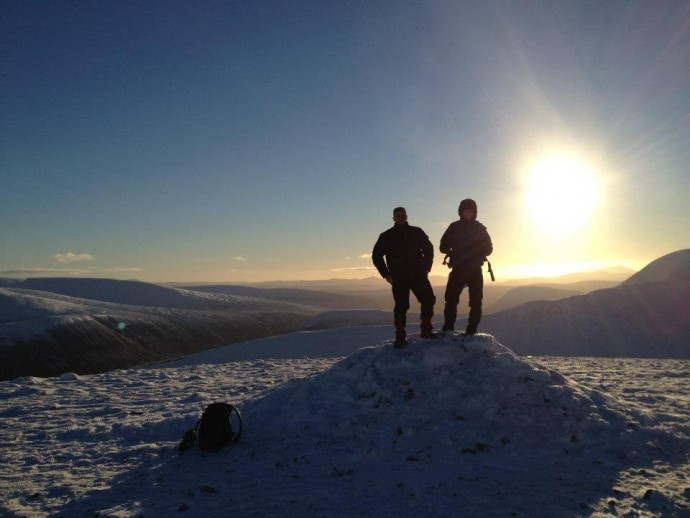 A quick wander across to a nearby cairn allowed us to get some fantastic views across Loch Ericht to Ben Alder and the hills beyond. 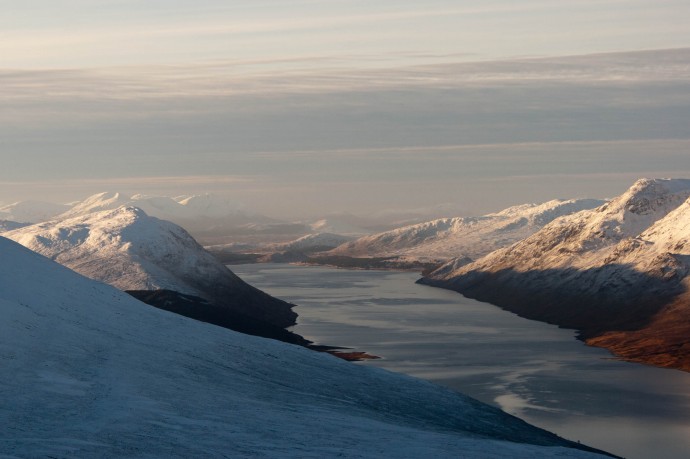 There then followed a straightforward descent to the bealach. Now, i assume in summer there's a fairly sensible path to A'Mharconaich. However we decided to follow the footsteps of the two walkers ahead of us, which resulted in a thigh burning yomp straight up the hill. The pain in my thighs and calves was eventually matched by the pleasure of reaching the plateau below the summit, and the absolutely stunning views around. 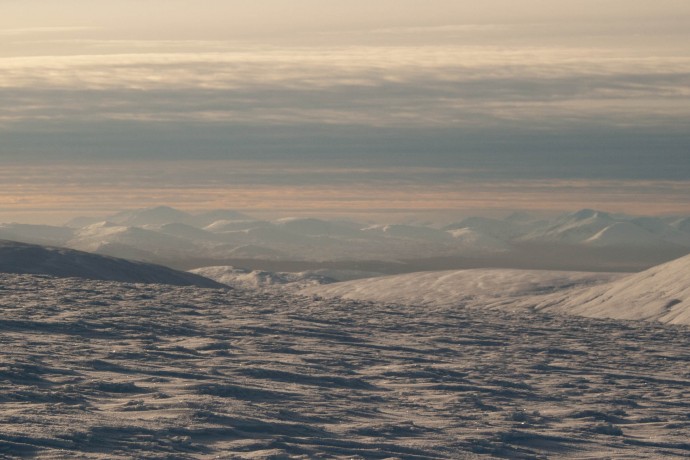 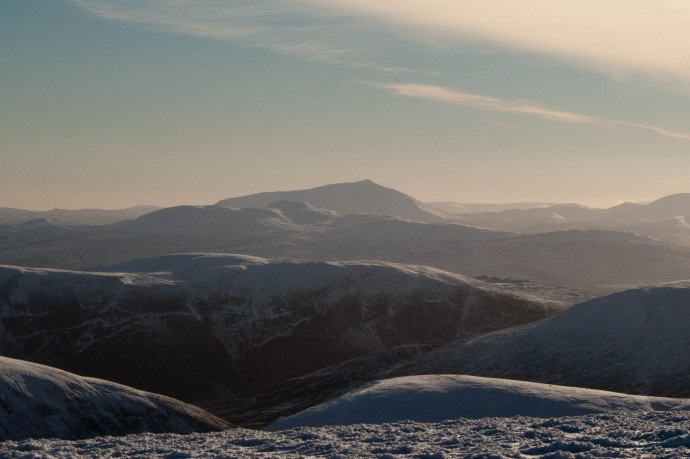 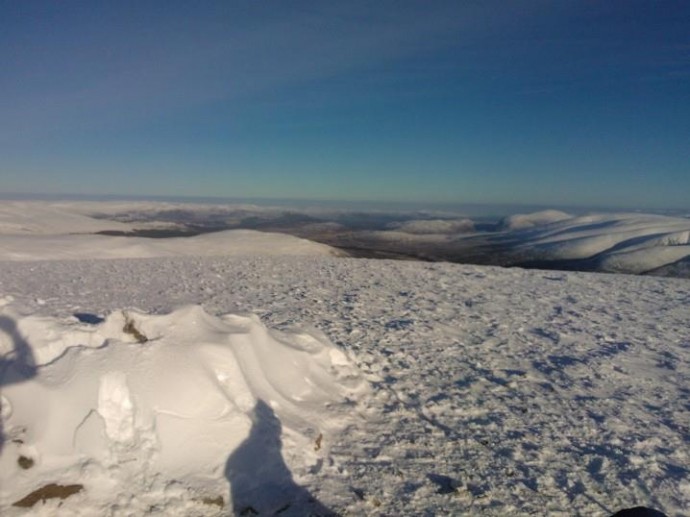 And so came the bit i was most worried about. The descent was described as a little tricky in winter conditions, and i'm still slightly worried about my ankle injury of a few months ago, so a steep, icy descent was definitely not high on my list of stuff I really wanted to do. However, the initial steepness was made much easier by the soft, fresh snow so i was able to kick my heels in and made this section with no problem at all. Looking back up towards the initial descent of the mountain was quite an impressive sight... The rest of the descent was marked by amusement at my pal Ed's attempts to sledge down the hill and my own attempts not to break my ankle on the iced over lower, heathery slopes. Finally we arrived back at the car park (not before a fun packed river crossing on icy stones) for a well earned cuppie, and the all-important task of putting fresh socks on. I believe the thermal socks i'd worn on the hills could probably have been sold to a small ex-Russian country as a weapon of mass destruction.

What have i learned from this?

Well, winter walking is perfectly accessible for a novice, when combined with a sensible head and the right equipment. It's also fantastically enjoyable. A big thanks to Magoo82 and my pal Ed for a most enjoyable day. I can't wait to get out again!

Geal Charn is a stunning viewpoint for Loch Ericht and the hills to the west and it looks like you got it at its best.

That looks a great day out with some stunning views. You're right about 5 am being the right time to be coming home on a Sunday, of course - after getting up at 5 am on Saturday, climbing a mountain or two, then going out on Saturday night. Ideal weekend!

simon-b wrote:That looks a great day out with some stunning views. You're right about 5 am being the right time to be coming home on a Sunday, of course - after getting up at 5 am on Saturday, climbing a mountain or two, then going out on Saturday night. Ideal weekend!

Maybe when i was younger

However i think such an endeavour would probably kill me now!

It was a fantastic day for it. Clear, crisp air and no breeze whatsoever.

Great stuff, your report has given me some more confidence when it comes to tackling these big hills in winter as I,m a relative newbie like yourself,
cheers

McLEOD wrote:Great stuff, your report has given me some more confidence when it comes to tackling these big hills in winter as I,m a relative newbie like yourself,
cheers

Good luck on your upcoming climbs

Wowsers! Looks lovely with snow up there - these are quite uninteresting hills to be fair, but you have some fab pics! Well Done! Save your knees and take to your arse next time - sledging is way more fun

dawnfoth wrote:Wowsers! Looks lovely with snow up there - these are quite uninteresting hills to be fair, but you have some fab pics! Well Done! Save your knees and take to your arse next time - sledging is way more fun

My pal was looking forward to sledging off A'Mharconaich for pretty much the whole day, with mixed results. He was a bit too close to the cornice on the steep part, and the rest of it was a bit rocky. He still tried to be fair!

I suspect these two maybe fall into the category of nothing special in the summer, but good in the winter. It was worth it for the views alone. I'm really hoping for a few similar days through winter to get out again.

I passed your glissade marks on the way down A'Mharconaich today

Good to see another set of photos from these hills today

foggieclimber wrote:I passed your glissade marks on the way down A'Mharconaich today

Good to see another set of photos from these hills today

Did you see the two marks near the start of the descent? I think he was a tad near the cornice

I too was out early yesterday morning, am glad you mentioned the terrifying part!! When I know that I am heading out early for a walk and the roads are well - shall we say - ICY- It always terrifys me - I am always glad to reach the start of the walk without any incidents!!!

Looks like u had every bit as good a day as we had on Sgairneach Mhor and Beinn Udlamein on Sunday 2nd of December....brilliant snow conditions, cracking views, frozen snot (!!!) lots of falling flat on the face, laughing so hard at the hilarious positions we all got into, and Bob the Border Collie managing to pee on 3 rucksacks and a hat!!!

It was a cracking day for hillwalkers! I was just down the road, ticking off a couple of Corbetts (The Sow and Meall na Leitreach). The snow was so crispy and there was very little wind - may we have more days like that this winter

I did Geal Charn & A'Mharconaich in summer time, and must say they are rather boring hills, the best attraction are the views towards Ben Alder group. Winter trip definitely makes them a proper adventure

Nice report though - looks like you had a crackin' day (but not a crackin' ankle!)