I have a couple of other reports written up which need photos added, but I thought I would add a more current one (from yesterday in fact)! With the weather being as good as garuanteed to be still and sunny today, I made an effort to get up early so I could do some high hills for a change. I've spent most of the last couple of years doing Corbetts, Grahams and other assorted bumps, but one thing they can't offer (at least not with the small amount of snow we have just now) is a good high level traverse along sweeping ridges in good hard snow.

The Fannaichs seemed like the perfect candidate: High, relatively narrow ridges (without being scary), but fairly straightforward to do in solid snow/ice conditions.


our_route.gpx Open full screen  NB: Walkhighlands is not responsible for the accuracy of gpx files in users posts
Left the house just after 7.30 in solid mist, and didn't really see anything until after Garve. However, by the time I got to the Dam at Loch Droma, I was out of the mist and the sun was almost up. It felt early, but there were already 2 or 3 cars parked up at 8.30. Hardly surprising, as it looked like a perfect day! 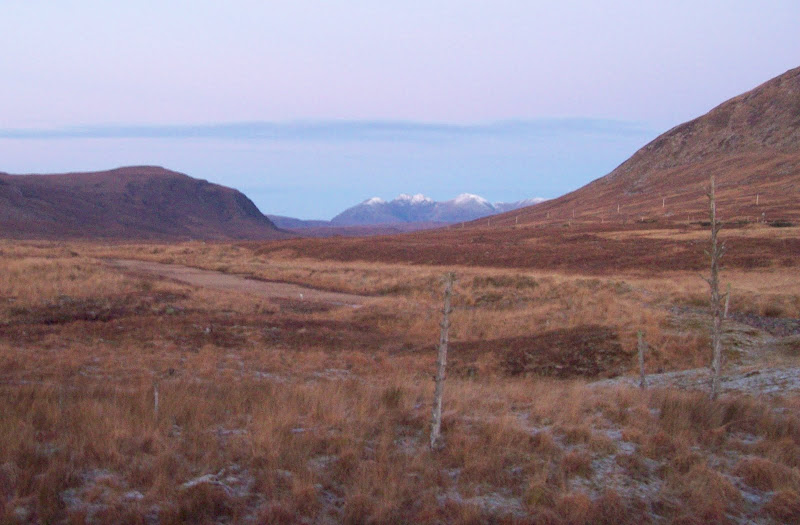 Started walking up the Hydro track to Allt a' Mhadaidh. It was frozen, and there were plenty of patches of ice to avoid. 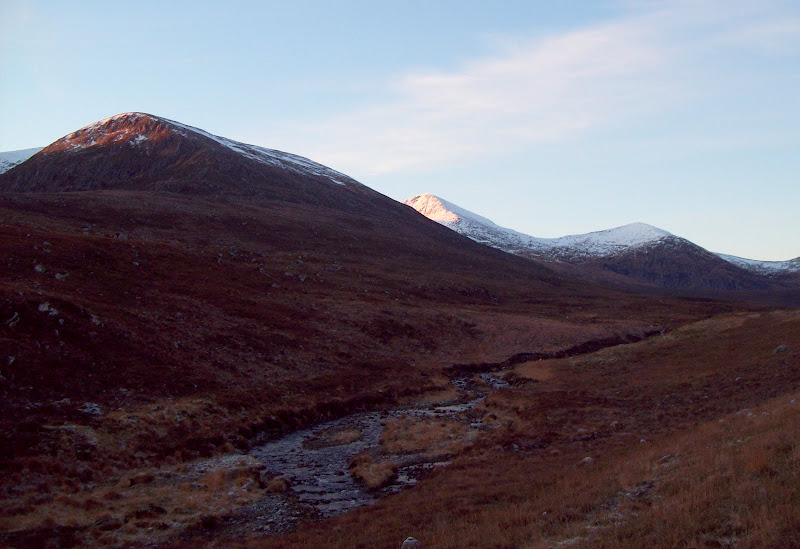 There was a rather handy path up Beinn Liath Mhor Fannaich, although I lost it higher up. Reached a tall thin cairn on the ridge to the N of the summit just before 10, and then the proper summit 15 min later. Although I hadn't needed my crampons up to this point, there was a band of snow and ice at the 800-850m level which was just about solid -I had to cut a few steps with my axe. I can only assume that there was a lot of freeze/thaw at this level, as higher up,the snow was firm, but you could dig the edges of your boots into it. Kind of perfect walking snow! 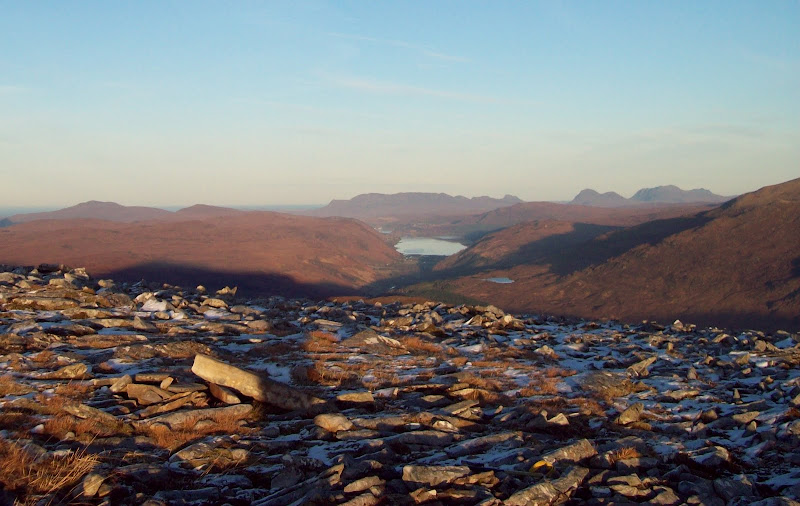 An Teallach from shoulder of Beinn Liath Mhor Fannaich: 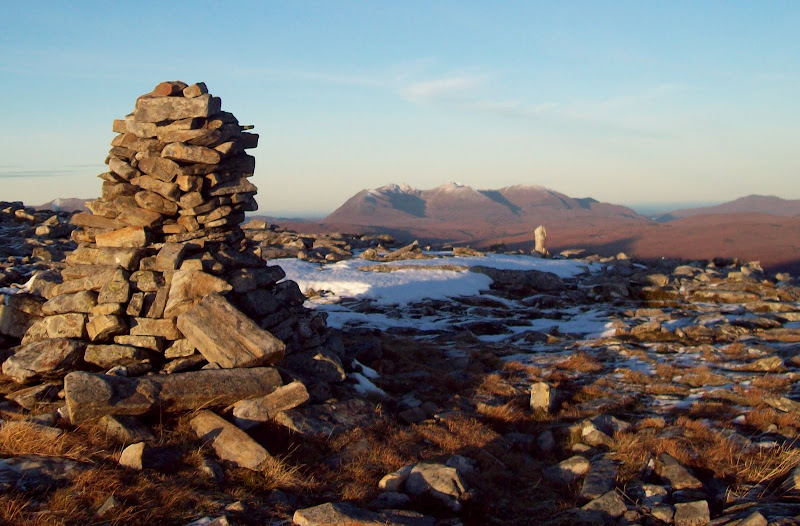 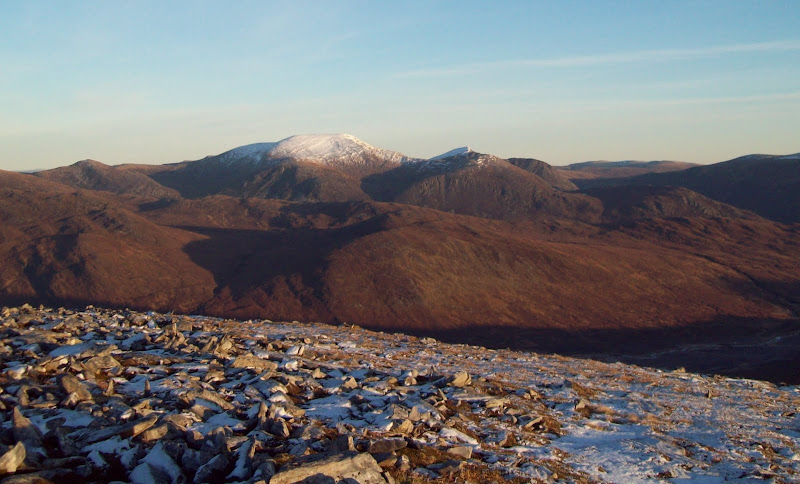 The view was spectacular, and I could see that the mist was still sitting in the eastern Firths and valleys. Sgurr Mor looked very steep from here. 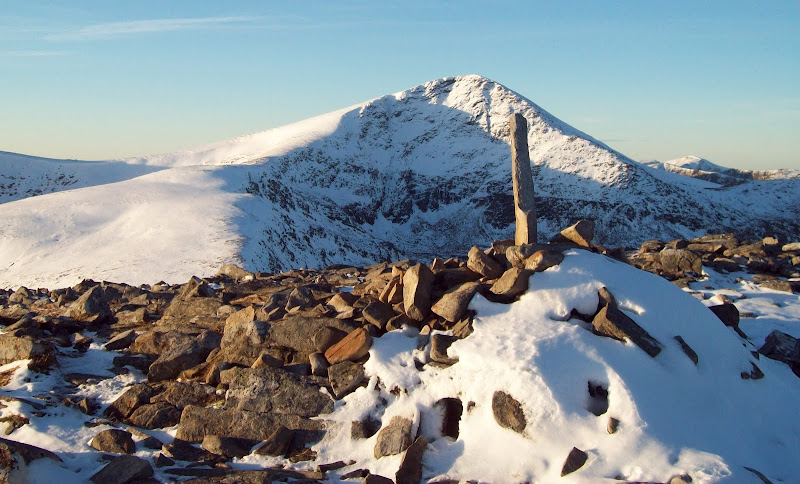 Started off in the direction of Sgurr Mor, and the going was fine for a bit. Then back at the freeze/thaw level, the going got difficult. Even though it was only a short section of steep, hard snow, I decided to be on the safe side and get my crampons on.

Despite the fact that I dislike crampons (usually forget I am wearing them and trip up), they made quick work of the steep section, and an hour after leaving Beinn Liath Mhor Fannaich, I was on the summit of Sgurr Mor. Stopped for some coffee and a snack, and admired the view. It was fairly clear, with only a faint haze out to the west. Could still just about make out North Harris though (but not in the photos-too faint). 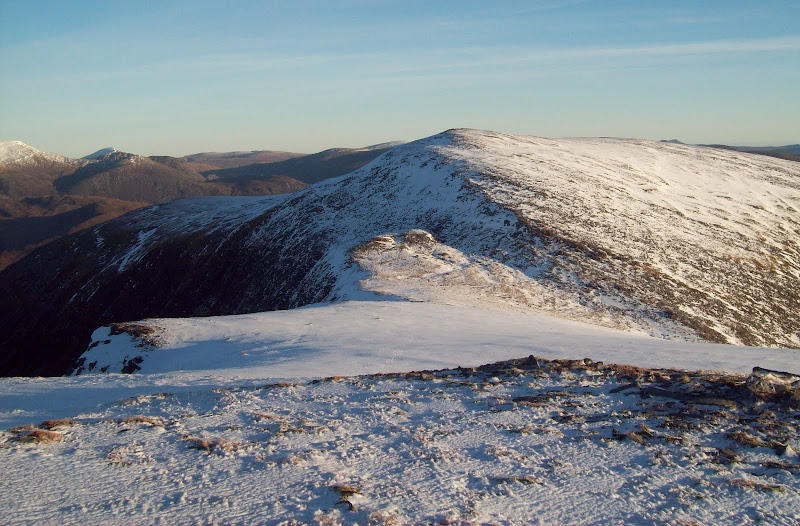 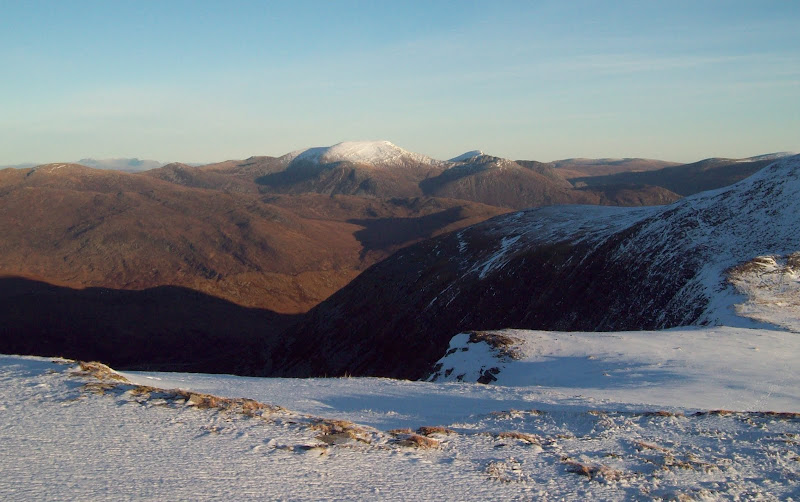 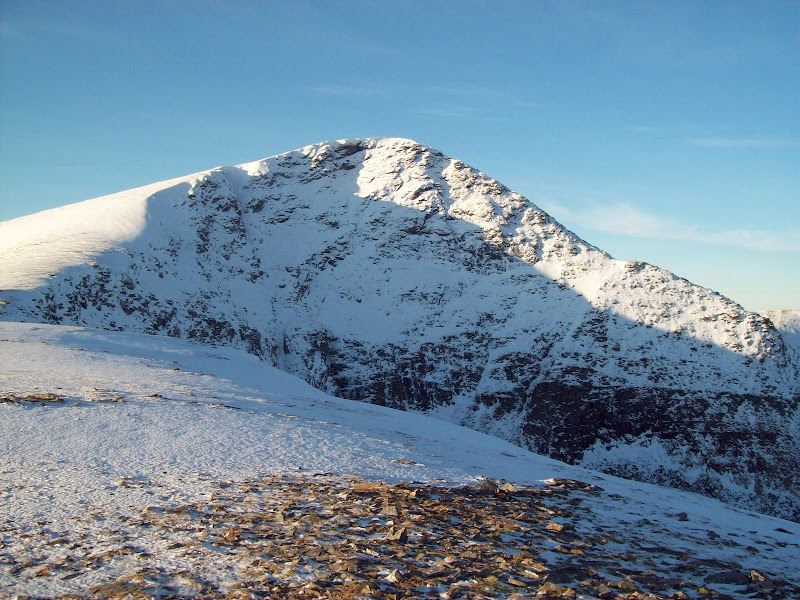 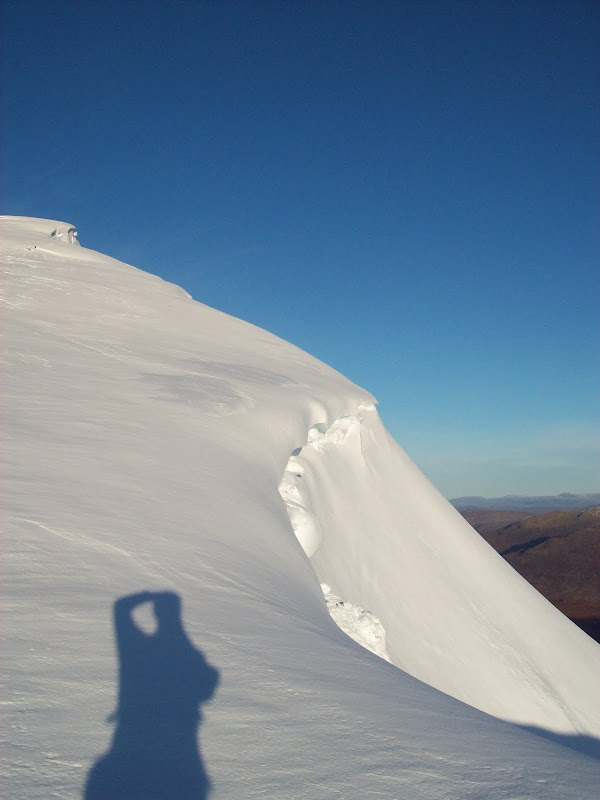 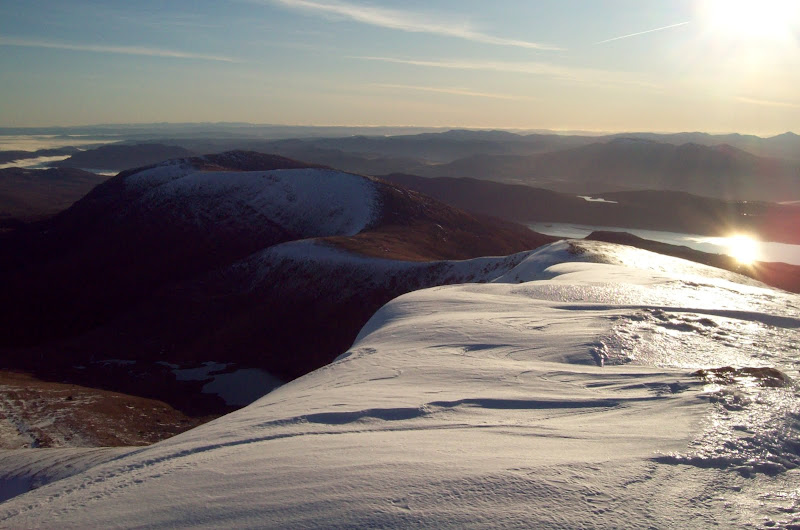 Low-lying mist in the east: 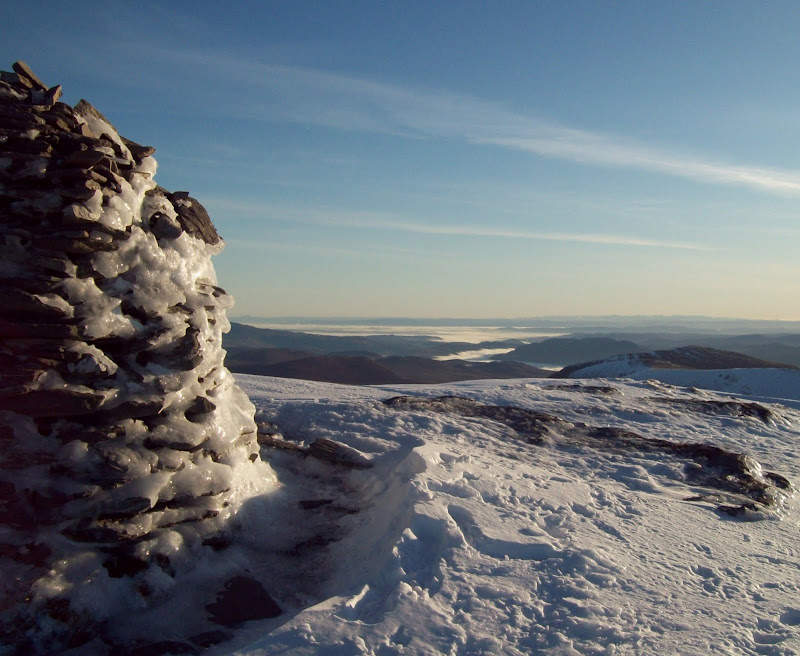 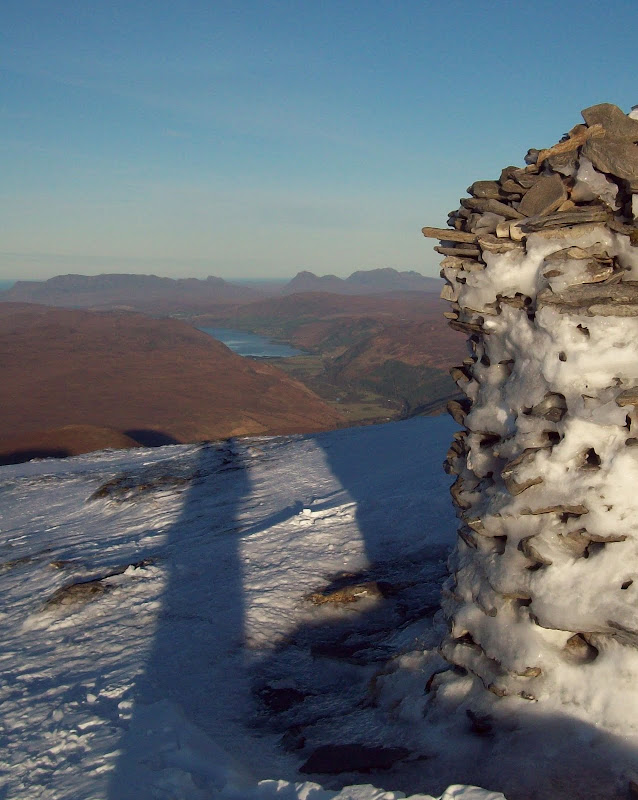 There was a bit of a cornice over the NE face, and the cliffs and cornices on Sgurr nan Clach Geala looked very impressive. I had originally planned to do this summit as well, but decided to make my decision when I got to the col.

The descent towards Carn na Criche was very steep, pretty much the whole way down, I zigzagged a bit, as for some reason I couldn't bring myself to trust my crampons walking down the steepest bits. Just before the bottom, I met a couple coming the other way who had camped out at Loch a' Bhraoin (I think) and were going to camp out again at the other end of the ridge. Kinley? 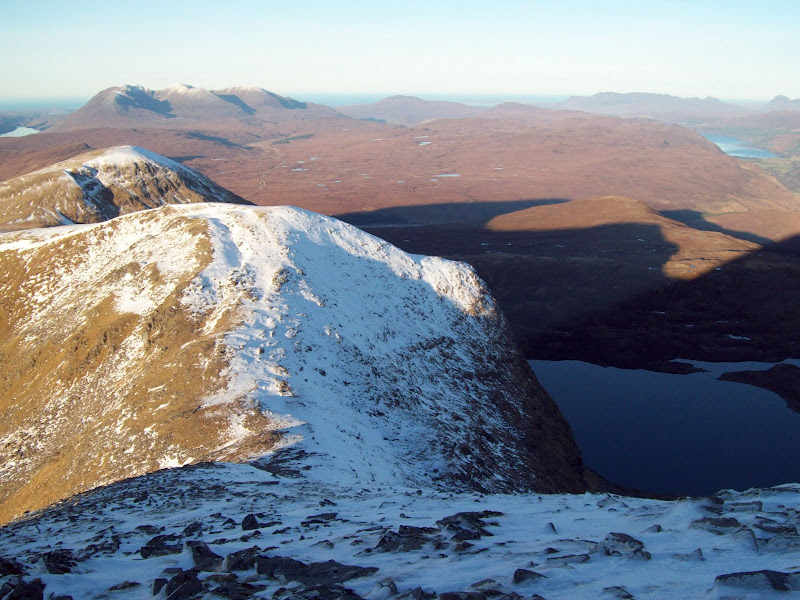 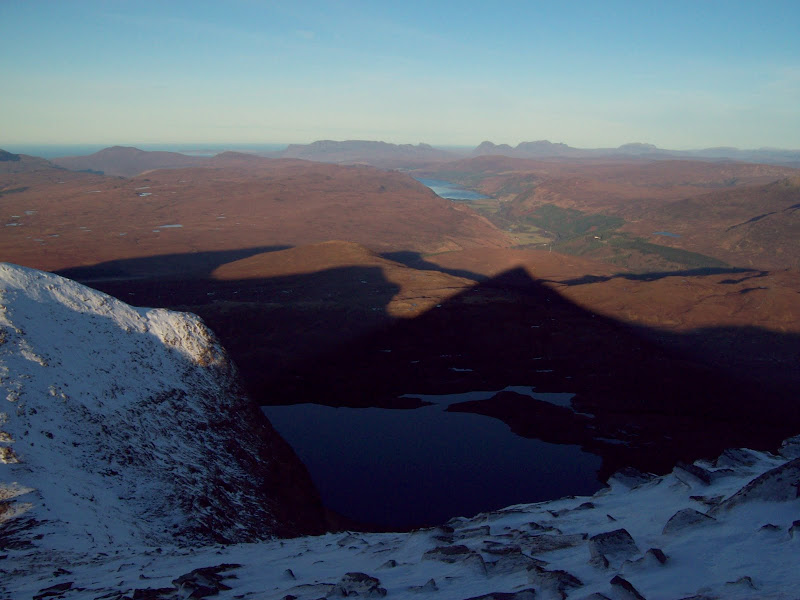 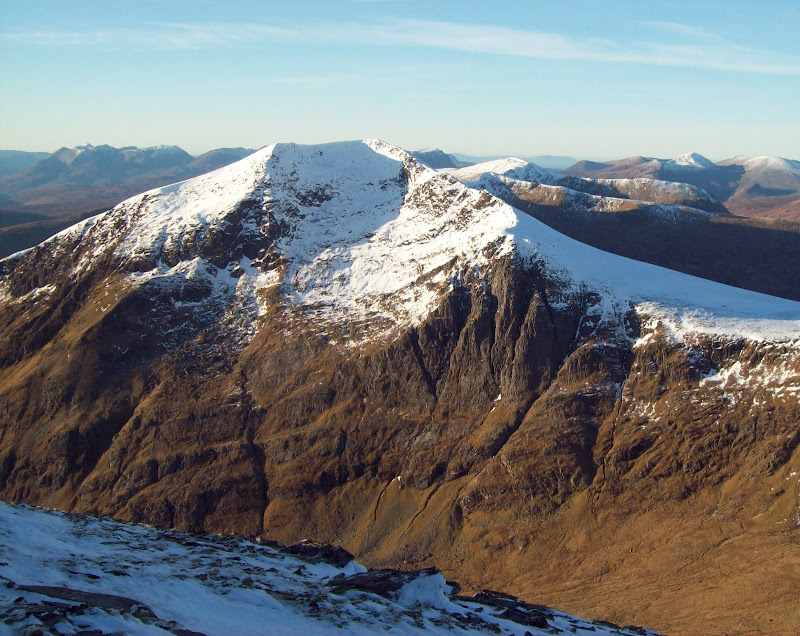 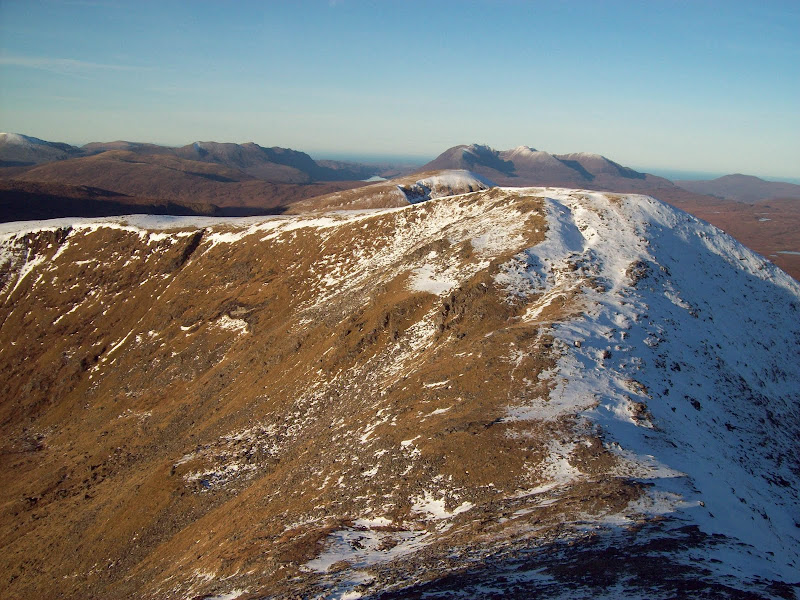 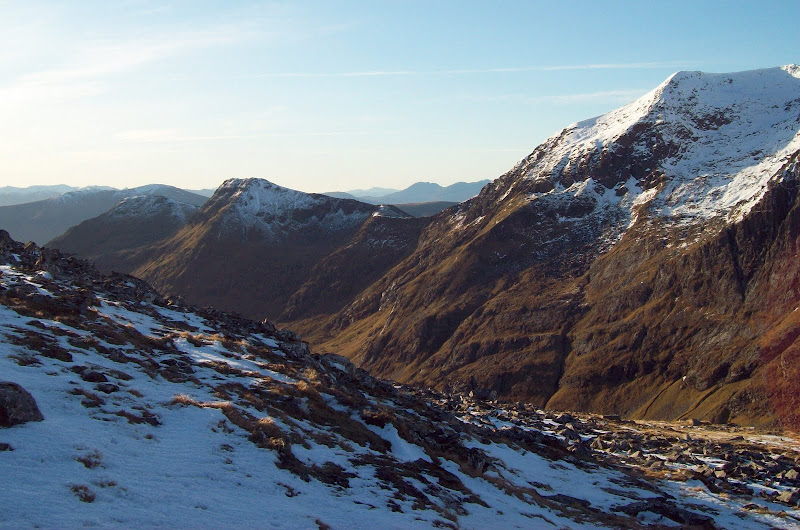 Over Carn na Criche, and I decided that I was taking longer than I had planned, so I left out Sgurr nan Clach Geala. Shame, as the NE ridge up to the summit looked so tempting (but if memory serves me, a straightforward walk). Headed down towards Meall a' Chrasgaidh, starting to feel a bit daft in my crampons, walking through the grass. I wanted to take them off, but had a feeling I would need them shortly.

Back to Sgurr Mor: 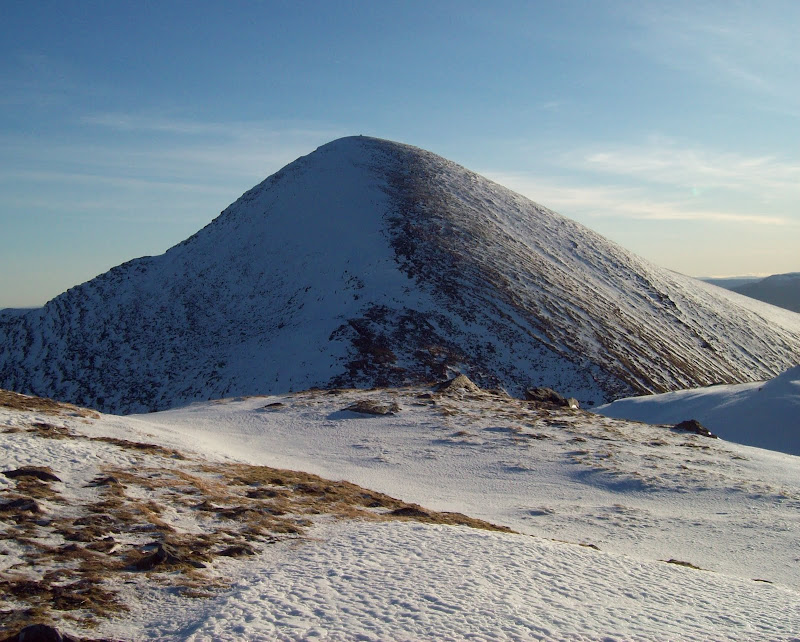 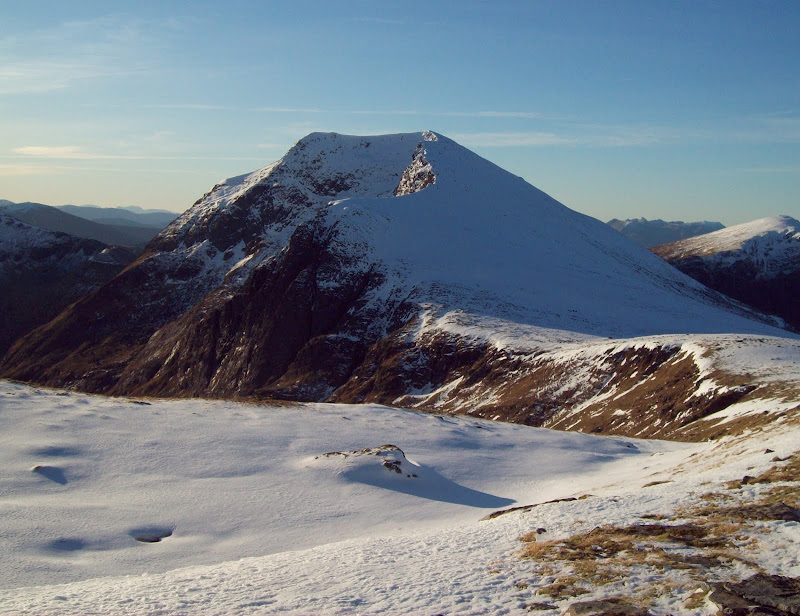 Sure enough, the col here was covered in water and frozen solid. It was like a skating rink! Strolled across it and stopped to talk to another guy coming the other way. He was off up Sgurr nan Clach Geala, then possibly Sgurr Breac. Quite a re-ascent! He mentioned that there was hardly any snow on Meall a' Chrasgaidh, and he hadn't needed any crampons. 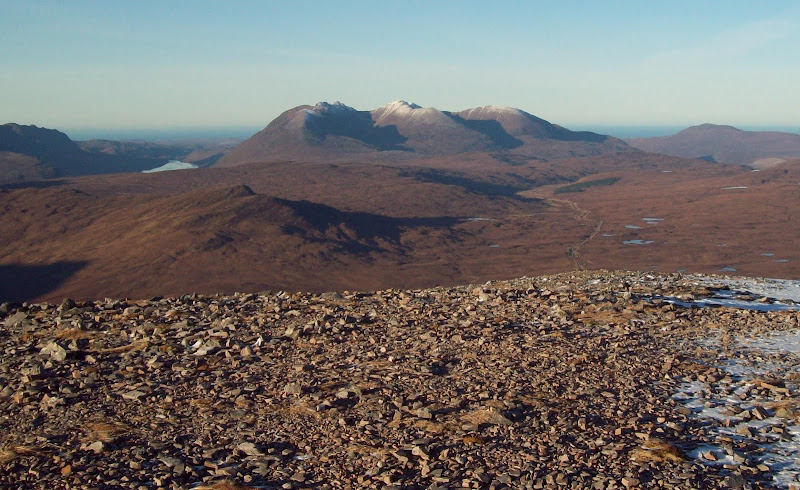 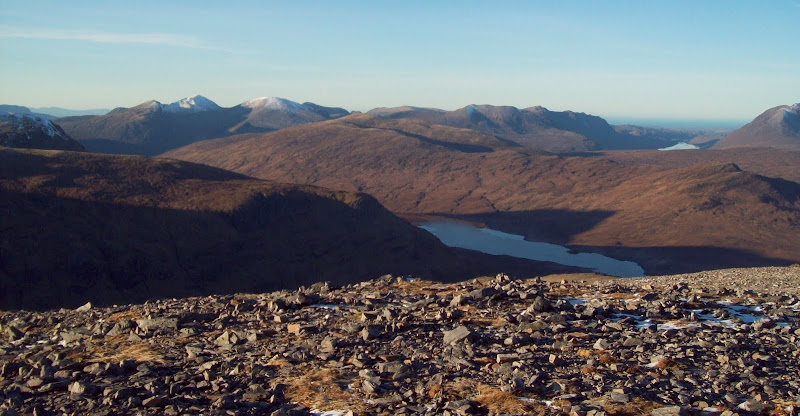 Sgurr Breac and A Challaich: 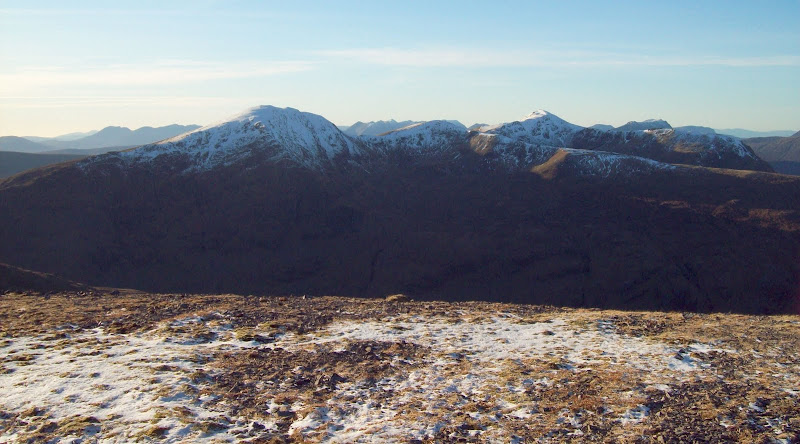 Had another stop at the summit, and decided to take off the crampons. Another coffee, then went back down to the col, where I had seen a good path coming up from Coire a Mhadaidh. Typical example of thinking that all the awkard bits were over with, then finding some more. While this is the type of path I would be happy on in trainers in warmer weather, today it was frozen into a lovely block of ice. So it was back on with the crampons for the first bit. 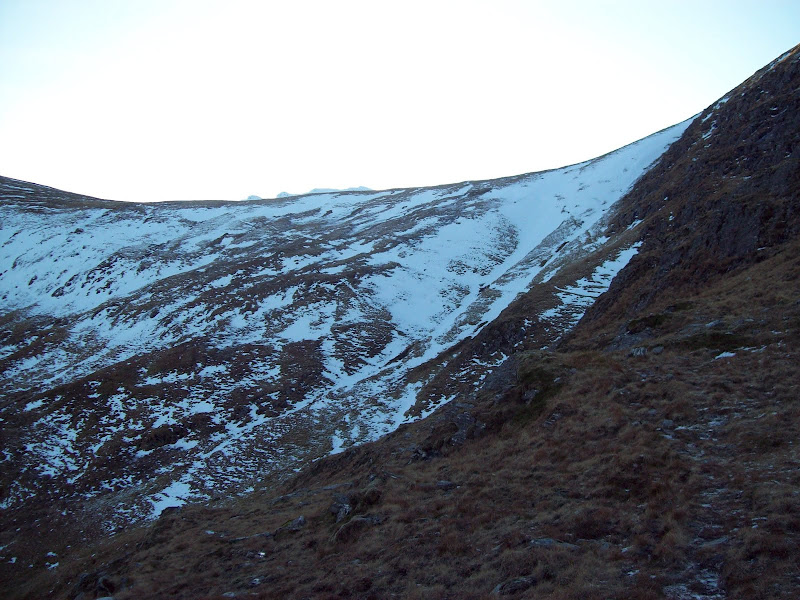 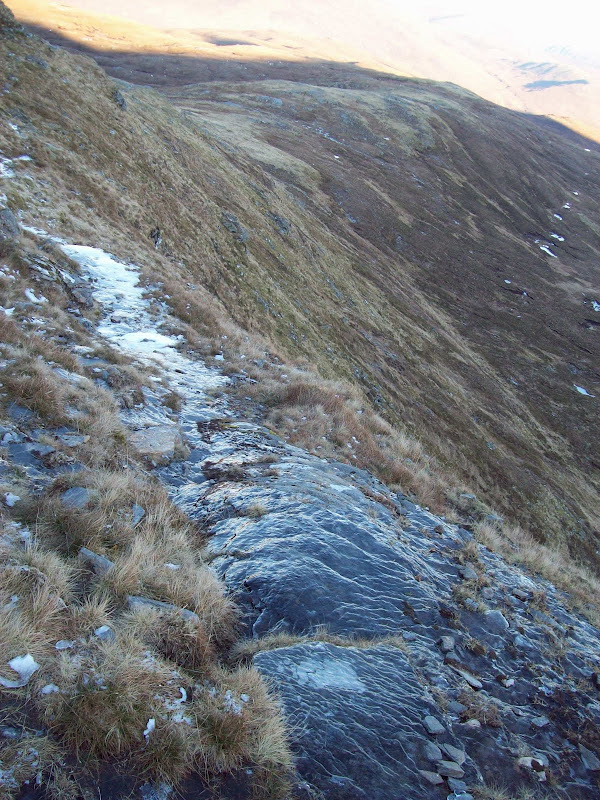 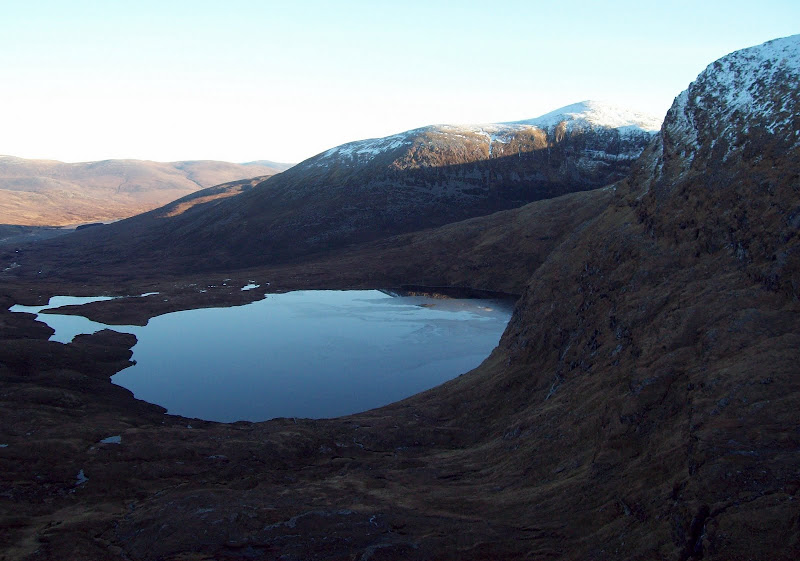 Loch a' Mhadaidh and Sgurr Mor: 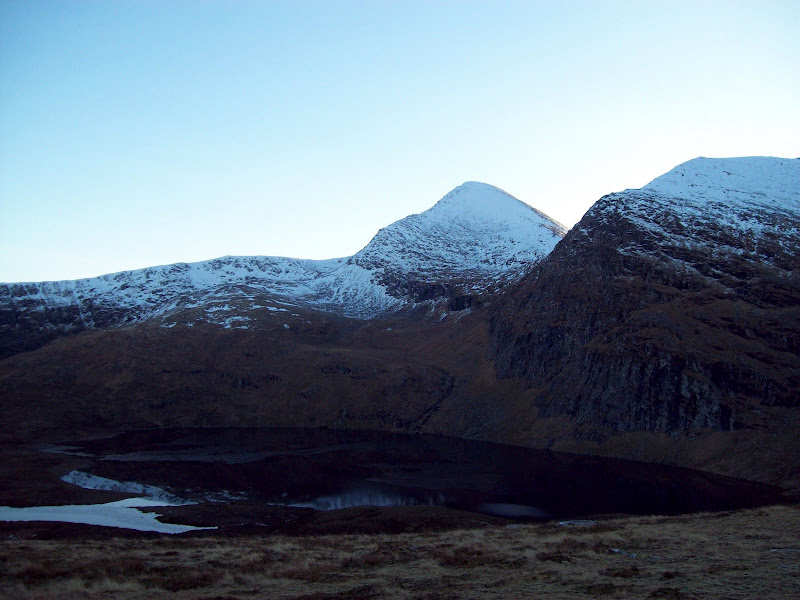 After this, I mananged to miss the path in the corrie, and had some lovely heather and bog to traverse. Luckily it was pretty frozen, which made the going easy. Passed an Argocat, and at the end of the marked path, a couple of land rovers. Easy walk out from here to the car.

Got back to the car at about 2:45, a fair bit later than I had planned. I had originally planned to do all 4 munros and be back in Inverness for lunch! As usual, this was based on one of my vague notions, rather than actually measuring the route.

When I got back to Contin, I was plunged back into mist. At home, it hadn't cleared all day, which made me doubly glad that I had got out of town!

Excellent report and pics, especially the ones of Sgurr nan Clach Geala - just beautiful... We'll have to wait to see if Kinley comes on here and says whether it was him or not!

You've made me change my mind about going to Crianlarich SYHA in March - now I think I'm going to the Ullapool one instead and doing Sgurr Mor and the Munros along the ridge to the east of it, and then probably Ben Wyvis. They look like about my standard of winter walking...

What a brilliant report

Good report there - enjoyed reading that and like the pics, especially East to Meall Gorm with the sun glaring of the distant Loch and reflecting off the icy snow.

Great reading Malky - and it looks superb. Like Kinley, I've had dodgy weather in the Fannichs so it is great to see what Clach Geala in particular can look like