Sunday looked like it was going to be the last day of the recent cold and bright weather, so it was an opportunity not to be missed.

My list of unvisited singles was scanned and an icy snatch was planned on Beinn Tulaichean. There was also the added advantage of going on to Cruach Ardrain to capture the view that had eluded me eighteen years ago. I could exorcise the ghost of thrashing around in the clag optimistically hoping, in pre-GPS days, that the top had actually been reached. Once off the A84, a slithery, snaking start was made up the icy road towards Inverlochlarig. Horses huddled shivering in little groups under their blankets, a red squirrel stood out marvellously on the frosty white of the road surface and the early morning pink sunlight tipped Stob Coire an Lochain under the waning moon. It was a perfectly enticing winter morning: bring it on. Out in the cold and beyond the farm I was lured up to the warmth of the sunshine on Beinn Tulaichean. At times on the lower slopes there was just a little give in the frozen ground to remind of the bog-fest beneath: quite a relief to avoid wet feet at the start of the day. 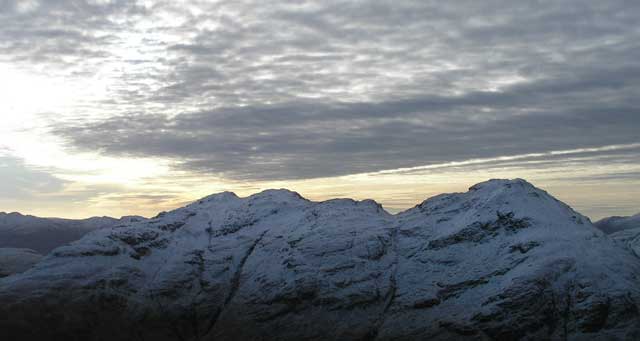 It's still a potentially dark and gloomy place

I followed a variety of tracks to pick my way through the craggier upper reaches and welcomed the fact there was no succession of false tops. The angle eased off and the summit was in sight a couple of hundred metres away as the view opened out: far, far more than the twin peaks of Ben More and Stob Binnein, against which upward progress had been measured. 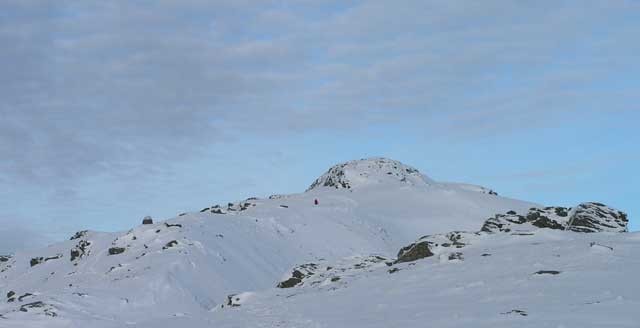 Summit of Beinn Tulaichean ahead

A penetrating chill was no encouragement to linger. The panoramic views in all directions certainly tempted a saunter, while a succession of bristles on the horizon illustrated the popularity of Cruach Ardrain. Just forty five minutes later, after sticking to the crest of the ridge to maximise the views, I arrived at the second munro of the day: my “confirmation” top. It was no longer a clag-shrouded day from a decade or two ago, I was now reassured to be on the top as well as rewarded.

My return to the glen below and the track to Inverlochlarig followed the snow trails descending directly from the small saddle between the two tops of Cruach Ardrain rather than the bealach on the way back to Beinn Tulaichean. The gradient, depth and condition of the snow safely and easily opened the way down before tracks snaked between crags and outcrops to emerge below the snowline and to the track back to Inverlochlarig. After two consecutive snowy weekends out, it looks like the winter has well and truly begun.

Haven't been to these parts in a while now, but they look good with a covering of snow

Lovely work Nigel. Reminds me that I really need to get out more!

Cracking wee report. Like your pics. I was up there the same day from same starting point. Ideal day of the type we will see too few of over the winter.

Great stuff Nigel
Almost exact conditions to myself 20 years ago..... "nostalgia's not what it used to be"

Thanks for the report & pics

Great stuff! You had a much better day for it that we did about a month ago: we had some very entertaining navigation to find the col between Stob Garbh and Cruach Ardrain, and then over an hour of swimming to the top of CA!