Glenshee 9 in a row

Glenshee 9 in a row


We parked across from Glenshee ski centre on the A93, it only took 5 mins to get our gear on but due to the ongoing blizzard conditions, my fingertips were numb before i had even started walking.
We climbed the N ridge of Meall Gorm & followed the ridge round to the stony top of Creag Leacach [1]
Moving swiftly on we followed the N ridge along the wall to the summit of Glas Maol [2], barely pausing for breath we continued N & NE along the ridge & onto Cairn of Claise [3] @ this point the mist started to lift, improving visibility & making it easier to navigate.
As we headed E of Ca Whins to Tom Buidhe [4], the weather thankfully started to improve as did my mood.
Time for a bite to eat before returning to Ca Whins & up up onto the stony S slopes of Tolmount [5].
By this time the jacket was off & it was shaping up to be a lovely afternoon.
We descended W going past the Head of Glen Callater & Coire Kander to the summit of Carn an Tuirc [6], before making our way back down to the A93, basking in the glorious sunshine as we went, the beanie hat from the morning had now become a baseball cap, the jacket packed away long ago & it was time for the suncream [only in Scotland].
Thinking our day was done & feeling rather pleased with myself bagging 6 Munros in one day, i began to imagine sinking a nice cold beer, only to be informed that there was still lots of daylight left & another 3 Munros there for the taking on the other side of the road!
So off we went again across the A93 & straight up through the heather in the scorching sun, halfway up i was seriously beginning to toil & had to stop several times before finally emerging from the heather & making it up onto the summit @ Carn Aosda [7].
@ this point i was seriously considering leaving my mate to complete the last 2 Munros on his own but after some delberation, i had been convinced that the going from Aosda to Carn a' Gheoidh [8] & then onto The Cairnwell [9] was relatively flat with very little incline, that & the fact that if i wimped out now i would regret it forever more.
Anyway to cut a long story short, i managed to complete the afore mentioned Munros & the walk back along the A93 to the welcoming site of the car.
Looking back on the day now, i have mixed emotions an overwhelming sense of achievement having managed to climb 9 Munros in one day, tinged with the pain i endured on the final 3 Munros!
Certainly a day out that will live long in the memory both good & bad! 9.Last but not least The Cairnwell 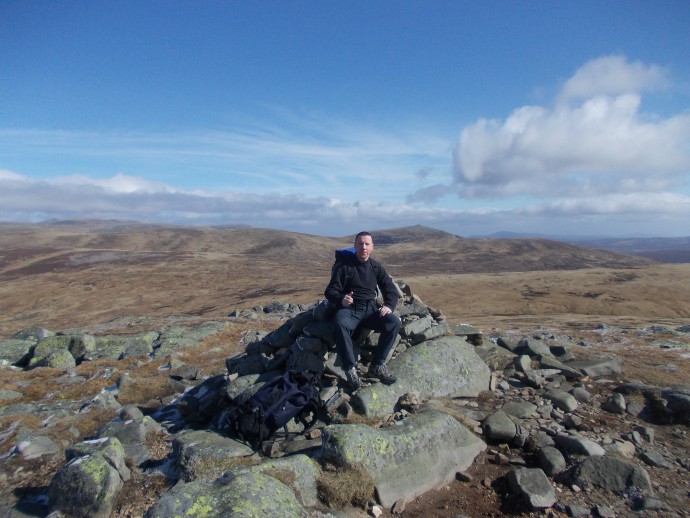 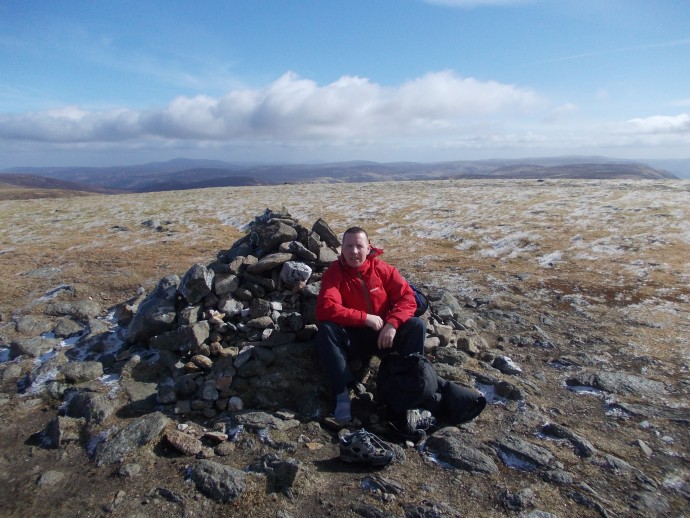 i initially thought you had done it recently ... had to check the date on your report. I thought 9 munros was helluva good going in the winter conditions.. well done

mountain thyme wrote:i initially thought you had done it recently ... had to check the date on your report. I thought 9 munros was helluva good going in the winter conditions.. well done

Ha! Ha! no chance of that in this weather it was hard enough in the sunshine