Payback for the good times on Beinn Chuirn

Payback for the good times on Beinn Chuirn

A night in Tyndrum had been on the cards for a couple of months now, organised by Nick. Having spent the last two weeks working in the Midlands and living out of a hotel, I felt full of rubbish food and low on energy. The opportunity arose to get a lift up the road with Nick, Matt and Andrew on the Thursday night, but I was running short of days off so I opted to send my gear with them and follow on Friday afternoon. I nearly pulled out when my wife got stuck in snow on the A9 on Thursday night as I thought I would need to go to Dundee and go up the road with her. However she managed to get through to Inverness by midnight, so the trip was back on. I thought there would be lots of delays due to the weather, but my train to Glasgow and bus to Tyndrum all ran precisely on time, dropping me at Paddys bar at 7:40 pm on Friday night for a few pints and some discussion about the next day's route.

Nick, Matt and Andrew had been out on Beinn an Lochain earlier in the day, and had had stunning views but so much deep snow that they had turned around before reaching the summit. The weather forecast for Saturday suggested similar snow but more wind and no views. After considering a couple of options we settled on Beinn Chuirn and possibly Meall Odhar, as we could start these straight from the bunkhouse.

our_route.gpx Open full screen  NB: Walkhighlands is not responsible for the accuracy of gpx files in users posts
The weather in the morning was calm but uninspiring, with cloud clinging to everything. The track up Glen Cononish was icy in places, but we made reasonable progress past Cononish farm to a point where we decided to leave the track. The odd clearing of cloud on Ben Oss provided some variation on the clag theme. 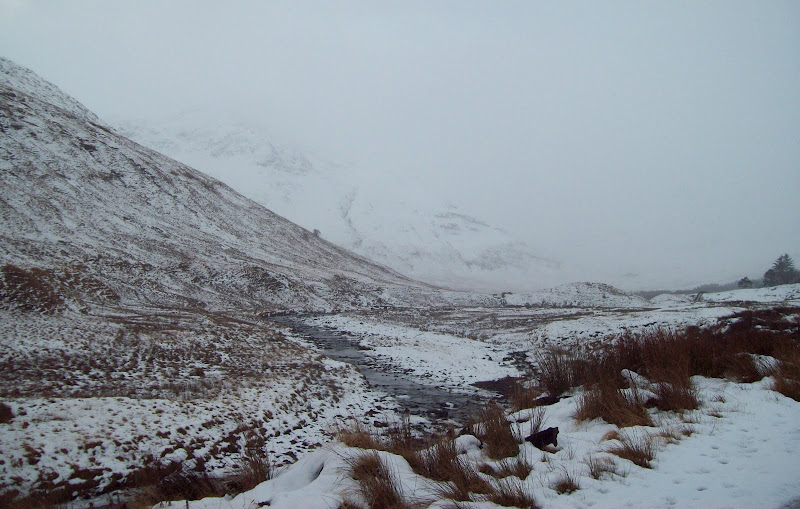 A steep plod through snow of varying thickness took us level with the top of the Eas Anie gorge, although we couldn't see it. Up here a precussion rig set up for drilling boreholes - obviously related to the planning application for the Cononish gold mine extension. This provided some minor engineering-related discussion as we tried to work out exactly what was being done. 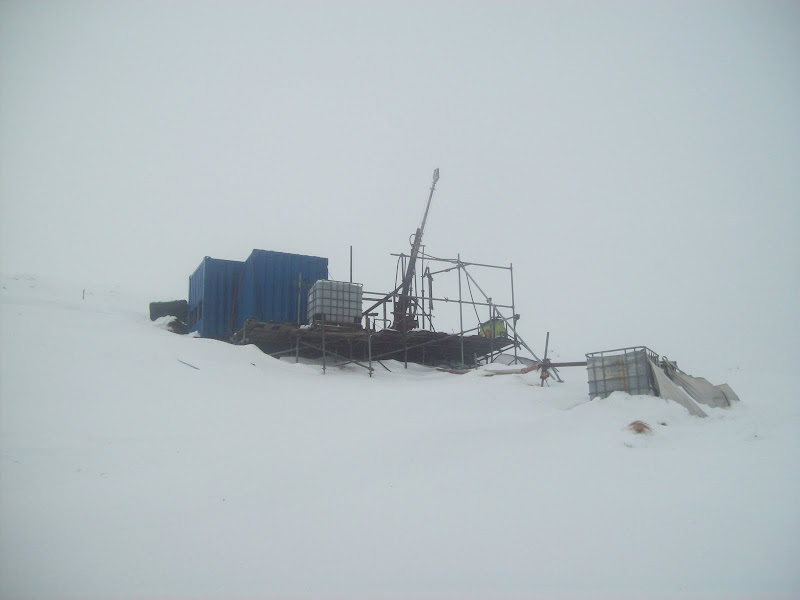 A short distance west along the ridge from this, we decided to head directly for the summit, crossing the Allt Eas Anie. There was plenty of floundering through waist-deep snowdrifts to get to the other side, at which point the gradient steepened again. 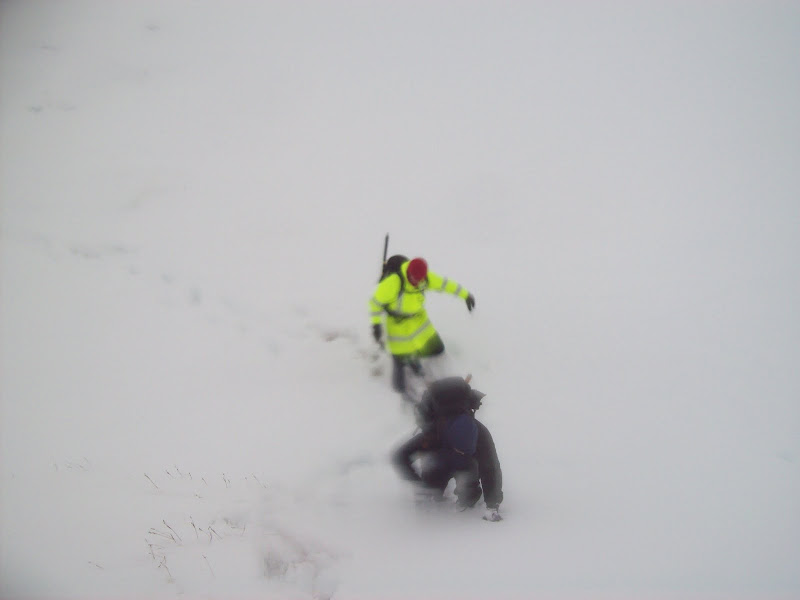 Matt took this opportunity to try out his new crampons and check they fitted, and we floundered onwards towards the summit, sections of easyish walking becoming interspersed with more waist-deep drifts. Up to now there had been little to see, but once we picked up the line of summit cliffs, there were some pretty impressive cornices to look at. 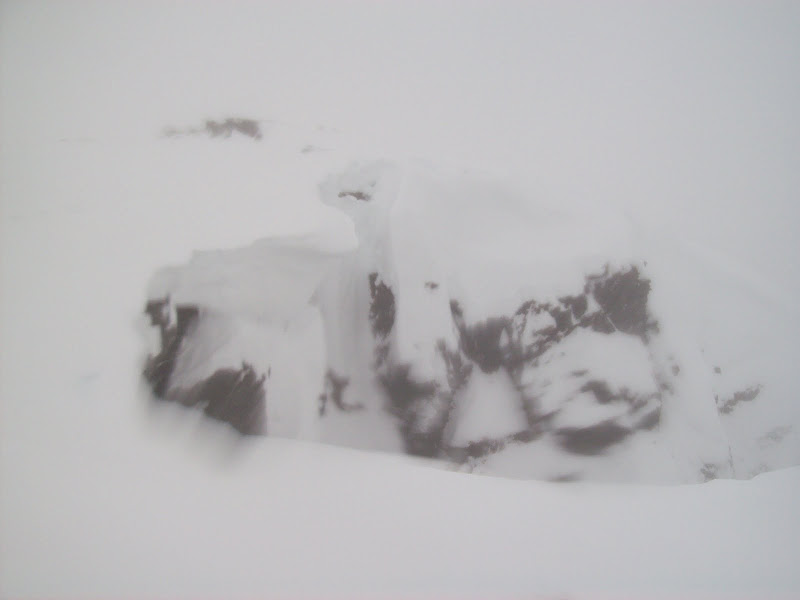 We were almost there now, but the wind was whipping around up here, providing little incentive to stop. Although it was breezy, fortunately it was nowhere near the 50-60mph gusts forecast. After a quick chat, we opted to descend to the east of the summit, lining us up for a potential ascent of Meall Odhar. The way down was steep and exciting, with glimpses of the rock scenery in Coire na Saobhaide. Again there were deep drifts interspersed with easier ground.

Descent to the east: 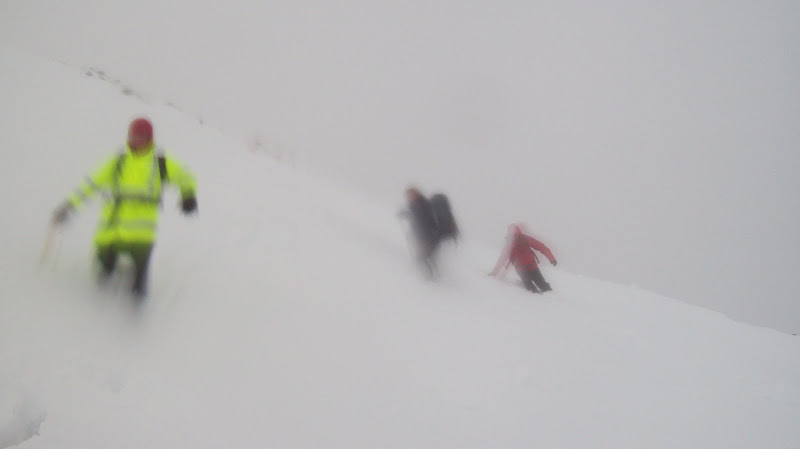 Once we dropped below the cloud, we all decided that Meall Odhar looked uninspiring in the conditions and we would just drop back to Cononish instead. We were also short of time as I was trying to catch the 4:45pm bus back home to Inverness. I didn't mind as I still have a plan to do a full circuit of Glen Cononish from Meall Odhar to Fiarach sometime. 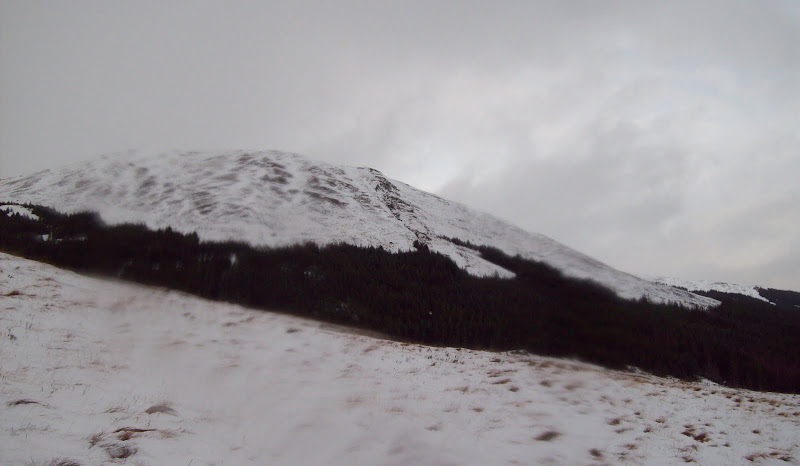 Glen Cononish and a hint of blue sky (soon to disappear): 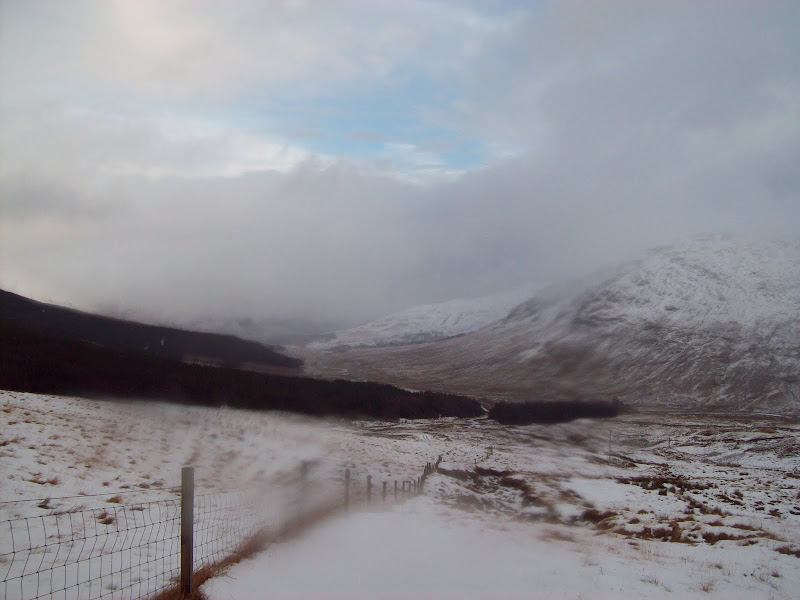 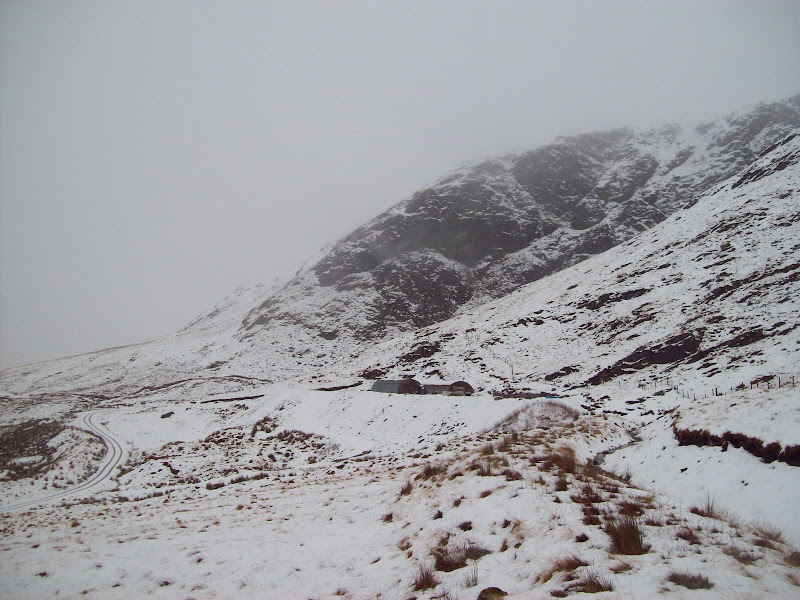 After crossing some rough and sloppy ground, we hit the track to the mine and descended to Cononish. There was the odd hint of better weather on the walk out, but instead of improving, it started to rain lightly. The track was still icy but the deep snow either side of the ruts was softer than the morning, making the walk-out a little tedious.

We finally got back with plenty of time for a shower and cup of tea, before heading back to Paddy's for a quick pint after which I jumped on the bus home (which was also bang on schedule, something I really didn't expect).

Despite the report title and possibly the worst set of photos I have ever included, it was a mostly enjoyable day. The summit crags plus the excitement of the descent, combined with some good company for a change, made for a good walk.

that looked tough going malky - weather wasn't great down here but looks bad up there - ah well, at least the company made it all worthwhile - hope you get better conditions for when you return - cheers

Given the preamble, I am not sure you were destined to be on the hills that day...but nevertheless worked out well. Regarding the pics - au contraire - I think a couple of the pics are quite dramatic ...exactly because they are a bit blurry... eg the summit cliffs one and the cornices.

.........tenuous connections to long dead artists are always a winner

Pity you missed Meall Odhar, i did these two on the day of the royal wedding and coming off Beinn Chuirn was steep enough in the summer far less the winter

I think that type of day is called "character building" or something like that. Well done for persevering

Fudgie wrote:I think that type of day is called "character building" or something like that. Well done for persevering

nah, that was just a walk in the park.....now, if he'd been wearing shorts, well that's character building

Cheers guys - still had the shorts on...under my waterproofs

Will be back for Meall Odhar, although in retrospect we might have got some summit views if we'd done it this time. Couldn't really face any more waist deep snow though.

I have promised myself a half-decent camera once I wreck this one, but it seems pretty resilient. Even filling it with water (like above) doesn't seem to kill it

My god, I thought the photo of you heading over to the Eas was with a floundering black dog. Looked extreme.