The Tarmachan Ridge in 65mph winds and snow

The Tarmachan Ridge in 65mph winds and snow


First at all for everyone who was out hillwalking on Sunday...well done to you

The mountain weather forecast was ...

Enough to keep sane people in their cosy living rooms

. After a renovation project on Saturday, I had made a late decision to head to the hills on Sunday and after reading that Tomsie would be in the area and was also looking for company in the hills, we arranged to meet up to walk the Tarmachan Ridge.

The first obstacle was the drive up to the Lawers car park. The road was icy and I had taken great care to drive carefully. Everything was working fine, until I hit a rather large sheet of ice on the ground, which covered a large part of the road. As soon as my 4 wheels were on the ice, my car had a mind of itself and apart from going up, it started sliding sideways. No no no!

Luckily I had been driving really slowly, so with the help of my break and hand brake managed to stop the car. Unfortunately it was too late, as my car had spun and was facing sideways on the single track road.

A pretty crappy situation, as everything I tried did not made the car move in any other direction, apart from straight down the hill.

I had phoned Tomsie to explain why I was late and he had told me he was on the way down to help. But I was in luck, as shortly after, a lovely couple arrived in their car and helped me to push the car straight again...if you should read this ...thank you again!!

With a delay I finally arrived (after managing to drive half way through the forest) and when I got out of the car, the wind was incredible. Dark clouds were in the horizon and it was pretty cold...so much for the clear sky advertised on the met office.

Moving up the hill was a struggle in the deep snow and long grass underneath it. When we reached the first summit of Meal nan Tarmachan the wind hit us at full force and nearly threw us over. We kneeled down in order to get our cameras out and tried to take some photos. Walking in a straight line afterwards was nearly impossible, we were thrown around like a pair of puppets in the gale force gusts of the wind. A church service would not have been able to to force us down on our knees more often than the wind did that day.
Taking another few photos we walked on and were happy when we reached a slightly sheltered side of the mountain were we stopped and had a quick bite to eat and drink. The wind chill factor was intense and within a few minutes my fingers were painfully cold...time for my ultra warm gloves! (is there any worse pain than the pain when your fingers get warm again??) We packed up and made our way to the next summit, which looks far more impressive than the Munro we just had climbed.

By the time we reached it, we were literally on hands and knees, using our ice axes to climb up it. There was obviously an easier way around it...but why do that when you can have so much fun! We reached the top and had a fantastic view towards the ridge. It was a photo opportunity not to be missed and Tomsie was first to tackle the ridge. By the time it was my turn the wind pushed against me at me with full force. I loved my crampons at that time which kept my feed firmly on the ground. A path to the left showed a single line of footprints, far saver and away from the ridge. But without needing to say a word neither of us wanted to give in and let the wind defeat us. The walk had to be done on the top of the ridge in 65mph winds! Using my ice axe to get more hold, I inched myself further, holding on to everything there was left to hold on, while trying not to be thrown off the ridge. It was madness. . We moved on, being hit by particles of loose ice and snow, which hit us like bullets, making our ski masks worth their weight in gold. I am not sure why but the walk ended up being far less scary than what was due to come...the way down Meall Garbh.

Described as a scramble it looked more like a vertical wall of ice and snow through ice covered rocks. We had not stopped long at the top of Meall Garbh as time was getting on. Looking down the steep path we made our way down the mountain but shortly after the summit the scrambly bit had started. So far I never climbed up or down something soo steep in snow and ice, but the ridge walk had left me with a new found confident. I wanted to get down there. I discussed the route with Tomsie and said I woudl make a start. Checking the route I realized that backwards was the new forward. So turning around I climbed down the hill, using my ice axe to get hold.
It was pretty scary and steep. There were no handholds as everything was covered with a thick layer if ice, so I had to trust my crampons and ice axe fully. By the time I reached a safe area, I looked up only to see Tomsie, who had started to follow me, sliding down the rock face. He managed to catch himself just in time, but it was a heart stopping moment. When he caught up with me, he also said that he thought, he was a gonner. Covered in snow and ice we reached the bottom and by looking up the route we took looked rather crazy, but I was pleased we did it!

The walk up Beinn nan Eachan afterwards was straight forward and easy. We looked towards Creag na Caillich, not sure if that was part of the suggested ridge, Tomsie told me that he had read, that the last decent was pretty serious and after what we just came down, neither of us had any intention of doing something even scarier. So looking around we noticed the steep grassy slope to the left. We discussed if we could climb down the slope and as it was grassy with only the odd rock, feeling confident we agreed to give it a try. The slope ended up being far more steep than we expected. I would love to say that we looked graceful, but the reality looked slightly less elegant as we slid, rolled and tumbled down the hill...but at least we were able to slide down parts of the hill...one great thing about winter climbing!

By the time we reached the car it was dark and the whole walk took us 7.5h A bit longer than expected, but the wide path which covered the last 2 miles of the walk, had made walking in the dark pretty easy (we did not even needed headlights) Although our conversation which went like..."This path feels longer than this morning" , " I think I can see a tree...can you see it" , " I cant see anything it is too dark" did not really make it believable to anyone who might have listed to us. But when I drove back home I had to admit to myself it had been a great experience and for sure my windiest day up the hills so far. Mother of pearl clouds during the morning Head down and up...Tomsie fighting against the wind 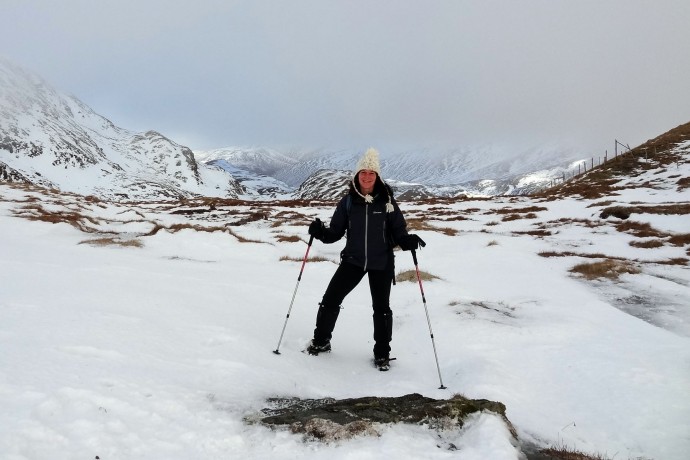 Me close to Meal nan Tarmachan The full walk ahead The way down we took 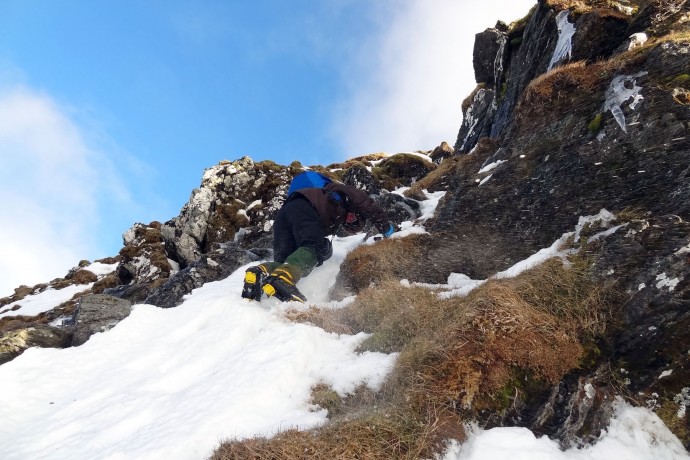 Tomsie on an easy bit 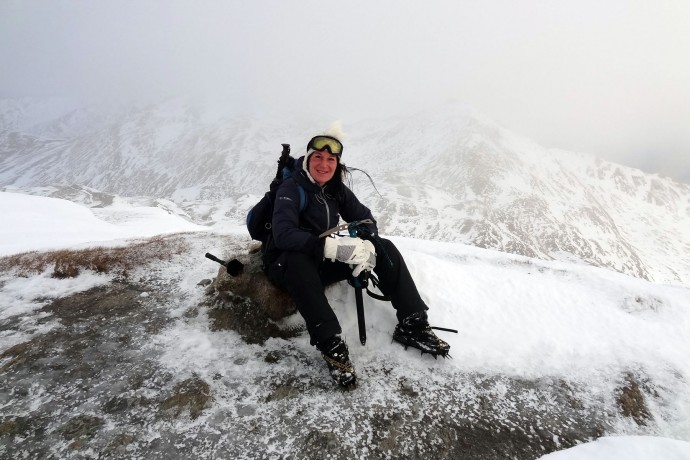 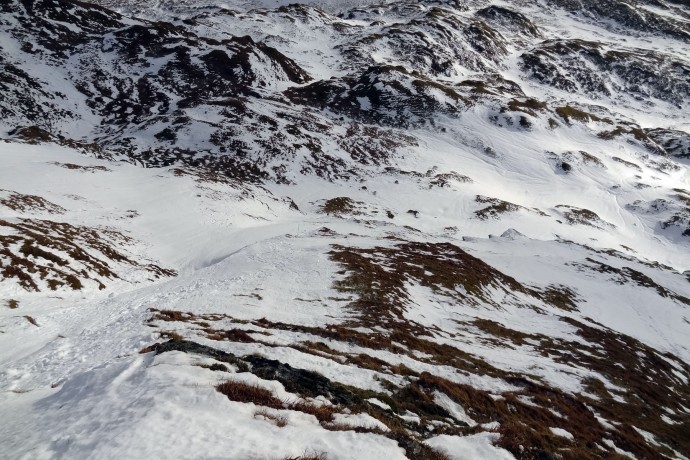 Half way down the last mountain 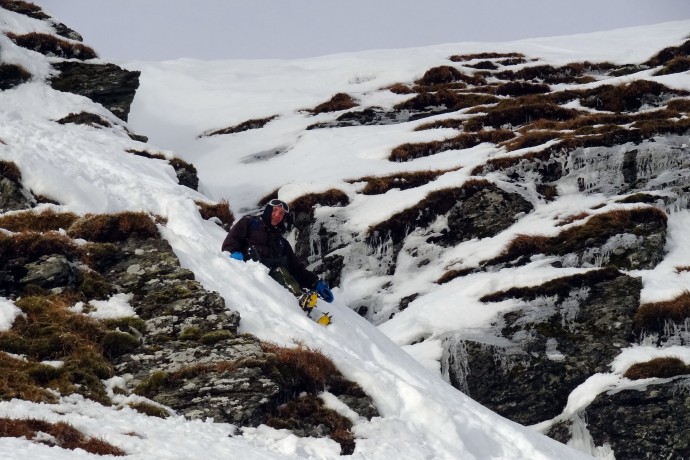 On the way down.. 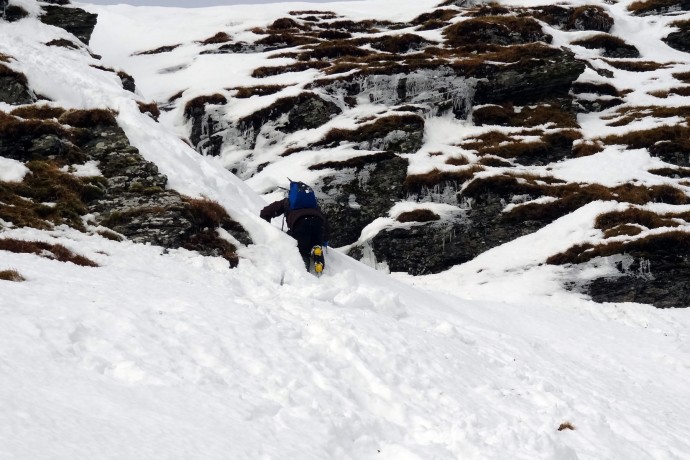 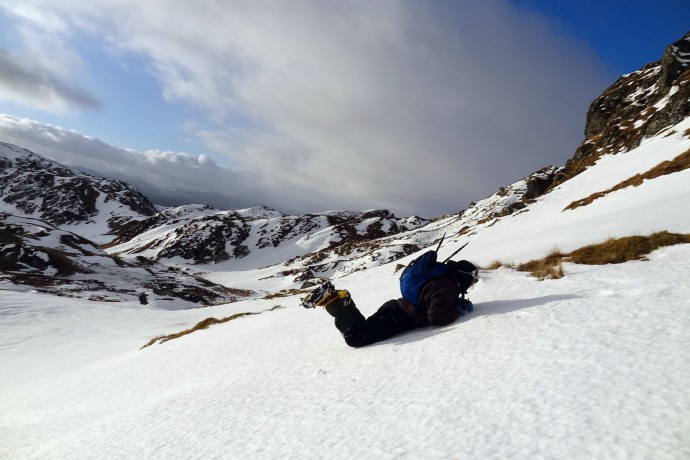 Route we came down...in blue our walk...in pink the suggested one (looked far easier at the end) Well done the pair of you really nice photo's..and the wind was blown hard on the gorms to.

I was over the other side of Glen Lyon and, while it was cold and windy enough for goggles, it sounds like you were bearing the brunt of the winds over on Tarmachan. Close shave

well done on getting out there in some pretty severe winds

This was my first Munro a couple of months back and I must say I enjoyed it immensely, sounds like you two enjoyed it as well even with the challenging conditions, great report and some cracking pics,
I is slightly jealous

You're officially off your nut

Good report ML. Sounds like another one of your adventure walks. Great pictures.

wow!
Well done on getting across the ridge in that weather, it Looks fantastically scary. That wee scramble was tough enough in the wet, can only imagine what it'd be like icy.

well done guys looked like you had harder snow than us in glen dochart, although i think we shared the same wind, we never had to use crampons and axe. Glad you both got safely down , might make us all think to choose safer routes in winter.

Brillant report ML, wasnt expecting it top be up so quick really enjoyed reading, I had that slip under control knew where I was landing 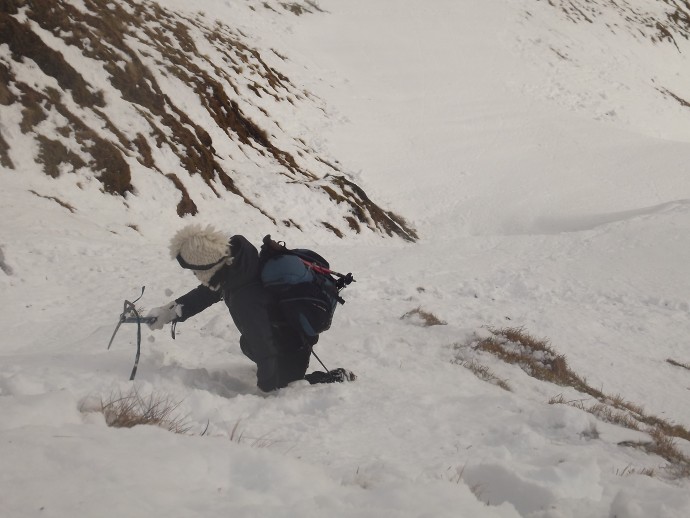 Trying to stand up 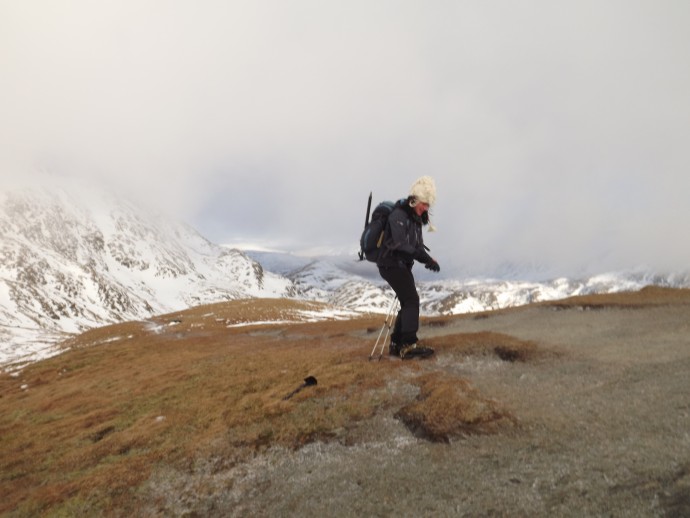 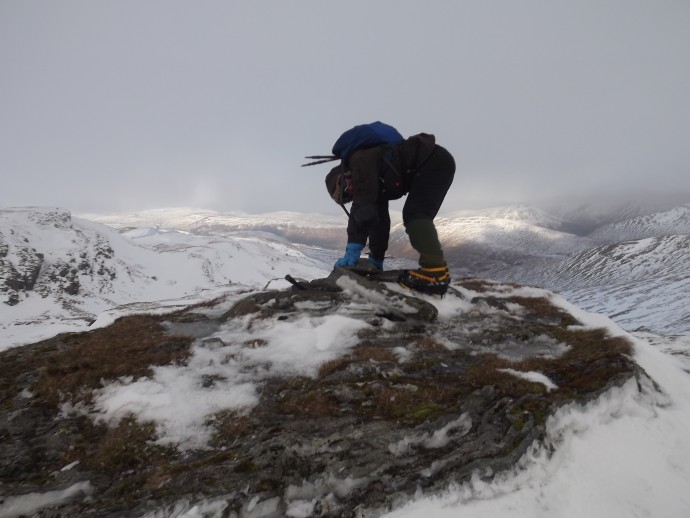 I used to think that you were slightly mad

I must apologise, I now realise I was wrong.

I now know that you are absolutely completely stark raving bonkers

I could feel the pain in my fingers just reading that!

But it was worth it to get those brilliant photos.

Now didn't I warn you about those roads?

Mentalist, but that was some feat, well done

Well done - was thinking of others on the higher peaks. Great effort.