I think the first I heard of the Aonach Eagach was when I phoned Big Jesper about a climb and got a text back from Tenerife, or somewhere, to say "what about the Aonach Eagach, or Ring of Steall?" Little did I know he was jesting, but after having a look at Walk Highlands, I quickly realised the AE was no joke, specially as my head for heights ain't what it used to be.
After a few more months of banter and if's, but's and maybe's, the cards were put on the table and we decided to go for it, weather and nerve permitting, though I insisted on having a rope along with us, not knowing how I might react near the sharp stuff.
Colin and Andy, were willing volunteers to join in and handy to have along, Andrew having been that way before and Colin having the instincts of a mountain goat. The early rendezvous at the Clachaig Inn went without a hitch, though the forecast was borderline for dry and wind free conditions.
I remember Am Bodach being relatively easy and enjoyable, even carrying the rope much of the way (but, planning not to be the one to be carrying it over the rough stuff.) The early morning cloud was still lingering a bit low and broody looking, but off we set across the ridge and as is mentioned, the drop down off Am Bodach is a bit tricky, requiring a bit of manoeuvering, patience, mutual guidance and concentration, but that applies much of the way from there on.
Despite my anxieties, we made reasonable progress, to Meall Dearg, though I made no further offers to carry the rope, feeling I would be the first to need it, if anyone did. It was quite exilarating over some of the pinnacles and other exposed bits, but there was one part, which I can't really describe where, but I think we somehow ended up going too far off route, to avoid going over a tricky looking section. We headed down a slope to the north side of the ridge. It was quite grassy, though looked as though some others had been this way before? Anyway, I didn't like the look of the route Andy went, so followed the other pair, as we nervously nudged our way back up onto the ridge. I think there were better ways to do this bit, but none of us were for going back to check it out.
There was still the Crazy Pinnacles to go over, but once out the way, we were soon at the second Munro, Sgorr nam Fiannaidh. Job done? No, not quite. Don't relax too much once you have crossed the ridge. You still have to get down. I tried to direct the boys attention to the gradual descent down, with warnings of mishaps read in the Clachaig Gully, but they were having none of it. It sure was steep, with constantly moving large, loose scree and boulders to keep the feet nimble and the mind fully concentrated. And, boy did that leave the legas aching once at the bottom and able to focus on other things, than saving oneself from a fall. That said, it was only a moment till the buzz kicked in, with loads of banter about having 'done it!' A great feeling and almost equaled by the delish' pint awaiting in the nearby haven.
As you'll have gathered, the rope wasn't required and it was a shame to have encumbered the lads with carrying it, however ....... And also, just another word of caution to the novice like myself, had it been wet underfoot, I would have not been able to do it, having since found out how slippy it can get on wet rocks!
Some views! I'm sure there is a bit more grey and white there, than before! Ballachulish Bridge and beyond! Jaf at the chimney - I think? I think Am B again? 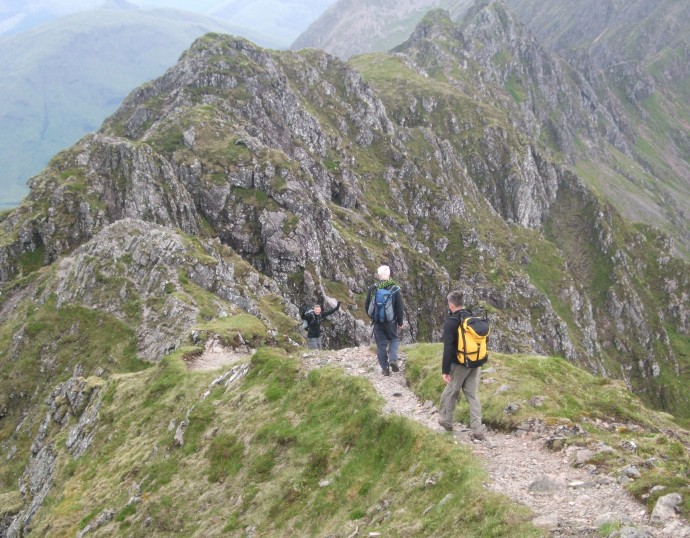 Yes, they even have fences up here! Coming down off Am Bodach Towards the Pass of Glencoe. Big Jesper, Colin the Mountain Goat and Andrew, the Sherpa Gilthorpe.

Congrats on doing the AE Jim, I've got this to look forward to yet

And well done on getting your pals to carry the rope too.

well done, and the pictures are great, some of the best cloe ups i`ve seen of the ridge, cheers

Thanks for comments and good luck when you tackle the ridge. All in all, I'd say it's scary, but not as scary as many make out! (Providing it's dry!)