I get hacked with people saying Chonzie is the least interesting Munro. It’s a cracking wee hill with at least six approaches and if someone walks up in the mist from Invergeldie because they can’t be bothered going further on a wet day it’s their loss. If it comes to the worst hill in the southern highlands for me it’s a relegation face-off between Mhanach and a’ Chleibh but when we’re talking about an unacceptable Munro experience, step forward a’ Bhuideanach Bheag. Carn na Caim is just dull but gets tarred by association.

So how can you get through this gruesome pairing ? Well you can cycle to Sronphadruig Lodge and approach a’ Bhuideanach Bheag from the south east. You can visit the (relatively) handsome top of Glas Mheall Mor on the way in, and the handsome Corbett of An Dun on the way out. The Munro summit is really ugly unless you get it under snow. Carn na Caim is more of a problem. It’s not hideous, if you shifted it to the Pentlands it’d be almost an asset. But if you do it in the baggers’ pairing you only see its dull side.

Well the only other convenient Munro is Meall Chuaich so that’s the one to go with. I went with it a few days ago. I’d been going to do the Loch Lomond Ben Vorlich but friends from Linwood who can look right up the Loch Lomond trench had told me the snow was disappearing. So at 8.45 I left the car aware it could be a race with daylight. The Monadhliath hills were looking stunning in the dawn light as was Ben Alder. No way I was taking off gloves to play with a camera, though.

I made the summit of Meall Cuaich in two hours with that wee smug feeling you get when you beat the Munro book time. There was less snow cover than I expected and I looked enviously at Creag Meagaidh.

The 300 metre descent to the bealach was a skoosh with good firm snow cover to allow giant steps. Softer snow on the steep re-ascent was trickier but there I was, all but 150 metres of the day’s climbing done and short of midday. No worries about nightfall.

To keep up the interest, I was going to visit the Gaick Pass and a sticky out bit called Sgor Dearg which looks good on the map. 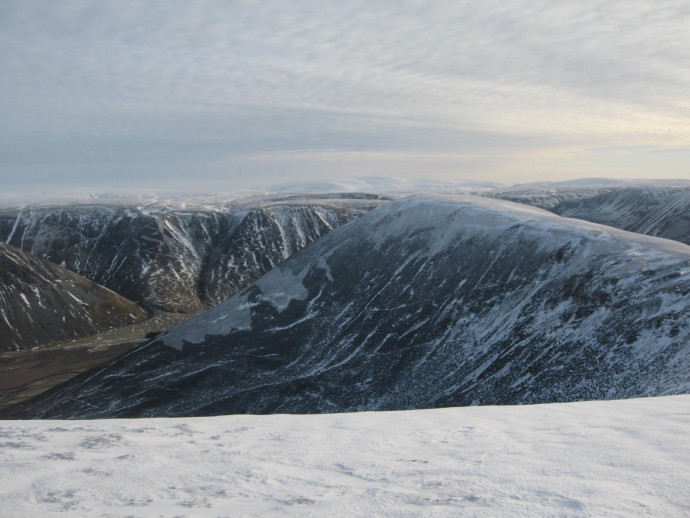 Gaick’s got a few of these odd prominences, An Dun is the best but they all make me wish I’d paid attention in geology. Well the two kilometres across was hard and stumbling work on a treacherous snow surface. Looking down at the Gaick was great. It was the avalanche risk that led to Wade dismissing this as a route for his road and you can see why. Time was now an issue again so I didn’t explore Sgor Dearg but headed back on the long plateau walk to Carn na Caim.

I’ve done this before after a long dry period and if you look at steverabone’s account http://www.walkhighlands.co.uk/Forum/viewtopic.php?f=9&t=23344, you’ll see why dry or frozen are the sensible alternatives to wet. This can be a morass. As it was, after another murderous three kilometre stumble, the snow began to firm up. For the last couple of kilometres, the hill even begins to look quite shapely. I’d set myself a deadline of 2.30 at the summit and I made it by 2.45.

Just time to try and get some water from a frozen bottle then descend. 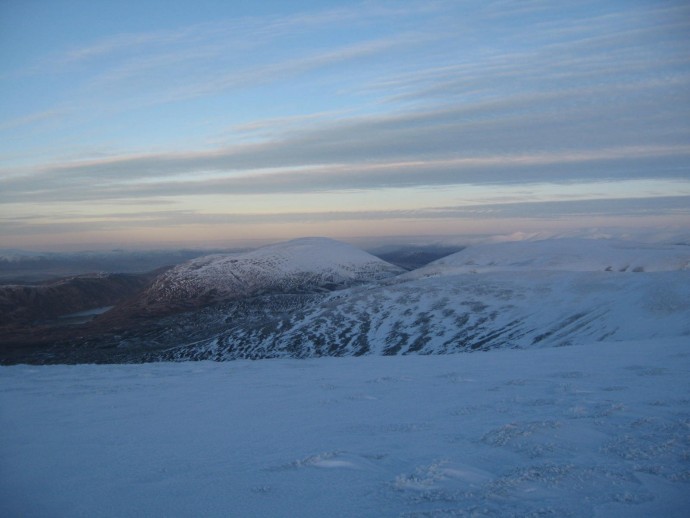 On this descent too, the snow was helpful and I’d reached the car with the last of twilight, my head torch still in my pocket at 4.45. What can you say about this walk? Is it a life changing aesthetic experience? Well, no, though the shifting light gave some fantastic views of the surrounding hills, the Cairngorms, Monadhliadh, Meagaidh, Alder, Beinn a’Ghlo. But it’s a revelation compared with the standard circuit.

Very interesting route! One to file away in the archives for use on an undisclosed future date!