An Caisteal and Beinn a'Chroin.

An Caisteal and Beinn a'Chroin.


Weather looked promising for Saturday so thought i would take the opportunity to tackle An Caisteal and Beinn a'Chroin.

Gear checked and checked again on the Friday and Ice axe and Crampons added to the kit as i was expecting my first
use of these for real.Used Paul's route from this site loaded to my Phone along with my map and compass as back up.
Hats,gloves etc X 3 just in case.

Parked up and set off just before 9am on a very frosty and still morning with fog all around.I won't describe the route
up as it has been detailed many time so just some pictures with comments where required. Setting out under the railway bridge.Fog and frost with thankfully mostly frozen ground.

The route up is straightforward just heading uphill to Sron Gharbh and then follow the path to the
summit of An Caisteal whilst admiring the views and crunching over the frozen patches of snow on the way. 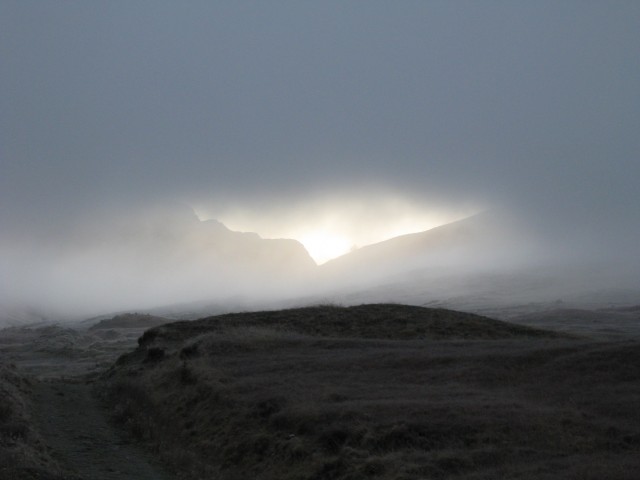 Heading out of the gloom i hope. creeping up out of the fog.

The views started to open up and were terrific. First views of An Caisteal Always take a look behind you,you don't know what you could miss. The fog rolling up and over Beinn Chabhair was a warning of what was to come. Nearly there,the path was mostly clear and where it wasn't the snow was solid with good footprints to get purchase in. The money shot,with i think Ben Lomond sticking it's head up. My first Broken Spectre and the weather was just closing in. It was now a wee bit chilly on top.

I got chatting to a father and son and we were debating whether to carry on to Beinn a'Chroin or head back,it was
a sort of collective decision to carry on and off we went into the murk. Visibility varied between 20 to 100 yds at this point but the path was relatively easy to follow.

The path upwards to a'chroin was relatively straightforward until you reach a steep section which i would describe as exposed,if a 300ft drop is the description of exposed, and adding a small section needing hand/knee/foot
coordination i would call it a "Bowel Loosener" in Saturdays conditions.
Negotiated that without my bowels loosening,i may add, and headed up to the 1st summit into a biting wind and with
our clothes covered in a layer of ice.

I headed for the second summit but my companions had enough at this point and headed down. The 940m lower summit of Beinn a Chroin

The walk out was great,particularly with the ground being frozen,i can imagine it is a mudfest normally.

The cold air was lying in glen beside the river Falloch and looked strange where the white frostline could be seen. Back to the car and a terrific sunset to complete the day. I had a great day and was now absolutely knackered,looking forward to a quick stop at Inveruglas for a couple of
rolls with bacon and listen to the footie on the way home.Only fly in the ointment,stopped serving hot food just
before i arrived,bugger.Banana and an apple it is then with my tea.

I am relatively knew to this lark but after my last 2 Munro's i would not think about going up any of these hills at this time of year without an ice axe and crampons.You don't know what conditions you will meet up top.

You mention potential first use of ice axe/crampons but I'm just curious whether anyone's showed you how to use them or you've done a course or anything? I've done quite a bit of reading up on winter skills and got the MCoS winter dvd but wondering if I'm best to do a course somewhere before I hit the hills with these tools.

No,same as yourself watched dvd's and youtube demo's.Cost of one of the courses is prohibitive right
now but i would love to go on one.I did actually have a play on the Beinn a Chroin slopes before descending on
Saturday.There were a couple of short steep areas with flat bottoms and good snow coverage where i tried a couple
of arrests with the ice axe which i think went ok.It stopped me anyway.

Thanks David. I think I might just take the plunge and get the kit and self-practice. Maybe see about the courses at Glenmore lodge or get the private guide that I used for navigation to take me out for the day. Was going to wait 'til next year before venturing out in winter but I'm getting bored sitting at home when you lot are all out playing in the snow!

Your moneyshot is fantastic! That is the view I was desperate for, but did not clear up just enough to get that. The lower glen inversion was nice but I really wanted to see the proper upper inversion in all it's glory.

Also the sunset is cracking. Just like my one it reminded me of Lord of the rings and Mount Doom

Thanks Milesy.Another 10 minute delay in getting to the top of An Caisteal and i would have missed all the views.

I missed this one, superb photos of the inversion, spectre and sunset. So upset that it has all gone claggy now

David, I finally got myself logged in to this site to say great report on the two hills which, I think, we climbed on the same day. You certainly had the better of the views from the top of the Castle. It was a grand day out though!

It was indeed a great day,can't wait to get back out.Hopefully i can get out again this week.

Welcome to the site as well,it is terrific.

Hmmm - I kept hearing that climb up the crags to Beinn a' Chroin was okay but now you've got me worried... do you think it was just the conditions or would it be pretty horrid and exposed on grass do you think?

Anyone got any pics of the craggy climb up Beinn a' Chroin from A Caisteal?

I think the fact that there was ICE on the rock and the weather had closed in made it a bit more
difficult than maybe a summer months climb.I am a lot more inexperienced than yourself so maybe
my perception of exposed is a bit different to others.

Yeah, after seeing the pics on the other post I'm definitely leaving it for a non snowy/icy day!