The weather was too good not to get out on the hills so due to my poor navigational skills i picked a mountain that my friend had recommended as he said it would be impossible to get lost! Well i managed to prove him wrong

after working my way along the track that was more like an ice rink i started my ascent, thankfully it was very frosty so no boggy bits for me! somehow half way up i managed to lose the path (this happens alot with me) however after trudging through the snow i finally stumbled across the path....quite literally! the weather was perfect and the views were stunning and made my way to the cairn with no major difficulties. However walking towards the cairn i was greeted by a man wielding a shotgun

which was somewhat unsettling to say the least but he was nice enough to take a pic of me so all was forgiven for scaring the hell out of me. i started my descent, this time sticking to the path! The sound of gunshots made my descent a quick one!!! me at the cairn with a shotgun! 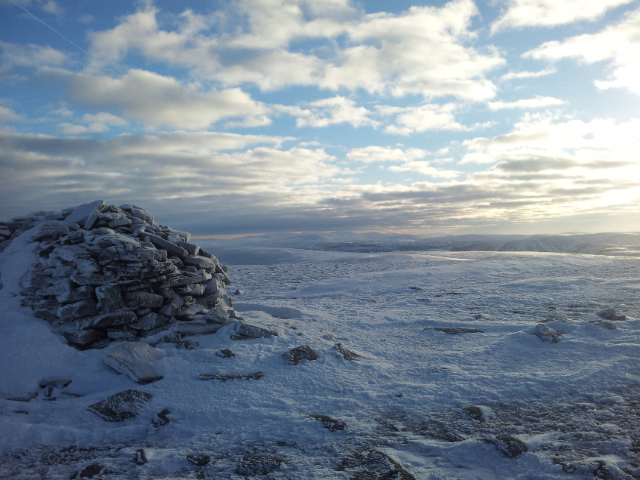 Well done on finally putting a report up

Sounds like you met one of the Chuaich estate keepers on the summit area.

They are tough boys but are very welcoming and friendly. Most of their grouse 'drives' start up in the high coires on the North side of the ground between Carn na Caim and Meall Chuaich. They knocked me into shape during the grouse beating this autumn.

Are you sure that's Meall Chuaich your on??????

Nice first report and photos , if you were only lost for ten minutes that doesn't count

Charlie's got competition with the photography, nice one

Frigate wrote:Charlie's got competition with the photography, nice one

thanks kev but scary shotgun man deserves some credit too

Gavin99 wrote:Nice first report and photos , if you were only lost for ten minutes that doesn't count

I like that theory! in that case i have never gotten lost!!!

I promise to do the next report, that way i can put right these rumours that you always do the hard work trudging through the snow at the front......all lies!

Ah, so that's what the views are like! We did this yesterday and it was cloudy at the top so no views

Looks like you had a lovely day for it.

yeah the weather was pretty perfect. I was also up at drumochter on saturday....2 munros and not a single view!!!