We set off from The Spittal of Glenmuick car park in glorious sunshine over the bridge & past the rangers hut to a split in the path, turning right we headed up the path towards the house,we went around the house & through the forest before rejoining the path & following it uphill towards the foot of Conachcraig [corbett], we decided to cut up through the heather & add this to our day as well,returning back through the heather to the highest point on the bealach between Glen Muick & Glen Gelder where a cairn marks the start of the path W towards Lochnagar, the path leads up to a bealach between Lochnagar & Meikle pap [top],
from here its a steep climb up The Ladder to the cairn @ Cac Carn Mor before heading N 500m to Lochnagars summit Cac Carn Beag.
We then headed back towards Cac Carn Mor but before reaching it headed along a path turning right dropping down to an extremely wet bealach before climbing quite steeply & heading N, as the path starts to
pull away from the edge you leave it & bear SW onto more level ground & follow a faint path to Carn a' Choire Boidheachs small cairn or White Mounth as it is also known,
W next dropping down quite steeply until the path eases & you follow the burn SW before crossing it & following a path along some old fence posts running down from the bealach between
Carn an t-Sagairt Beag & Carn an t-Sagairt Mor,on the way up through the heather to the summit we encountered some plane wreckage from an old Canberra that had crashed back in 1956,had to have a pix taken here before heading up to the summit & its two cairns,we were'nt sure which waswas which so took no chances & went to both.From here we headed downhill SE along the path towards Cairn Bannoch crossing the wide bealach before clambering up some boulders to reach the summit,from here we headed downhill SE before reaching the bealach with its 3 summits & following an easy path before climbing up some large boulders to reach the cairn @ Broad cairn, great views here, a spot of lunch & a much needed change of socks before the very long walk back along Loch Muick towards the carpark @ The Spittal of Glenmuick, this seemed like the longest walk ever after completing the 5 Munros, oh & the Corbett,
the seemingly never ending path going on & on & the sun beating down on me!, i can tell you i was absoloutely knackered when i reached the car, looking back on it now it was a great day but OMG! that was some walk back to the car! Loch Muick with Lochnagars hills behind 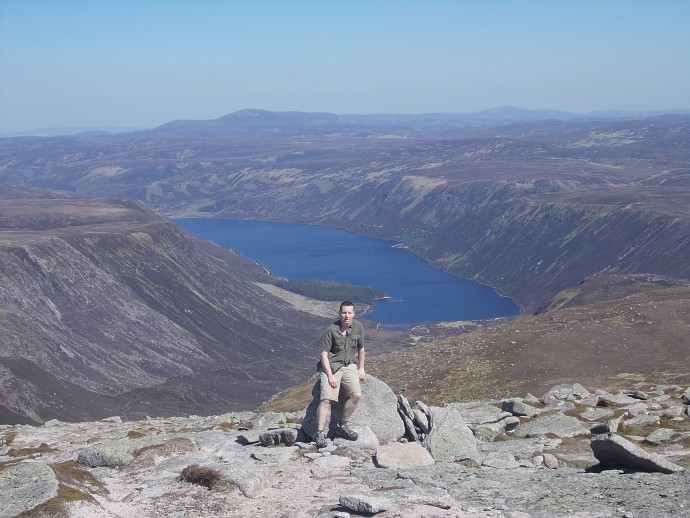 Made it up the ladder to Cac carn Mor, the Black Spout & Cac Carn Beag behind me on the cairn @ Conachcraig with Lochnagar behind me Never seen as many deer in the one place Craig leading the way [for a change]