Back in the September of 2006 Hazel and I climbed our second ‘Torridian Giant’, Beinn Alligin. On the summit of Sgurr Mor, our second Munro of the day, looking out towards the Shieldaig and Flowerdale Forests, we saw the impressive mountain masses of Baosbheinn and Beinn an Eoin, and immediately added these to our ‘must climb list’.

It took a few years, but during a welcome week’s break in Badachro, Thursday 19th March 2009 to be precise (a couple of days after a memorable day climbing Quinag) we parked at a small parking area, by a green shed, on the A832 West of Loch Maree (GR: 856721) where there was the beginning of a signposted well laid track.

We followed this easy undulating track for approximately 5 kilometres to the stepping stones across the Abhainn Loch na h-Oidhche, from where we headed directly towards the North West buttress of Beinn an Eoin. We picked a path avoiding the buttress to reach the main ridge, where we traversed over 3 minor tops before the final stiff ascent to the summit, reached in approximately 4 hours. We were rewarded with great views over the central Torridian group and an eagle flying below us. 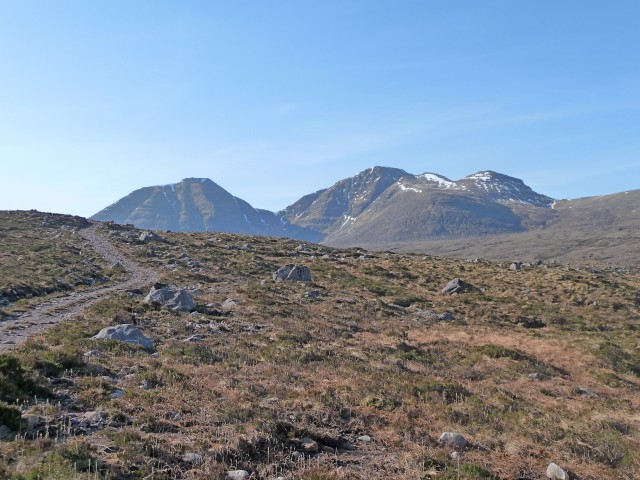 Boasbheinn from just after the crossing of the Abhainn Loch na h-Oidhche. 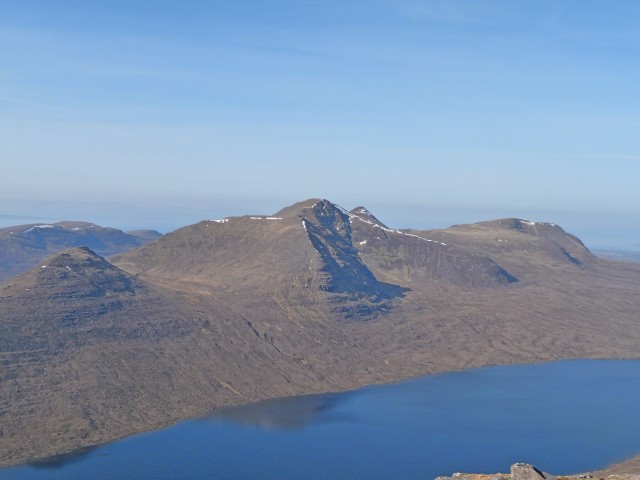 Boasbheinn from Beinn an Eoin, Loch na h-Oidhche in the foreground. 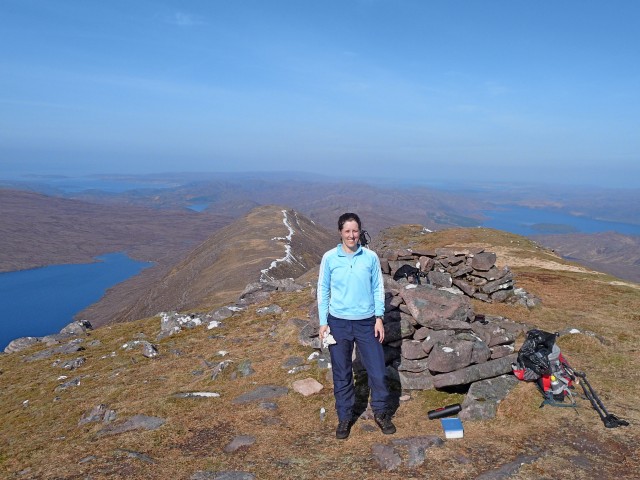 Hazel at the summit cairn of Beinn an Eoin, the ridge in the background.

From the summit we continued along the ridge South, picking our way through the boulders, before descending very steeply almost directly West to the Bothy of Poca Buidhe. 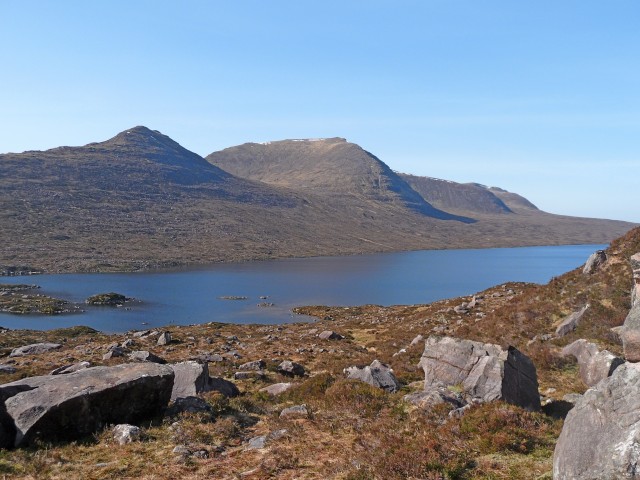 Boasbheinn from just before the Bothy of Poca Buidhe.

The Bothy provided a welcome rest, although a previous party must have had a fine evening judging from the empty cans of Carling strewn around ….. inside and out! After a quick clear-up I decided that a spot of light refreshment was in order and ‘sampled’ a can for myself ….. a small reward for said clear-up! 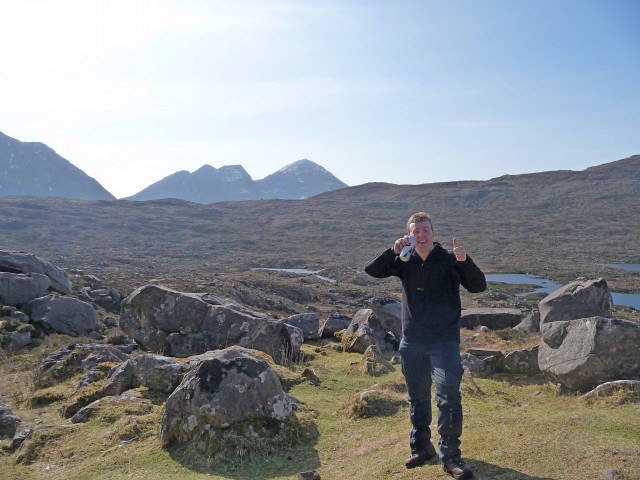 The Bothy of Poca Buidhe, the Horns of Alligin and Sgurr Mor in the background.

Refreshed, we headed South West from the Bothy then West between a number of small Lochans to gain the South West ridge of Baosbheinn. 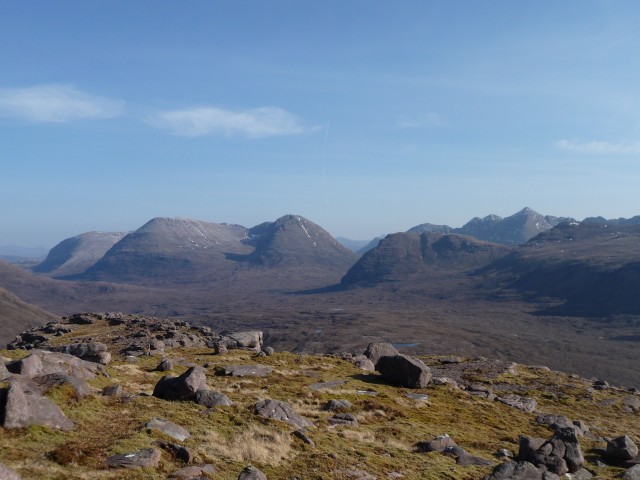 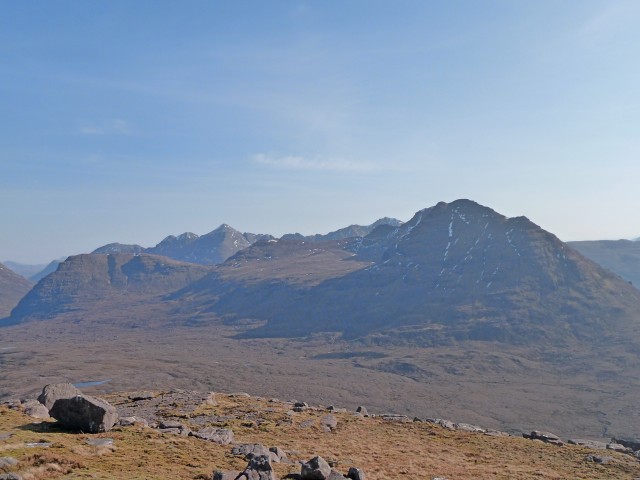 Liathach, Beinn Dearg from the South West ridge of Baosbheinn.

We followed the ridge over 2 minor tops before making the final steep ascent to the summit (Sgorr Dubh), reached in approximately 6 hours 30 minutes. We were rewarded with an RAF flyby, Tornado's I think ….. I wasn’t quick enough to get a photograph. 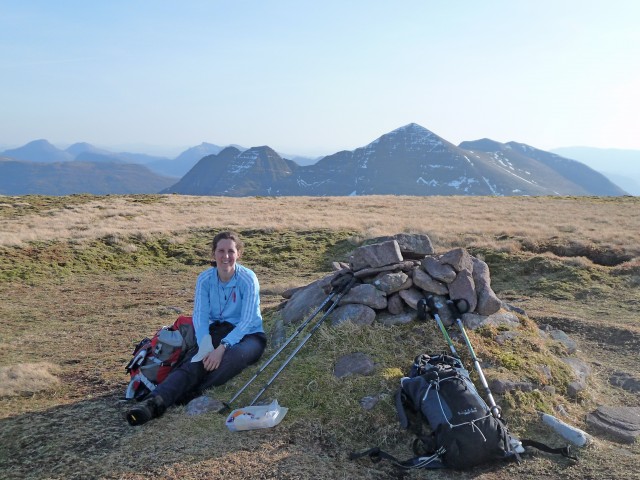 Hazel at the summit cairn of Baosbheinn, Beinn Alligin in the background. 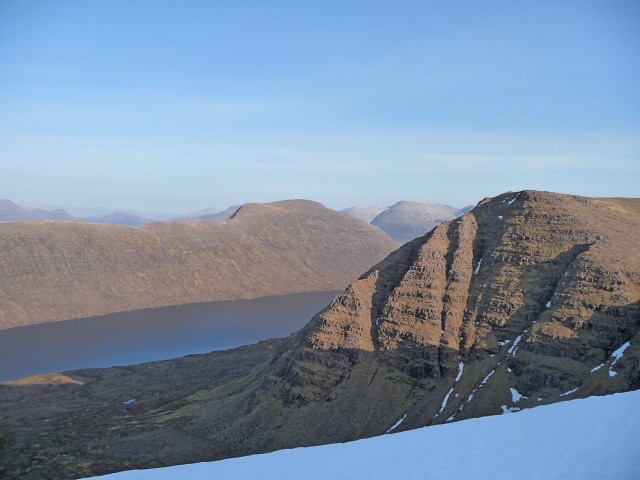 Beinn an Eoin from the summit of Baosbheinn.

Continuing along the main ridge, we reached a col from where we descended the North East spur, heading left lower down into An Reidh-choire.

On reaching Abhainn Loch na h-Oidhche, we followed the river to a footbridge from where we regained the well laid track and continued the long haul back to the small parking area. 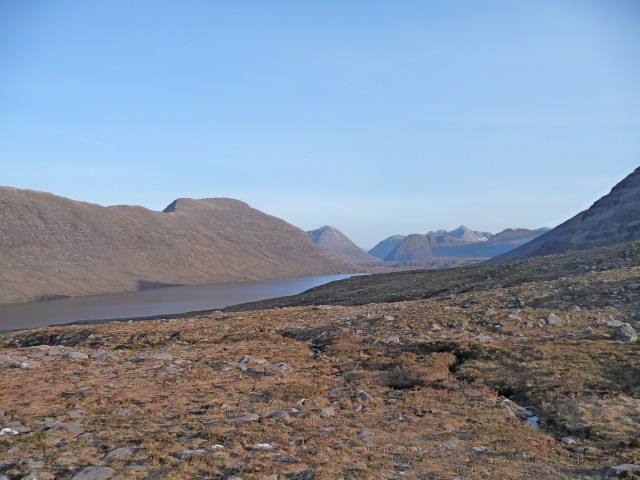 The view along Loch na h-Oidhche. 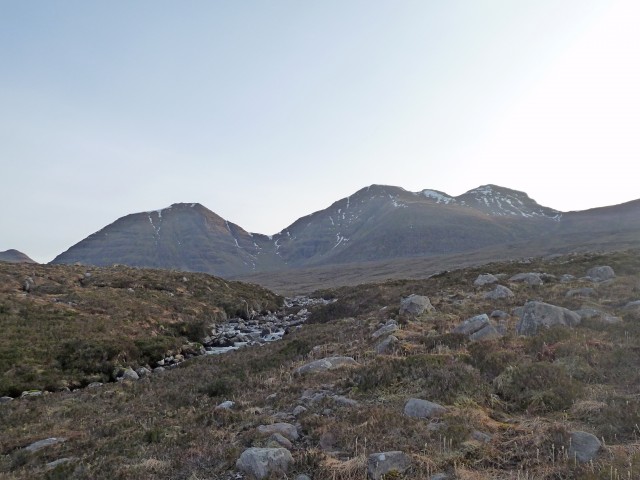 In total we where approximately 9 hours on the mountain covering just over 23km. A fantastic day's hiking, magnificent scenery, fabulous weather and topped off with a few pints and a fine meal back at the Badachro Inn. It can't get much better than this! 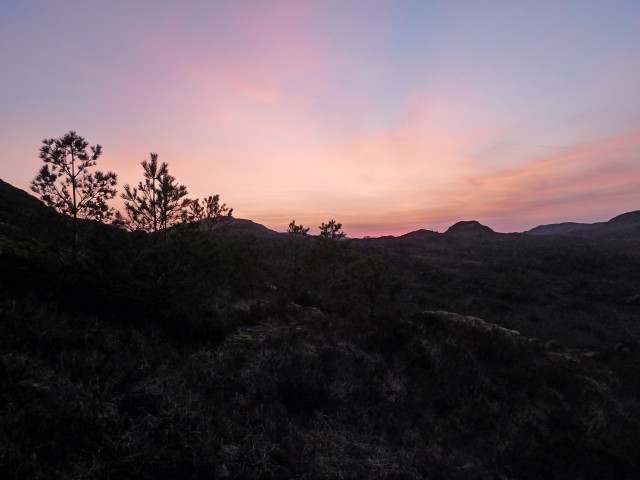 Great report and photos, especially the last one... How difficult are the hills, say for mountain cowards? It looks a beautiful area and a great track to them...

MC, Baosbheinn is fine for cowards

I've not done the other one yet though.

really enjoyed reading that report and loved looking over the pictures, stunning area on a stunning day

MC; it's a great track in and a nice easy start to the day. Both hills are fine for MC's with well defined ridges, the descent off Beinn an Eoin was the trickiest (quite steep) and that was only because I was recovering from a knee cartilage operation! Either hill would be a fine days outing with great views over the 'Torridian Giants'. We were the only people on those hills on this day and loved the splendid isolation of their location, well worth an outing.

Hello,
These two hills give one of the really memorable days out in the North. Especially the views of the rear sides of some of the Torridon giants. The image of the bothy at Poca Buidhe give some idea of the terrain on descent from Beinn an Eoin which was a fairly direct route from the summit. However looking at the image maybe retracing a little ground from the top would give less bouldery stuff to reach the bothy. The image came from old format film and was scanned into digital. From what I remember of the refuge it seemed to be open partly to hillfolks....that was in 2005. 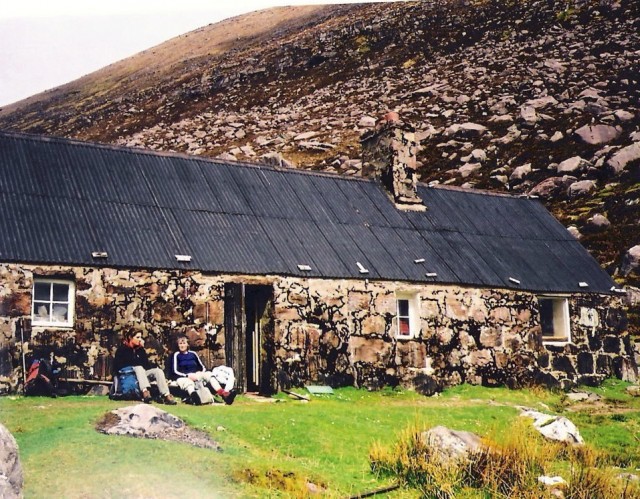 Can you tell me what you had to do to get karma to provide weather like that?! looks like yous had a great day!

The last two years in March we have stayed for a week in Badachro as our base and had at least three cracking walking days.

Okay thanks for the encouragement everyone... That bothy looks nice!

May not have been done this weekend, but the last few days seems to have an avalanche of top class reports! Yet more hills that I want to do but haven't got round to!

Darran wrote:a previous party must have had a fine evening judging from the empty cans of Carling strewn around ….. inside and out!

Looks nice, but sounds like it is frequented by less than good company...

The main part of it is certainly kept locked....

Yes, the main part was locked and looked very nice inside.