First footing on the Correen Hills

First footing on the Correen Hills


New Years Day, bright and cold - just superb for first footing a couple of hills. A bit of a cheat this, as by adding 20 minutes walk to and from the start at Terpersie I did the walk from my front door

Looking up from the Esset Burn towards the quarry on Contlach Shank. The track follows up towards the trees.

It's a steady climb rather than steep and the going is good on a grassy track. Looking back from near the quarry towards Terpersie with Manabattock Hill on the right.

The quarry workings are quite sizeable, and really you only appreciate the scale of the spoil heaps from a distance. In the main quarry is a small wooden bothy. It's not completely wind or watertight, but does keep the weather off for a lunch stop. I've slept in a lot worse too!

The quarry buildings were clearly more substantial than a wooden hut at some point. Ahead is the ridgeline forming Badingair Hill.

The route from the quarry up to Contlach Shank is very easy going on a mossy track. A nice sight along here was a close view of a Snow Bunting, not common locally, but occasionally seen down at home in Tullynessle too in the winter. I left out the right hand end ot the ridge (Peter's Prop) in order that I could go at a steady pace and not have to belt along.

All along this exposed, broad ridge the northwesterly wind was strong, and spitting volleys of hail and snow. Beyond the rainbow is the distinctive outline of Tap o' Noth with its Pictish hillfort.

A Parish and Constituency boundary follows part of the ridge over Badingair Hill; the markers bear an incised letter "C" on one side and a "D" on the other - I really must work out what these represent....

On to the next "first foot" - Brux Hill; though there's only a 30 metre drop and reascent. The trees up close to the summit show clearly which way the wind blows!

From Brux Hill, the day's high point, Lord Arthur's Hill, looks a long way but again the going is really easy and the distance just reels away; a feature of the Correen Hills as a whole.

A last look back into the wind at Tap o' Noth before turning south east and downwind. All the photos taken facing the wind today were impossible to compose as the tears were streaming from my eyes in the tearing wind on the ridge - thankfully the cropping tool in Lightroom is very good!

After lunch in the lee of Logie Wood, I pushed on towards Lord Arthur's Hill. the view down over Tullynessle was fine with Bennachie and Millstone Hill as a backdrop.

Looking over the way I'd come towards Contlach Shank and the quarry - the lines of grouse butts can also be made out. 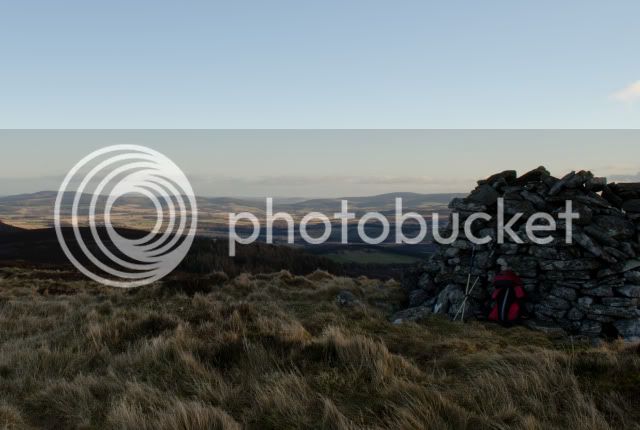 I'd been the first foot on three hills, but not on Lord Arthur's Hill; a couple were descending towards Fouchie Shank as I made my way onto the summit - but first, second or any number it was still a very fine way to spend a Ne'er Day! The view is over the Howe of Alford.

Most folk will, I guess, head back to Terpersie via the Fouchie Shank which is direct and a good descent. But there's an alternative which keeps height for a bit longer and goes through a really pleasant wood. Continue from Lord Arthur's Hill south east over Black Hill and pick up a grassy track leading to Manabattock Hill. The track turns to the north of the hill and goes through a pleasant wood. Walk quietly here as it's a favourite spot for close-up views of Roe Deer. The path emerges from the wood and goes downhill quite steeply to the wood above Dubston and so back to the start.

Not quite for me though - another 20 minutes or so to home. A lovely way to get the year underway!

Wow, that's quite an expedition for the 1st Jan! You did better than us

Lovely photos, we are so lucky to live in such a beautiful part of the world. Looks like a great walk and I'll save this one onto my 'to do' list for 2013.

It was a steady day really, there are longer altrnatives on the Correen Hills but this one was perfect. I count my blessings every day that we have all this available!

Have they tidied up the inside of the "shed"? Wasn't in very good condition when we went inside, ahem...

Well,it was free of rubbish and, under the circumstances, pretty dry....

Given the construction is quite erm, flimsy for the site it's amazing that the place is still upright. Good to see that it hasn't been vandalised too. There are worse about!

Ian Johnston wrote:Well,it was free of rubbish and, under the circumstances, pretty dry....

Given the construction is quite erm, flimsy for the site it's amazing that the place is still upright. Good to see that it hasn't been vandalised too. There are worse kabout!

We got out of there pretty quickly when we went there. Creepy place...