Was hoping to head down to the Cairngorms today to get the best of the weather, but I didn't get up early enough. Still, having done no Munros in 2012 I decided to start the year high with another ascent of Ben Wyvis. My last visit had been a roundabout route from Loch Glass which is probably the best route on the whole range. I was unlikely to top that today, but decided it was time to investigate another non-tourist path route up. The trouble with Wyvis is it is protected on most sides by miles of peat hags and forestry. My time spent on the lower hills paid off here, as I tend to end up crossing this sort of ground as a matter of course these days, and it is no longer offputting.

Wyvis.gpx Open full screen  NB: Walkhighlands is not responsible for the accuracy of gpx files in users posts
I had been looking at a route from near Dingwall for some time now, as it would ascend the slopes that are visible from my house. At 18 miles away, this approach would also make it my closest Munro. I was going to take the train and walk right from the centre of Dingwall but managed to get the car at the last minute, allowing me to drive right up to the Heights of Dochcarty. This saved a good couple of miles and 200m of ascent. There was parking for 3 or 4 cars at the start of my path, but no one else there. While it was a bit grey, it was at least calm and clear. The summit looked deceptively close, even though it was about 5 miles away.

Parking space looking back towards Dingwall:

A good vehicle track led up towards Cioch Mhor, crossing the Abhainn Sgitheach by stepping stones. A couple of mountain bikers passed me heading down, the only other people I spoke to all day.

Stepping stones over the Sgitheach: 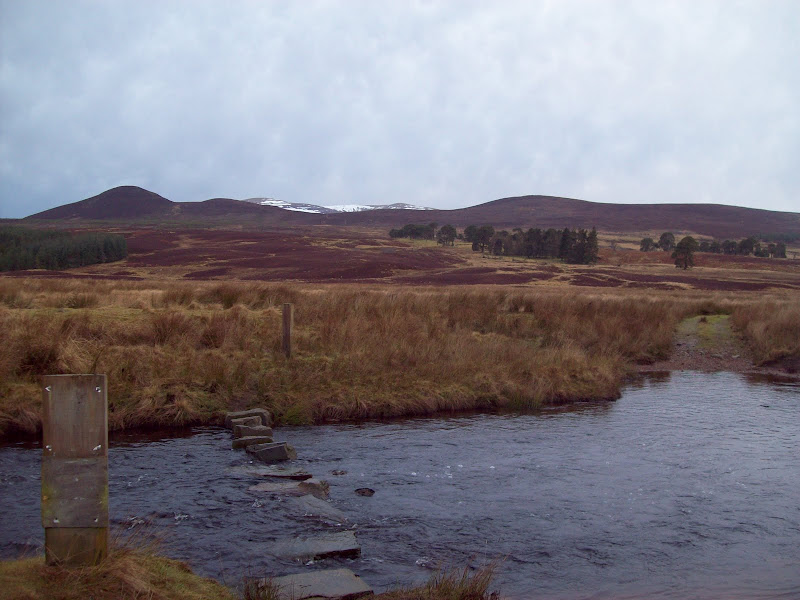 As I gained height, the remains of the good weather was visible over the Cairngorms, with most other directions looking grey. Cioch Mhor looked like a worthwhile little hill - I decided that I would do it on the way back if I had time. It is very prominent from the south, particularly when the cloud is down over the main Glas Leathad Mor plateau.

South to the Cairngorms: 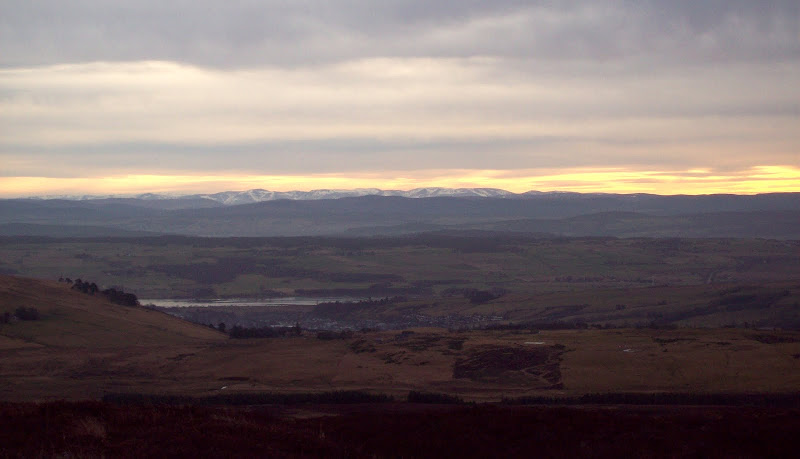 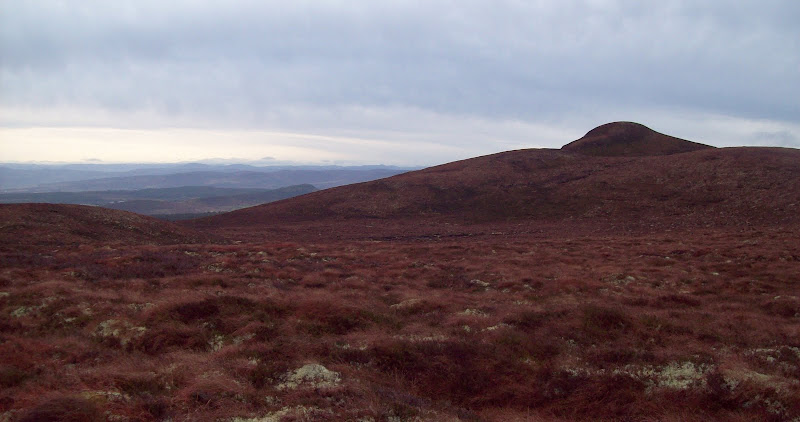 On the far side of Cioch Mhor, the good track dscended and ended at the forest edge, continuing as a series of boggy ruts. The next section was roughest, and probably the main reason that this isn't a popular route to Wyvis. Once across the stream, I followed up a broad fire break and left the trees. The hardest ground was between the trees and the enclosing deer fence, where the ground had been ploughed for conifer plantation but none had been planted.

Getting closer to Wyvis: 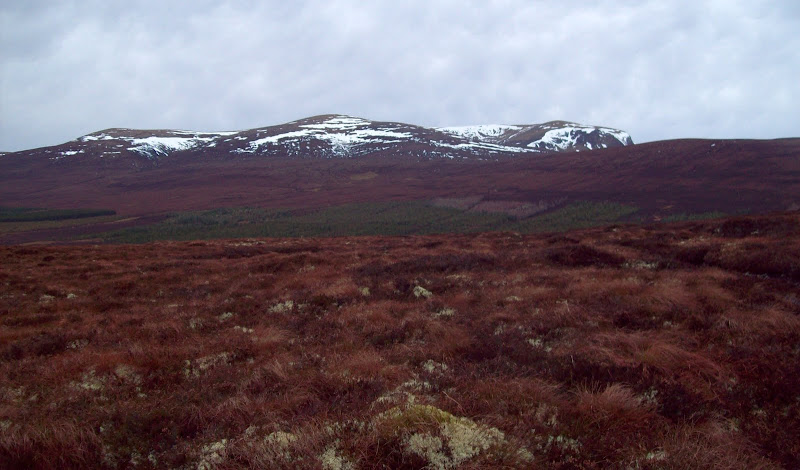 The fence was a little awkward to climb as is was quite old and leaning over erratically, but once over, the ground was merely deep heather. I contoured around Meall na Speirig to a shallow and haggy col. I was finally at the foot of the mountain proper. I fancied a vaguely circular route, so contoured further (with some ascent and descent) until I was in the mouth of Coire na Feola. Not the neatest way in, but much shorter than following the Allt nan Caorach up from Glen Glass.

An t-Socach and Coire Mor: 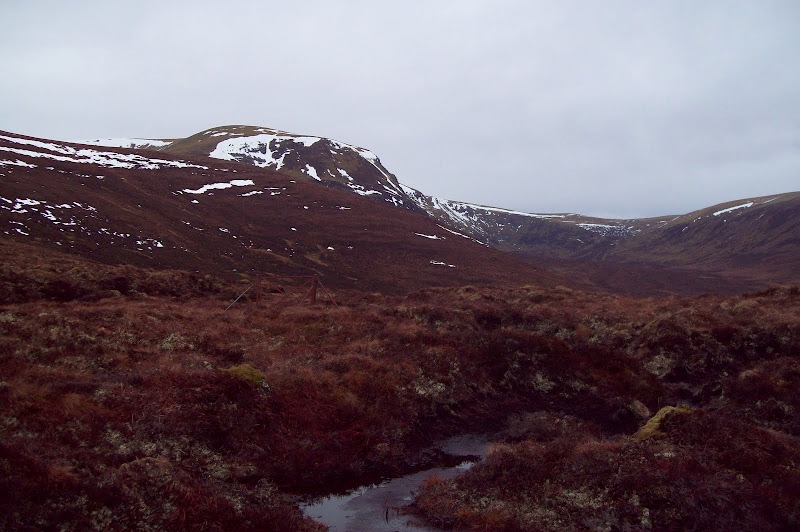 Cromarty Firth and beyond: 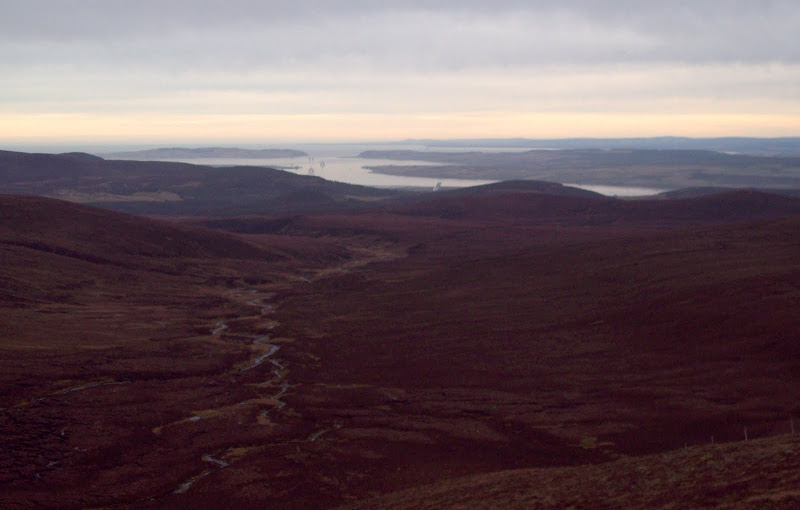 In my way into the corrie, I caught a glimpse of Loch a Choire Mhor. I still intend to walk right in to this spot at some point, but the route is long and haggy. For now I was happy enough with my own remote corrie. Finally hitting some proper ascent, I went up the nose of An t-Socach, sticking as close to the edge of the crumbly cliffs as possible. Above 600m, the going was much better, finally turning to easy grassy plateau at 900m.

An t-Socach again. My route went up the left hand side: 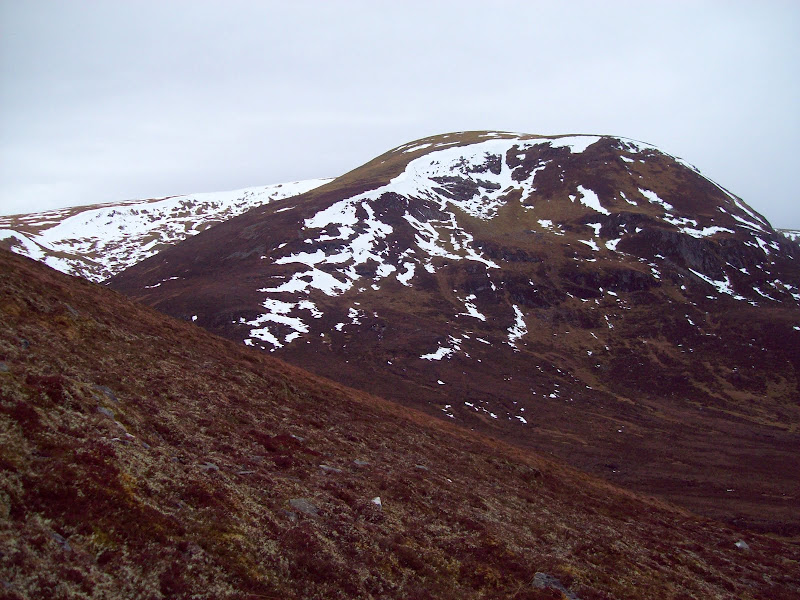 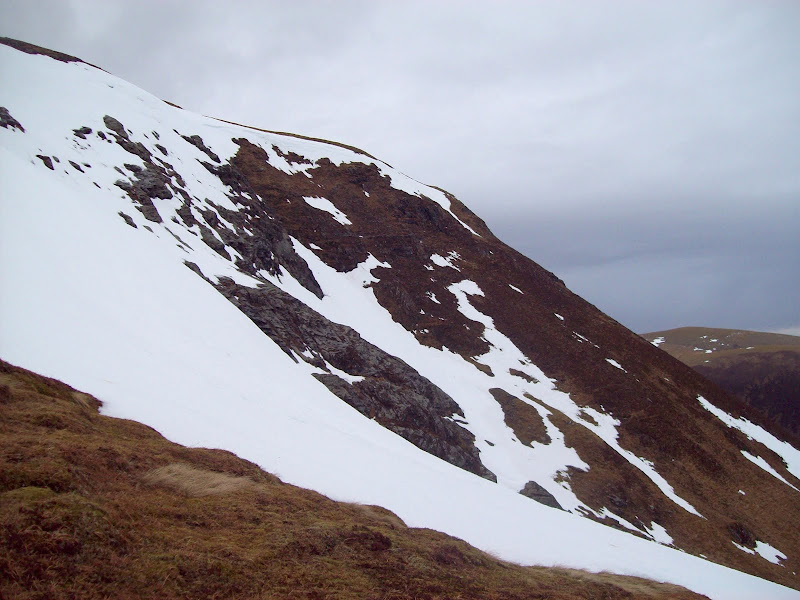 Looking towards the summit: 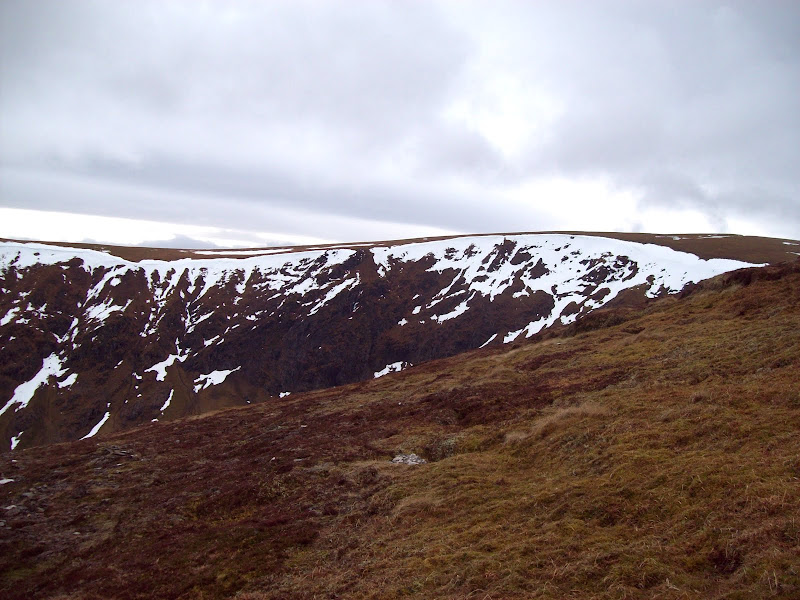 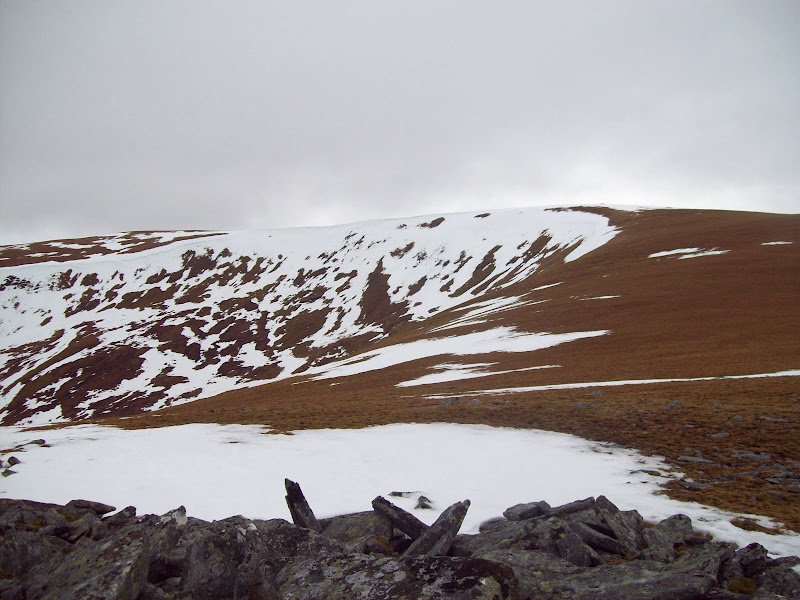 On the way up, I managed to spot a couple of ptarmigan in their winter coats. The wind increased as I reached the plateau, and I could see lower cloud coming in from the west. I could see a couple of groups over by the trig point, but by the time I reached it they had gone, along with the views. I had a quick stop by the summit shelter then got on with the business of getting down. 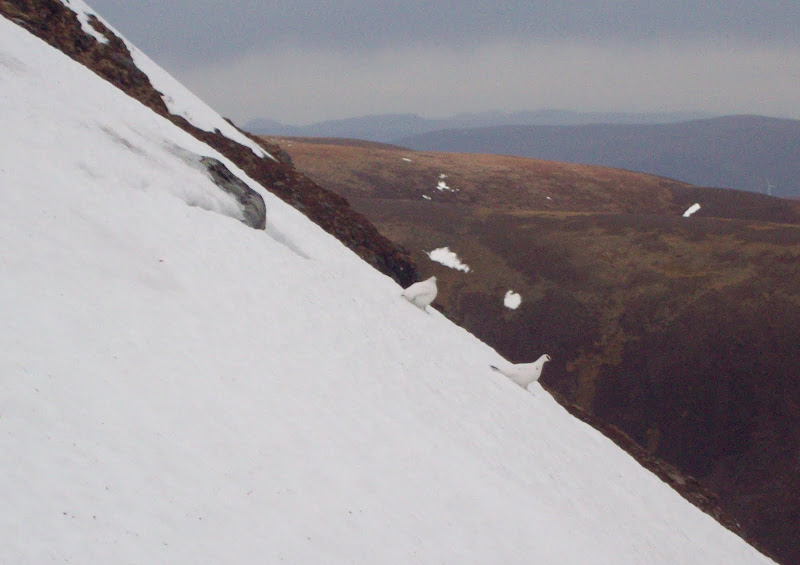 The cloud was up and down as I followed a short section of the normal route, so I could see the remains of some impressive cornices. I soon turned off onto the ridge bounding the south side of Coire na Feola. The high parts of the Glas Leathad Mor plateau have lovely short grass so walking anywhere is a pleasure.

Cornice and An Cabar: 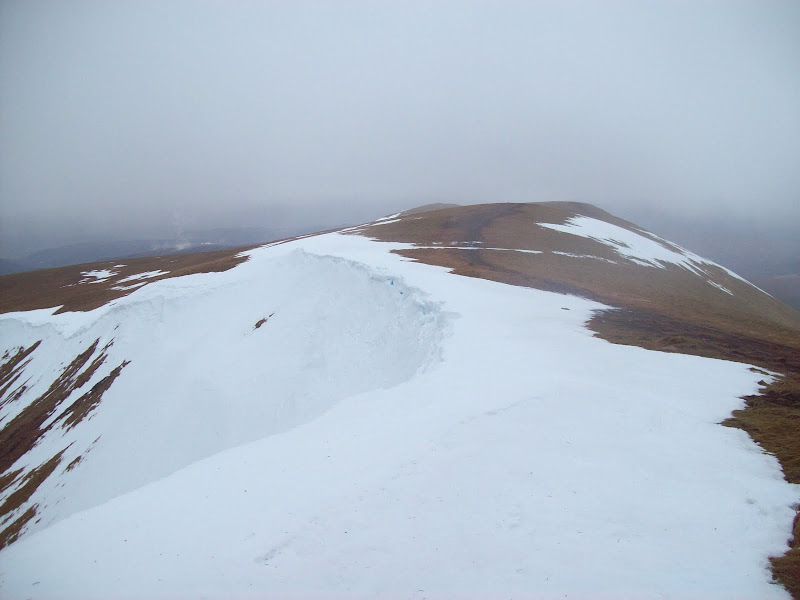 I passed an odd looking cairn that had been built into a shelter (complete with roof) before descending more steeply back towards Meall na Speirig. Again, the ground above 600m was easy going. If the couple of miles between this and the more cultivated land were removed, this would probably be a popular route. 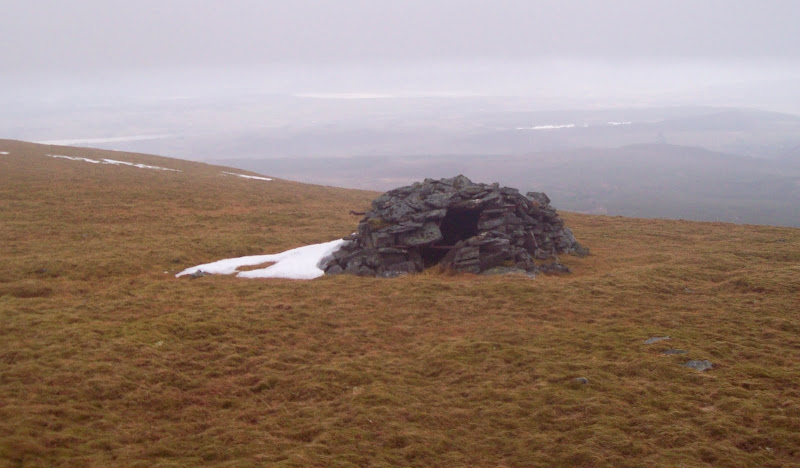 Being able to see the best line through the hags meant that I re-entered the forestry enclosure a little west of where I had left it. This was better as there was a small hole in the deer fence and some boggy quad bike tracks on the inside (still better going than my ascent route). I descended a short way down a fire break before taking another one at 90 degrees on the left. While this let uphill slightly, a right turn shortly after brought me to the stream crossing at approximately the place I wanted to be. From here it was simple enough to retrace my earlier steps up the boggy ruts and onto the good track. 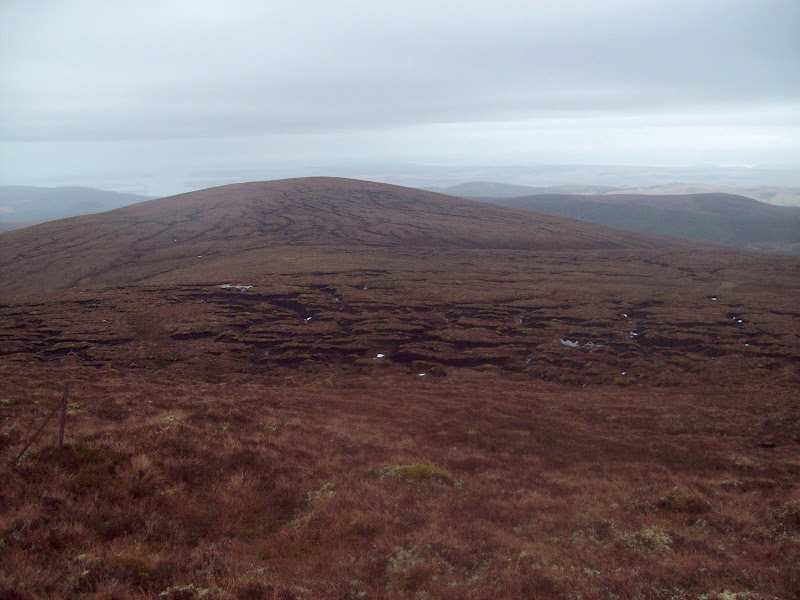 As the cloud had descended a bit, I decided to leave Cioch Mhor for another day. I arrived back at the car a shade over 5 hours after leaving it. Annoyingly, while I had made quite decent time, I had a sluggish feeling that I couldn't shake all day, suggesting the arrival of a cold.

Looking back to Cioch Mhor: 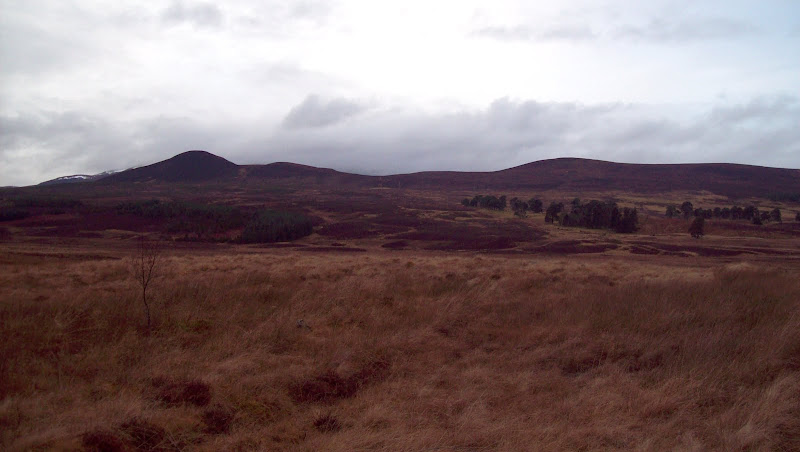 Well worth a look if you don't fancy the normal route up Ben Wyvis, although I'd recommend an approach from the head of Loch Glass over this. Little Wyvis from Rogie Falls is probably the next bit of this area that I'll have a look at.

Ben Wyvis from the house on a better day:

A cracker as always Malky, an unusual route too with some hideous hags to contend with

That's an interesting way up Wyvis. Thanks for posting

Maybe we will try it at some point, how many times can one climb the well-crowded tourist path?

We drove past Ben Wyvis on Sunday (we did some nice cliff walking on Black Isle) and we both wondered how little snow was left up there; looks more like March or April rather than January.

Is Cioch Mhor the site for a newly proposed wind farm? I'm sure I heard a there is a new site near about there.

Thanks all - can't see this route being popular due to the bog, but nice to have some other possibilities on your local hill.

gyles wrote:Is Cioch Mhor the site for a newly proposed wind farm? I'm sure I heard a there is a new site near about there.

I believe so. No signs of any exploratory tracks yet,at least not where I was.

Interesting route Malky - on a good day the views back over the Black Isle and on towards the Cairngorms would be quite something.

I've only ever done Ben Wyvis from Garbat - but that was memorable in that I got caught out by a thunderstorm on the flat & featureless summit 'ridge' - the only feature up there was me carrying two nicely conductive aluminium poles... I've rarely moved so fast on a mountain!