Me and Big Jesper decided to tackle Beinn Mhanach in April, having wisely decided not to tackle it the month before, on the lengthy, strength sapping slog, round Beinn a’Chreachain and Beinn Achaladair. The forecast was looking a bit gloomy for the afternoon, but we set off early in the hope of missing the snow or, rain and when we arrived, the small space for cars on the A82 was all ours. 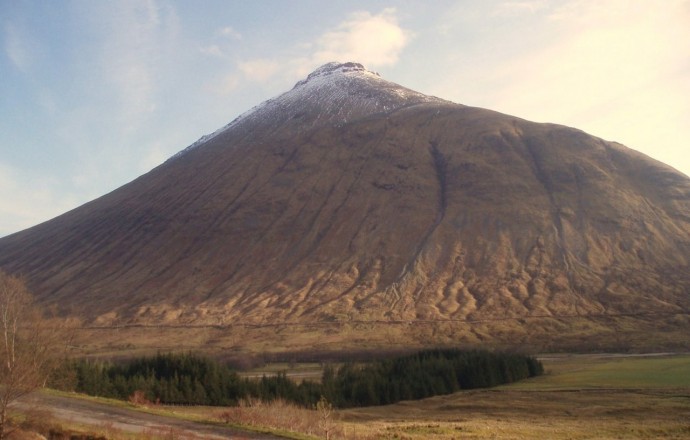 After a quick glance round at the impressive slopes of Beinn Dorain, we set off along the track for the Auch Glen, passing under the viaduct. There might be a temptation just here to follow a track to the right, but it goes nowhere and one should keep left, following by the Allt Kinglas. As reports suggest, the road traverses this river many times – or, is it the other way around? Anyway, we were lucky in that the fine weather since March meant our boots stayed dry, but I reckon a normal April would have necessitated the boots coming off, or wellies going on. One of many crossings.

The route along the glen is interesting and pleasant enough, but doesn’t help gain much altitude and is about five miles before one reaches the real climb. Definitely worth taking the mountain bike if that’s your thing. The track forks to the right about four miles in, not much past the farm buildings at Ais an t-Sidhean and below the now more obvious Beinn a’Chuirn. Follow the right fork about another mile till one reaches a more solid wooden bridge, where one finds several graduated constructions in the burn, to do with the hydro scheme. Having crossed the bridge, it’s a case of hitting the slope and choosing your route northwards, gradually heading more to the east towards, then crossing the fence which runs off the hill. It is quite a steep grind up the hill, but no major problems, turning more to the east, just near the summit, which is pretty unspectacular, though offers some good views of the glen, surrounding munro’s and loch’s. There was a good coating of snow the last hundred metres or so and with cloud moving in, we didn’t stay long to enjoy the freezing temperatures. It didn’t take more than a moment’s deliberation to decline the temptation to have a go at Beinn a’Chuirn and we swiftly made our way back down to the road, to make our way back from where we came. This time we actually managed to pick out the ruins of the home of the Gaelic poet, Duncan Ban MacIntyre having somehow missed them on the way in. The feet were beginning to nip just a little, as I passed below the viaduct, but the end was in sight and well satisfied to have managed this lengthy hike in five and a half hours. To finish with we were honoured by a wee fly past, by a big Hercules. Posing, or another excuse for a breather? Loch Lyon, Lubreoch Dam and Dronuich Reservoir and Dam in the distance. Going under the Viaduct. Fly past by Hercules Along the glen to Ben Lui in the distance.

That's a great report with some very useful fotos.

We're hoping to take "coldwetandhungry" up here at the end of March so it's useful to get some pictures of the bits the guide books don't show.

You did well to catch the Hercules. I don't see them all that often and (while I know it's childish) it's always exciting cause of the tiny chance I'll see some special forces lads jumping out the back !

Thanks, Rudolph. Hope you get a break with the weather and enjoy the hike. Was lucky to get the Hercules, but this was the second one, so was just about to put the camera back in my pocket, having missed the first. Always good to catch something different, but I missed the parachute drop!

'Coldwetandhungry?' I'm sure I've heard that somewhere before!
Cheers.

Rudolph wrote:That's a great report with some very useful fotos.

We're hoping to take "coldwetandhungry" up here at the end of March so it's useful to get some pictures of the bits the guide books don't show.

You did well to catch the Hercules. I don't see them all that often and (while I know it's childish) it's always exciting cause of the tiny chance I'll see some special forces lads jumping out the back !