I'm a bit fed up with January grey skies and feel like a boost of blue skies and sunshine. So I'm going to fast forward to the spring to a report on a sparkling May day in 2008 which I should have written up long ago.

My two labradors came from Labrador Rescue in the north of England. When the woman in charge found out I took them hill walking she asked if they could do a sponsored climb up Ben Nevis to raise funds for the Rescue. I said they could, but they would have to build up to it. So early in 2008 they started their training, first with shorter walks and gradually increasing the distance and harshness of terrain.

We first collected Jack on the memorable date of 5:5:5 so the 5th May 2008 was the third anniversay of adopting him and in that time he'd come on a long way from the lovable hooligan we first met! Moira and I decided it was time to visit the Loch Lochy Munros and drove down to Kilfinnan with Anthony, parking just before the bridge crossing the Kilfinnan Burn. We started along the Great Glen Way, staying on it until our track forked off to the right. It was a lovely gentle start to the day, walking through the forest in the morning sunshine with primroses in profusion growing on the banks to the side of the track. After about 2km there's a right turn into the woods. This is marked by a large rock and there used to be an upturned boot on a post but other walkers report the boot has now gone. This path climbs steeply through the trees and once above the tree-line continues to climb up the north side of the valley of the Allt Glas-Dhoire. This is the old Coffin Road once used by crofters to carry their dead to the cemetery at Kilfinnan. Heading for the bealach (Moira's) At the bealach we decided to head for Meall na Teanga and also that we would take our time and enjoy it as we were quite happy to come back another day to climb Sron a' Choire Ghairbh, which is what we did. We crossed the slopes of Meall Dubh, heading for the broad north ridge of Meall na Teanga. There was one short steep section up a snowy staircase that without crampons required firm kicking in with boots to get a firm hold. Moira didn't fancy the look of it so took a detour round the bottom of the snow patch which had her crawling up steep grass and I suspect might have been worse than the short snow bound section of path Anthony and I took. Views west as we climbed Once on the ridge it was easy walking to the summit. As we approached the cairn there was an endearing view of Anthony looking as if he was reading stories to the two mutts with the magnificent backdrop of Ben Nevis behind. Jack the lad on his 3rd gotcha day! 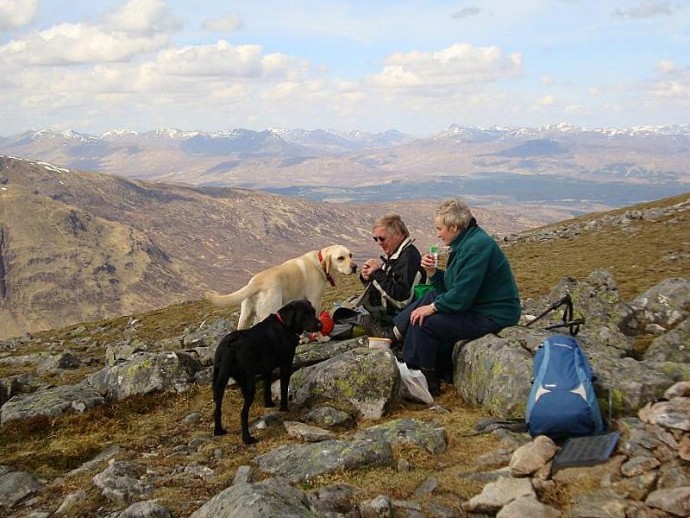 Looking down on Loch Lochy (Moira's) 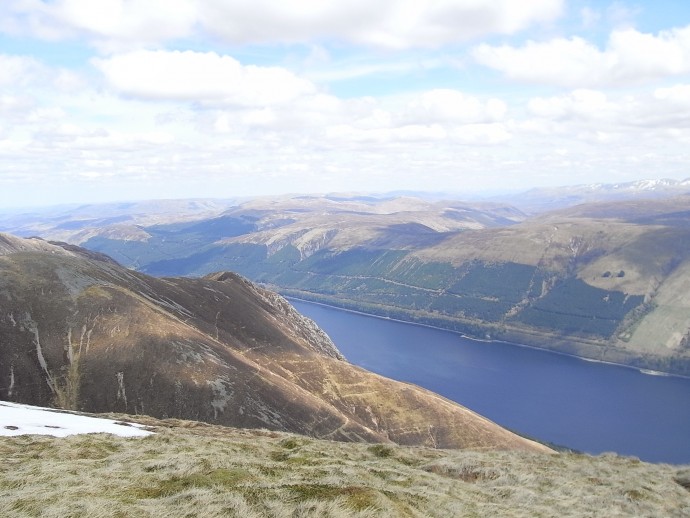 At top of bealach (Moira's) On 22nd August 2009 Moira and I returned with Evelyn and Murdina to climb Sron a Choire Ghairbh. This was an important day for Murdina as she needed to climb a hill that didn't involve a narrow ridge or exposure following her challenging day on the Brothers Ridge a few weeks earlier!

The walk up to the bealach was as before then we turned right up the well made zig zag stalkers' path. The path tops out on a grassy ridge which leads along the edge of broken cliffs to the summit.

Evelyn, Moira and Murdina at summit with the Great Glen visible on the right No worries this time for Murdina It was a good day out with the girls and on the way home we rounded it off very nicely with food at the Scots Kitchen in Fort Augustus!

these are lovely pictures, sunshine views and green, makes you realise summer is coming !

Great report Kathleen and really enjoyed looking at your photos

I'll never forget my first sight of the Great Glen, those high mountains looming over Telford's great work with Ben Nevis in the background. I walked part of the Great Glen way which passes at the foot of these Munros. This was in the days before I joined walkhighlands and didnt know much about official walkways/hills, I just went out to the countryside and enjoyed myself. What surprised me was the number of people who were walking the full Great Glen Way, especially the number of single women I met as until that point I always felt it was unsual for women to go walking alone. I spoke to many of them and most of them asked me the same thing, that is are there any shops/cafes in the area. There arent many north of Fort William but I suggested the Eagle Inn on the water to them.

It's good to look back over old times and relive your memories. I have a cupboard full of photos/CD's of all my past holidays/trips to the Highlands and one day when I have more time I'll sit down and go through them all and remember walks I have done/great sights I have seen. Might come sooner than I realise as my workplace is under threat

Hope you dont mind me rambling on, it's just your photos bring back strong memories of very happy times. Those dogs of your sure know how to pose, just gorgeous

Thanks MrsS. I was needing a bit of blue and green to give relief from all the monochrome and grey!

morag1 wrote:
It's good to look back over old times and relive your memories. I have a cupboard full of photos/CD's of all my past holidays/trips to the Highlands and one day when I have more time I'll sit down and go through them all and remember walks I have done/great sights I have seen. Might come sooner than I realise as my workplace is under threat

Hope you dont mind me rambling on, it's just your photos bring back strong memories of very happy times. Those dogs of your sure know how to pose, just gorgeous

Morag it's great to hear your memories. That's the beauty of this site - that we can share our experiences and memories of this amazing landscape we have!

Yep, the mutts know how to pose!

I'm adding some pics of Anthony to acknowledge all the walks we've done while he's been living up here. He and his wife are moving south and we wish them all the best surrounded by different hills in their new location.

Anthony and Moira at Kilfinnan Anthony and the Five Sisters Thanks for all the map-reading and navigating you've done! And keep walking those hills!

Amazing photos of the dogs...beautiful animals

An absolute cracker of a day for it

These two are a grand day out, and it shows by the smiles you are all wearing

Thanks Circles - I will tell them you think so!

These two are a grand day out, and it shows by the smiles you are all wearing

They are indeed. Cheers SM.