It was almost a year ago since my second climb up a Munro, Beinn Fhionnlaidh which failed miserably – (see “A Ridge Too Far”) and I have hankered to put the record straight for some time, having since managed to climb a dozen or, more since then. Most of these were with guide and mentor, Big Jesper however, having managed a couple of easier solos and been halfway up last January, I had a decent idea of the route and what to expect. The weather was looking good despite recent snow, so it was “all system’s go,” to attempt to redeem myself, Big Jesper being unavailable, saving his powder for next week!
It was an early start, but my insomnia, or pure excitement made sure I was awake and on the road even earlier than scheduled. The darkness began to clear north of Oban, as daylight kicked in, with the snow slowly lighting up the surrounding hills, just adding to my anticipation as to how things would look up Glen Creran. One or, two wee twitches due to the icy road gave a reminder that such conditions can also bring hazards getting to the hills, as well as on the slopes, but I made it safely to the car park at Ellaric, not altogether surprised to have it to myself.
By half eight, I was kitted up and on my way, heading along the tarred road to Glenure Lodge, which was like an ice rink most of the way and extra dangerous as my eyes combed the hills for Beinn Sgulaurd, Fraochaidh and my own target, Beinn Fhionnlaidh. Passing by the barn, I suddenly had this feeling of being watched and fifty feet, dead ahead, was a grand looking stag, eyeing me up with a similar degree of apprehension, no doubt. Who would blink first? Not even the flash of my camera made him budge, but passing through the gate and advancing for a close-up, was enough to make him hesitantly retreat a more comfortable distance for both of us. 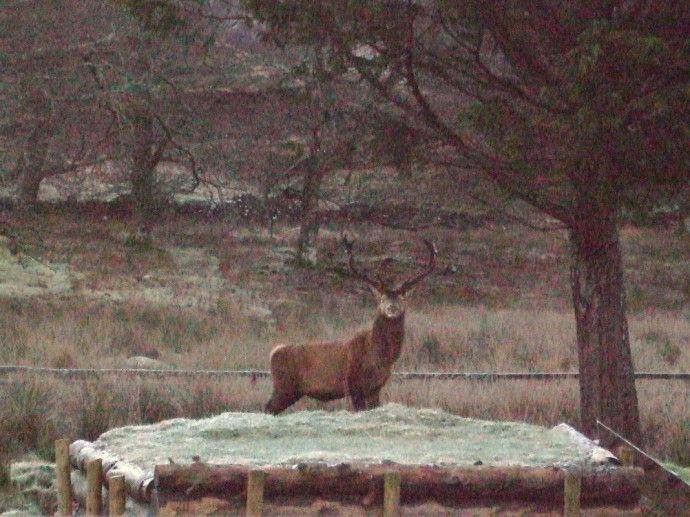 You moving, or am I? From here one joins a forest road for one hundred yards, or so, which crosses a small wooden bridge, then after about another fifty, branches right on a less distinct track, up through some pine and onto the open hill, being some 20 minutes since the start. There is some semblance of a route heading up the hill, but this diverges quickly into less obvious tracks which were soon covered in snow and I think the best way is to follow where your eye tells you looks easiest. Memory’s of my last excursion soon came back, as my feet slid on the grass and snowy mix, stepping up the unrelenting “terracing” which had drained my strength so badly the last time. Anyway, I believed myself to be fitter than last year, so negative thoughts were pushed to the back of my mind, for a while.
I soon noticed that in my rush to get on the hill, I had forgotten to put my gaiters on, which was a convenient excuse to stop for a wee breather and check to see if compass, GPS and map were all making sense. Sometimes, I have found they don’t make any sense – or is it me? It is quite a steep slog up to about 1500 feet and I was becoming more aware of the thickening snow, as my feet crunched deeper and deeper, requiring more stops for photo’s now and again, before it levels out a bit, as one nears the lochan’s at 2000 feet. Here I was able to stop for a drink and enjoy the view down Loch Creran to Mull, Colonsay, Lismore, Morvern, Ben Nevis, the hills of Glencoe, Glen Etive and Cruachan. Just wonderful. I think I was about two and a half hours to this point. From Lochan Cairn Deirg one heads a more northerly for several hundred metres and the going changes from grassy slopes, to steeper, rough terrain of boulders and rock which also requires full concentration and leaves many a deep snow-filled hole to sink into, as I seemed to manage quite frequently. It was about the 2500 feet level where I crashed and burned last time and I must admit I looked round ruefully, thinking back to then as I was again finding it hard going. 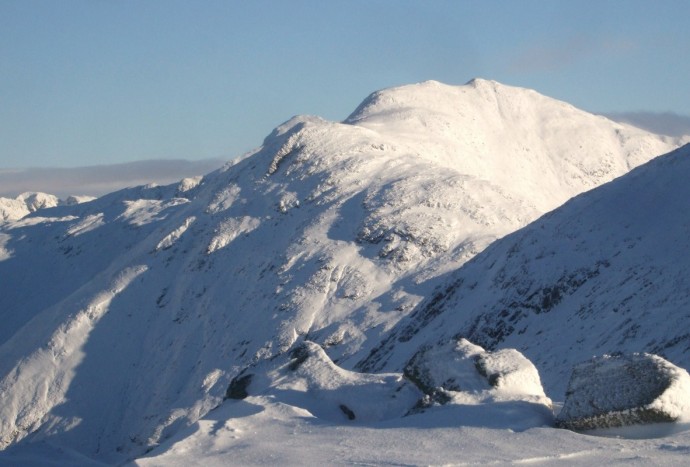 Anyway, Big Jesper told me it was only about another twenty minutes, or so to the top from here, so I pressed on, full of confidence. This confidence slowly began to ebb, as I lurched knee, or waist deep at times into the snow, or found another rather distant ridge, or summit looming, notably around Coireachan Odhar. I will need to speak to him, severely, about such misinformation! Some of Aonach Eagach Ridge and Clachaig Gully.

At last I saw something resembling a man made structure on top of another summit and pressed on knowing now I would make it after all, having taken about three and a quarter hours, to cover the four and three quarter miles to the top. There were no signs of anyone else heading up from either direction, so it looked like I had the hill to myself. I would have liked to spend longer at the top where there is a small shelter and trig point, to savour the views, take more pics and have some grub, but it was way too cold to dilly-dally and I was soon retracing my steps to lower levels. It still took some time for my hands to warm up to allow me to enjoy a warm coffee and some food which was very much needed to replenish fuel levels. Towards summit cairn and trig point. After a few more falls into deep snow, I was soon back at the lochan’s, then sliding on the snow and grass as I steadily progressed towards the lower slopes and welcoming road back to the farm. The only hazard remaining was to keep my feet on the still icy road and back to the car in just under the six hours, well satisfied with my efforts and looking forward to seeing if my photo’s could do justice to the great views I had enjoyed.
(As you can see, I'm not too sure of my hills, so any corrections most welcome.) Some of AE ridge. 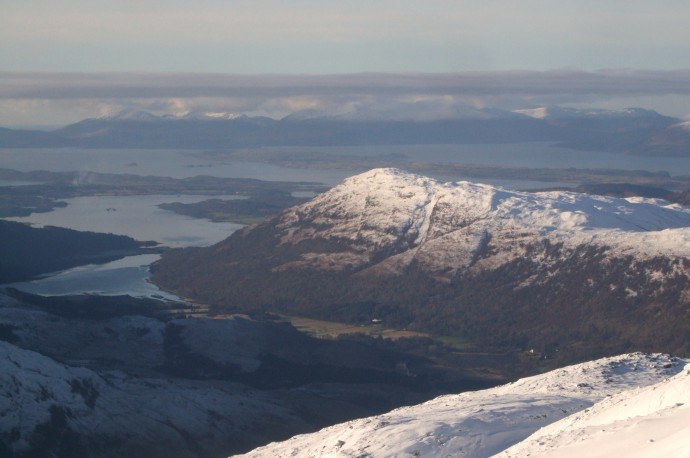 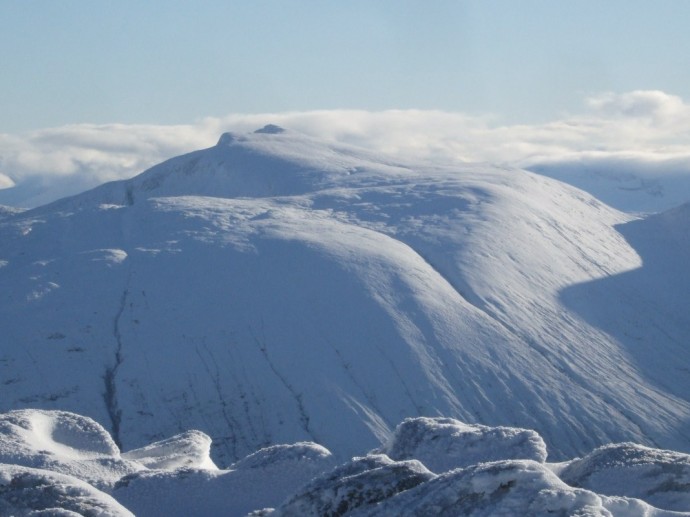 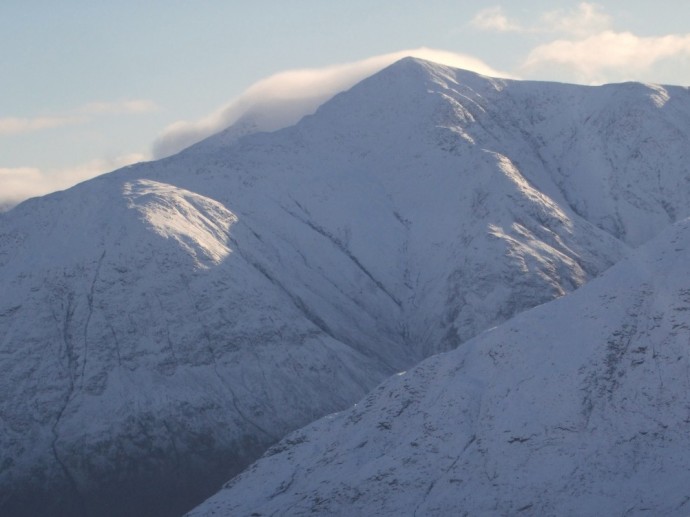 ? Towards Beinn a'Bheithir, I think? What an unforgettable day that was. Very jealous!

Well done on getting it done second time around. Fantastic scenery, looks like a cracking day you had

Now thats the kind of weather we all dream of

Those views must have made all the pain worthwhile! Your story of the stag reminds me of a similar close encounter I had with a magnificent stag at the foot of Ben Hope.

We were locked eyeball to eyeball and I was quite relieved when he eventually decided he wasn't for hanging around any longer!

What a wonderful day out!

As you can see, I'm not too sure of my hills, so any corrections most welcome.

I think you have them all right, except that "Ben Lui" is actually Beinn Eunaich.

This is a brilliant site for working out what you are looking at: http://www.udeuschle.selfhost.pro/panoramas/makepanoramas_en.htm

Hi, thanks all for kind comments and link to 'panorama.' Lucky with the weather though was able to 'cherry pick' this week and was well worth the effort.

Think you got a better day than we got last year Jimbo. Need to get the fitness levels back up or you'll be leaving me behind. Hopefully weather will be good for Chno Dearg.

Photos really do justice to what must have been a tremendously satisfying day out - they help remind that after the grey days there's something spectacular up there.