Unfortunately my injuries from falling last time out were worse than I first thought, meant having to wait a month before venturing out again.
With my leg strapped and some companions my first trip was (balloch) station to (helensburgh) station by (ben) bowie. Not sure the clay bits of the new path running down to Helensburgh are going to last. one of my companions on coffin road

Next I was in Largs with 3 friends for a bog hopping circuit of Gogo water. Wet, pathless moorland but great views out to Cumbrae, Arran, & Bute on inward leg 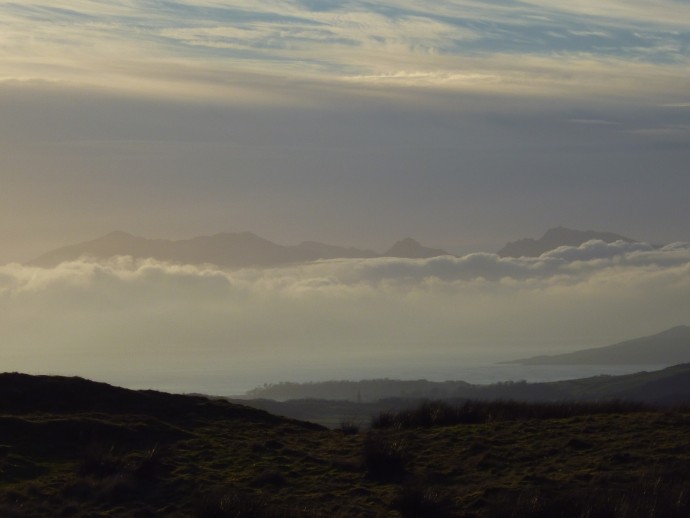 arran above the clouds Shoulder, ribs, leg, held out so time to try an overnight trip alone with an easy exit just in case. Winter had come back.
Caught train to Corrour, put up tent near Loch Ossian & walked out through surprisingly deep snow to Leum Uilleim, a great viewpoint. This would have been my 3rd ascent but as I reached top of ridge clag came down, & wind got up so turned back to tent.
The next morning was cold & dull, had a real struggle leaving sleeping bag - with hours to spare before the train I plodded up Beinn na Lap, noticed 2 people following in my footsteps.
When I spoke to them back at the station realised I had met one of them before, it was his old canvas rucksack covered in sewn on badges that I recognised first. A few years ago we had bumped into each other on Cuillin ridge & had a memorable day in the sun scrambling along part of it - a real gentleman with lots of experience. Both him and his friend are in their seventies, amongst other things he has now done 10 rounds of the munros, his friend has only managed 5... back to Loch Ossian sunrise on a dull day some light as we wait for train

Just out of curiosity, what's the snow like around Loch Ossian?

Backpacker - the snow was powdery & knee deep & weather worse than forecast. Its long hard walk over the Bealach Dubh in soft snow especially with wind against so would give yourself lots time - you never know it might firm up.
I don't want to unduly worry you ! but 4 people died on that path in dec 1951 in a storm - you can read whole story in 'The Black Cloud' by I D S Thomson -a really informative book .

I think I've packed appropriately for the conditions, plenty of thermals

I'll see how it goes, at least I've got the bothy to stay in if I think I'm running low on time

Stunning really enjoyed that, great area. That guy on the quad is scary like, like an old soviet stormtrooper....

I really want to go and do Leum Uilleim in the snow but the lack of a return train in the afternoon is putting it on hold. Great effort from you and it really is a wonderful area.

Backpacker, I applaud your endeavour. However, when I did the 3 Munros from Corrour station and came back towards Loch Ossian, it took me 8 hours in August. With a lot of deep snow, you may well be floundering for a considerable period of time. Good luck.

Some nice shots there Dunrig - hope you're feeling better.

kevsbald wrote:Backpacker, I applaud your endeavour. However, when I did the 3 Munros from Corrour station and came back towards Loch Ossian, it took me 8 hours in August. With a lot of deep snow, you may well be floundering for a considerable period of time. Good luck.

Some nice shots there Dunrig - hope you're feeling better.

I'm not doing any of the Munro's, just a straight walk to Dalwhinnie via Culra Bothy.

If it gets too bad then there's no harm in turning round and going back the way. Just waiting game and seeing what happens

What a great report and photographs are fantastic. Great meeting someone you met few years ago to hope still to be in hills when i am in 70s. Hope your rehabilitation continues to improve big style.